We all know the popular narrative of progress: Traditional gender roles are receding, and men are helping out in the domestic realm. Gone are the days of a rigid division of labor. Now that women represent nearly half of the American workforce, men are chipping in with household chores … right?

Wrong, at least according to recent research suggesting women still do more than their fair share of the housework. And if that fact doesn't offend your basic sense of equality, there are plenty of other reasons to be concerned.

Some experts say the unfair distribution of housework detracts from the productivity of the whole U.S. economy. Others note uneven household labor correlates with a greater gender pay gap, which remains strikingly apparent among American workers.

To study this subject in greater detail we surveyed 993 people who currently live with their partners. We asked them about how they tackled various tasks around the home and analyzed how this division of responsibilities correlated with relationship satisfaction.

Our results reveal how essential equal effort can be in sustaining love among live-in couples. To find out which partners are truly doing more chores and how this domestic division affects their happiness, keep reading.

There's no denying it: Our numbers attest to a sizeable gap between the time male and female respondents spent on various household tasks. 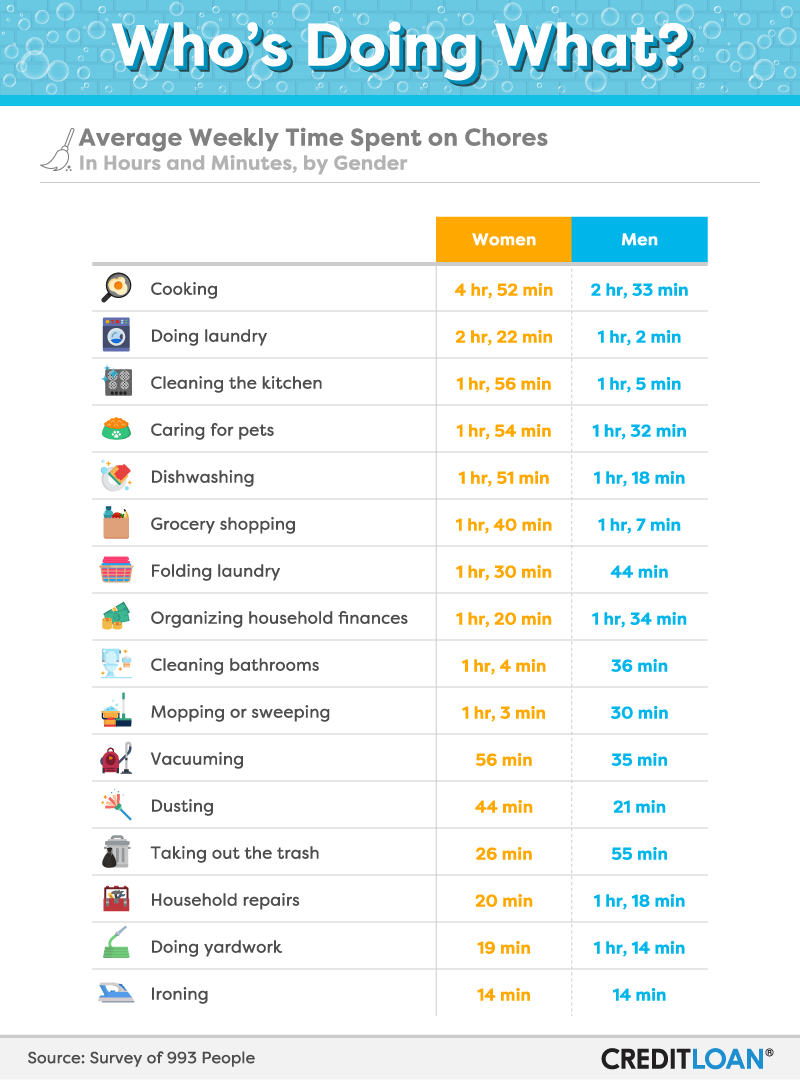 This trend was particularly pronounced concerning some forms of work: On average, women spent more than twice as much time doing laundry than men. Additionally, some chores where the gap was greatest had a special financial significance. Women spent almost two and a half more hours cooking each week, an effort that can save couples hundreds they might otherwise spend on takeout.

Men did seem to emphasize certain responsibilities, however. On average, men spent more time than women organizing household finances, attempting household repairs, and taking out the trash. Plus, they allotted about an hour and 14 minutes a week to their lawns, a particularly American preoccupation. 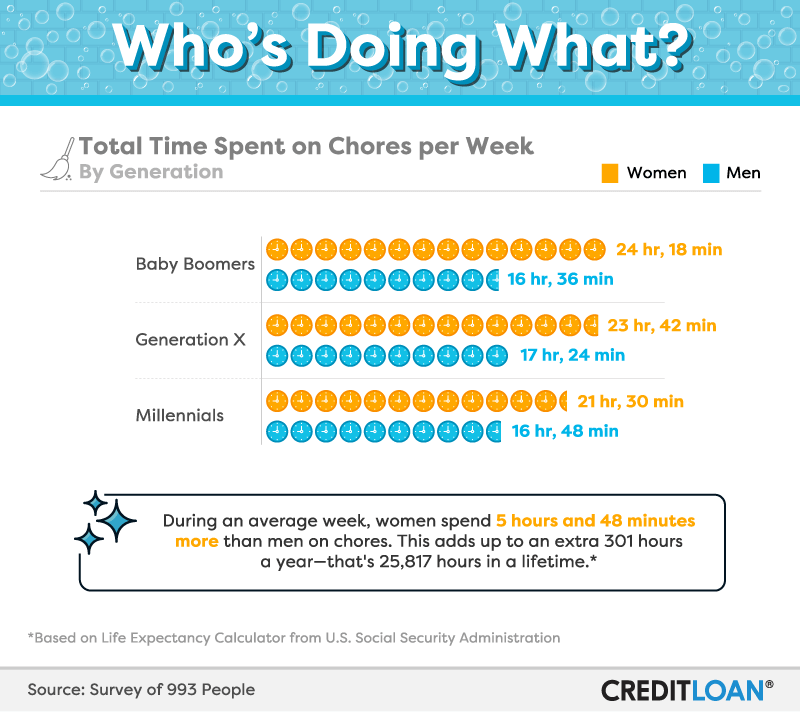 While men in all age groups spent roughly the same amount of time on chores weekly, millennial women spent significantly less time on housework than older generations. This finding could be interpreted quite positively: Workforce participation among young women is at an all-time high, meaning less time to spend on housework. According to our data, however, it doesn't appear their millennial male peers are assuming more housework as a result.

Across all of the generations though, we found that during an average week women are putting in nearly six hours more on chores than men. Across an average woman's lifetime, this could add up to more than 25,800 additional hours of housework.

Each couple's needs differ, so no single formula for divvying up tasks will keep all partners comfortable. That said, we studied how the habits of participants who felt satisfied with their relationships differed from those who felt otherwise to define some keys to sharing responsibilities happily.

Our findings indicate happy partners need not evenly share all household duties. For example, more than three-quarters of satisfied participants said just one person handled chores such as household repairs and cooking. 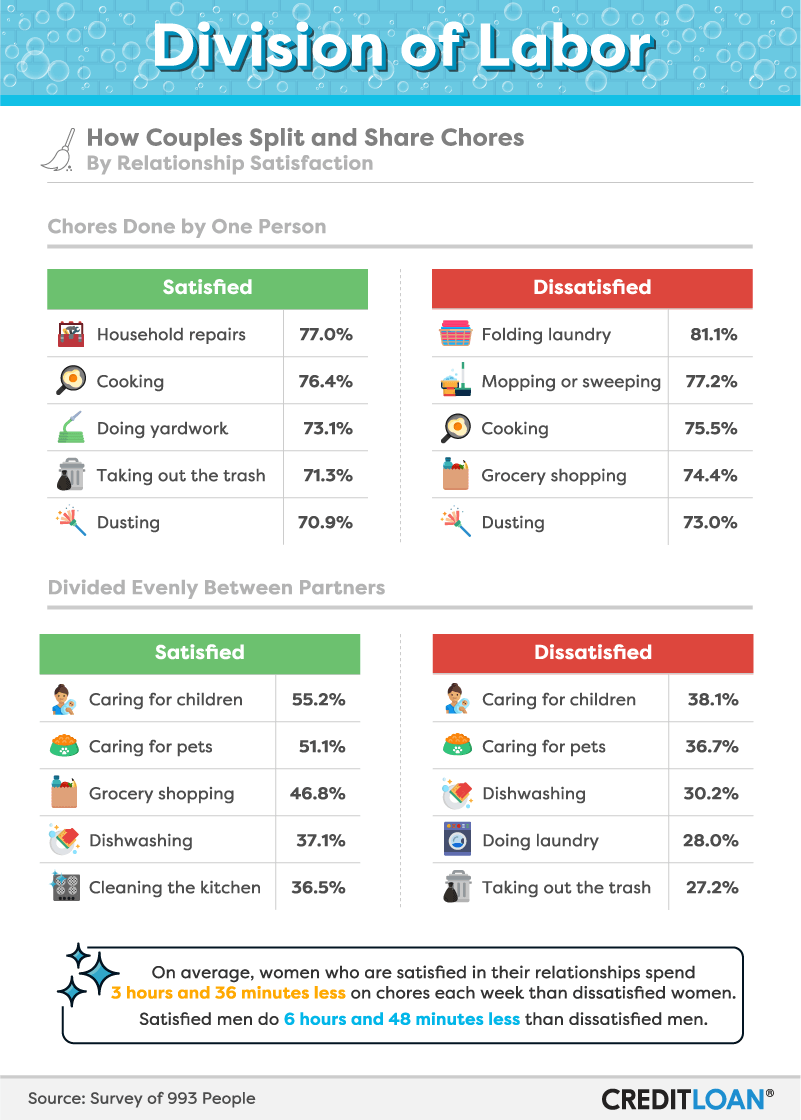 But these data suggest the particular chores couples elected to split evenly may matter most. Satisfied couples were more likely to split child care responsibilities evenly, a pressing concern for many parents given the soaring costs of child care in recent years. They were also more likely to share grocery shopping equitably, whereas that was usually a solo mission for unsatisfied couples.

It's worth noting respondents who spent less time doing chores tended to be happier in their relationships, and this trend held true for men and women alike. Satisfied women passed 3.6 fewer hours each week doing housework than their unsatisfied peers. For men, the weekly gap was even larger: Satisfied men spent nearly seven hours less on housework than unsatisfied men.

Teaming Up on Chores

Thus far, our results indicate splitting up some household tasks evenly could improve relationship satisfaction. But what if happiness depends less on an even split of responsibilities and more on tackling tasks together?Do satisfied couples bond when they collaborate on chores side by side?

According to our figures, satisfied individuals spent more time working on household chores with their partners– four and a half hours more, in fact. Perhaps the shared focus inherently brings couples closer, or maybe household tasks simply give them more opportunities to talk.

Cooking alone has its benefits, but doing it together can spice up a relationship. Our respondents who were satisfied in their relationships spent far more time cooking with their significant others. Pet care was another area in which satisfied couples spent much more time together – nothing says mutual commitment quite like cleaning up cat litter together.

Although men with and without kids spent roughly the same amount of time on chores each week, children seemed to increase the burden of non-child care household tasks for women. That means having kids may exacerbate the labor gap between men and women at home. Over a mother's lifetime, this gap could add on an extra 24,955 hours of chores. 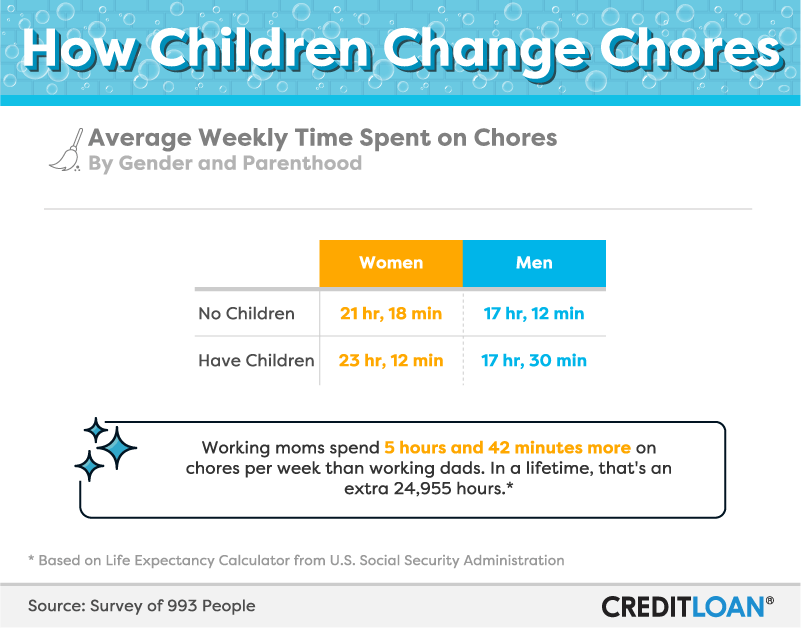 The largest disparity emerged around cooking and laundry, with working mothers spending more than twice as much time as working fathers on these tasks. Economists have suggested these challenges might explain why women still earn less than men in many industries: It's tough to take top-paying jobs that require long hours when you have hungry kids waiting at home. 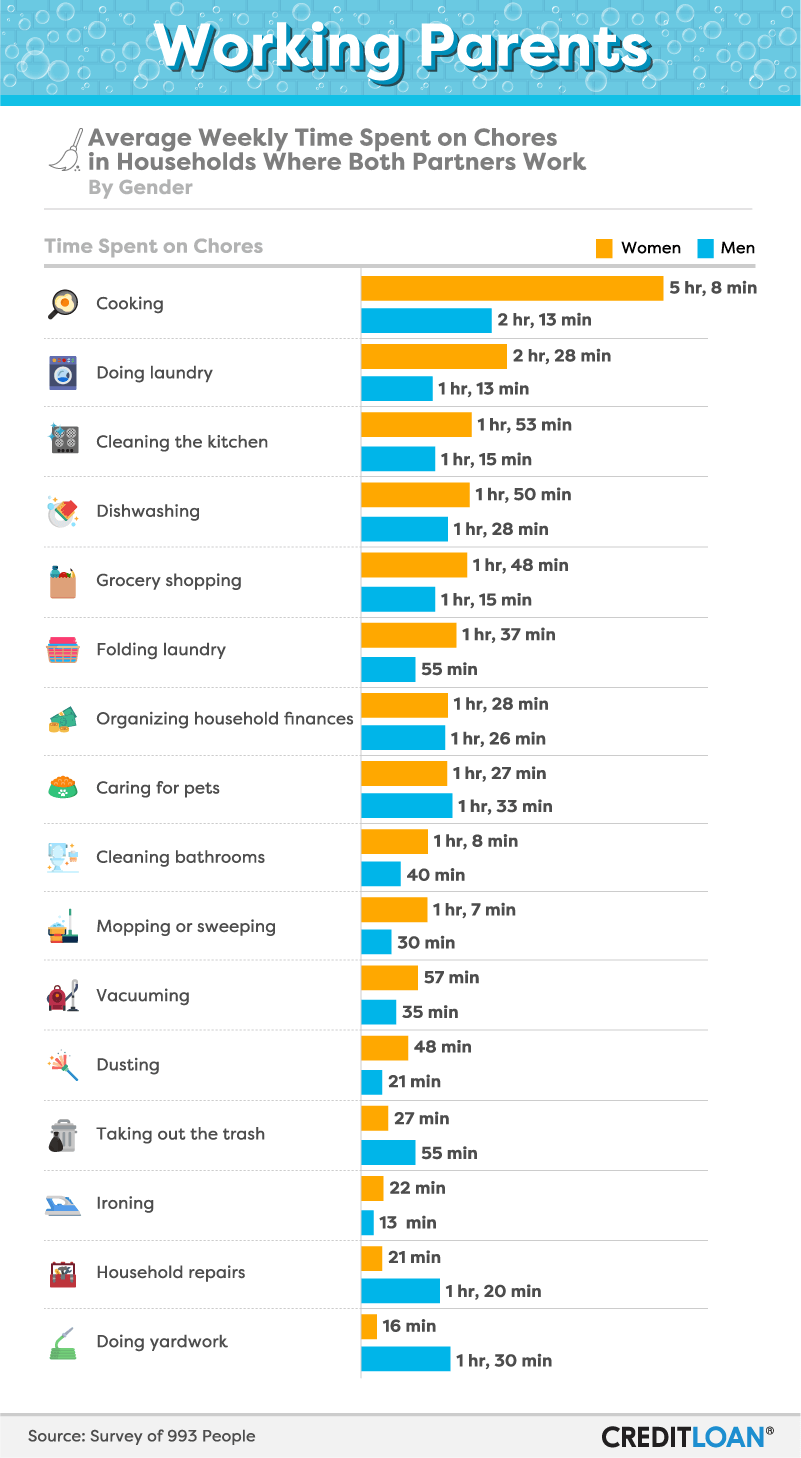 Additionally, our figures indicate gender norms can persist in homes where both parents are working. Working men spent more time than working women on some chores traditionally viewed as masculine endeavors: lawn care, home repairs, and taking out the trash.

But men are more eager than ever to pitch in. Between 1965 and 2015, the hours men spent on childcare tripled, increasing to seven hours per week.

Chores Each Gender Does More

If our data suggest women do more household work than their male counterparts, it seems many of them know it. When asked about a number of specific chores, at least a third of female respondents said they did more than their partners. 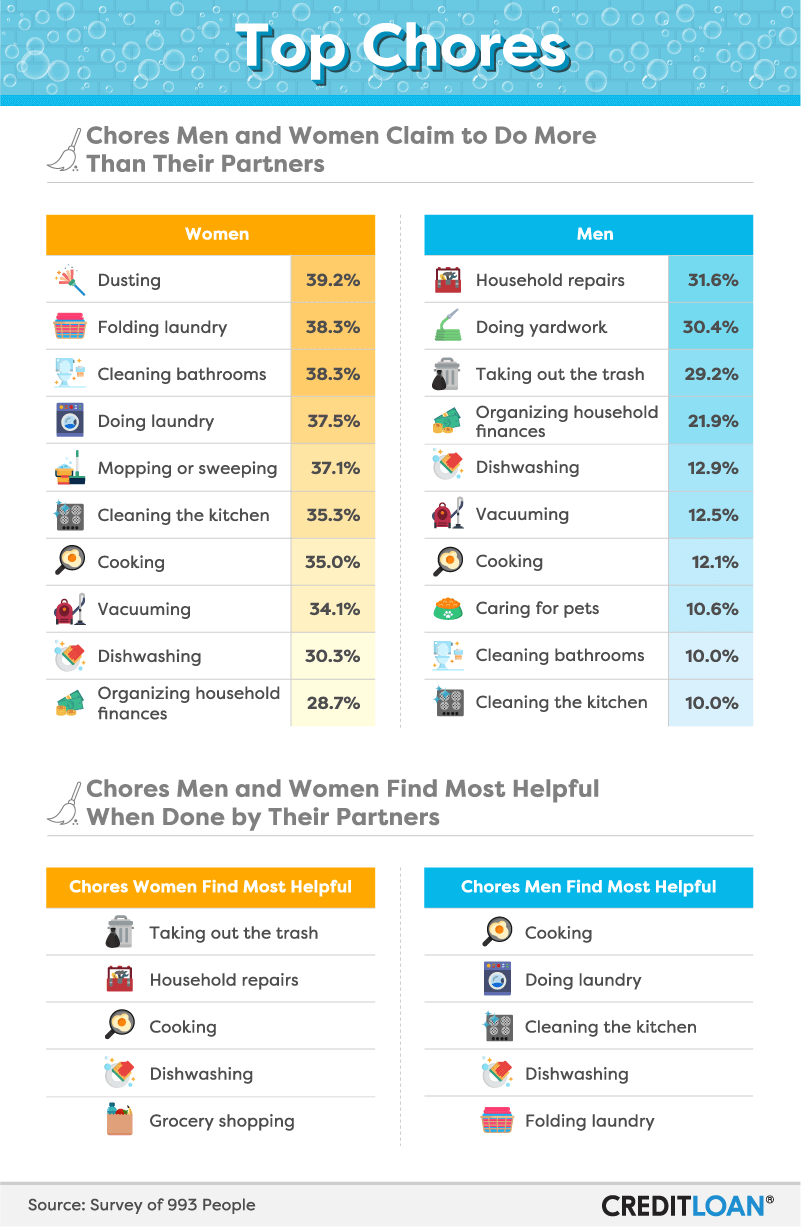 This was particularly true regarding washing and folding laundry and various cleaning. At least 35 percent of women said they did more mopping, dusting, and cleaning of the kitchen and bathrooms than their partners.

Conversely, men were most likely to say they tackled traditionally masculine chores more often than their partners: Over 30 percent said they did lawn work and home repairs more frequently. A significant number also claimed to take out the trash and handle family finances more often.

Although these divisions of labor may seem tied to old norms, they actually reflect each gender's reported preferences. Women found it most helpful when men took out the trash and made household repairs. Similarly, men were most appreciative of their female partners cooking and washing laundry.

If general relationship satisfaction isn't enough of an incentive to share the household load, a more specific perk might do the trick: Sex. Does the frequency with which couples make love reflect their teamwork on chores? 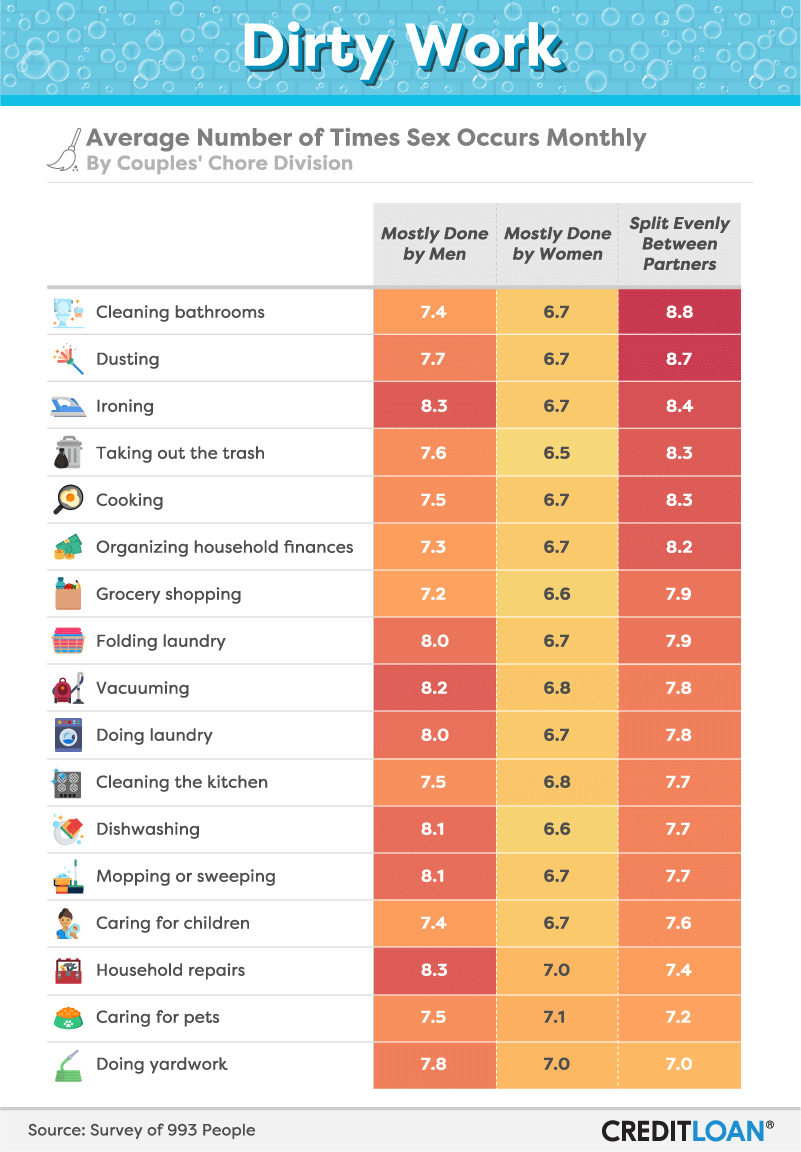 For quite a few of the household tasks on our list, sharing responsibility correlated with higher sex frequency. In fact, couples in which both partners contributed to cleaning bathrooms and dusting had sex nearly two more times each month than when women bore the full burden.

There were a few exceptions, however – full collaboration doesn't necessarily lead to more love connections: Men who said they usually handled cleaning tasks like laundry, mopping or sweeping, vacuuming, and washing dishes had sex slightly more than couples for whom those responsibilities were shared, and in couples where women mostly did them. The same held true for more traditionally masculine chores like lawn care and household repairs.

Our data indicate that when women bear the full burden of many household chores, intimacy wanes. But offering even a little more help around the house can go a long way: When men pitch in and tackle cleaning chores solo or at least take turns with their female partners, the frequency of intimate encounters tends to increase.

However you and your significant other determine to divide your household chores, transparency will help you steer clear of resentment. Our findings indicate an unequal distribution of tasks often results in dissatisfaction, but couples need not endure their frustration in silence.

If you find yourself unhappy with the proportion of working you're doing, don't hesitate to broach the subject with your loved one. If your goal is to communicate rather than accuse, you may find making adjustments easier than you imagined.

Financial matters also require couples to communicate openly, and uncertainty about managing money can lead to some stressful situations. At CreditLoan.com, we're here to supply the knowledge you'll need along your journey to financial freedom, so you and the ones you love can achieve security.

Further explore our site for expert recommendations on a range of financial subjects, from the best credit cards and personal loans to credit monitoring and debt consolidation. As you build a bright future for your family, let our team at CreditLoan share some of the labor.

Using Amazon's Mechanical Turk, we collected responses from 993 people who were in a relationship, engaged, or married and cohabitating with their partner.

To determine the difference women spend in chores over their lifetimes, we found the average age of all female participants (36.1 years) and the average age of employed women with children (34.8). Using the U.S. Social Security Administration's Life Expectancy Calculator, we used these ages to determine life expectancy and the total difference in the number of hours these women might spend on chores compared to men in an average lifetime.

To determine relationship satisfaction, we asked participants to rate how satisfied they were with their partners on a scale of 1 to 7, with 1 being completely dissatisfied and 7 being completely satisfied. Responses of 1 to 3 and 5 to 7 were grouped, and neutral responses of 4 weren't included in the visualizations.

To account for outliers in the reported hours spent on chores, we excluded records that were greater than three times the standard deviation, plus the mean, for each chore. Individuals whose responses were incomplete or inconsistent were excluded from the study.

Our data on employment status does not include the number of hours that employed people work. In "Working Parents," we included people who were hourly, salaried, or self-employed workers with children, and whose partners were similarly employed. It is possible that our data on the number of hours employed people spend on chores would be different if we had more detailed information on the hours per week both partners worked. Further studies could explore this relationship.

Feel free to share our findings and graphics with your own audience for noncommercial purposes. When you do, please link back to this page to attribute us appropriately. Just as with chores around the house, giving a little credit for a job well done can make all the difference.