While the average U.S. household has more than $16,000 in credit card debt, people are more likely to talk with those in their lives about politics and sex than to bring up their bills. So just how taboo is the topic of money and debt in conversation, and why are so many Americans unwilling to open up about their financial concerns to friends?

To break the silence, we polled 1,000 employed people to see where debt and finances rank among the most uncomfortable conversations. We wanted to know if gender, age, and annual salary impacted how willing people were to discuss money matters with close friends. Read on as we decode their responses. 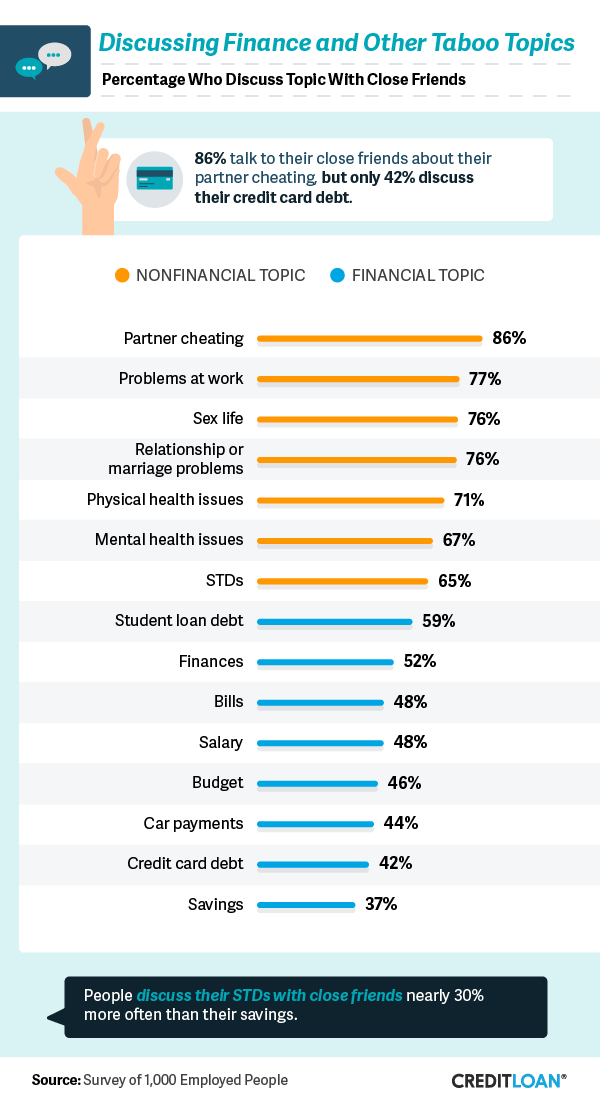 Getting into the personal details of your relationship, work, or sex life doesn't always mean oversharing, but it can make your friendships even closer if discussed properly.

More than 3 in 4 people regularly opened up to their close friends about their sex lives, which can help alleviate feelings of stress or anxiety toward things they may not understand. While 71 percent of people discussed their physical health, 67 percent discussed mental health, and 65 percent opened up about STDs. However, there were topics of conversation that were more off-limits: money matters.

The taboo of discussing financial topics isn't just limited to close friends either. One study found the insecurities adults face about money as parents can be transferred to children as well. It can be uncomfortable at first, but experts suggest discussing money with children can provide one of the building blocks of future financial success. 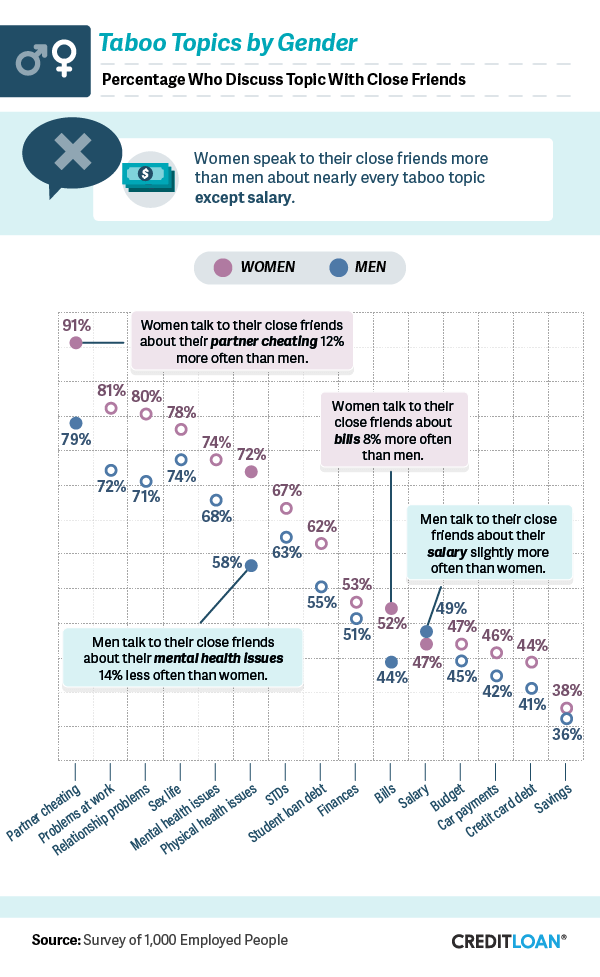 While not always accurate, men are sometimes thought to be bad at discussing their feelings. Whether it's about relationships, issues at work, or even sex, experts suggest men are less likely to share what bothers them as a result of shame or alienation.

While 49 percent of men had conversations about salary with close friends, only 47 percent of women said the same. According to one report, women may earn less than men for the work they do in the same jobs or industry – not because men are favored but because women often don't negotiate for the money they deserve. Less than 1 in 3 women negotiate their salaries at all, equating to roughly $2 million in lost revenue for the average woman over her lifetime. 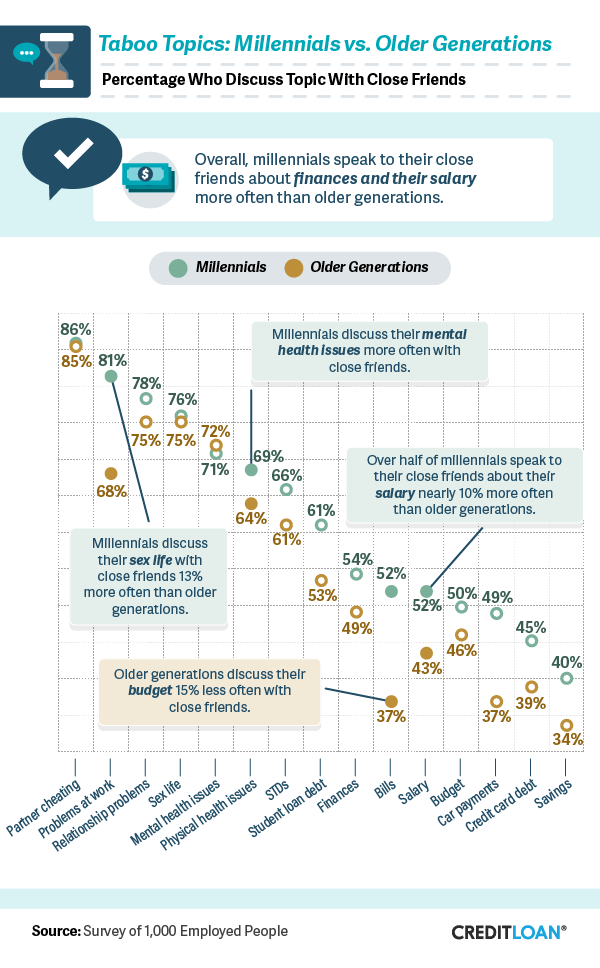 While talks about salary, debt, and budgeting have been considered taboo for quite some time, that may finally be changing with the newest generation of earners and spenders.

Having graduated during the recession and accumulating more student loan debt than any generation before them, millennials are particularly well-versed in the hardships of financial conflict. Despite this struggle, millennials have become the most financially literate generation since Americans who survived the Great Depression. 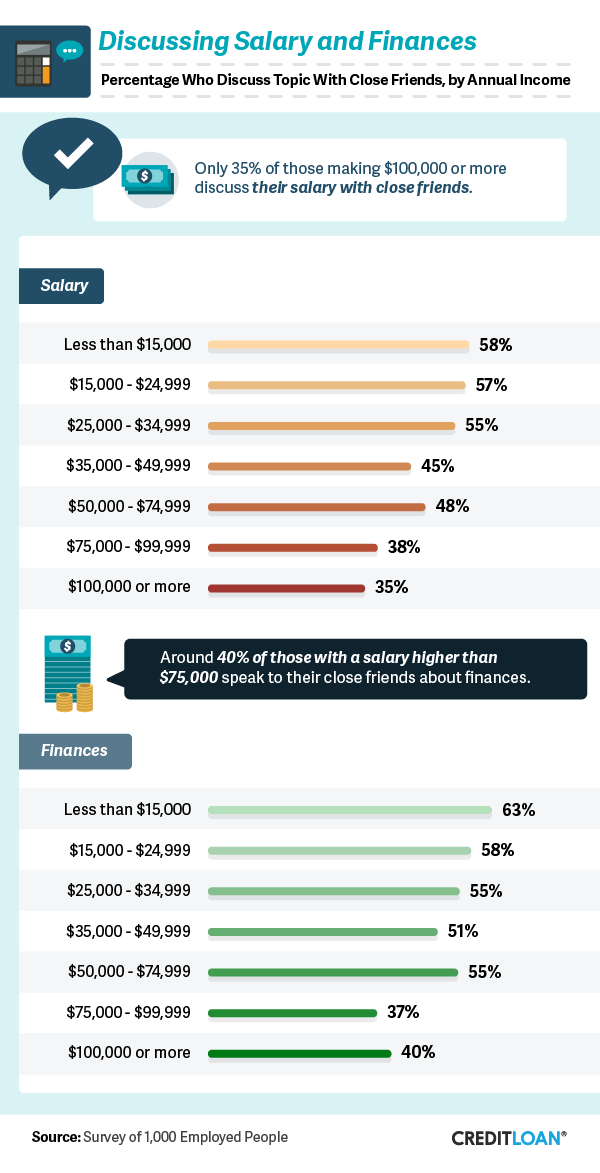 When it comes to money, the more of it you have, the less likely you may be to talk about it with close friends. In fact, debt and poor saving tactics don't just affect Americans living paycheck to paycheck. One in 3 Americans earning $75,000 or more admitted to only having enough funds to bounce from payday to payday.

People earning less than $15,000 annually were the most likely to discuss their salary with close friends. At 58 percent, they were more open with their salary than those earning less than $25,000 (57 percent), less than $35,000 (55 percent), and less than $50,000 (45 percent). These figures took a sharp turn among the highest earners polled, though. Thirty-five percent of people earning $100,000 or more discussed compensation with their closest friends, and only 40 percent discussed finances at all.

According to one expert, becoming more transparent with our cash (among both low- and high-end earners) can provide a source of empowerment to people of every economic status. If navigated correctly and with the right intentions, monetary conversations like these can help encourage people to negotiate a better rate as they make their own financial decisions. 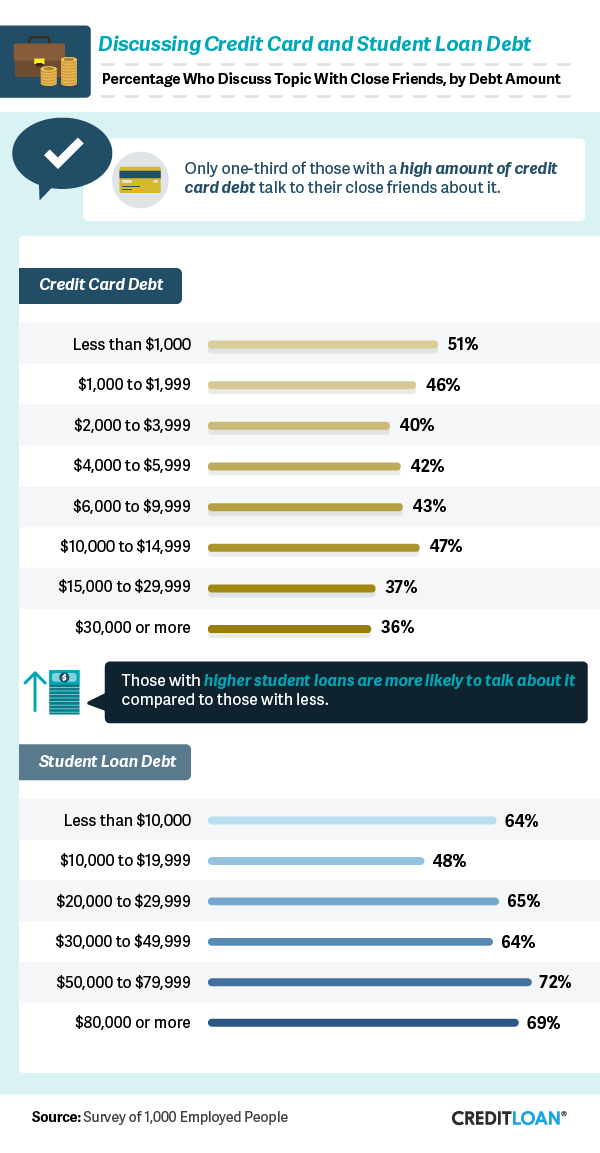 The cyclical nature of debt can make it feel like a never-ending struggle. Every year, Americans spend more on debt including car payments, mortgages, and credit cards, and those growing numbers can have an extremely negative impact on the way families manage their finances. One in 4 people have no savings at all (retirement or otherwise), and nearly as many have to postpone retirement to make up for the missing funds.

While credit cards can be a powerful tool for some, they can also be tremendous financial hurdles for others. Unlike student loans where people who owed nearly the most were more likely to talk to their friends, respondents who owed more in credit card debt were the least likely to share their struggles with their closest companions.

Credit card debt may be so taboo that even people with the lowest amounts still aren't comfortable bringing the matter up to their friends. Only 51 percent of people with less than $1,000 in credit card debt talked about it with close friends, a rate that fell between 37 and 36 percent among those with $15,000 or more in debt.

When it comes to building a successful budget to overcome debt and establish quality money habits, brutal honesty could be your best friend in understanding where your money is going, what your priorities are, and how you can spend smarter to achieve those goals. Student loan debt may be a more acceptable topic of conversation among participants, but both can be equally as difficult to repay, and credit card debt typically carries a higher interest rate.

In 1922, author Emily Post declared it was vulgar to bring up financial affairs in public. Decades later, people are more comfortable talking about their relationship problems, sex lives, and sexually transmitted infections than they are about credit debt or establishing a budget. While these trends are starting to give way to younger generations, some of the most common types of debt (including credit cards) are still a taboo topic among people who may need the most help.

At CreditLoan, we're committed to breaking the silence and helping people like you understand their everyday financial issues as much as possible. By providing clear and practical tools that everyone can use, CreditLoan is your go-to resource for everything from your first mortgage to consolidating loans. Get the funds you're looking for and advice you need at CreditLoan.com.

We surveyed 1,000 employed people in the U.S who were recruited from Amazon's Mechanical Turk. Approximately 52% of participants identified as female, 48% male, and less than 1% did not identify with either gender. Participants ranged in age from 18 to 74, with a mean of 37 and a standard deviation of 10.52.

You don't have to keep our study a secret among close friends. We'd love to see the results of this project shared with your readers for any noncommercial use. Just make sure to include a link back to this page, so our contributors earn credit for their work too.