Before you rush to change the channel out of embarrassment, consider this.Those "guilty" pleasure shows could be good for your health. Watching TV can help you feel less stressed, promote healthy living, and even inspire creativity.

Feeling better about binge-watching old episodes of "The Real Housewives" yet? To help shed some light on some of the top guilty pleasure TV shows, we asked over 1,000 men and women for their take on reality television and more. We asked them to open up about what they really love about some of the most popular TV shows today, why they're embarrassed to watch them, and how many would lie about their top choices. 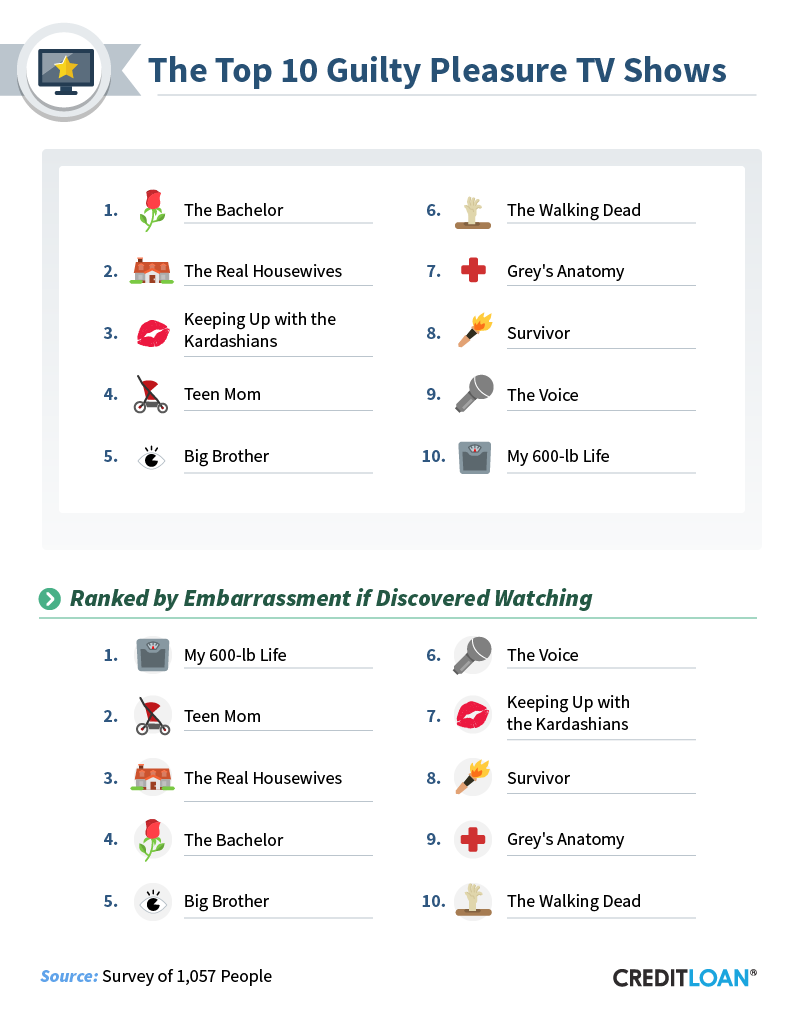 When asked about their favorite guilty pleasure TV shows, people knew exactly whom to hand their final rose to: "The Bachelor." And they aren't alone. Arie Luyendyk's season finale of "The Bachelor" drew an estimated 7.8 million viewers – the same number of reality-indulging watchers as Nick Viall's finale a season prior.

For fans of the show, waiting for "The Bachelor" to come around every season isn't the only way to partake in what has evolved into a reality TV franchise, either. "The Bachelorette" lets fans root as a female contestant picks from her own pool of suitors, while "Bachelor in Paradise" provides the in-between entertainment featuring castoffs from either series' past seasons. 2018 even introduced yet another spinoff: "The Bachelor Winter Games" to coincide with the 2018 Winter Olympics.

Not feeling "The Bachelor" or need even more reality adventures to scratch your guilty pleasure TV itch? "The Real Housewives" and "Keeping Up with the Kardashians" also ranked among the top 3 guilty pleasure shows according to people polled. With baby drama galore, roughly 2.2 million people have tuned in every week to see the Kardashians, Jenners, and everyone in between.

Still, just because a show qualifies as a guilty pleasure doesn't mean people are entirely embarrassed to be caught watching it. The honor of most embarrassing shows went to "My 600-lb Life" and "Teen Mom" instead. "My 600-lb Life" might not be as glamorous as watching the Kardashians every week, but some episodes are more popular. An average 1.8 million people watched it in January 2017. 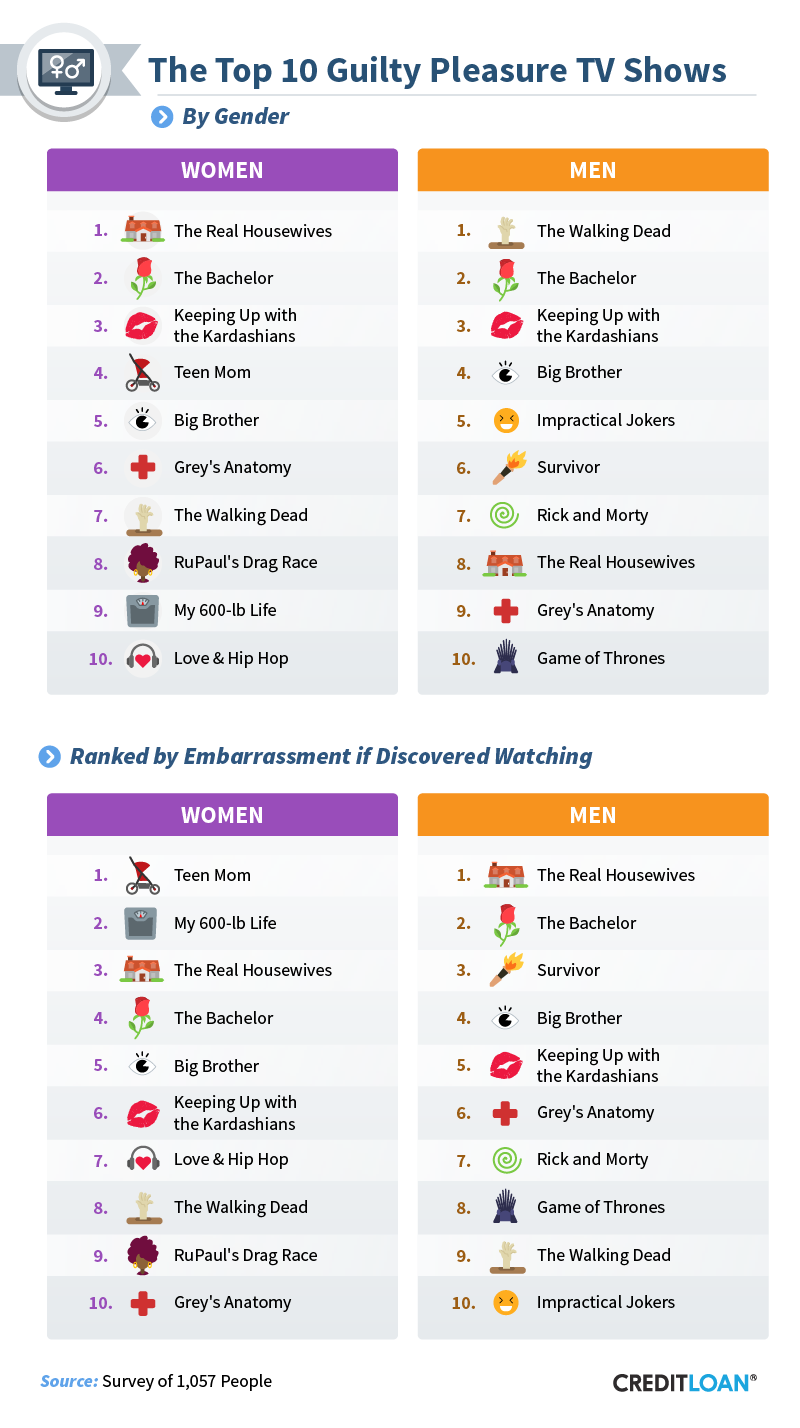 Men and women historically have different tastes, and this is also true in terms of television shows. When asked about their favorite guilty pleasure TV shows though, we found their responses weren't so far apart after all.

Looking for options you can watch without feeling too embarrassed? Even though both men and women ranked "The Bachelor" among their most embarrassing TV indulgences, some fans have managed to make an interactive game out of their viewing experience. Fantasy leagues for this reality TV romance have gotten so popular among fans looking to pick the winners, losers, and drama queens (or kings) that ABC has even gotten into the action.

Unfortunately, those same options don't exist for shows like "Teen Mom" or "The Real Housewives," which ranked among people's most embarrassing trash TV.

Reality TV didn't start with survival-style expeditions or a quest for love. In fact, reality TV premiered in the '70s with the PBS program "An American Family." As a precursor to shows like "Keeping Up with the Kardashians" and "The Real Housewives," "An American Family" was the direct inspiration for MTV's "The Real World" some 20 years later. 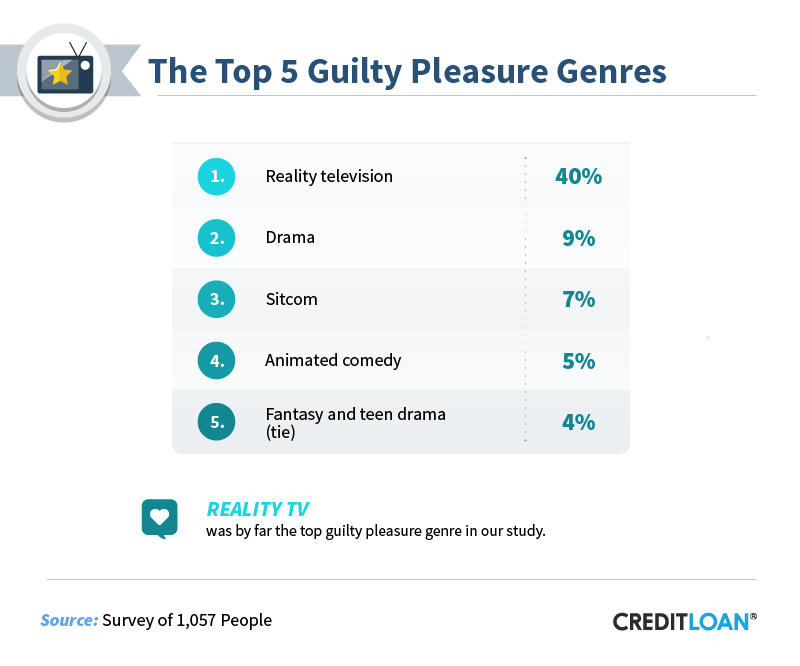 Today, watching celebrities live their lives seems to be just as irresistible. Men and women agreed reality TV was still their favorite guilty pleasure genre. Whatever your taste, there's sure to be something for everyone too. In 2015, there were 750 reality shows available on cable TV – and roughly 350 of those were newly premiered.

While the actual "reality" behind reality TV is up for debate, studies suggest it isn't watching other people getting humiliated on national TV that entices so many people to tune in – it's their sense of empathy. Rather than watching people embarrass themselves for sport, the more people enjoy a particular show, the more likely they are to suggest their friends and family might enjoy participating too.

So what keeps people tuning in season after season for shows like "The Bachelor," "Big Brother," or "The Real Housewives," which notoriously recycle the same plot points year after year? The entertainment, of course. 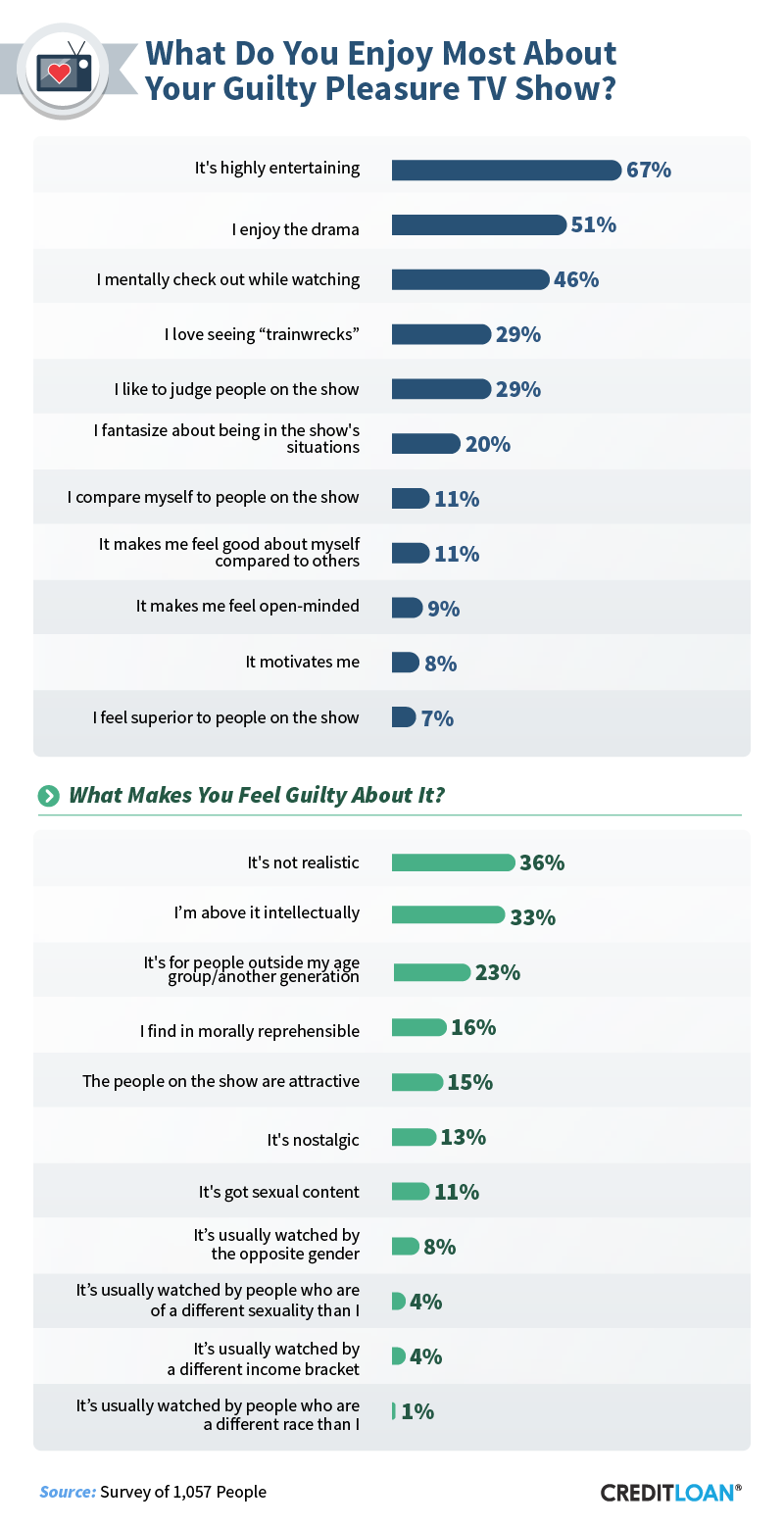 While 36 percent of people admitted they felt guilty watching some of their TV shows because they weren't at all realistic, more than 2 in 3 said they watched anyway because the shows kept them entertained.

More than half said they enjoyed the drama, and 46 percent said they liked getting to mentally zone out while watching. According to some experts, while watching too much TV can be a big drain on time, shows that make you laugh or have educational themes can be good. Even if you've already seen it before, reruns of your favorite guilty pleasure show are not only linked to lower levels of stress but also higher energy as well.

Despite these perks, there are still reasons why a person might feel embarrassed for tuning in to some of their favorite shows. More than a third admitted they felt "above it" intellectually, and another 23 percent said watching shows targeted to an audience outside of their age group embarrassed them.

Keeping Up With Our Friends and Family

With so many new and recurring TV shows to pick from, it's entirely possible to get burnt out on programming, even if it's a show you really like. Having so many options, particularly with new post-cable platforms like Amazon, Netflix, and Hulu, can cause what some researchers have dubbed "TV fatigue." 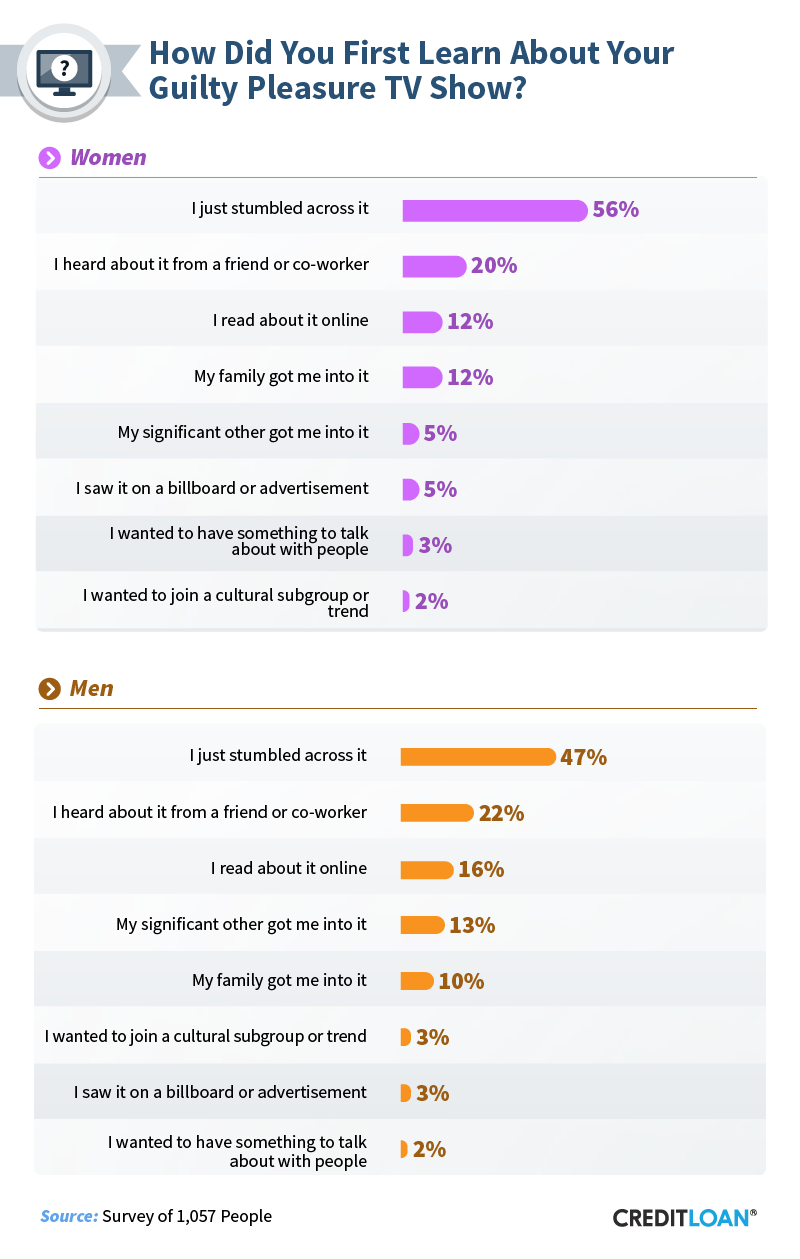 Word of mouth also plays a role in learning about new shows. Twelve percent of women said they learned about now shows from their family and 11 percent from friends or co-workers. Thirteen percent of men watched the shows their significant other got them hooked on – more than twice the percentage of women who said the same.

Who Do We Watch With?

People aren't just talking to each other about their favorite guilty pleasure TV shows – they're also watching them together. 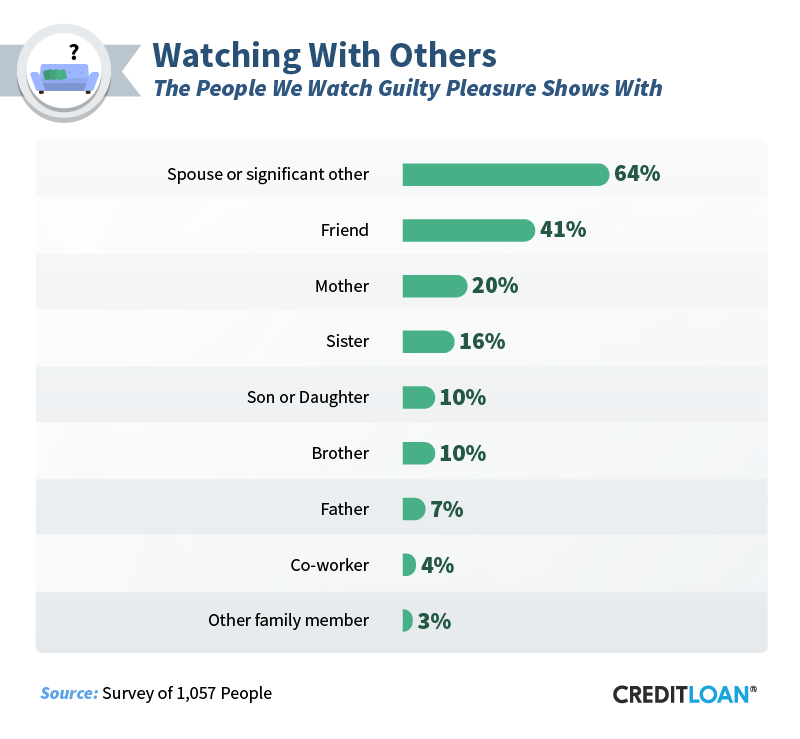 Sixty-four percent of men and women watch these guilty pleasures with their spouse or significant other. Studies have shown watching TV is actually a social experience for most people. Couples can use TV shows for better bonding or emotional engagement. More than 2 in 5 people watched guilty pleasure shows with their friends, and 1 in 5 watched with their mother.

While watching with family was a relatively popular experience, men and women were nearly three times as likely to watch shows like "The Bachelor" or "Keeping Up with the Kardashians" with their mother rather than their father.

Despite the overwhelming popularity of the same reality TV shows and dramas, people still felt guilty enough to lie about them – especially to their bosses.

More than half confessed they'd lie to their bosses or managers about their favorite guilty pleasure TV shows. While programs like "My 600-lb Life" or "Teen Mom" may not have a strong intellectual vibe on the surface, you could be surprised to learn your boss watches the same shows. 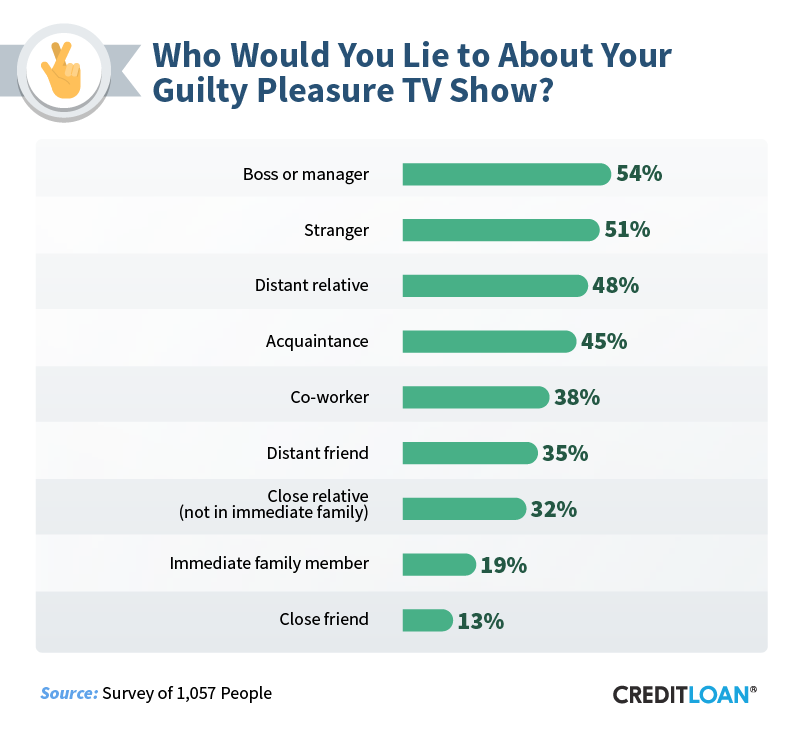 Most people consider their guilty pleasure TV shows "trashy" entertainment, but binge-watching episodes of reality TV shows or your favorite medical drama might not be so bad after all. Men and women had similar opinions on their favorite guilty pleasure shows, and many confessed to watching these programs with their significant other. While most didn't want their bosses or distant relations to know just how much they enjoyed these shows, just as many got new recommendations from friends, family, and even partners.

We may not have suggestions on what you should consider watching next, but at CreditLoan, we have something even better: expert financial guidance for everything from credit cards to student loans. You don't need to sign up for a reality TV show to get access to these practical financial tools or answers to some of the most common questions about credit and loans.

We collected 1,057 survey responses from people via Amazon's Mechanical Turk. Forty-five percent of participants were male, and 50 percent were female, while the remaining 5 percent did not identify. Participants ranged in age from 18 to 82, with a mean of 37.6 and a standard deviation of 11.7.

Respondents reported 364 TV shows as guilty pleasures. The 10 most common shows were reported 219 times, with the most popular guilty pleasure TV show ("The Bachelor") being reported 43 times.

Participants who did not identify their gender were excluded from gender-level analysis. Data were not weighted, and no statistical testing was performed, so the claims listed above are based on means alone. As such, this content is purely exploratory, and future research should approach this topic more rigorously.

Don't be embarrassed if your guilty pleasure TV show made its way onto our list. Feel free to share the results of our study with your readers for any noncommercial use; just make sure to link back to this page so they can see our research in its entirety.