It's no secret: Maintaining a loving, healthy relationship takes hard work. But navigating couplehood with financial woes and burdens is all the more challenging – and some of the most contentious money issues are clandestine financial endeavors and secretive wasteful spending. A staggering 1 in 20 Americans have admitted to opening a bank account or acquiring a credit card with their partner none the wiser.

In fact, financial wrongdoing and dishonesty between couples are so common that it recently earned a moniker: financial infidelity.

We decided to survey over 1,000 Americans in relationships lasting three months or longer to get to the core of the issue: How does one's frivolous spending affect their partner? How many of their arguments hinge on income and debt? When money is burning a hole in someone's pocket, where are they actually spending it?

Our survey sheds some light on these pressing questions. Budgeting proved to be the most explosive kindling for arguments, but wasteful purchases also caused fights between couples.

If you're in a relationship, how closely can you relate to these fiscal conflicts? Read on to see what you can learn about American couples' highs and lows in the joint financial domain. 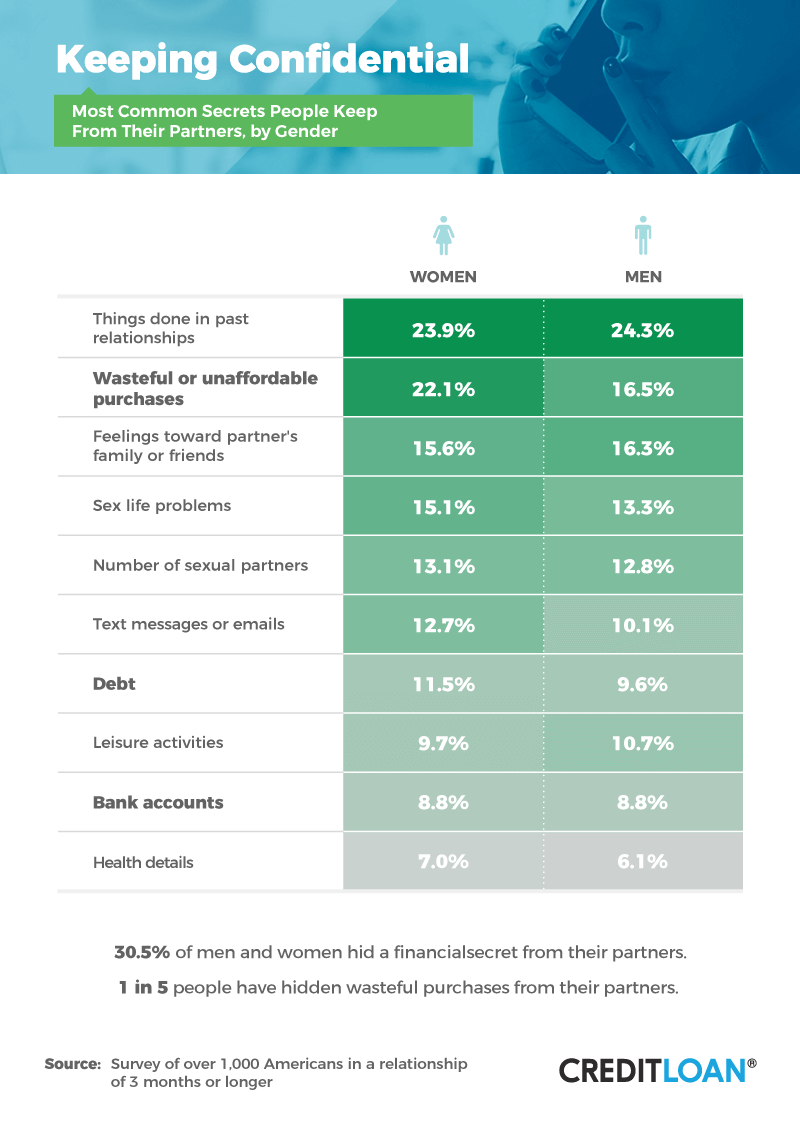 In nearly every relationship, no matter how intimate, secrets and mysteries remain. According to our survey, about 24 percent of men and women preferred to keep their past relationships in the past. While some suggest keeping this under wraps until at least the third date, bringing up exes can be so fraught with conflict that there are entire how-to articles written about navigating the conversation. To avoid jealousy and hurt feelings, some couples might choose to implement a "don't ask, don't tell" policy.

Wasteful purchases, however, stole the second spot when it came to relationship secrets. More than 22 percent of women admitted to hiding wasteful spending from their partner, but only 16.5 percent of men admitted to keeping the same secret.

It's important to note that for some, this grand fudging of numbers doesn't necessarily stop with an overpriced scarf or shiny new Xbox console. Undisclosed debts are often shrouded in fear or shame, but coming clean about poor credit scores, squirreled-away inheritances, and even gambling or shopping addictions can be an opportunity to improve communication.

According to our survey results, 28 percent of respondents said they found out about their partner's secretive wasteful spending. If marriage is in the cards, these survey participants – and others on similarly shaky ground–might want to skim this list of essential questions to ask before combining finances.

Engaged couples and newlyweds might want to keep up this conversation after they say "I do" as well – financial discussions should be happeningat each stage of the relationship. Heightened communication combats misunderstanding and lowers the chances of one partner making a purchase the other might not believe to be wise.

No matter which way you slice it, men and women spend and save differently. What looks like an essential purchase to one person could be a complete waste of money in someone else's eyes. According to our survey, this can often be a point of contention and misunderstanding for couples, especially those made up of different genders.

Men and women barely overlapped in the categories their partners believed they wasted money on. Women thought their male partners blew precious cash on dining out (34.1 percent), alcohol (29.8 percent), snacks or energy drinks (28.6 percent), and collectible or hobby items (27.5 percent).

Conversely, 45.2 percent of men perceived their female partners as wasteful in the areas of clothing, shoes, or purses, cosmetics, soaps, or lotions (39.2 percent), home decor (33.5 percent), and restaurant meals (27.8 percent).

But not all of these common categories have the same extravagance when it comes to cost. In the case of women's spending, home decor was the main money pit. According to their partners, the average cost of women's home decor purchases was $596. Fashion items were not far behind at $341.

Men also had little trouble shelling out their own money to invest in fun. Women said men's most wasteful video game system purchases averaged $367. But men seemed to waste the most on their hobby or collectible purchases at an average cost of $602. To put this into perspective, some collectible (and nostalgic) toys can cost upward of $1,000. Hobbies that require specialized gear, like scuba diving or restoring motorcycles, can also add up quickly.

If it's not obvious by now, knowing how to budget is a major gateway to success in every relationship. Without that financial balance and understanding, negotiations can often break down.

We wanted to learn more about the issues couples most frequently argued about, and budgeting unsurprisingly took the cake. Both genders reported chart-topping incidences of financial squabbles: Nearly 20 percent of women and 16.5 percent of men said budgeting was among the most frequent fight topics in their relationship.

Income was another commonly reported point of contention. Nearly 17 percent of women said they argued with their partner about income-related issues either often or always, and 11.2 percent of men had a similar experience.

With debt, couples yet again experienced elevated levels of arguing. Things were a bit less tumultuous from the male perspective, with 9.3 percent of respondents fighting this out frequently. Meanwhile, 13.1 percent of women reported arguing about debt with their partner either often or always.

It is unsurprising, then, that financial issues are understood to be a top predictor of divorce. According to our survey, income, budgeting, and debt are all prominent and inflammatory topics within intimate relationships. While wasteful spending trailed farther behind, it still made an appearance: More than 7 percent of women reported going head-to-head over their partner's frivolous purchases frequently, while men did the same at a rate of 8 percent.

The only thing that is sure to complicate matters further is not how much money is being spent, but whom the bulk of it belongs to. Women who made more than their partners reported higher incidences overall of arguing about budgeting, income, debt, and wasteful spending than women who were not the breadwinners in their relationships.

The most oft-argued topic was budgeting: Among women who made more than their partner, 24 percent experienced disagreements in this domain often or always. The same went for the 17.5 percent of men who were higher earners.

Income was the second-greatest stressor for higher-earning women, causing 18.5 percent to frequently clash with their partners, compared to just 10.4 percent of breadwinning men. Just over 16 percent of female partners who earned less reported fighting frequently about income, compared to 12.7 percent of lower-earning men.

"We Need to Talk" 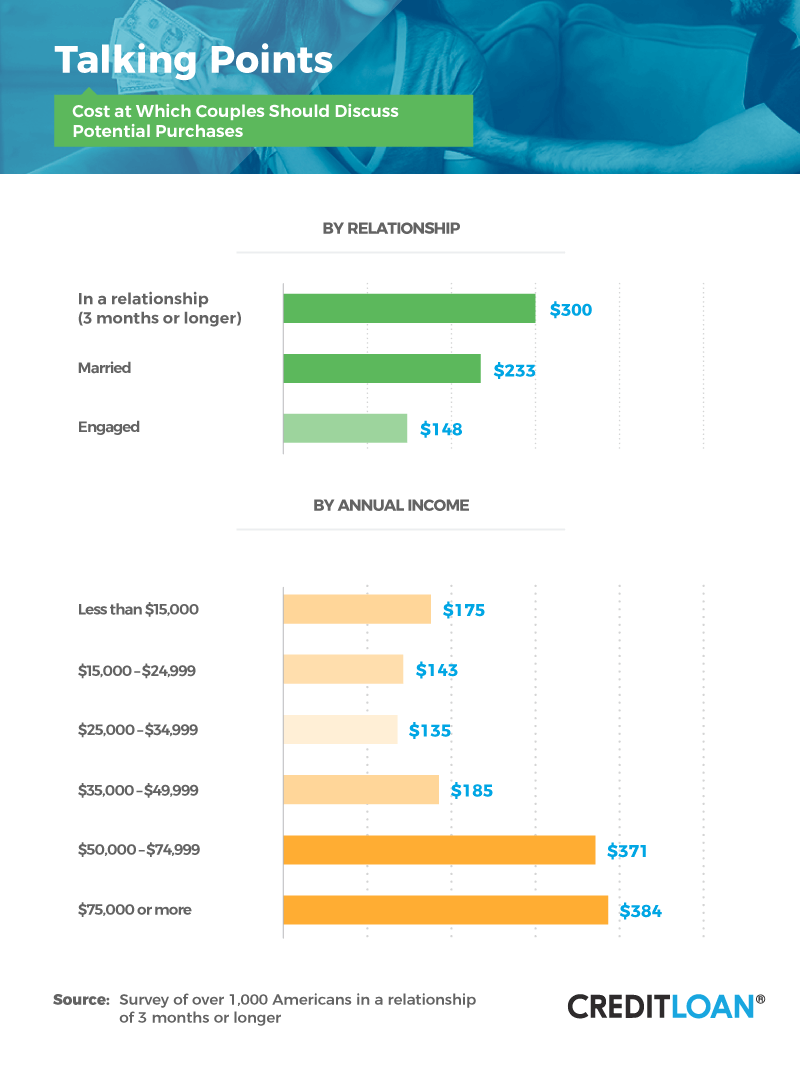 Between partners, some purchases don't require any discussion. But at what point do both parties need to sit down and talk about the cost of a potential purchase? According to our survey, the importance of discussing larger purchases can ebb and flow over time. We found these differences had more to do with income and relationship stage rather than gender.

When it came to the relationship stage, there was more variation. Couples who were in a relationship of three months or more were the laxest about their partner's spending: The average couple saw no need to go over a purchase together unless it was $300 or more. This could be because a couple's finances are less likely to be combined before engagement or marriage, making people in a relationship less concerned about frivolous spending.

Engaged couples exhibited the most stringent rules about purchase amounts. Any spending over $148 was up for discussion for this demographic. Since the average cost of a wedding in 2016 was $35,329, it makes sense couples in the throes of wedding planning might be slightly more budget-conscious than most.

Married couples sat comfortably between the two other demographic groups, settling on $233 as the purchase value that must lead to a discussion. Compared to their counterparts in a relationship other than marriage, many spouses combine finances or are at least more invested in their partner's spending for the sake of their future. It only makes sense they are more sensitive to big spends after tying the knot.

The state of a relationship is only half of the equation. Income level, previously established as a prominent strain on many couples, is also a factor in how money is spent. Our chart shows a somewhat steady crescendo from low income, low threshold to high income, high threshold, but there are certainly notable exceptions.

In the lowest income bracket (less than $15,000 a year), our participants said purchases under $175 required no input from their partners. The numbers slipped back down slightly in the next two income groups. These people believed items priced above $143 and $135, respectively, merited discussion before making a purchase.

At the $50,000 or more mark, the ceiling came off, and couples were OK with letting any purchase under $371 go unvetted by their partners – a jump of almost $200 from the next lowest income level. Finally, the numbers peaked in the $75,000 or more range at $384, the laxest of all when it came to the price threshold.

When it comes to matters of love and money, communication is a clear key to success. With every big purchase that is discussed between partners, one less secret is tucked away, and one more argument is safely avoided.

As you go forth into couplehood, engagement, marriage, and beyond, CreditLoan.com can offer support at every stage of your finance journey. We have everything you need, from recommendations on the best in credit cards and personal loans to credit monitoring and debt consolidation.

Whether you're trying to save for a wedding, pay down debt, or are just thinking ahead toward retirement, our educational tools and expert analysis are here to help.

Information hidden from partners, wasteful purchase categories, and conflict topics that had fewer than 26 total responses were not included in the final presentation of these findings.

Are you already tearing off down the hall to show your partner this article? Please share the graphics or results of our study for any noncommercial use. All we ask is that you provide a link back to this page, so our contributors get a nod and can pay their own bills in the meantime!