Debt is pretty common among Americans, and it's not uncommon for it to get out of hand. In fact, 13 percent of adults struggle to meet obligations some months because their income fluctuates. So it's natural that people will occasionally need to reach out to others for financial help.

According to our survey, baby boomer men reported they would wait until their debt load was nearly twice the amount incurred by millennial or Gen X men before asking for help. 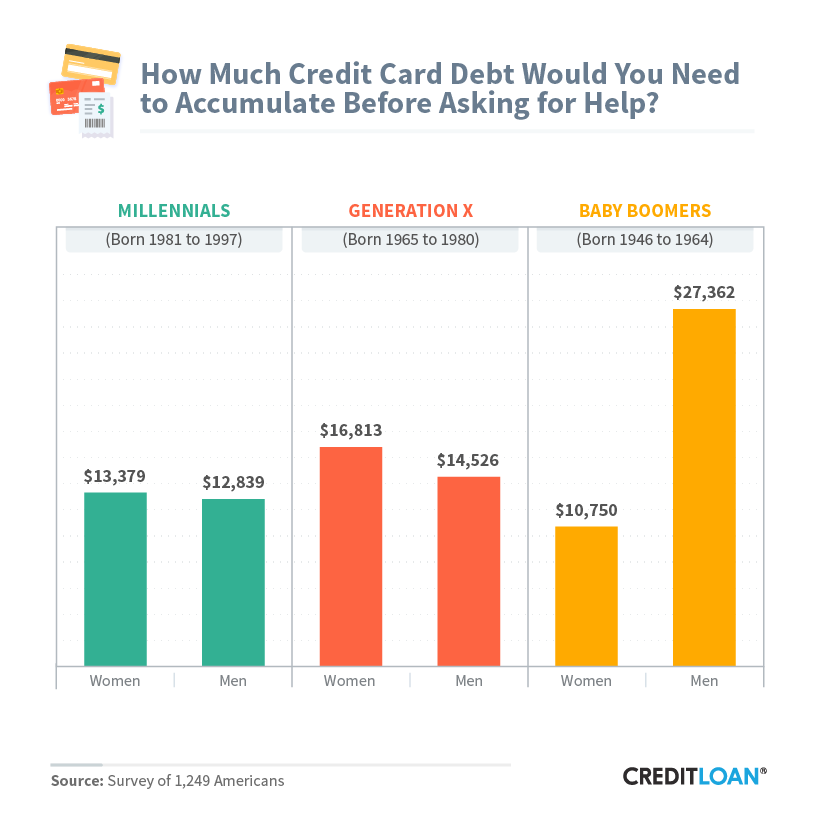 Could pride be a factor for older generations? Possibly. When asked how proud they were of their credit, 26 percent of baby boomers felt a strong pride versus 16 and 15 percent for millennials and Gen Xers respectively.

Millennials and Gen Xers are similar in some ways, but when it comes to finances, a couple of issues separate them.

Because a higher percentage of millennials attended college than previous generations, they are burdened with more student debt. Plus, studies show more educated millennials are living in or near tech-driven metropolitan areas like Austin, San Diego, and Los Angeles where rents tend to be on the expensive side.

When we look at gender, we find some interesting differences too.

Baby boomer women were more willing to seek financial assistance at a lower debt amount, whereas Gen X women tended to wait until their debt amount was, on average, approximately $6,000 more than their older counterpart before asking for help.

One reason women – especially those who are retired – may reach out for financial help before men are because they are less secure about having funds to maintain their lifestyle in retirement.

Baby boomer women place a higher value on savings, and many are concerned about running short of funds during retirement, which can often translate into a desire to avoid financial pitfalls later in life.

Recent studies also indicate women show more concern than men over financial matters and unexpected events like illness or financial emergencies. This could signal they are willing to ask for assistance when necessities such as housing and food are an issue.

When the decision is finally made to reach out for an emergency financial need, do men and women veer toward the same sources? Not quite. 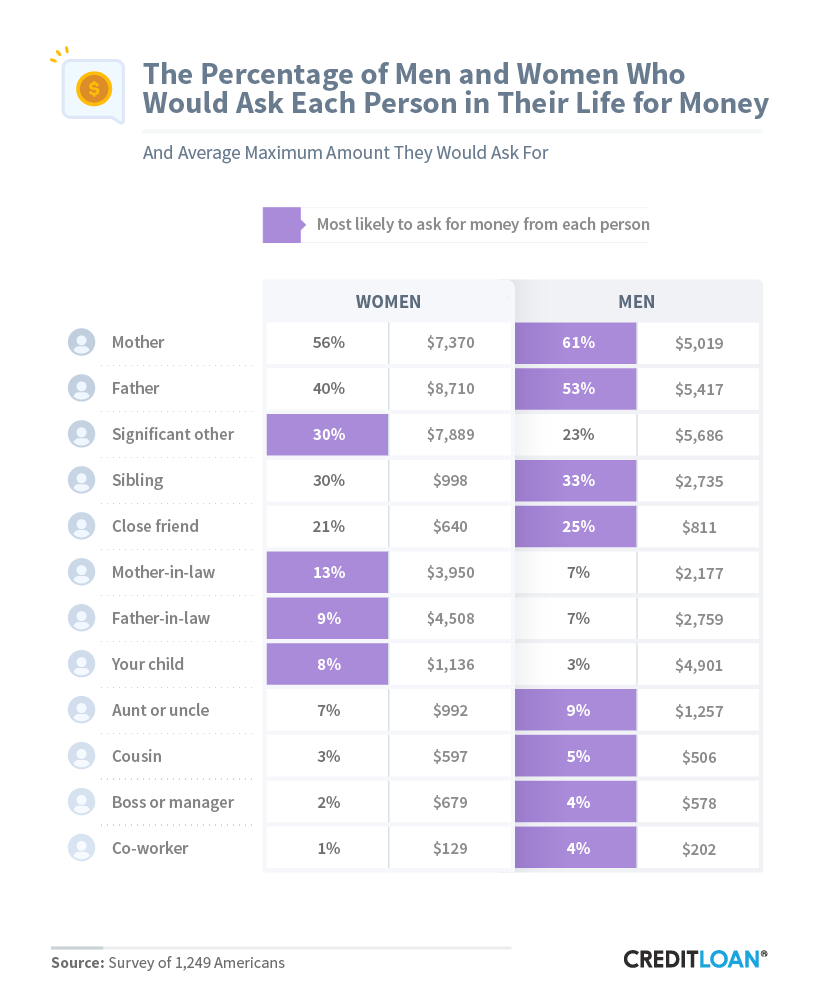 Men were more likely to ask their parents for money in an emergency situation as opposed to a sibling or close friend. And chances are they won't ask a manager or a co-worker for cash. Pride certainly may play a role here too.

The women in our study were 7 percent more likely to seek financial assistance from a significant other compared to men.

Even more surprising? Women would ask their mother-in-law or child at roughly twice the rate than men. Why? Perhaps because studies have shown 70 percent of women feel comfortable lending money to family members.

As we take a closer look at the generations, it appears very few millennials had a problem borrowing from most groups in emergency situations, especially their parents. 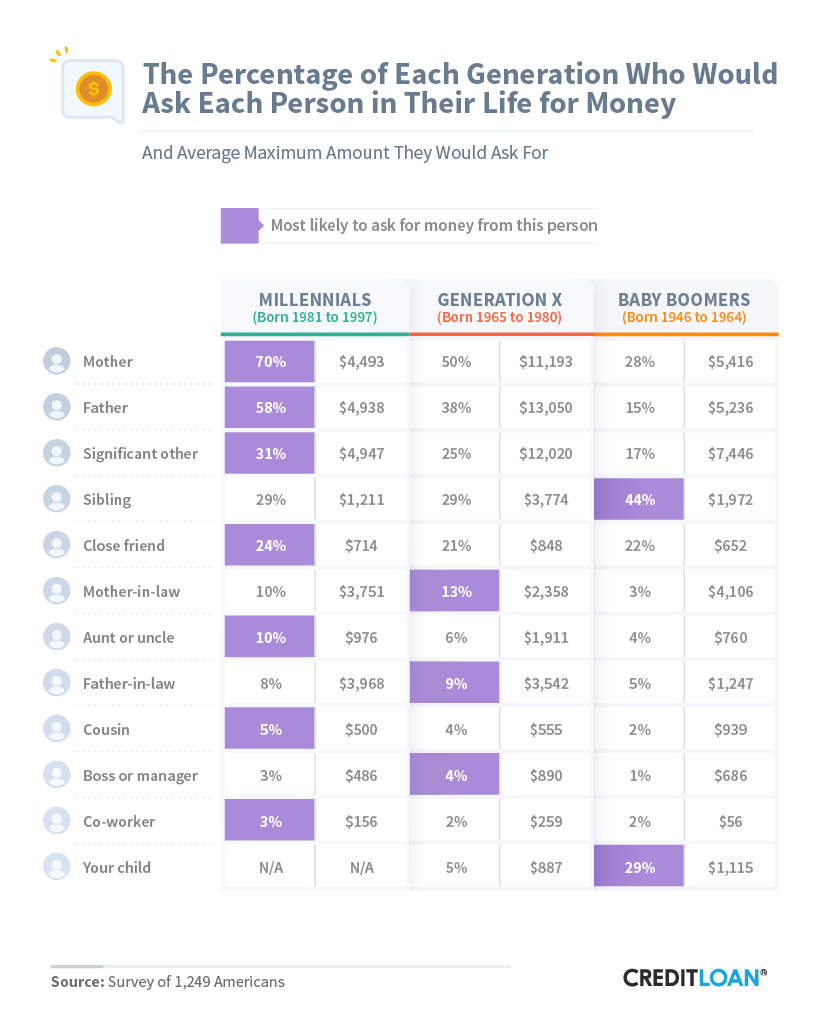 Since parents are more likely to have higher amounts of equity in home or real estate holdings, millennials often use them as a source to purchase a home.

Gen Xers – more so than millennials or baby boomers – tended to request the most money. While less went to their parents or significant other for extra cash, those that did asked for roughly two-and-a-half times the amount millennials did.

Overall, people were four times more likely to request money from parents than a sibling.

Another reason could have something to do with differences in income and the net worth of siblings, especially when one makes significantly more than another. These statistics have been difficult to measure for the two younger generations. However, baby boomers were the exception in that they were more likely to seek help from a sibling than a parent.

And perhaps because the parents of baby boomers are more likely to be deceased or on a fixed income, 29 percent of boomers would ask a child for money compared to only 5 percent of Gen Xers.

Why Men and Women Ask to Borrow 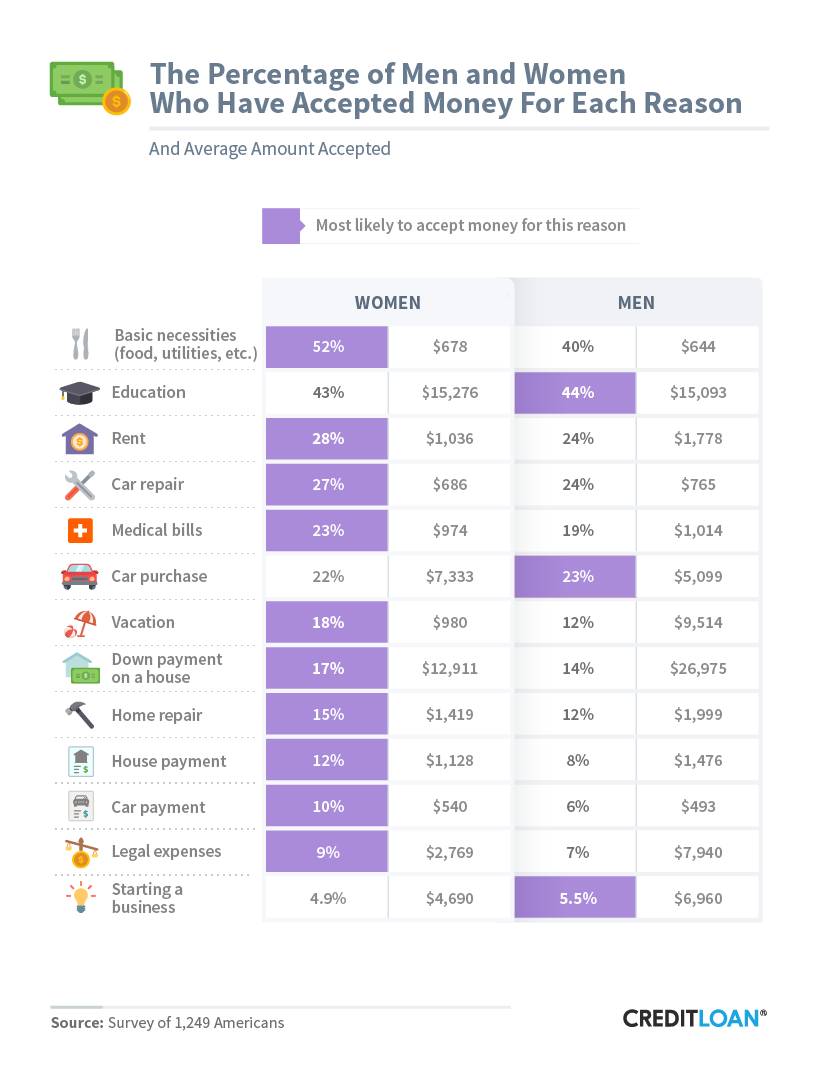 Those who ultimately decide to ask for financial assistance do so for a variety of reasons– the primary one being for necessities such as food, clothing, and utilities.

Women, in particular, were more prone to seek support for basic needs. They were also more likely to request help for home-related issues such as mortgage payments, repairs, and down payments.

One reason could be because as of 2015, 42 percent of mothers brought home all or most of their households income.

Both genders valued education and were willing to enlist help either for themselves or possibly for their children. Also, both seemed willing to ask for rent assistance.

Men were slightly more likely to request money for entrepreneurial purposes, though, such as starting a business.

And when it came to vacation, 18 percent of women versus 12 percent of were willing to ask for money to take some time off.

Here we break down some reasons why the generations might accept money. 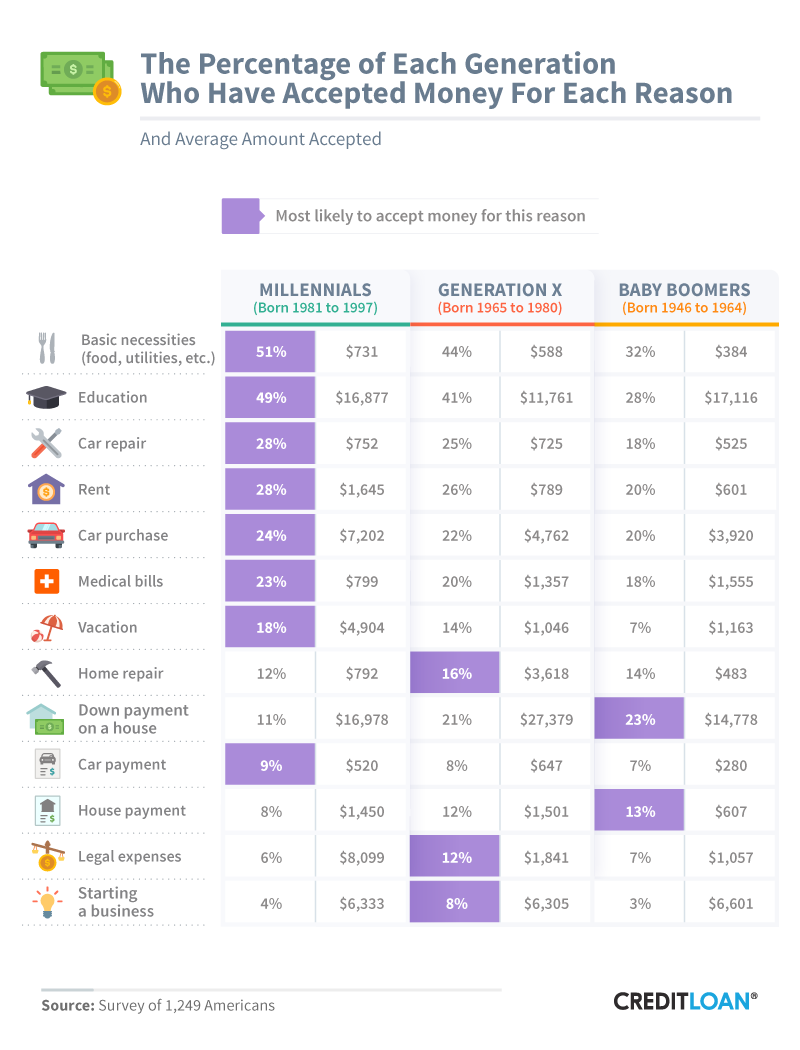 Millennials were 59 percent more likely to accept money for basic necessities such as food and utilities and more than twice as likely to want money a vacation than baby boomers.

Why? There may be several conclusions we can reach.

To put that into perspective, that's 20 percent less – a fairly staggering figure.

And housing, particularly rent in larger urban cities, is much higher than in past decades.

That means when millennials need to borrow money from their parents for a home purchase, they typically ask for over $50,000.

Overall, millennials are not only more likely to ask for help, but they also tend to request larger amounts for basic needs.

So let's say you need to come up with $1,000 and are trying to decide whether to ask for the money, sell something, or perform a service. What would you do? 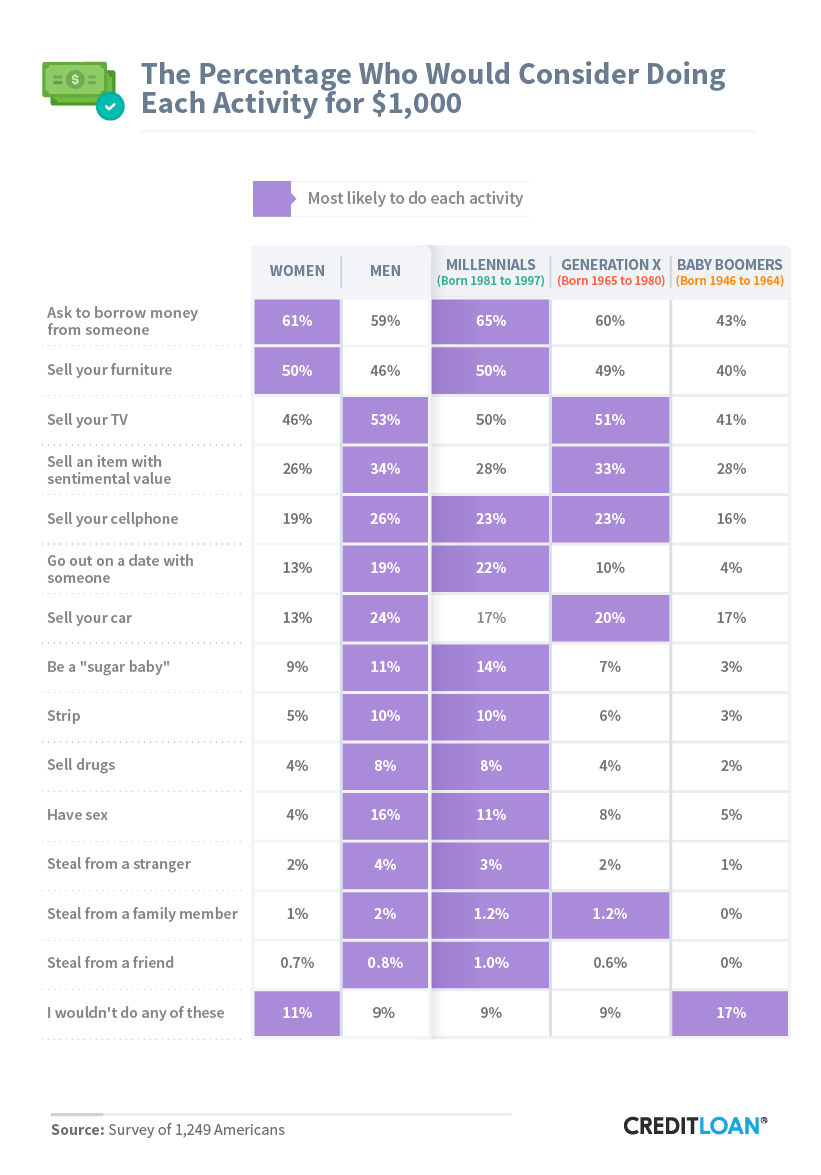 Over 60 percent of women and millennials were likely to borrow money from another person, while 43 percent of baby boomers considered this an option.

Need to get rid of that dining room set you inherited from Aunt Sally? Selling furniture was an alternative that appealed more to women, millennials, and Gen Xers.

Thankfully, very few of any group would steal from a family member or stranger.

An intriguing stat was that more men than women were willing to be a "sugar baby," or go out on a date with someone for money.

Additionally, men were four times as likely to have sex and twice as likely as women to strip for money.

And because a good number of millennials have debt, this most likely contributes to their willingness to date or even engage in sex for money. SeekingArrangement.com, a website known for their unconventional arrangements, identified about 2.5 million college-age students who were willing to find a sugar daddy.

No doubt about it, rising amounts of personal debt have encouraged men and women, from millennials to baby boomers, to consider asking friends and family for financial assistance.

Baby boomers tended to have more conservative borrowing habits even as they accumulated more debt. However, Gen Xers were somewhat less conservative but tended to align with millennials when it came to the amount of debt they accrued.

While millennials and women appeared to be more likely to borrow when budgets were lean, we saw examples of how and when all respondents were willing to borrow money.

Before you rush out to ask your family and friends for financial help, check with us first. At CreditLoan, we have the expertise to help guide you through most common financial needs.

Participants were excluded from analysis if they failed an attention check question. The data we are presenting rely on self-reporting. There are many issues with self-reported data. These issues include but are not limited to: selective memory, telescoping, attribution, and exaggeration. No statistical testing was performed, so the claims listed above are based on means alone. As such, this content is purely exploratory, and future research should approach this topic more rigorously.

If you find this information valuable, then, by all means, feel free to share with your readers for any noncommercial use. All we ask is you link back to this page so that they have access to our complete analysis.