The news is rife with stories about how bad things are in the US economy, and the fact that many Americans have been living beyond their means. Usually, the articles take a stance that the latter is largely responsible for the former. Americans are frequently talked about as if they are the worst consumers, or maybe it’s just that, as the world’s official scapegoat, it often seems this way. When statistics about the US economy are then presented in comparison with those of other developed (or wealthy) nations, many would be surprised by the outcome.

Data from The International Monetary Fund is widely referenced for its market research and financial analyses by leading popular and scholarly texts due to its accuracy. According to its 2007 Financial Report, the 10 wealthiest nations in the world (in terms of GDP) were the United States, followed by Japan, Germany, China, United Kingdom, France, Italy, Spain, Canada and Brazil. 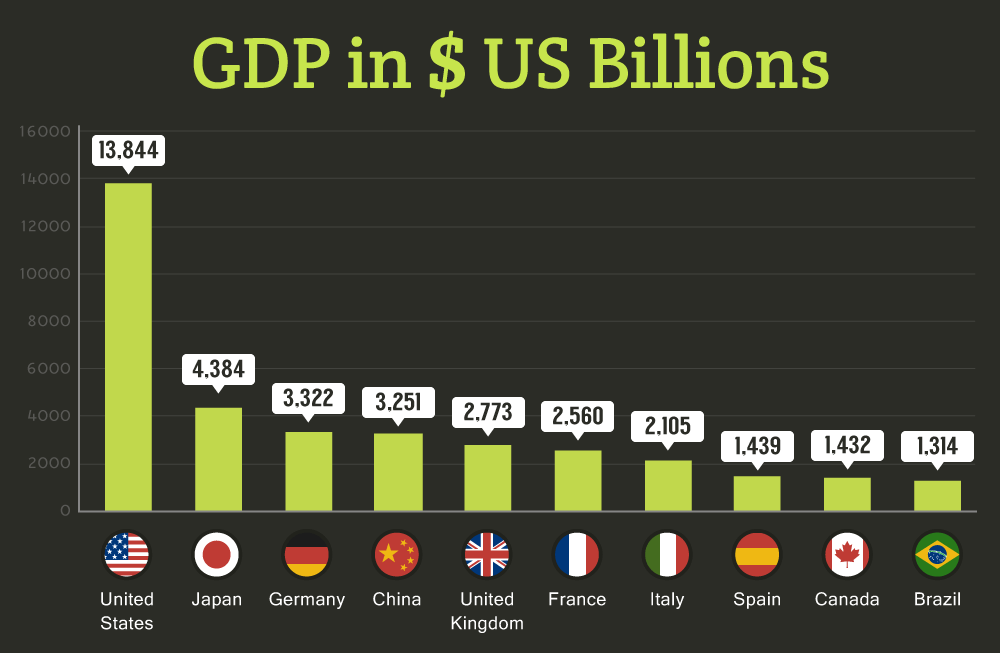 The actual nations that make up the highest GDP list are probably not surprising, and their combined GDP is equal to roughly half of the world’s total economy. Generally speaking, the countries that produce the most are going to be ones that spend the most. This is more or less the case for individuals as well. A nation’s external debt can include any number of factors, including loans, trade deficits, budget deficits, and the sum of its citizens’ outstanding consumer debt and other factors. This is similar to how an individual’s debt can include business loans, mortgages, credit card debt or student loans.

Surprisingly, there is not a wealth of literature written about the size of these large economies after their debts have been considered. Effectively, this could be referred to as an ad hoc net worth of the above nations’ economies. This is very interesting, as the nation is in essence the sum of its parts, meaning its citizens. Someone’s debt-to-income ratio is one of the main factors in someone’s credit, and their ability to buy a house or finance a car. Why does it not play a major role in a nation’s ability to conduct business and borrow money in such a way?

According to the CIA World Factbook, the top 10 debtor nations (meaning the countries with the most external debt) are the United States, United Kingdom, Germany, France, Italy, Netherlands, Spain, Ireland, Japan and Switzerland. 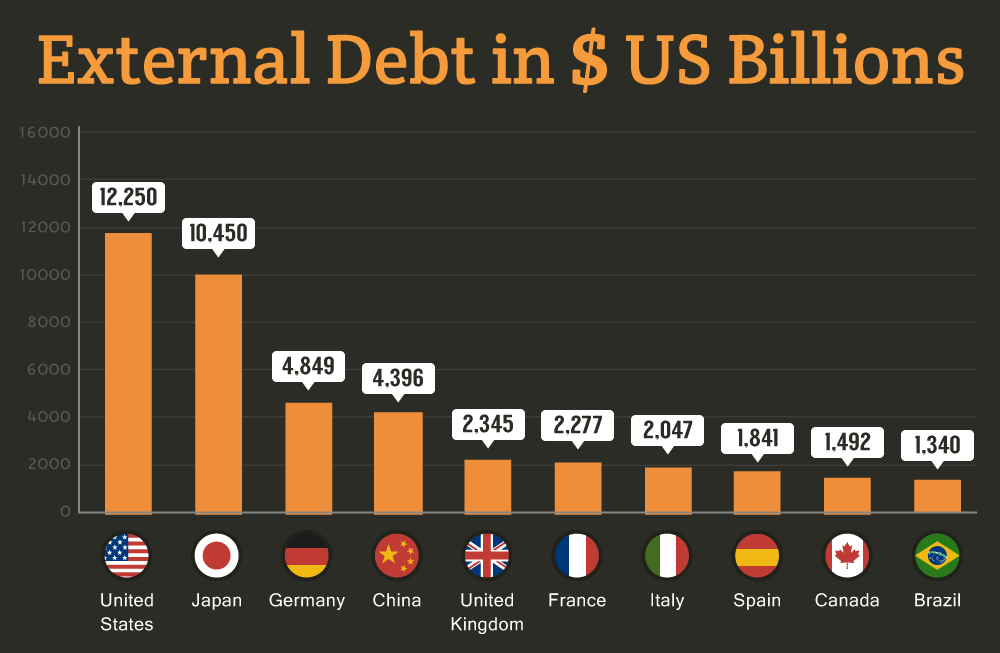 Seven of the top ten debtor nations are included in the world’s top ten economies. Not surprising. This is largely a result of widespread availability of affordable credit, and relatively large middle classes in these countries, and consequently a large ratio of home/property owners. Most popular rhetoric on the topic would claim that wealthy countries have grown accustomed to being wealthy and they are enthralled by consumerism – it could be argued that this high level of debt could be a result of a culture that is used to and willing to buy now, and pay later with interest.

According to data, Japan has the highest positive income (in gross terms) at US $2,892 billion. Similarly, the US economy is $1,594 billion. At the other side of the spectrum, Great Britain’s income to debt ratio is a US -$7,677 billion, and that of France is -$1,890 Billion. On a per-citizen level, Japan is number one, followed by the United States.

So what are some of the reasons why these nations have such high outstanding debts, even to the point where it may dwarf its GDP in comparison? Typically, in what are considered to be established capitalist economies, interest rates are kept low on purpose in order to encourage entrepreneurship and to promote the growth of businesses and spending. The idea is that those who contribute to the growth of the economy would make up for those who do not, and those who do not contribute positively to the economy would at least spend money in it. What are some causes of the high debt-to-income ratios in Europe?

Expensive labor, expensive exports, expensive currency and a small population all play a part. High levels of taxation and large social welfare systems are to blame as well. On the international front, European nations are having a difficult time competing with an increasingly devalued dollar (and consequently the Chinese Yuan and The Japanese Yen). Conversely, in Japan, it is often pointed out that the nation has had a history of being a leader in technology and manufacturing – it is also a nation that is a net exporter, or a nation that exports more than it produces. The country’s social welfare system is modestly sized, and the Yen has purposely been kept at a rate that has traditionally made Japanese exports more desirable compared to its US and European counterparts. There are also arguments that pertain to the differences in culture, and those that relate back to the fact that Japan’s position in the global economy is a relatively new phenomenon. 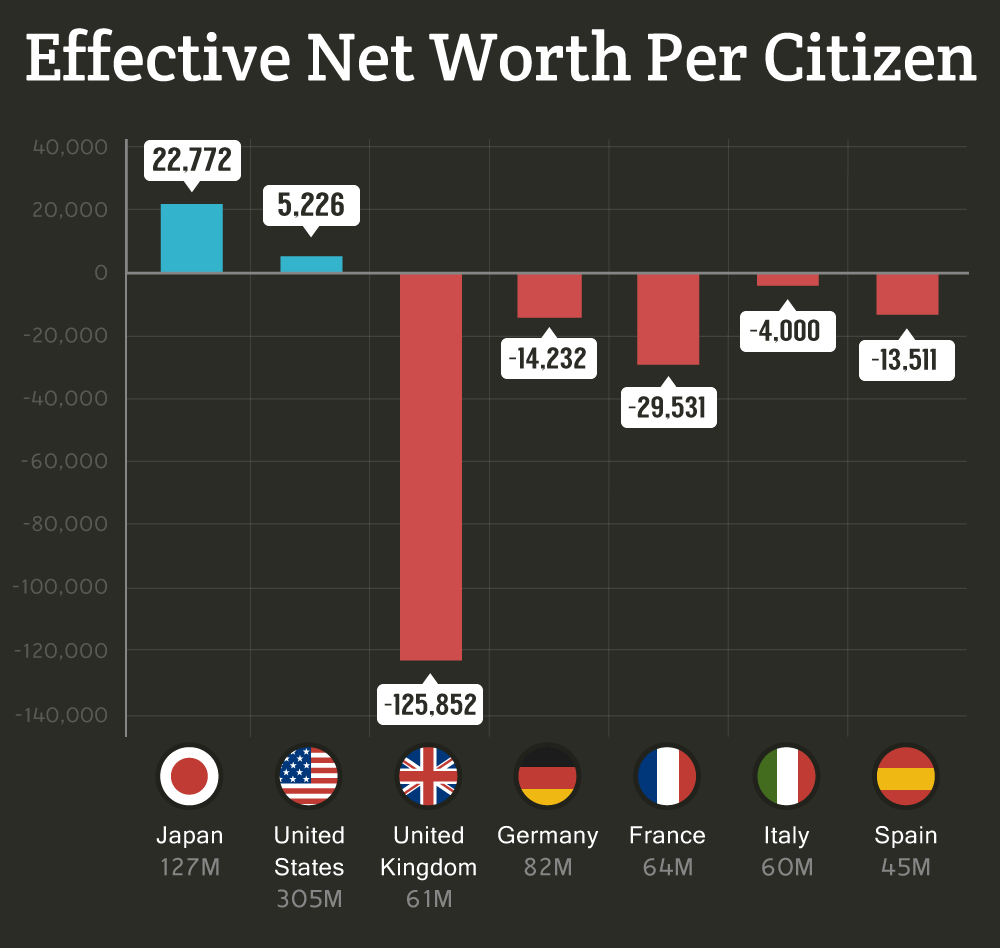 Looks like the United States is still the best place to be, even though debt is high.