Memories of a first job can be anything from nostalgic reflections of a simpler time to embarrassing flashbacks of workplace faux pas. Whether the memories involve scooping ice cream, wrangling kids at a summer camp, or bagging groceries, your first job likely set you on a trajectory into the working world.

To find out how people's first jobs influenced their lives today, we surveyed over 1,000 people who've been employed at least once. We asked them to consider their first job, any motivating factors that led to them seeking that job, and how their decision to initially enter the workforce affected their current career.

How have these trends changed and evolved over the generations? Why do most people look for a first job, and how are they able to use their early experiences to achieve their future financial goals? Read on to find out. 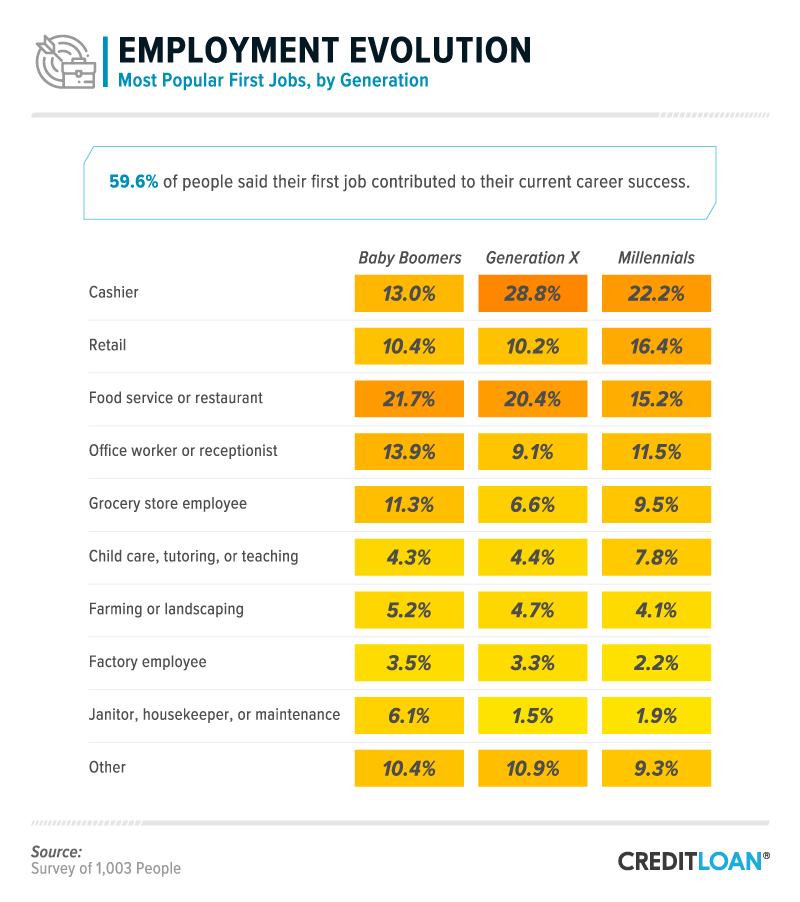 Food service jobs were common first jobs across the generations surveyed. Restaurants are great places for inexperienced employees to establish proper workplace habits, such as knowing when to ask for help and how to prioritize tasks. Cashier positions were also popular among all generations. These workers learn how to balance a cash drawer and use practical math skills in real time.

Younger generations are changing both new and old industries, and millennials were more likely than their predecessors to take first jobs such as retail and child care.

First jobs aren't always very glamorous, but they still provide an opportunity to make a lasting impact on a person's character. Nearly 60% of respondents attributed at least some of their current career success to their first job. Skills learned in early jobs often include team building, communication, time management, and other skills that are important throughout one's career. A first job introduces someone to the idea of being in charge of his or her own means of income.

The median age for someone entering the workforce is steadily increasing. A whopping 13% of millennials began working at age 20 or older compared to roughly 9% of Gen Xers and over 6% of baby boomers. 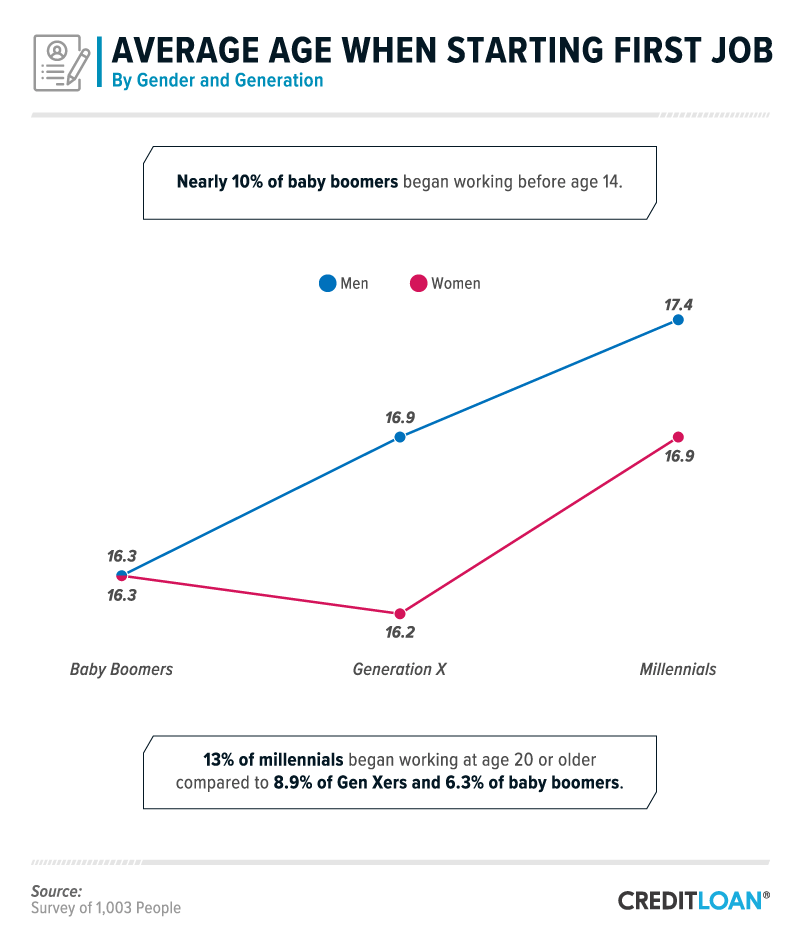 Early predictions of Gen Zers show an eagerness to work for social causes, and some are getting started on this in high school. Companies are reaching out to this younger generation, who are more likely to want to volunteer their time to an internship and have a "start from the bottom" sentiment that keeps them motivated. If this trend continues, it would be fair to say that future generations may pick up their first paid positions at an even later age.

A larger focus on education is something to consider here as well. As the rate of high school graduates enrolling in college has increased by 25%, the teenage labor force rate has dropped. More academic opportunities are pushing high schoolers toward summer classes instead of summer jobs.

Competition from older generations lingering in the workforce is also adding to new workers joining the workforce later. The same jobs that appeal to younger workers are becoming common jobs for older Americans as well. The roles of cashiers, retail clerks, and secretaries are popular jobs for those aged 55 to 64, which could make the job hunt a little tougher on the youngest generations who are hoping to find work in those fields.

Everyone's financial journey is different, and as a result, the ways we all accumulate debt is different too. 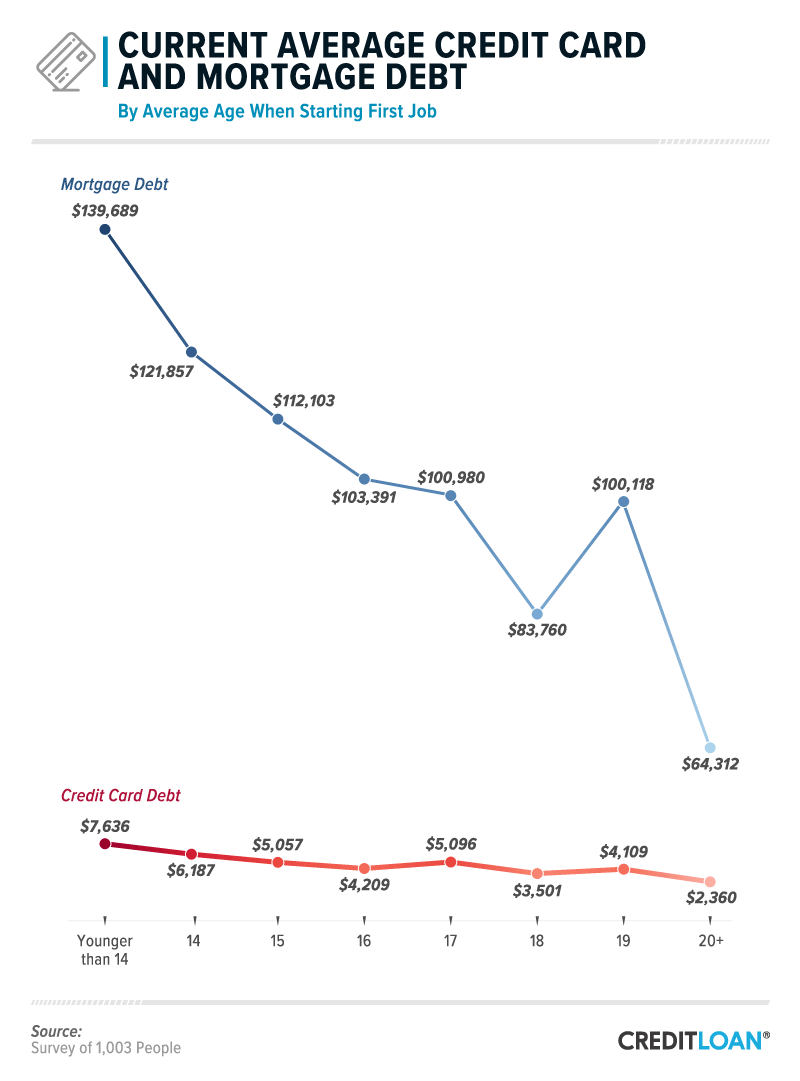 Those who entered the workforce later may have been preparing for college instead of getting a jump-start on a job. For teenagers who hold off on getting their first job, education may remain their primary focus which could pay off in the future. Someone with a college degree earns 56% more than someone with solely a high school diploma, which may enable someone to accrue less debt in the long run.

As we'll explore later, the main reason why teenagers get their first job is to have their own spending money for discretionary purchases. This desire can have consequences down the road: If the primary motivations for finding a job are focused solely on spending and not saving, it may be hard to break bad spending habits throughout life, leading to greater credit card debt.

A note about mortgages: Purchases like mortgages are considered "good debt" as they increase your net worth or wealth. Home prices are bouncing back from the mid-2000's subprime mortgage crisis, up 6.8% from 2016 to 2017. When home prices appreciate, homeowners can sit back and enjoy returns on their initial home investment.

Finding a Job for Fun or Funding

Responsible financial management is a learned skill, with some people understanding the concept better than others. Without realizing it, even the motivating factors behind why someone enters the workforce for the first time can be an indicator of their future money habits. 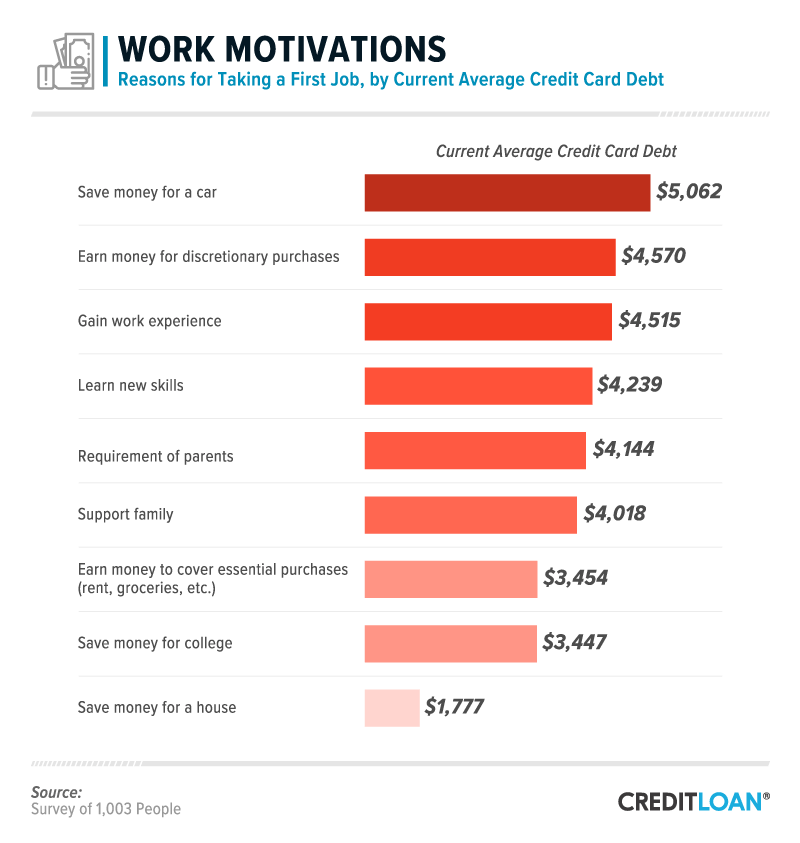 Entering the workforce is a necessity for some people, and that understanding may help how they handle debt. Respondents who initially sought work to support their family or to achieve a savings goal had some of the lowest credit card debt.

Those with the highest credit card debt were motivated to get their first job to satisfy their desire to have more spending money or to buy a car. Over the years, buying a car has become less of a mid-20th-century milestone than it once was. It has become a more luxurious and regulated expense. These days, most people find it difficult to have any extra spending money in their tight budgets, so many families opt to share vehicles to cut costs.

Overall, parents believed their children should start working at an average age of 16.6. Some economic experts agree part-time jobs can be a great way to introduce kids to finances as long as they find a balance between their academics and extracurricular activities. Parents are now exploring options that can give their kids an edge in the competitive job market, and getting started with a job early can prepare them for the future. 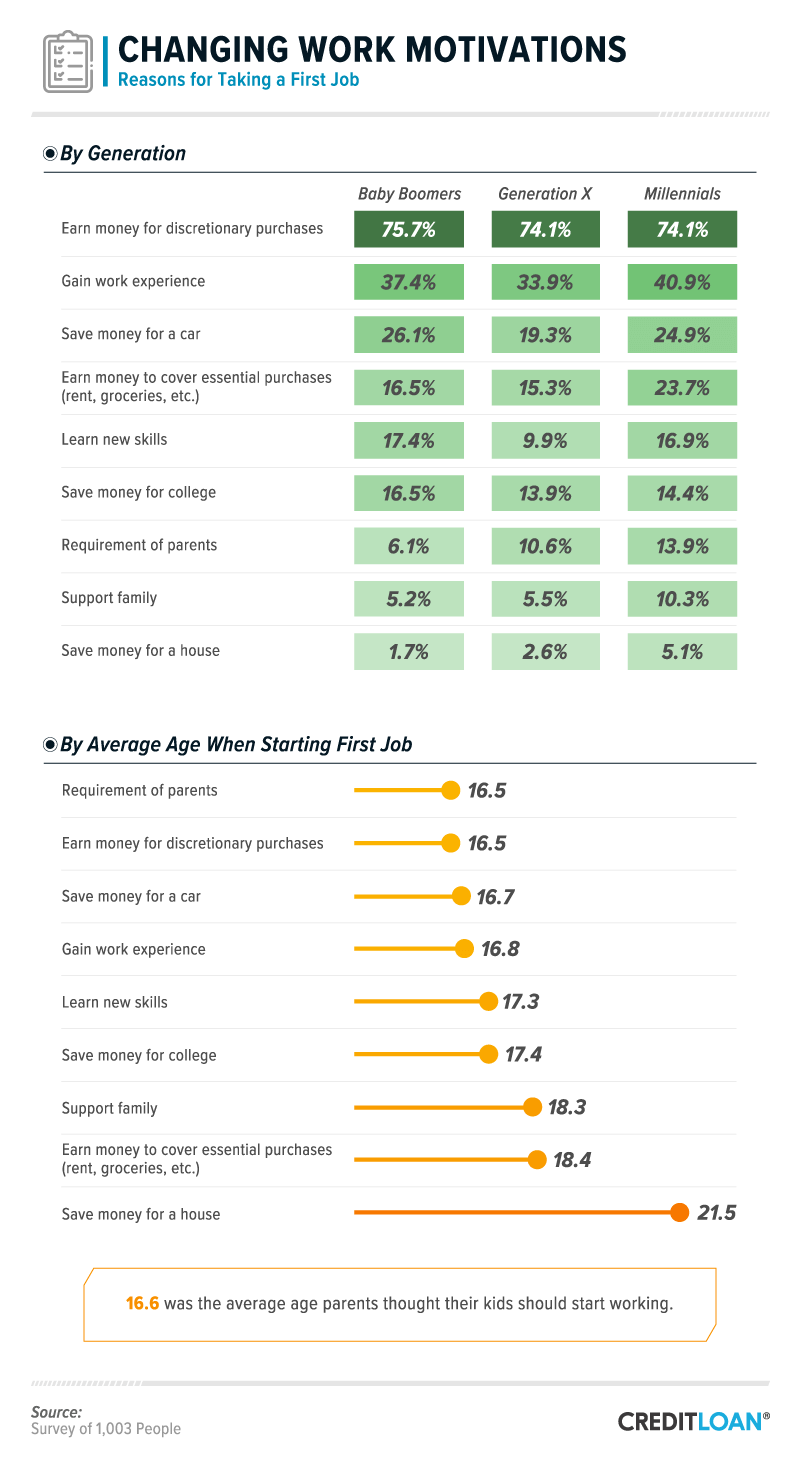 Respondents who were motivated to enter the workforce to pay for basic expenses or support a family found their first jobs around age 18 on average. Millennials were more likely than other generations to find work to cover the costs of essentials or to support their loved ones.

The major outlier in this survey comes from respondents who got their first job to save for a house. On average, they started working at age 21.5. People in this situation could be from more affluent families and are entering the workforce later on average.

Nearly 1 in 5 millennials found it difficult to land their first job. With more people graduating high school than ever before, the job market has a much higher number of applicants ready to start work. This, combined with the volatility of the economy and impossibly high expectations for potential hires, results in a struggle for millennials to find a job in the chaos. 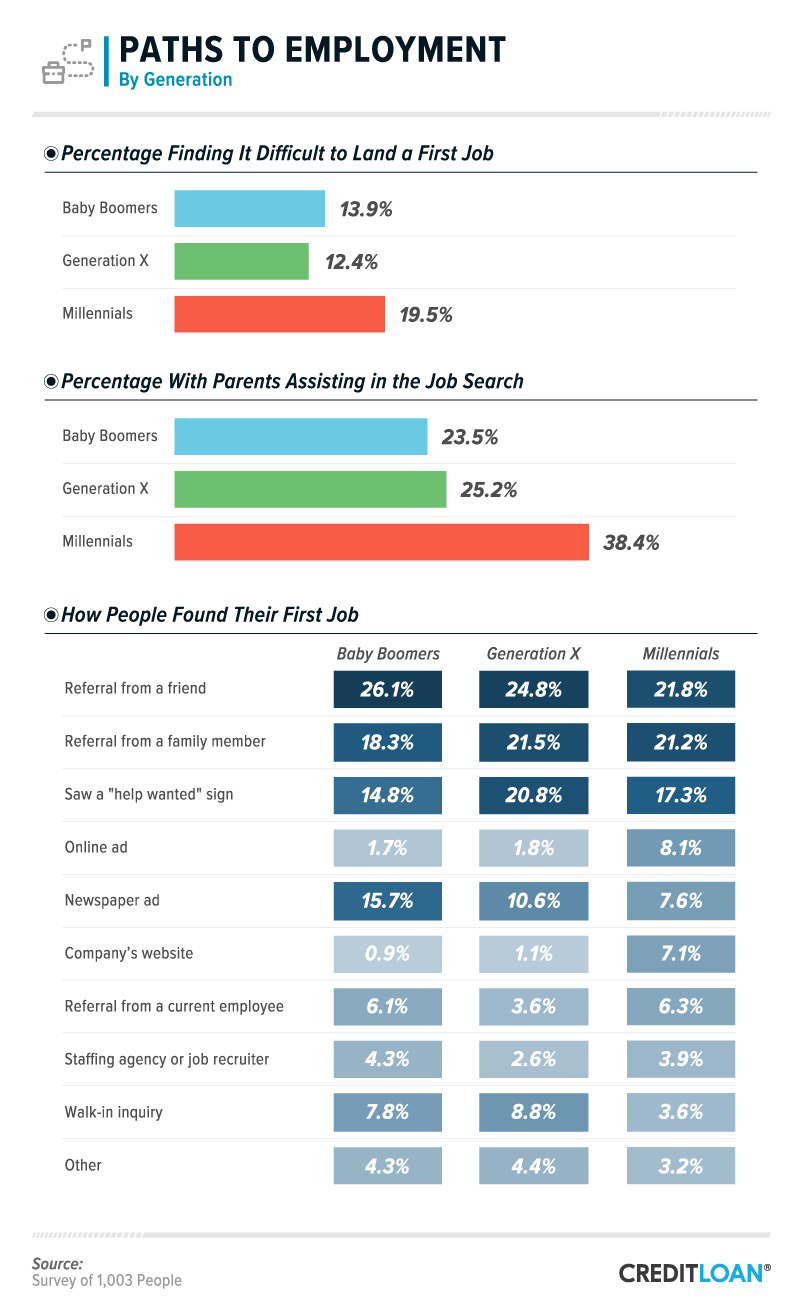 These constantly changing variables may have caused some millennials to rely much more on their parents to help with the job hunt. Parental involvement can very easily go too far, with employers commonly receiving resumes and inquiries from parents on their children's behalf. This behavior not only looks poorly on the parent for being too hands-on, but it reflects poorly on the applicant whose independence and professionalism has been stripped away.

From entry-level jobs to executive-level promotions, referrals go a long way. Having a reputation for possessing a good work ethic will help you land jobs, as people should be more prone to recommend you to their associates. While it's possible to find a job based on merit alone, being able to network and create connections can allow you to find job opportunities before other applicants.

The job hunt has officially moved online, and being aware of your online impression is becoming increasingly important. Job search methods such as newspaper ads are becoming less relevant, while online and corporate website ads are becoming more popular. There are many employment networking and resume platforms that are updated daily with job postings, and you can often apply with a few clicks.

Your First Job Has a Long-Lasting Impact

Thinking back to your first job can elicit memories of inexperience and youth. The youngest generation is currently experiencing a job market where everyone is looking to make his or her resume stand out.

Getting a job at an early age can help you to secure good habits for the future, or lead you down a road of overspending. The choice is yours on how you will protect your assets.

There are many credit cards with programs geared toward people with no credit history, which is perfect for teenagers who want to start building their credit while they earn their first paychecks. With parental control over the account and spending limits, establishing good financial sense early on with your children helps them understand the importance of staying on top of spending and saving.

We surveyed 1,003 people using Amazon's Mechanical Turk. We excluded those who have never been employed. 55.8% were women, 44.1% were men, and less than 1% considered themselves nonbinary. Participants ranged in age from 18 to 82 with a mean of 37 and a standard deviation of 11.5.

No statistical testing or weighting was performed, so the claims listed above are based on means alone. As such, this content is purely exploratory, and future research should approach this topic more rigorously.

Did your first job prepare you for your current career? The skills we learn at an early age can impact the type of workers we become later in life. These findings are pretty interesting if you ask us, so cite us as your source if you share this with any friends or co-workers for noncommercial purposes.