No one wants to have the dreaded breakup conversation, so maybe that’s why nearly 2 in 3 people say they've been ghosted firsthand.

But is this really how most people call it quits? Before your next date disappears without a trace, we're taking a closer look at everyone's least favorite part of dating: breaking up.

We asked 1,136 people of various ages and sexual preferences to weigh in on their experiences with calling things off: from the dreaded ghosting to breaking up over text and even social media. Read on as we explore who's doing it, how often, and why.

Breaking Up in the Digital Age

You probably don't need a catchy song to tell you breaking up is hard to do. No matter how long you've been dating (or even just texting regularly), relationships you know aren't good for you can be hard to walk away from. Studies have shown being with someone causes a chemical reaction in the brain similar to ones caused by drugs. Love is an addiction, and heartbreak is like going through withdrawal.

You don't need to be dating six people at once to know breaking up in person isn't the only way to end a relationship, though. Roughly 1 in 5 men and women admitted they'd broken up with someone via text, while over 23 percent of men and about 30 percent of women opted against a face-to-face breakup and conducted the business through a phone call.

According to people surveyed, ghosting was nearly twice as popular among women compared to men. More than 22 percent of women admitted to ghosting someone. Ghosting may be relatively new, but the concept isn't just exclusive to young couples. While millennials (nearly 22 percent) had the most practice with ghosting, Gen Xers (almost 20 percent) and baby boomers (about 19 percent) had experience with ghosting as well.

No one likes being ghosted, but, in certain scenarios, that may not keep you from doing it yourself. 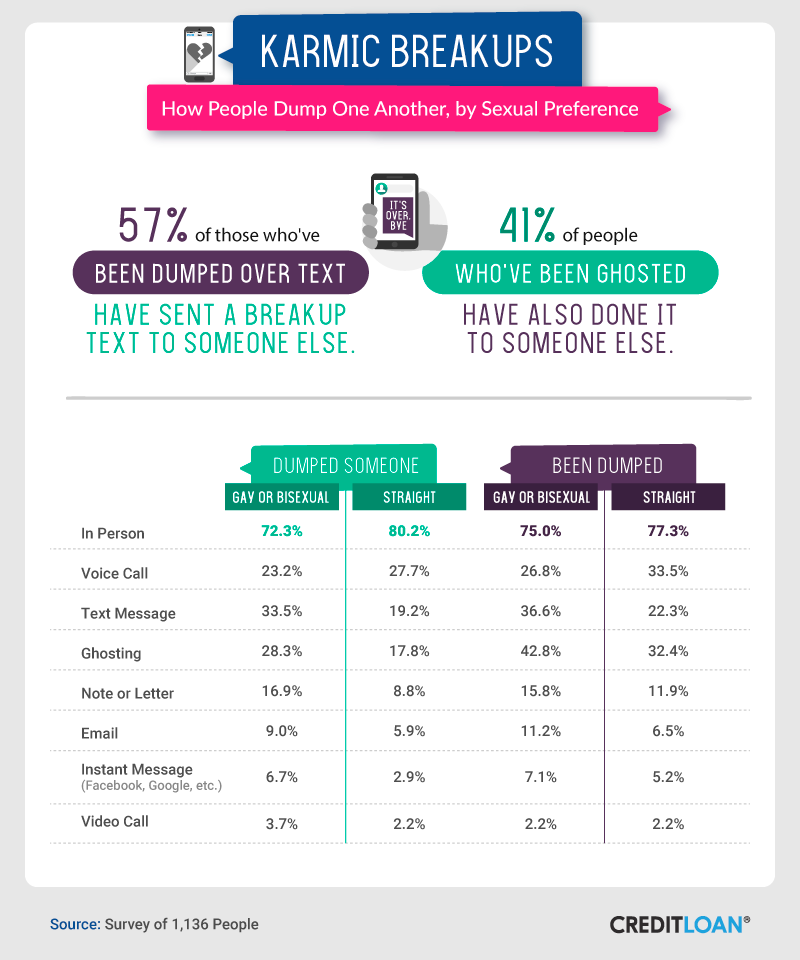 Respondents identifying as gay and bisexual were both more likely than people identifying as straight to experience ghosting (nearly 43 percent) and ghost someone themselves (around 28 percent). In some cases, ghosting can be a defense against a potentially volatile breakup. If you're afraid of how your partner might react, it may be tempting to simply disappear.

Other times, ghosting is a less nefarious act. If a person really is trying to balance multiple relationships at once, it may be easy to lose track of less exciting prospects.

People may also prefer to avoid breaking up because they're afraid to hurt someone's feelings or because they've recently been hurt themselves. Breaking up and being broken up with via text message was also more common among people who were gay and bisexual, although respondents who were straight were more likely to call things off with a voice call.

In good and bad relationships, text messaging can play a pivotal role in communication between partners. Still, it's important to recognize the limitations of texting in getting to know someone in the first place. Researchers say only 7 percent of how we communicate involves words. Emojis are great, but they don't exactly make up the missing nonverbal cues that help convey our meaning and emotions. 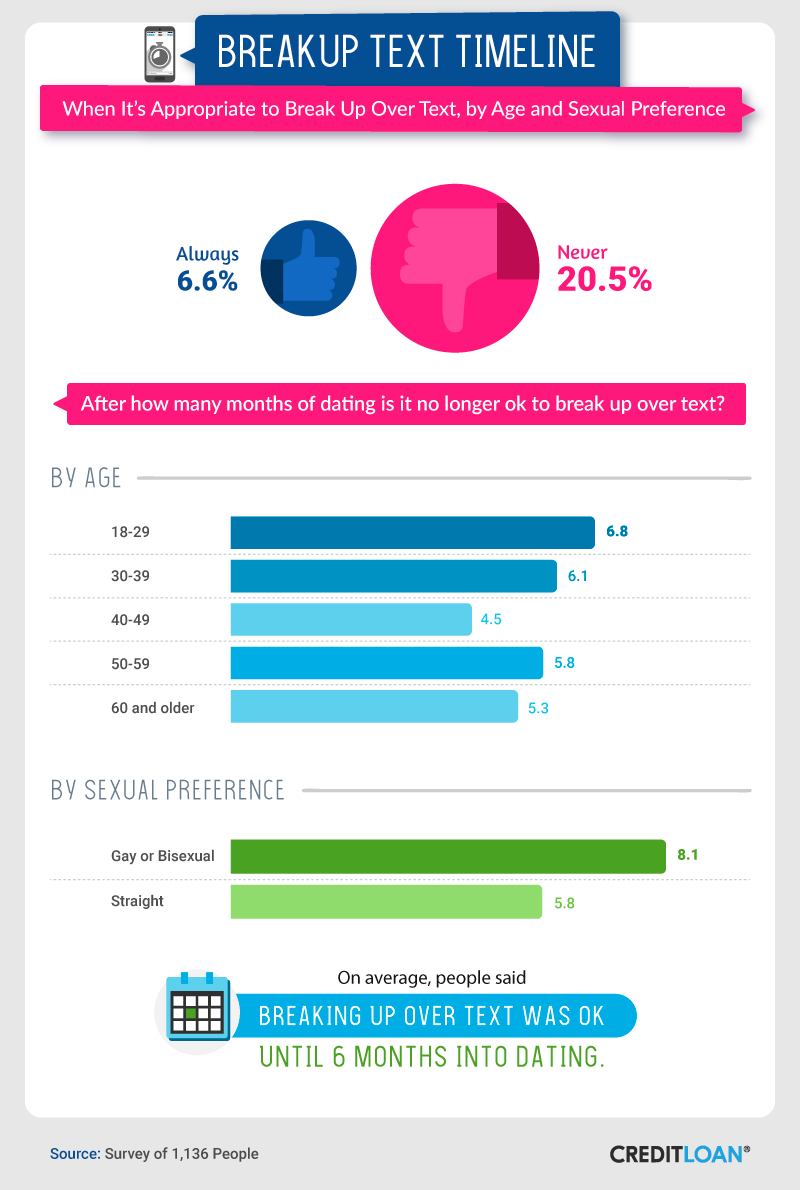 When it comes to breaking up via text message, more than 1 in 5 people said they'd never consider it. In contrast, nearly 7 percent said text messaging was always a good way to tell someone the relationship had run its course.

Different people had different perspectives on how long a relationship could go on before breaking up over text was no longer appropriate. Millennials are often cited as having a fondness for digital communication, and they believed relationships between six and seven months long could still be ended via text. However, people over 40 set the cutoff at between four and six months instead.

Like ghosting, there are many scenarios where breaking up over text might be the right thing to do.

A bad dinner date has its own complications, but online dating isn't without its own set of dangers. It's hard to tell from an app if someone is misrepresenting themselves, physically or otherwise, and user data aren't always well-protected by even the most popular apps.

With over 5,600 online dating scams reported to the FBI in 2011, the negative vibes you pick up from a date might be spot on. More than 2 in 3 women said breaking up over text was appropriate when they were afraid their partner might retaliate in some way, and nearly 59 percent of men agreed.

Safety was also more of a concern for participants identifying as gay and bisexual. Nearly 64 percent of people identifying as straight said fear of harm was reason enough to break up over text message, compared to nearly 73 percent of those that were gay or bisexual.

Another half of women felt breaking up digitally was OK when they'd only been on a few dates, and just as many men said it was OK if they caught their partner cheating. Long-distance relationships can be tricky, and without an easy path for face-to-face communication, roughly 1 in 3 people were OK calling it quits over text with someone who lived far away.

In many cases, people who were gay or bisexual were more comfortable with breaking up over text – over a quarter said worries about the other person getting too clingy or attached was a good enough reason to digitally cut ties – and more than 19 percent of participants who were straight agreed.

A New Era of Communication

Breaking up over text isn't the only digital indication your relationship is on the rocks. Studies have shown men who send or receive too many texts are less satisfied in their relationships than those who don't. Women are also more likely to want to have hard conversations over text and tend to be less happy with the results.

At a certain point in every relationship, money is bound to come up. The sooner you set a solid budget as a couple, the better your financial communication (and habits) are likely to be. Having these conversations can also help couples avoid unnecessary arguments about money down the road, but it's not always a great idea to do this digitally. A quarter of men and about 1 in 5 women discussed finances through text for the first time, but sharing financial information this way could lead to fraud or identity theft.

Beyond getting into arguments or talking about money, you might have some uncomfortable conversations over text message too. More than 1 in 5 people identifying as gay or bisexual said they discovered they'd been cheated on over text message, and over 11 percent found out about a partner's STDs or STIs this way. Men were also more likely than women to ask to borrow money over text, which can be a very delicate discussion.

Being ghosted by someone you've been talking to for a few days or even dating for a few months doesn't feel good. It can create a sense of shame, embarrassment, and even self-doubt. Despite how strongly most people feel about ghosting, it doesn't stop everyone from doing it. Like having hard (or important) conversations over text message, these digital communications were more common among millennials. They weren't exclusive to them though, and we found almost as many baby boomers as people half their age or younger admitted to ghosting a bad date.

No one said having important conversations in a relationship would be easy, but if the time comes to cut ties, being direct is the best way to go. And if you find yourself on the receiving end, take some time to learn from and process your relationship, but don't let fear prevent you from getting back in the game.

Using Amazon's Mechanical Turk, we collected responses from 1,136 people who had either been broken up with or had broken up with someone at least once. Only people who owned a cellphone with texting capabilities completed this survey. 58.2 percent of participants were women, 41.5 percent were men, and less than 1 percent were nonbinary. 7.8 percent of participants identified as lesbian, gay, or bisexual, and 91.7 percent were heterosexual. Less than 1 percent were asexual or chose not to identify their sexual preference. Participants ranged in age from 18 to 82, with a mean of 35.6 and a standard deviation of 10.6. We weighted data to the 2016 U.S. census for age, state, and gender.

Don't just disappear on us. If you enjoyed our study, feel free to share it on your own site for any noncommercial use. We're not asking for a serious commitment, just link back to this page so that our contributors get credit for their work too.