The U.S. international trade is big business! It is worth $4.9 trillion every year.

China, Canada and Mexico are the nation's biggest trade partners, trading almost $1.9 trillion worth of imports and fares.

International trade is a vital part of every country's economic prosperity and growth, but trade partners, like all relationships, can sour. This generally has more to do with politics than products.

The Importance of International Trade

The employment of over 41 million Americans workers relies on international trade.

The success of businesses and manufacturing in the U.S. depends on the buying and selling of materials and products to maintain the country's economy.

The U.S. has trade agreements with 20 countries that maintain a level playing field for imports and exports.

North American Free Trade Agreement (NAFTA) NAFTA is a trade agreements between the U.S., Canada and Mexico. Trade with Canada and Mexico keeps 14 million workers in jobs and generates $1.3 trillion annually in goods and services.

U.S.-Korea Free Trade Agreement (KORUS) This trade agreements was signed in March of 2012 and the only one the U.S. has in the Asia-Pacific region.

Let's have a look at U.S. international trade and see how politics are affecting trade partners.

The top five trade partners who import the most American produced goods are Canada, Mexico, China, Japan, and the U.K.

Canada remained the biggest importer of American goods throughout 2016 and increased imports by almost 6% in 2017. 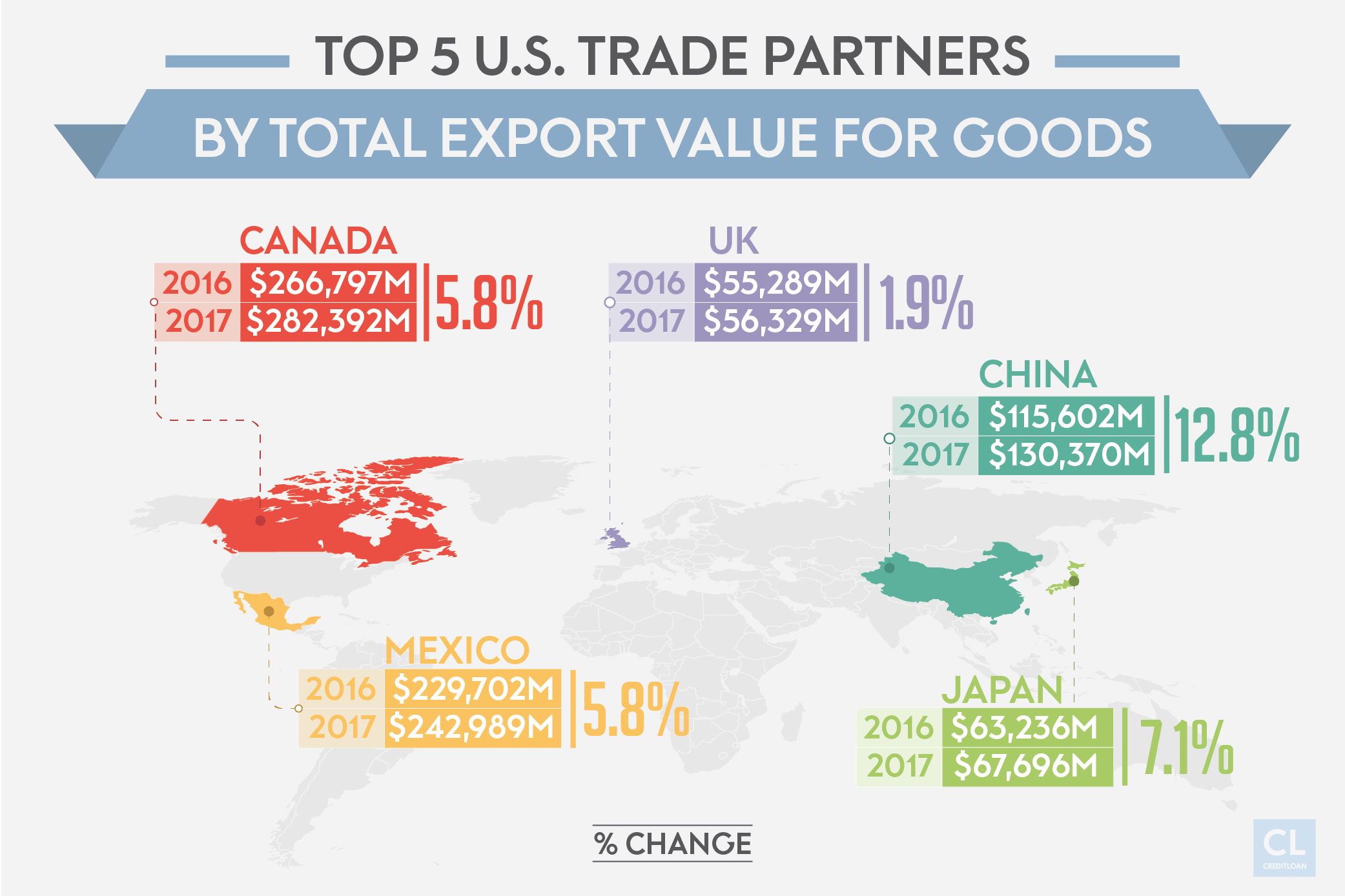 The U.S. imports goods valued at over $1.5 billion more from China than its next biggest trade partner, Mexico. 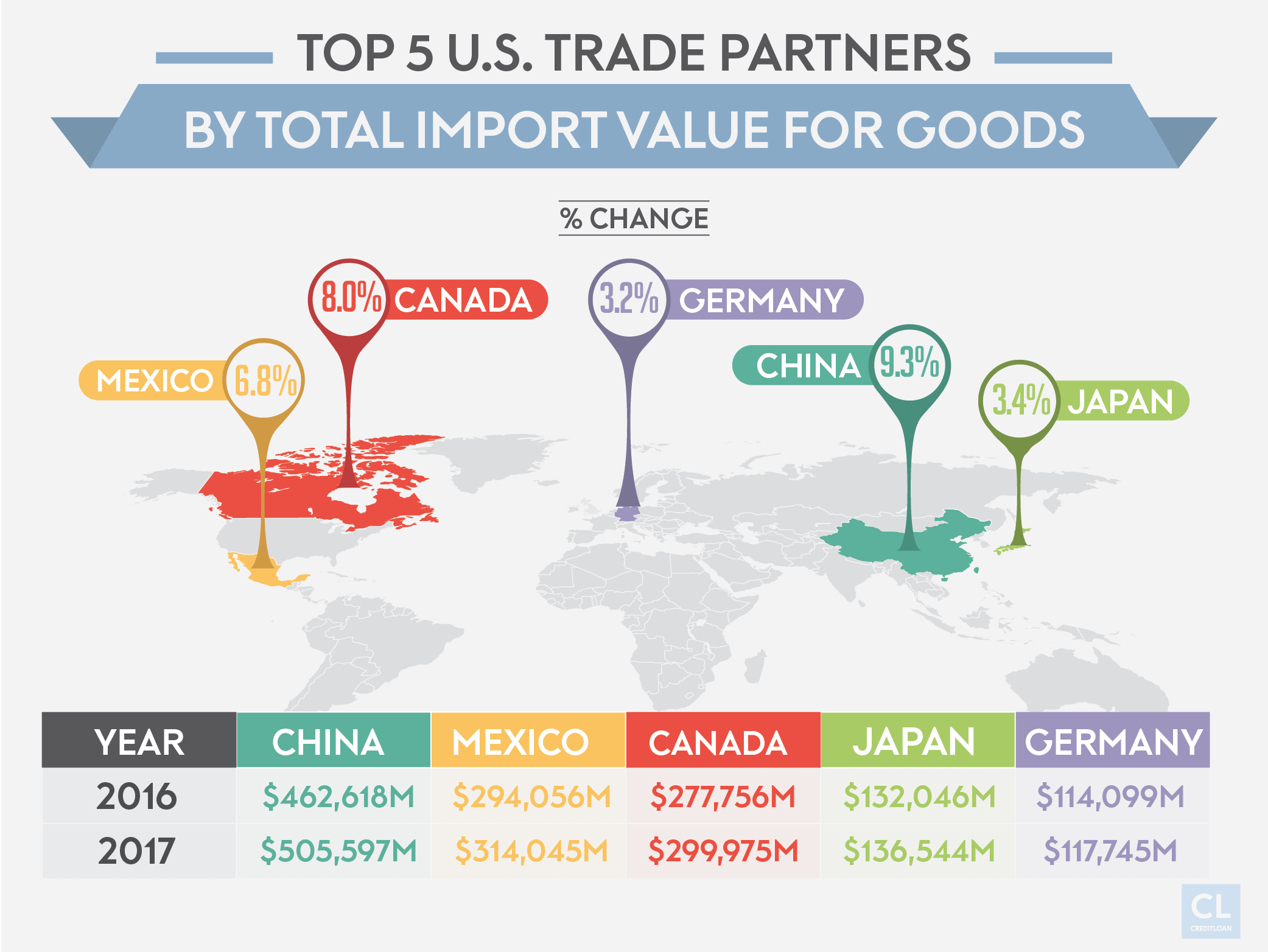 What is the U.S. Trade Deficit?

A trade deficit means a country is importing goods valued at more than it is exporting.

The U.S. trade deficit sits at around $450 billion, representing 2.5% of the Gross Domestic Product (GDP).

For example, the U.S. incurs a huge trade gap with China.

Americans import more than $45 billion worth of Chinese goods, but China only imports less than $10 billion of American goods. 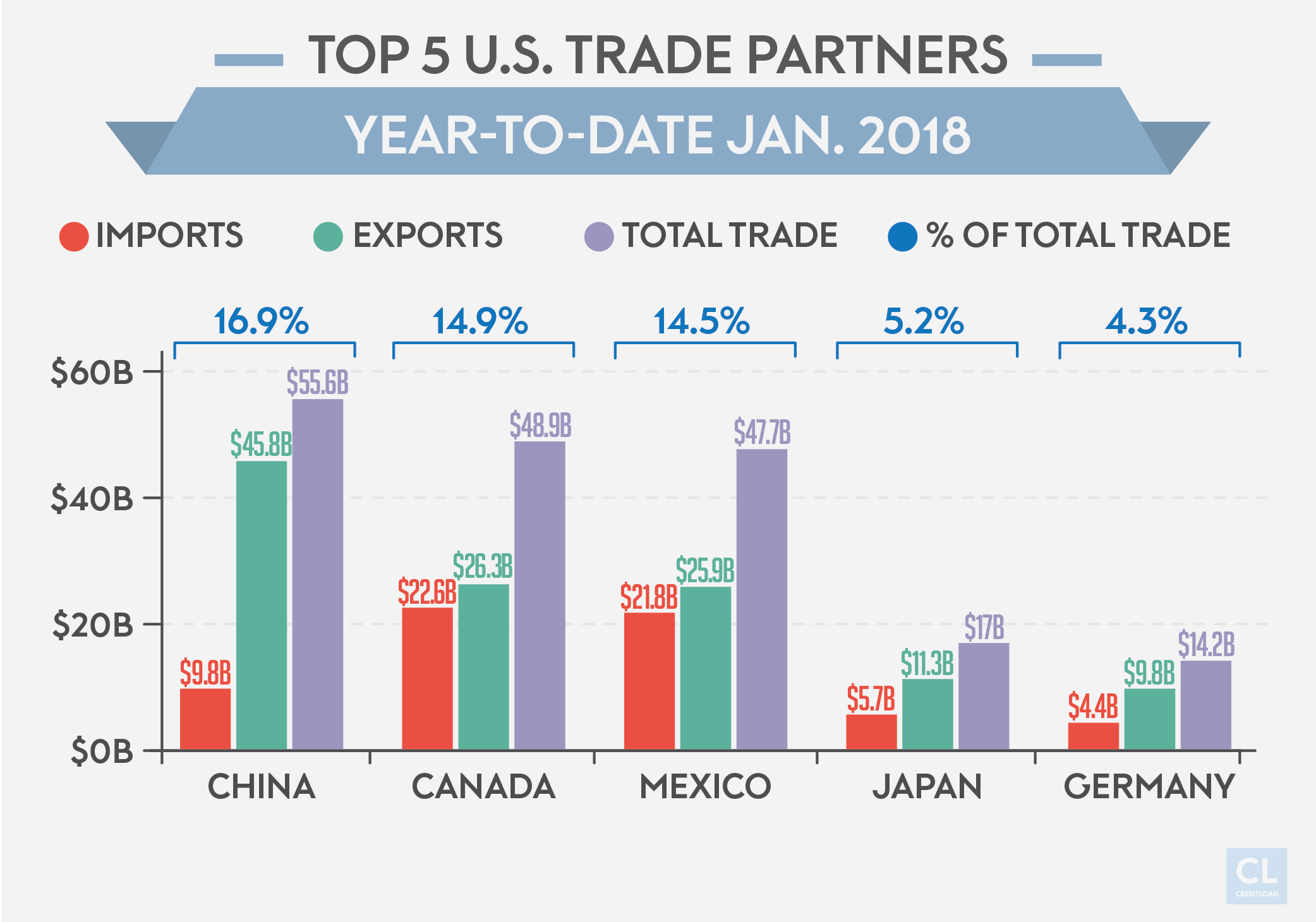 In 2018, China is the biggest trade partner to the U.S., with imports and exports totally almost $56 billion.

The Chinese make a better profit off the U.S. as it sells more product than it buys creating a trade gap with the Americans.

At only 18% of all Chinese exports, the U.S. is still its largest trading partner.

China trades with many countries around the world.

South Korea exports the most products and services to China, whose main imports are electrical and electronic equipments and crude oil, iron ore, copper and aluminum.

Since China is literally on the other side of the world from the U.S., products have a long way to travel.

About one-third of all trade is flown between the two countries and almost two-thirds travels by ship.

Over half of all trade between the U.S. and Canada occurs through only three border crossings all into and out of the province of Ontario.

It is not only the geographical convenience that makes Canada one of the U.S.'s top trading partners.

Canada is the primary source of all American foreign oil. However the price of oil has declined over the years making it less lucrative for the Canadians.

Only 52% of imports to Canada come from the U.S. China is also Canada's second largest trade partner.

Canada has now fallen into second place as China becomes the U.S. number one trade partner.

Mexico and the U.S. also enjoy an easy delivery of goods being neighbors, and almost half of all trade between the two countries travels through border crossings in Port Laredo and El Paso, Texas.

80% of all Mexican exports go to the U.S. The most popular are manufactured products and oil and oil products.

However,only 47% of imports to Mexico come from the U.S. 18% come from China. Its main imports are metallic products, machinery and equipment.

The biggest U.S. industries that are not selling to foreign countries are cars and car parts, clothing and oil. 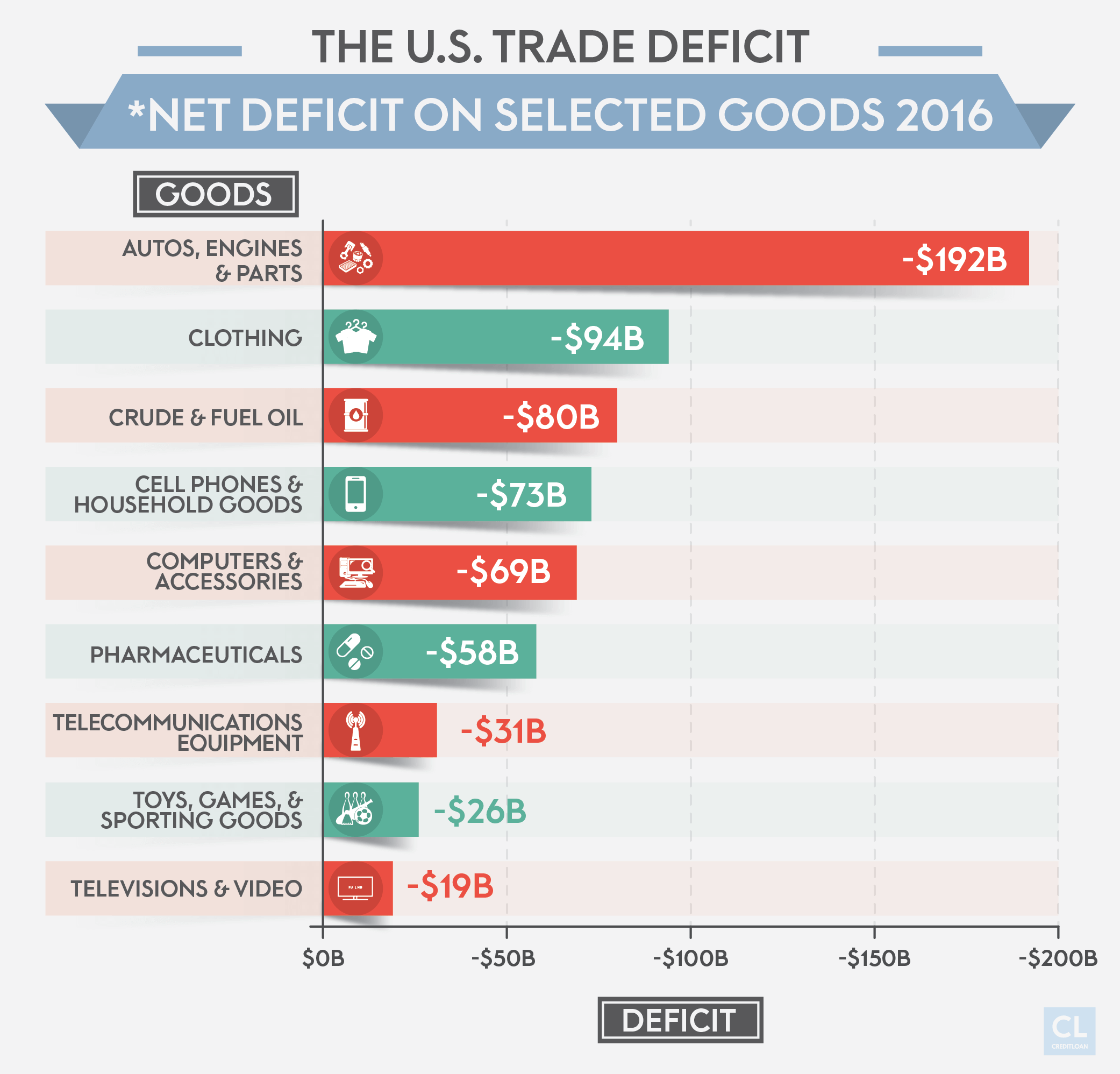 On the other hand, the biggest selling U.S. industries to trade partners were all service-based.

Travel and tourism, intellectual property rights and financial services made the U.S. $234 billion in 2016. 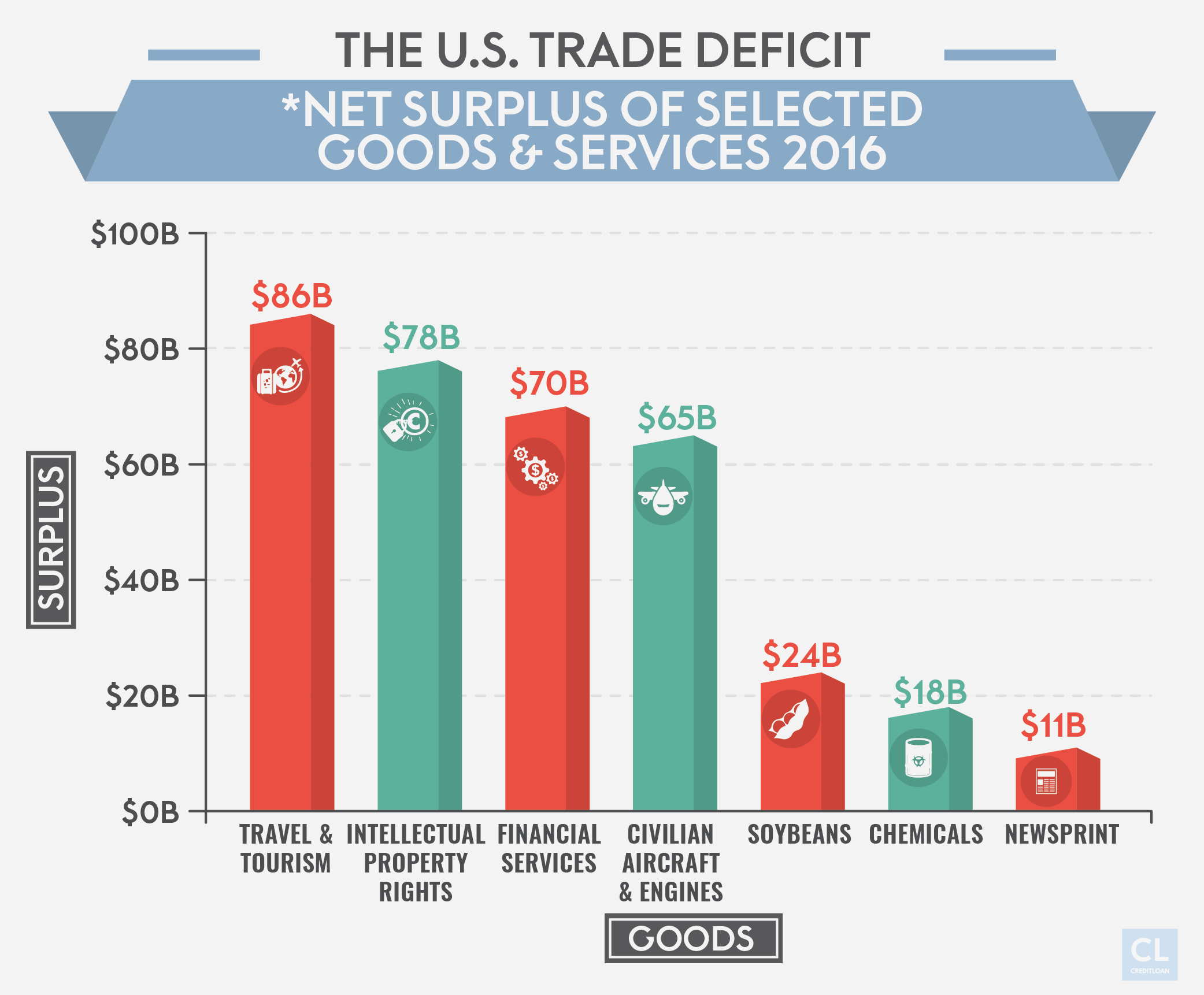 A tariff is a tax places on imports which (in theory) make foreign products more expensive for Americans to buy than the same product made by a manufacturer in the U.S.

Tariffs are signed into law by the U.S. government and are meant to protect American industries, but as they may help one industry, they could negatively affect another.

For example, President Trump recently signed into law tariffs of 25% on steel and 10% on aluminum imports.

While this may increase the costs of these products putting more money into those industries, American companies that rely on steel and aluminum have to pay more.

Ford, General Motors, Boeing, and Anheuser-Busch will all bear the brunt of the rising costs and that could lead to layoffs in their factories, as well as making it more expensive for Americans to buy products like cars and beer.

The steel and aluminum import tariffs could very well lead to a trade war.

Countries whose exports become subject to import tariffs can retaliate by imposing their own tariffs on American exports. This reaction is called "protectionism" and is terrible for international trade.

In response to the U.S. tariff on steel and aluminum, the European Union has indicated it is considering import tariffs on Harley-Davidson motorcycles, bourbon, Levi's, peanut butter and cranberries.

These responses can escalate leading to political tensions between countries, called a trade war.

U.S. trade partners are most likely to impose retaliatory tariffs or to block completely American industries that are producing a surplus, like airplanes, negatively hitting the bottom line of domestic producers.

Tariffs can eventually reduce the deficit, but it is unlikely that the recent steel and aluminum tariffs will change anything.

The U.S.'s biggest selling exports are no longer goods, but services.

In 2016, U.S. international sales of travel and tourism services brought in $86 billion. Providing intellectual property rights services to other countries made $78 billion, and U.S. financial services overseas made $70 billion.

These services made more than the biggest American export of products – civilian aircraft and engines – which made $65 billion in 2916. Or soybeans, which was the next largest American-produced export in 2016 bringing in $24 billion.