Everyone needs a vacation.

Which is why it's so surprising the majority of American workers (52%) don't use all the vacation days they have coming to them.

Tens of millions of travelers visit the U.S. and international destinations every year, and they spend billions of dollars.

Taking a look at the numbers for the business of American vacations shows us how much people are spending on travel and what they are spending their holiday dollars on.

Even though Americans are taking more vacation days, their trips are getting shorter

Among all domestic and international travelers, the average number of trips went down overall over the last four years.

In 2013, the average number of trips travelers took over the previous 2 years was 3.

By 2015, the average trips taken by travelers had dipped to 2.2 for the previous 2 years.

The most recent 2017 stats show the average number of trips taken by travelers has increased to 2.5, but that's still a half trip less per year per traveler than 2013.

Length of stays are getting shorter. Back in 2013, the average number of nights people stayed on their trips was a full ten days.

By 2017, travelers had lost an entire night's stay on average, with only 8 nights per visit.

Which means in 2013 people were making more trips and staying longer compared to 4 years later in 2017.

Americans are taking more vacay days. On the other hand, the number of vacation days people are taking from work has increased over that period.

Back in 2014, the average number of vacation days people were taking was 16.

The "staycation" is clearly popular. Even though people are taking fewer and shorter trips, the number of days they're taking off work is increasing.

That suggests they're spending their vacation days at home more than ever before. 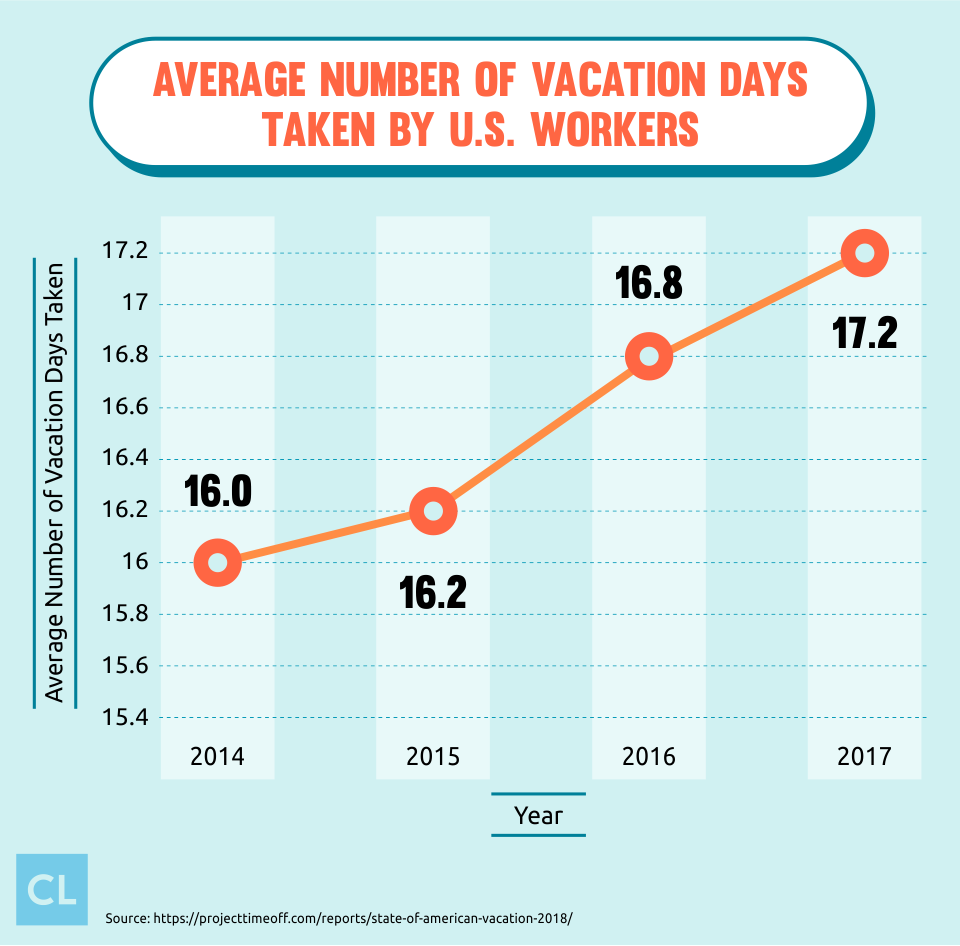 Over half of us fail to use our vacation days. Although the number of workers leaving vacation days unused is getting smaller, the overall percentage is still over 50%.

Back in 2015, 55% of workers with earned paid vacation days in the U.S. didn't use all of the ones they had coming to them.

Which still means more than half of all American workers are leaving paid vacation days on the table each year. 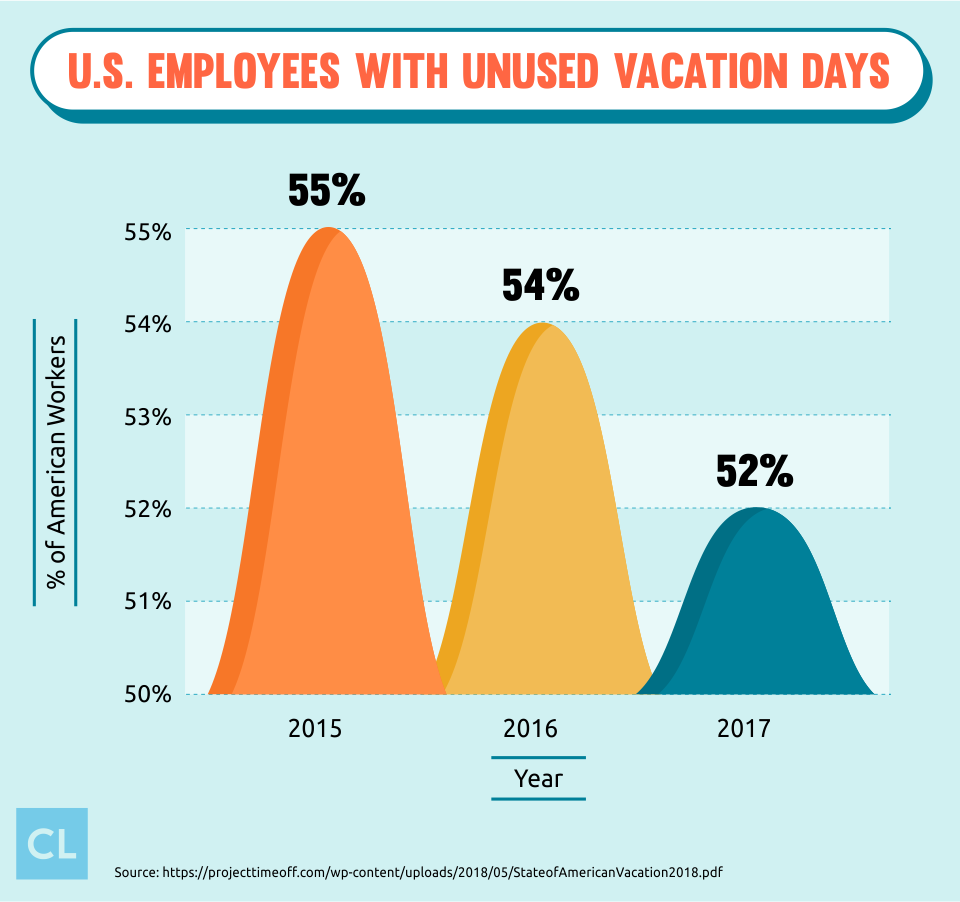 The U.S.A. is the Second Most Visited Country for International Travel

So where are all these travelers choosing to go when they visit other countries?

According to Visa's Annual Travel Survey, in 2017 the top destination among international travelers over the previous two years was Japan.

The United States was a close second, attracting 18% of all international travel.

The third most popular country as a destination for international travelers was Australia, with 15% of all trips going Down Under.

Hong Kong and Thailand tied as the fourth most popular international travel destination, with 13% of trips apiece. 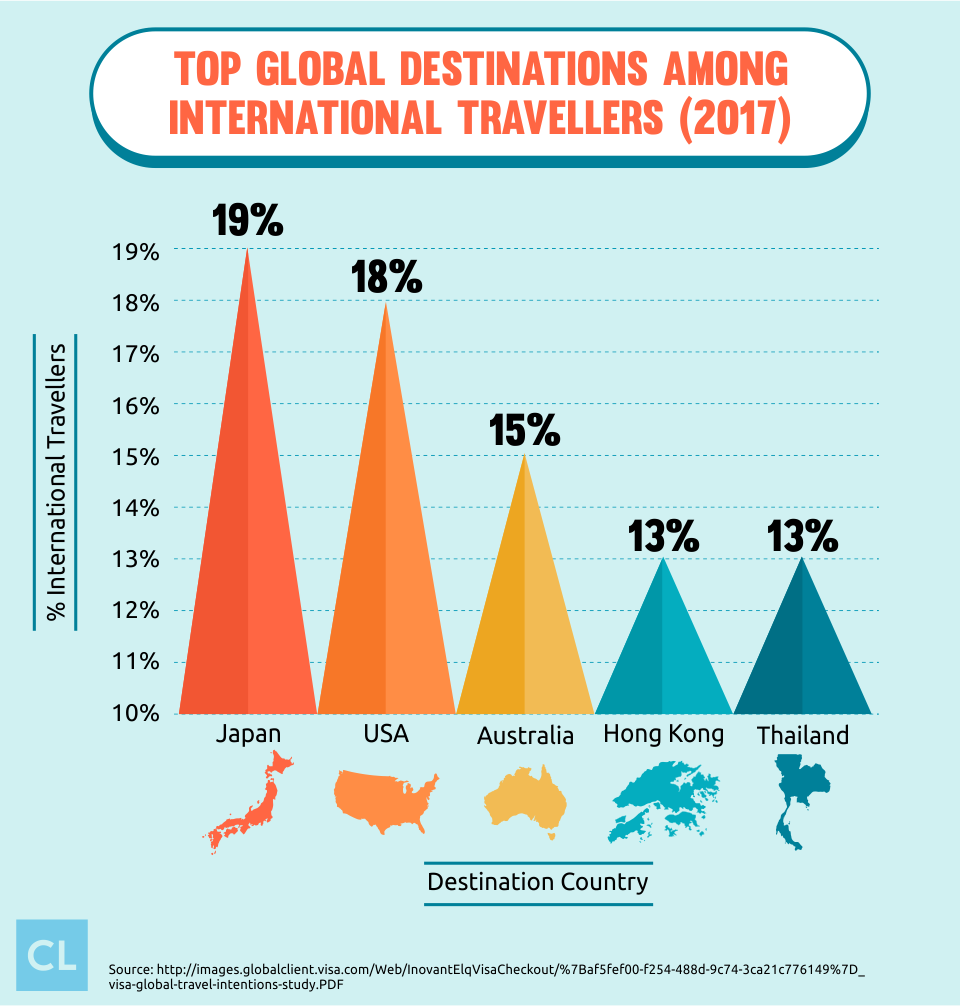 Travel spending in the U.S. surpassed $1 trillion in 2017

The U.S.A. is a hugely popular destination for international travel, but the data also shows American destinations are popular among U.S. residents too.

The total amount of money spent by travelers from both the U.S. and abroad in 2017 was $1.03 trillion.

Of that $1-trillion-plus total, $718.4 billion was spent on leisure travel among Americans and international visitors.

U.S. residents alone accounted for $605.5 billion of those dollars, which means Americans are responsible for 84% of the total travel spending in the U.S.A.

The previous year the average was ten percent lower, at $1,798.

Baby Boomers (55-plus) fell into the middle for vacation spending at $1,865 per person.

The average total expenses per trip to the U.S.A. among international visitors was $4,360 in 2017. 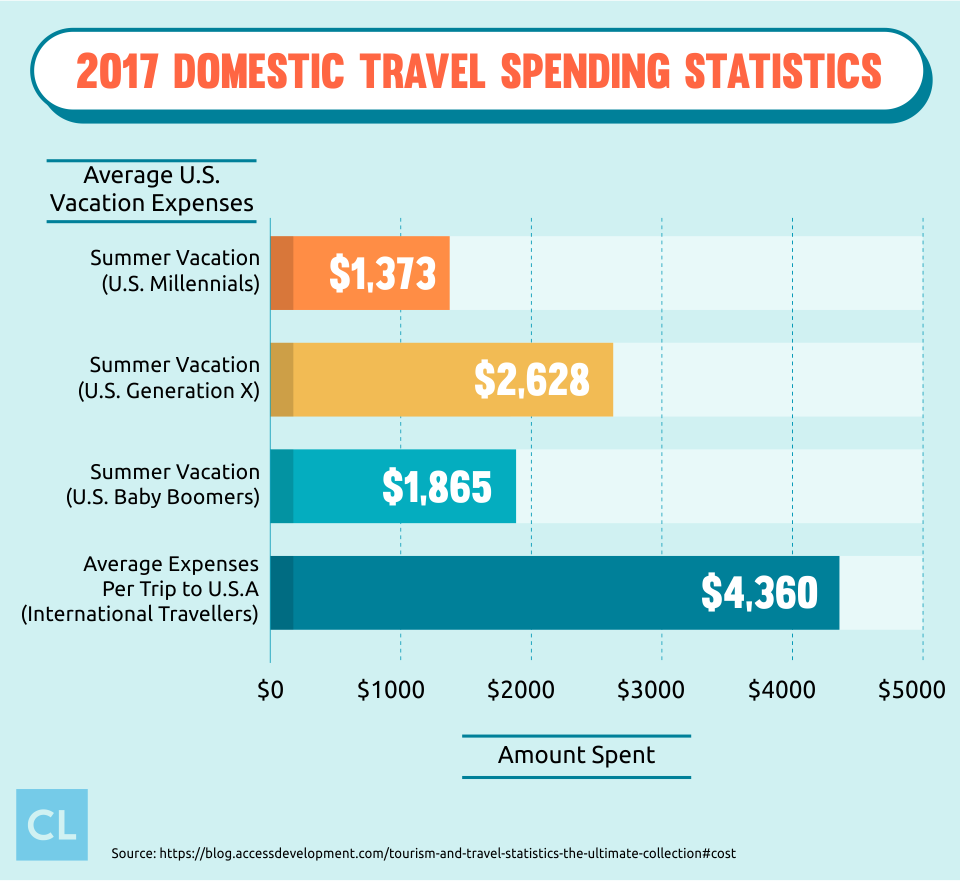 What people spend their money on when traveling in the U.S.A.

Food eats up a quarter of all domestic travel dollars spent

When we look at the mix of what people spend their money on when they're traveling in the U.S.A., food comes at the top of the list with 25% of all dollars spent.

Lodging and public transportation account for 20% each of domestic travel expenses.

Traveling by car accounts for 17% of the average travel budget in the U.S.A., and we spend $10 out of every $100 on entertaining ourselves with recreation and amusement.

Retail spending is the sixth biggest expense, accounting for 7% of travel budgets in the U.S.A. 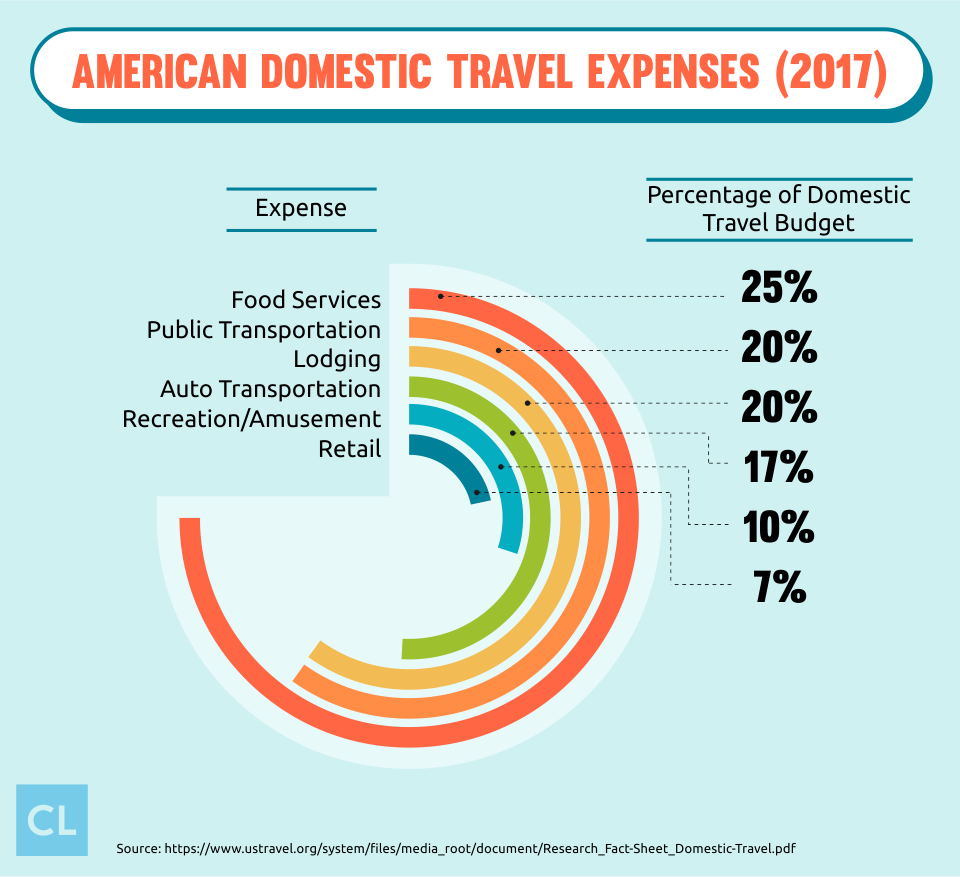 How Many of the Top 25 U.S. Travel Destinations Have You Visited?

You could easily spend every summer of your life traveling around the U.S.A. and never run out of destinations.

The list of the top 25 places for people to visit in America ranges from major cities to historical landmarks to isolated national parks.

The Grand Canyon tops the list. As one of the Seven Wonders of the Natural World, Arizona's Grand Canyon remains the most popular tourist attraction in the U.S.A.

The second-best tourist destination in the United States – Manhattan in New York City – is impressive for its man-made features rather than its natural beauty.

6 of the top 25 are National Parks. Yellowstone National Park (which includes areas in Wyoming, Idaho, and Montana) comes in at #3.

People love visiting U.S. historic sites. The historic Golden Gate Bridge in San Francisco, California is #4 on the list of the best destinations in the U.S.A.

Natural beauty attracts travelers. The rest of the list of the best places to visit in the U.S.A are natural attractions.

Visiting Niagara Falls (New York, #5) has to be on the top of the list of destinations for anyone visiting the Great Lakes region.

The natural beauty of Kilauea in Hawaii (#6), the Florida Keys (#7), Sedona Red Rock Country (Arizona, #13), and Carlsbad Canyons (New Mexico, #16) should also be on everyone's bucket list, whether they live in the U.S. or are just visiting. 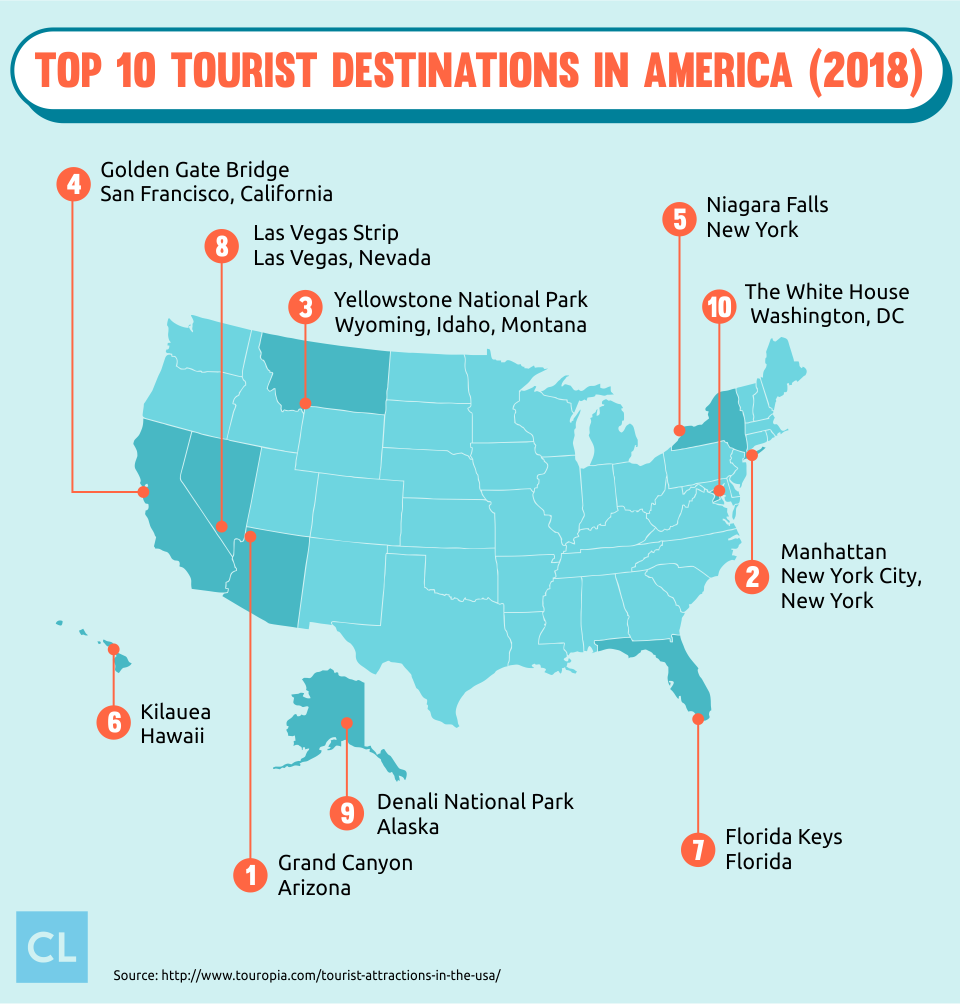 Vacationing in America is a Thriving Industry

With travel expenditures in the United States surpassing one trillion dollars for the first time in 2017, the business of American vacations is clearly booming.

Americans might not be staying as long on their trips, and their trips might be getting fewer and fewer.

But summer vacations are seeing higher spending each year, which means we're making the most of the precious vacation time we do take.

Although more than half of U.S. workers aren't redeeming all of the paid vacation days they have coming to them, they are still traveling extensively (especially domestically).

With so many incredible destinations right here in the U.S.A., it's no wonder we Americans ourselves account for 85% of all the travel spending that happens here.