Why does the US spend so much on defense?

The US foreign policy dictates military spending. Its priorities are border defense and upholding international order, as well as promoting and protecting global American interests.

According Todd Harrison, director of defense budget analysis at the Center for Strategic and International Studies in Washington, US military size is based on the ability to fight more than one conflict at a time in Europe, the Middle East and Asia-Pacific.

It seems most countries are spending more on defense. Increase US military spending triggers increased defense spending around the world.

Experts believe this to be an effect of a growing global economy since global military spending is down to 2.2% of the GDP compared with 2.7% from the previous year.

Top 8 Countries Who Spent the Most of Defense In 2016

While the US spends the most dollars on the military, almost 14% of Saudi Arabia's GDP goes to military spending. 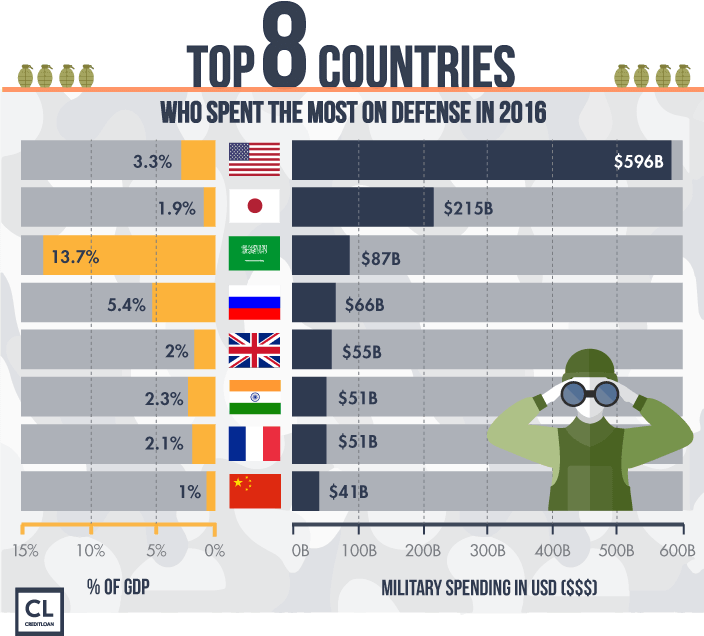 Eastern Europe will have the fastest growth of defense spending in the world, nearly doubling spending from 2014.

Russia's defense spending will fall for the second year in 2018, reducing its GDP percentage on the military by 5%.

US defense spending is almost three times more than all other NATO members spending put together.

The US spends the biggest percentage of its GDP on the military. After that, only Greece, Poland, Estonia and the UK spend the mandated 2% or more of their GDP on defense.

However, that number will rise in 2018, when Greece, Estonia, Turkey, Latvia, England, Lithuania, Poland and Romania are all expected to hit the 2% GDP spending on defense. 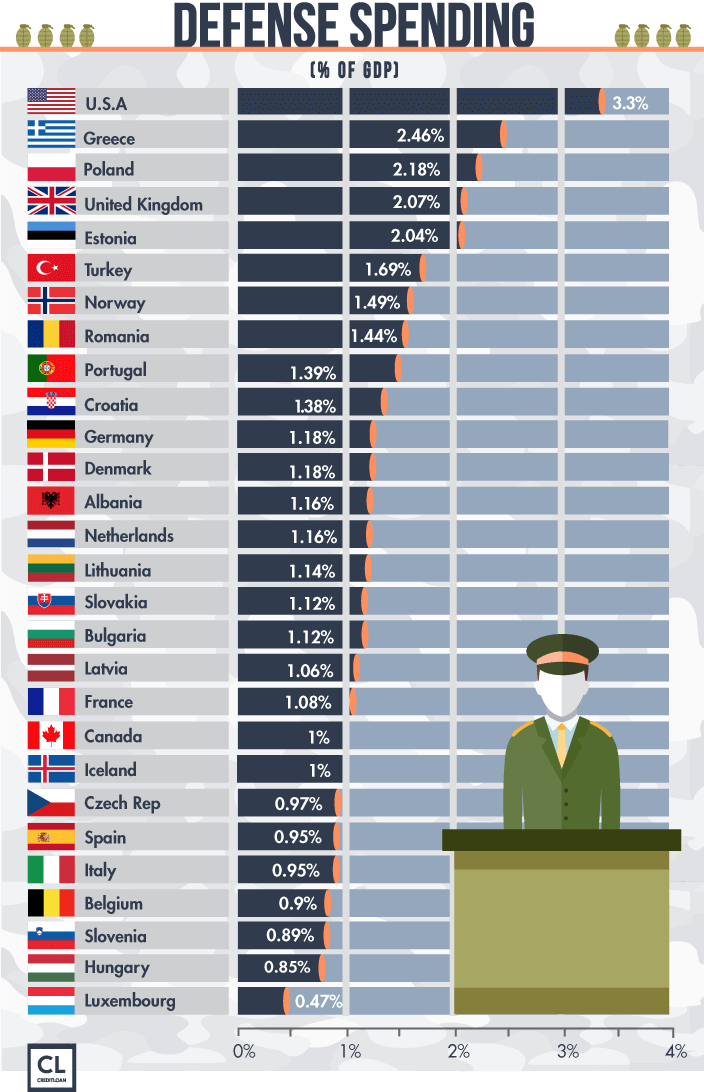 How Military Budgets are Spent

The US commands the skies with 13,362 aircraft and 10 aircraft carriers. The USS Gerald R. Ford aircraft carrier cost $13 billion and uses an electromagnetic launch system to scramble planes faster than ever.

However, Russia's military power is on the land with over 20,000 tanks. China has nearly 8,000 and the US has just above 5,000. With the huge geographical size of both Russia and China, it would make sense they spend money on tanks.

When it comes to naval superiority, North Korea has the largest number of ships (967), with China as a close second (714). The US is third with 415.

Countries with the largest number of troops also have booming populations compared to the US.

Military Spending: Past, Present and Future

Although the US defense spending is huge compared to other countries, it has actually decreased since 2007, while China's has more than doubled. 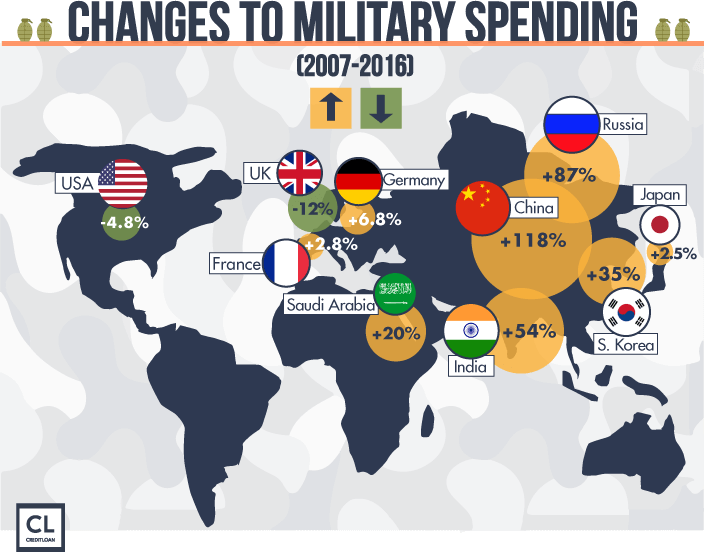 The US Defence Budget VS Other Federal Spending

The US does not spend as much on defense as it does on social security and Medicaid and Medicare.

The people of different countries have varying opinions on their country's military spending. For example, more than half of those in Poland think their country should spend more on defense, while only 14% of the residents of Spain agree.

Why do the people in Poland, the Netherlands, Sweden and the UK think their governments should spend more on defense?

In 2017, the deputy minister of Poland announced that the country would increase its military spending by $55 billion by 2032. The increase is said to be due partially to growing Russian aggression.

In 2014, the Netherlands reversed declining defense spending by increasing it by

$385 million until 2017. The government made this decision based on the political unrest in the Ukraine, as well as Russia's shooting down of Malaysian Airlines flight MH17, killing 196 Dutch citizens.

Sweden is also increasing its military spending due to recent Russian aggression in the Baltic countries, and reintroducing the draft. Its 2018 defense budget was raised by $250 million and by $750 million by 2020.

Although the UK's defense spending is up-in-the-air until it leaves the European Union, or Brexit, its military has been calling for increased military spending.

In March 2018, Rear Adm. Alexander Burton stated to the BBC 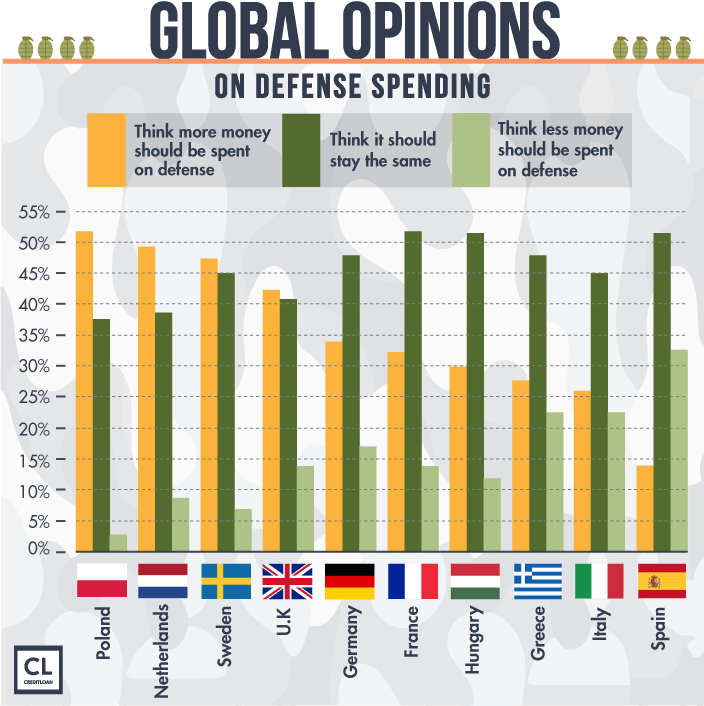 Much of the increased military around the world, including the US, has to do with modernizing equipment. Advancing technology can outfit planes, tanks and ships with faster and more effective capabilities, but it certainly isn't cheap.