Relationships go through stages and most dating experts say each one is an important step toward finding a genuine partnership. There are awkward glances, first dates, total infatuation, and even the worry of uncertainty, and every one of those moments fits into the progression of going from complete strangers to a committed relationship and beyond.

But where does money start to factor into the equation? How soon should you be asking someone about his or her credit card debt, and when is the right time to merge bank accounts?

Tradition holds that after couples get married, it's time to start thinking about merging bank accounts. After all, what's yours is theirs, right? Not necessarily.

While there are benefits to merging bank accounts including fewer financial surprises and general convenience, financial consolidation isn't without its struggles. Some people experience a loss of independence when they don't have their own bank account, and merged accounts can create headaches for couples who aren't communicating properly about their spending habits. Nearly 1 in 5 married respondents kept their checking accounts separate from their spouse. 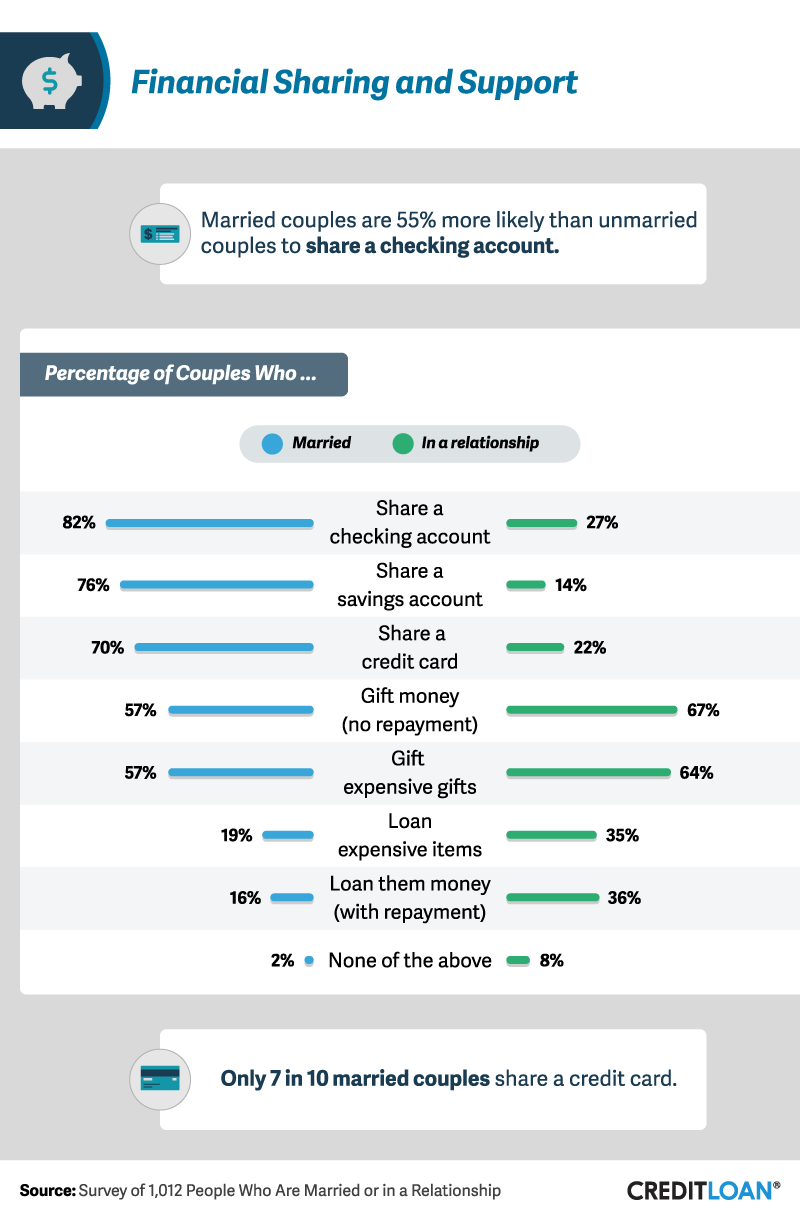 Even couples who merge their bank accounts may not be sharing everything. Having a shared checking account didn’t automatically mean savings and credit cards were also shared. Sharing account was more common for married couples, and unmarried couples were more likely to give their partners money without repayment and buy them expensive gifts.

To Combine, or Not to Combine

Deciding if, how, and when to merge finances can be complicated, and there's no right or wrong answer as to when a relationship is ready for this step. It's entirely possible for two people in a committed relationship (or even married) to have completely different philosophies toward money. 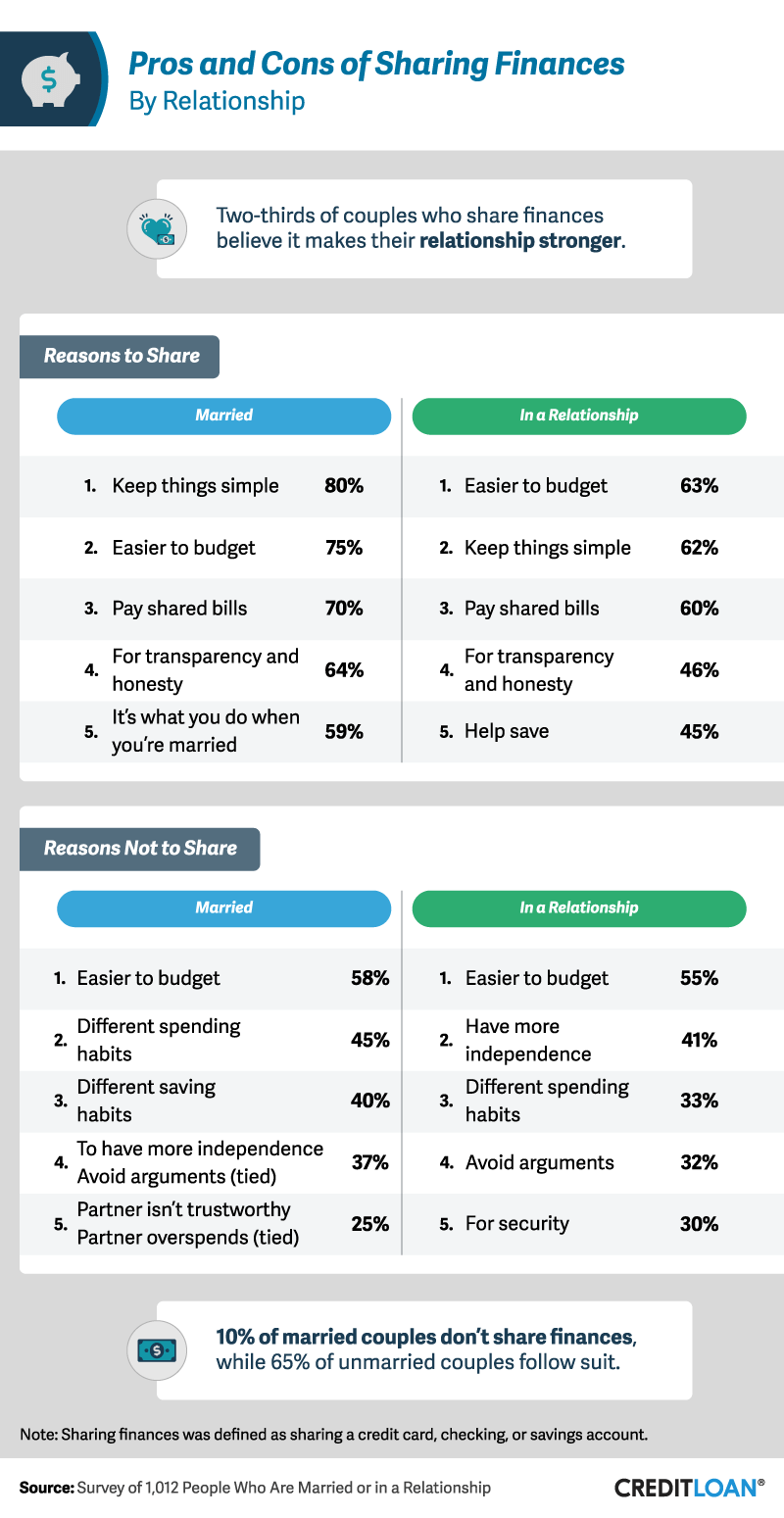 Making it easier to budget was also the most common reason why both married and unmarried people chose to keep finances separate. When it comes to money, some couples start off on the wrong foot, making it hard to recover and trust each other's habits. Having routine conversations about financial goals and practices can be just as important as the actions you take with your accounts – joint or otherwise.

For Better or Worse

"For better or worse, richer or poorer" doesn't mean married couples don't sometimes regret sharing their finances. Nearly 1 in 4 unmarried respondents confessed to having some financial regrets compared to more than 1 in 10 married respondents.

Putting all of your money in a shared space or merging credit cards can make money matters seem more straightforward or help encourage couples to create shared goals, but it can occasionally lead to trouble too. Money issues can sometimes ruin relationships, and while not communicating about finances often enough is at the heart of this strife, sharing finances can create conflict as well.

Money matters can also come between couples, leading to the relationship's demise. Roughly 1 in 10 people admitted to dumping someone as a result of financial discord, with the most prominent causes including someone living beyond their means, not having a job, and always expecting the other party to pay for things.

Couples who've been together for longer periods know the way you see each other can change dramatically. Even if things don't always work out exactly the way you planned, one thing is certain: The work you do together helps define your partnership.

By the time they were married more than 10 years, 98 percent of people polled had joined bank accounts with their spouse, 84 percent had joint credit cards, and 84 percent shared a savings account. Savings accounts are one of the most important elements of any financial plan and can be the difference between managing a financial emergency and having it turn into a financial nightmare. Considering half of Americans have no retirement savings at all, a majority of married people without joint savings may not have any savings at all.

While a vast majority of newly married couples established a joint checking account within the first year of matrimony, half of unmarried couples wait six years or more before making that financial commitment. Less than 1 in 4 unmarried couples with more than five years together had a combined savings account.

If an unmarried couple shares a checking account, both parties have a right to the assets held within. In the event of a breakup, a joint checking account could become a very complicated legal issue. Financial experts also warn about income tax issues and health-related financial issues for unmarried or domestic partners, which can often require special attention. 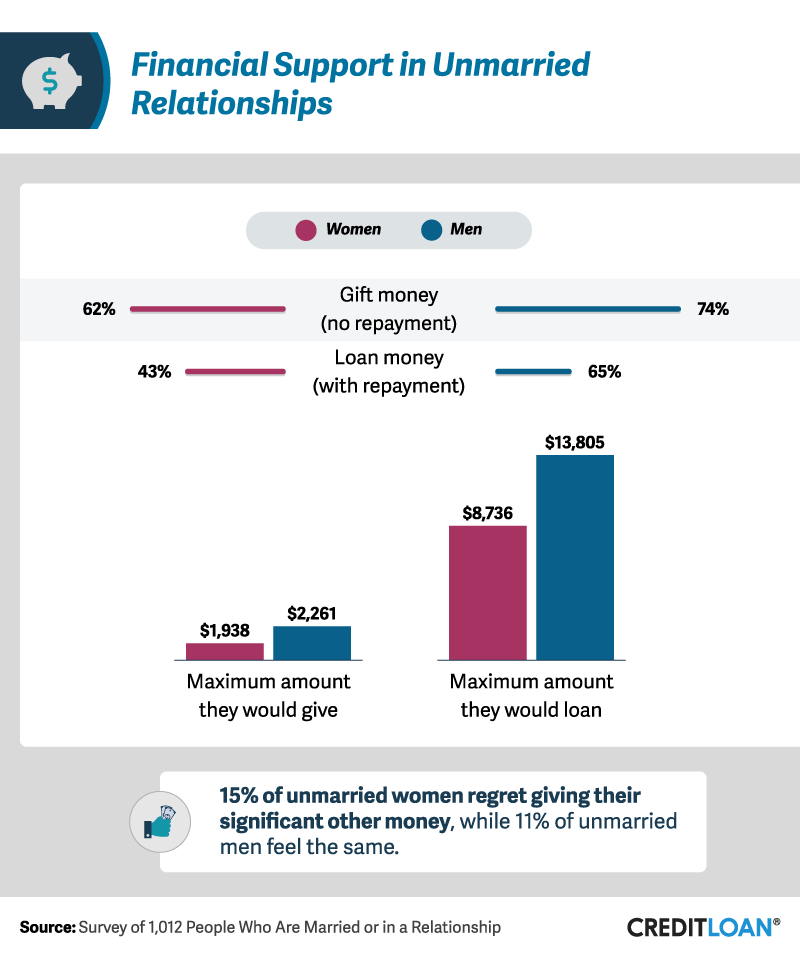 How couples approach their combined assets also shifts between younger and older generations. While just 5 percent of baby boomers regretted sharing finances with a spouse, 12 percent of Gen Xers and 14 percent of millennials said the same. Younger generations were also less likely to wait until marriage to merge accounts, including checking, savings, or credit cards. When asked about shared finances, husbands were more likely than wives to regret consolidating money matters. Women were also more likely to wait until marriage to combine their accounts, although less likely to consider it a necessity.

Like relationships, financial planning, budgeting, and saving take work too, even if they're established at a different pace compared to emotional investments. As our survey found, millennials were often the fastest to establish combined finances in a relationship but were also more likely than older generations to regret merging their assets. According to our study, roughly 1 in 10 married couples didn't share any of their finances at all.

We surveyed 1,012 people in the U.S. who were either in a relationship or married. A participant who identified as engaged was considered to be in a relationship since they were not yet married. They were recruited from Amazon's Mechanical Turk. Sixty-four percent of participants identified as female, 36 percent as male, and less than 1 percent did not identify with either gender. Participants ranged in age from 18 to 80, with a mean of 37 and a standard deviation of 11.35.

The sample size was 1,012 people in the U.S. who are either in a relationship or married. It is possible that with more participants, we could have gained more insight into this population.

Relationships are hard work, and financial growth is a part of that journey. If your readers have questions about when to bring up money with their partners, feel free to share the results of our study for any noncommercial use. We only ask that you include a link back to this page, so they can see the results of our study in full, and our contributors earn credit for their work.