The 1985 movie “Brewster’s Millions” is about an average person named Monty Brewster (Richard Pryor) who is eligible to inherit $300 million if he can spend $30 million in 30 days.

This challenge, however, comes with the following rules: 1) at the end of the 30 days, he cannot own anything he didn’t already have before, 2) anyone he has hired must provide value, and 3) he can only give 5% to charity and blow 5% on gambling.

We know the “super rich” blow their money on whatever they desire, but we wondered what the average person would do if they were given Brewster’s challenge.

We surveyed 319 people, and here are some of their answers…

It is no wonder Brewster immediately went in for some fine dining after he got his millions. Americans love to eat out.

In fact, for the first time in recorded history, we spent more money on eating out than on buying groceries. In 2015, we spent $54.857 billion at restaurants and only $52.503 billion at the grocery store. 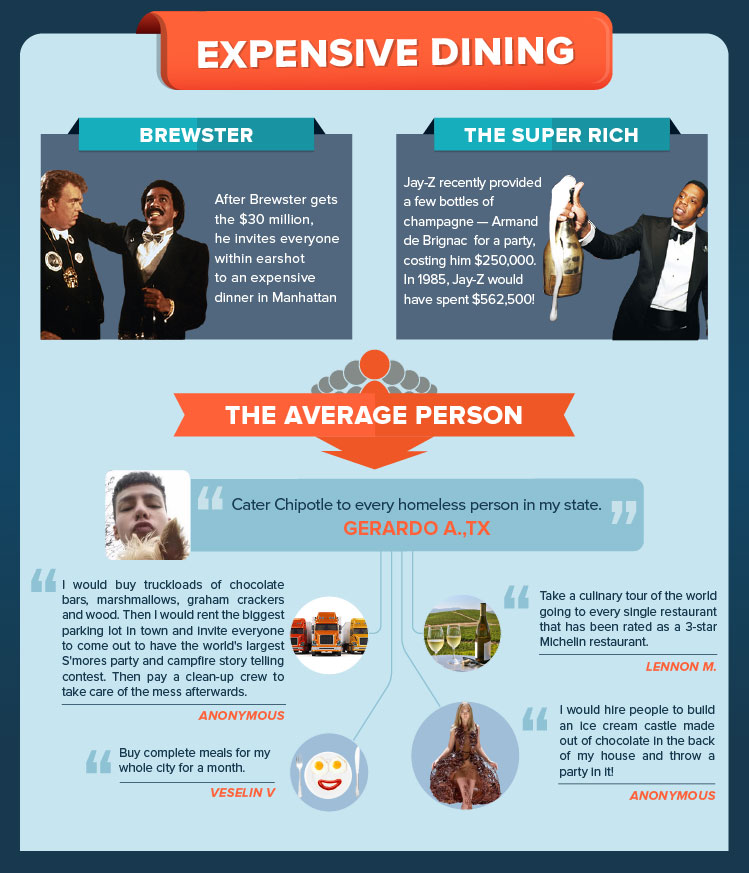 Apparently it is the younger generation who have been pushing the restaurant bill. On average, Millennials eat out 3.4 times per week while the older generations are only treating themselves 2.8 times.

Most of us don't have the luxury of personal assistants, maids, chauffeurs or personal chefs that cater to the Super Rich, but that doesn't mean we don't dish out dollars to get an occasional or regular cleaning service in to scrub floors and toilets. 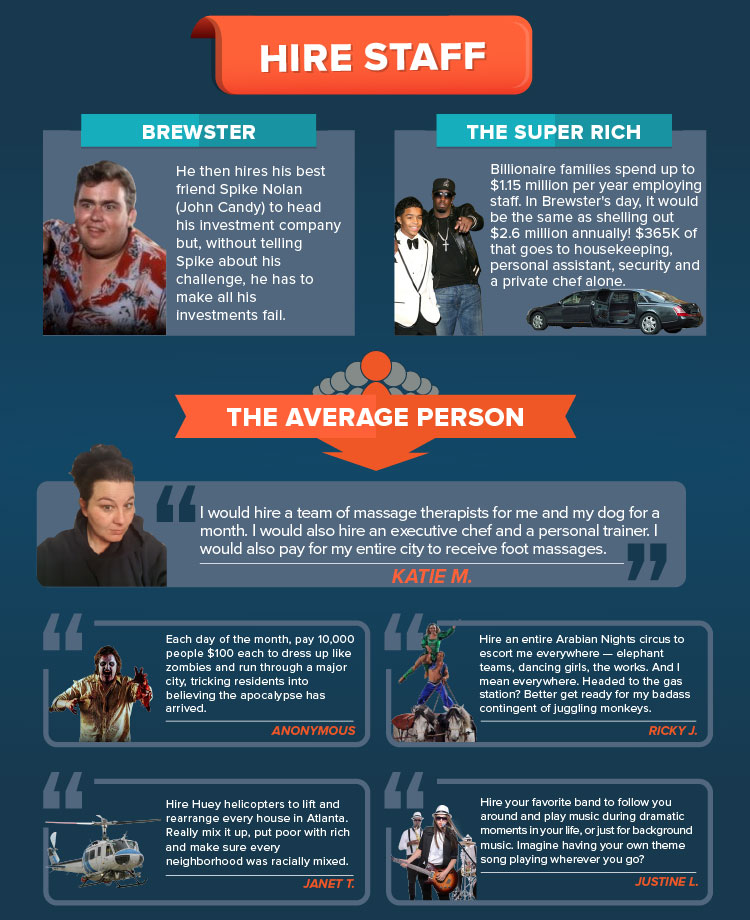 In fact, it can be more economical to have your home cleaned on a regular basis than twice a year. A one-time service can cost $200-$300, while a regular service can cost you less because your cleaner will come to know the routine of what needs to be done in your home and then do it quickly. 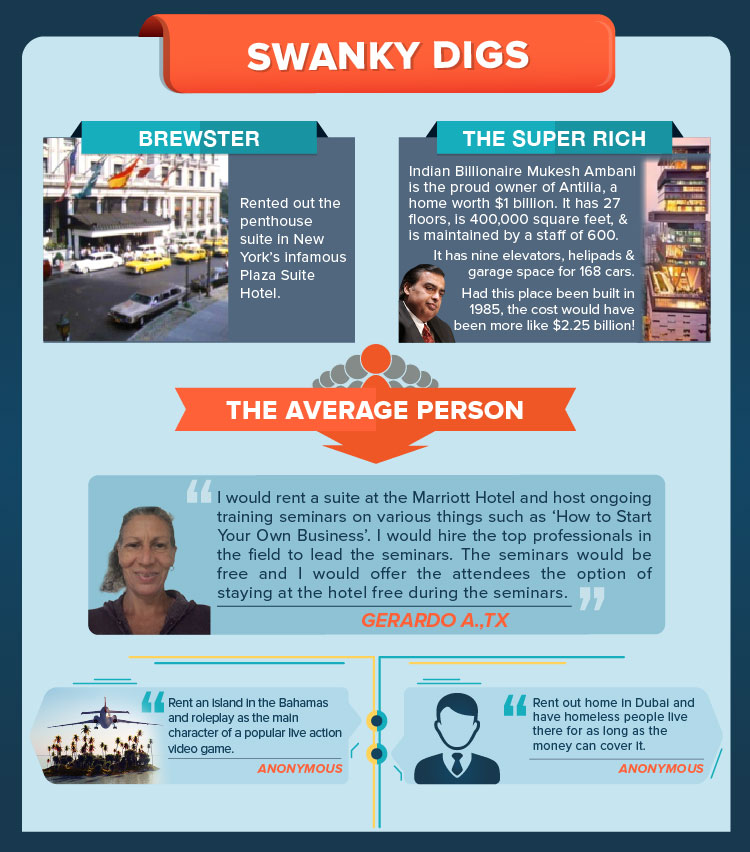 The good news is that homeownership has become more affordable with low interest rates on mortgages. So maybe we should invest in those swanky digs instead?! 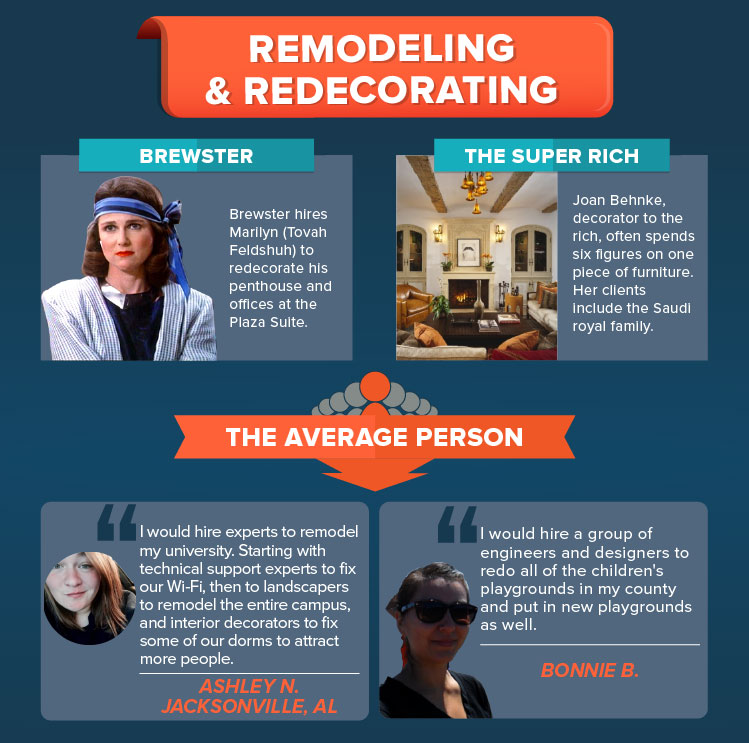 With skyrocketing rents, it is no surprise that homeowners are investing in home improvements. Americans set a new record of $324 billion on remodeling and redecorating their homes in 2015 and are expected to spend even more this year.

Think of the man cave you could design with Brewster's millions! No one would ever see me again.

Travel trends indicate we are spending more to take vacations. In fact, this summer we doled out 11% more on vacations than last year mostly due to the increased cost of travel. Vacationers spent 40% of their vacation budget on getting to and from their destination. 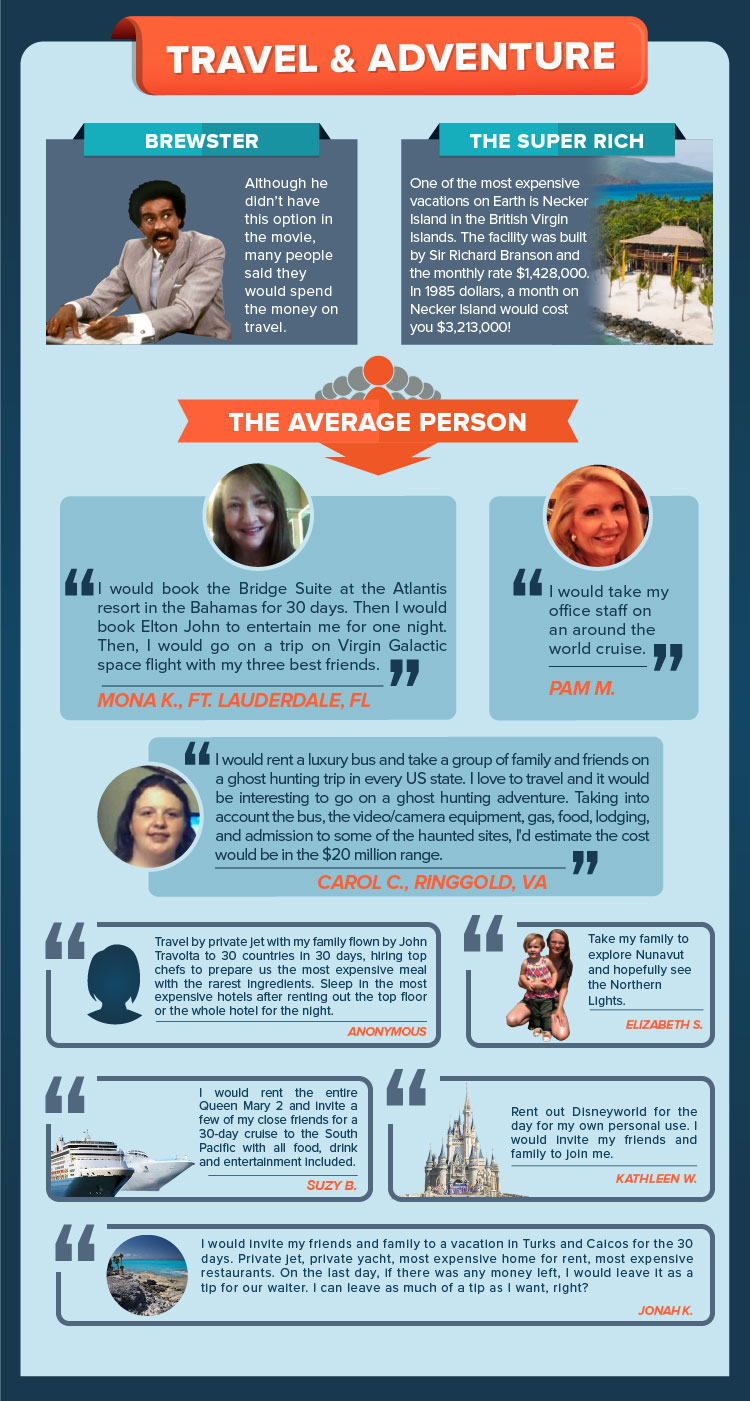 Seriously, take your vacation time. You have earned it even if you just sit home, order in and watch Netflix.

Say what you want about the US, but you cannot say we are uncharitable. In fact, Giving USA — the organization that records American donations to charity — reported that 2014 saw a 7.1% increase in charitable giving to a total of $358.38 billion. Not only is this the highest amount on record, but it exceeds the old 2007 record of $355.17 billion (inflation-adjusted). 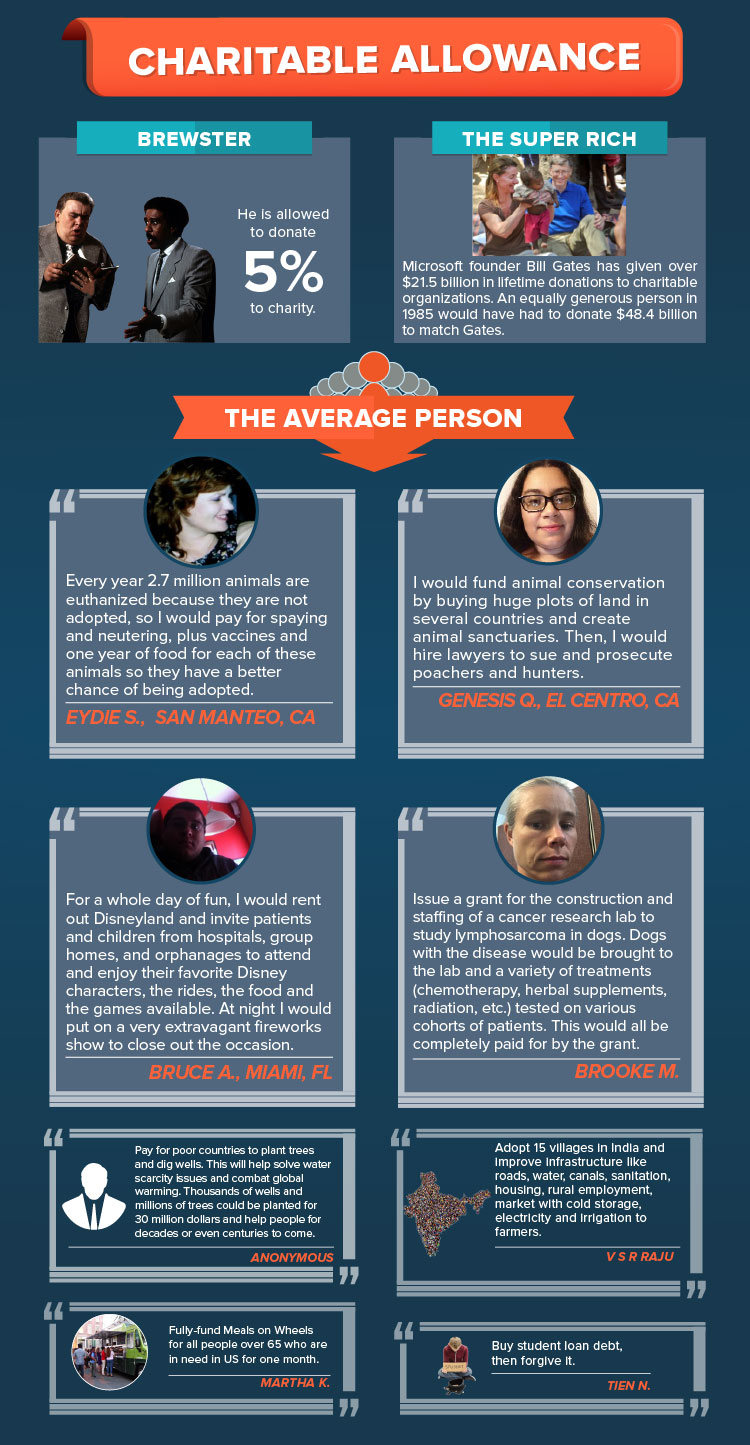 This points to a recovered US economy, according to W. Keith Curtis of the non-profit consulting firm The Curtis Group.

"The 60-year high for total giving is a great story about resilience and perseverance. It's also interesting to consider that growth was across the board, even though criteria used to make decisions about giving differ for each source." he said.

Spend it on Sports

The biggest sporting event in the US is unquestionably the Super Bowl and every year we spend more and more money celebrating it. We blew a staggering $15.5 billion on this year's Super Bowl weekend festivities. In 2015, the total Super Bowl party cost an average of $77.88 per fan. This year, that number was $82.19. I could eat out 3.4 times in one week on $82.19. 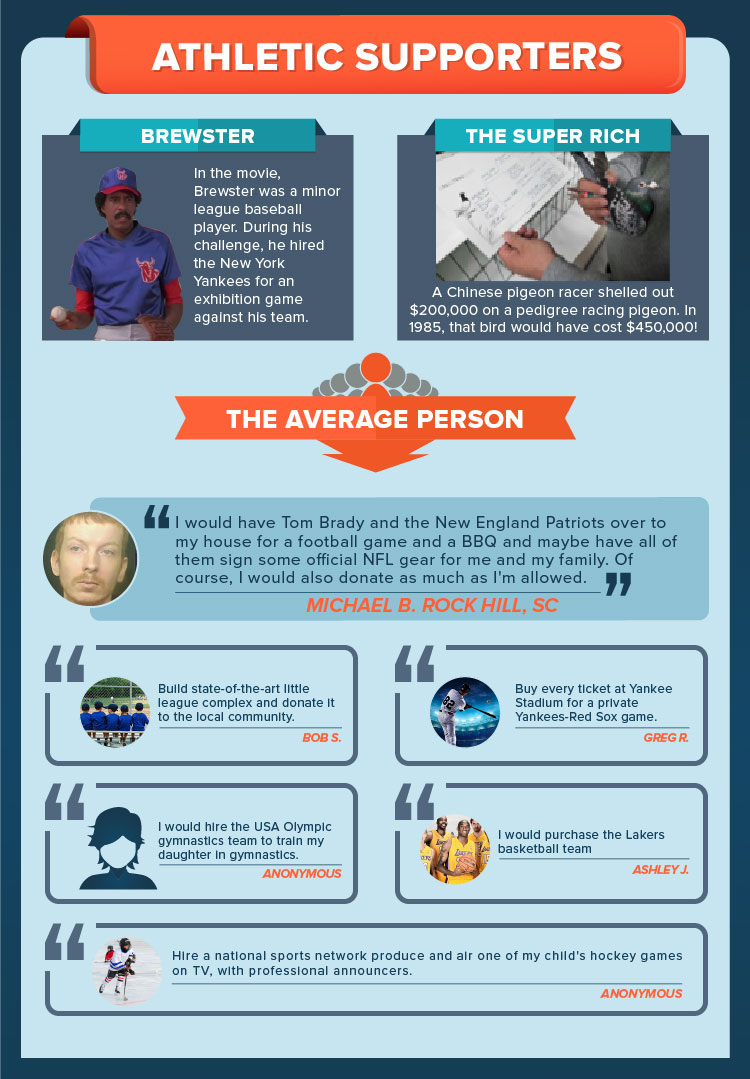 Invest in the Stock Market

Playing the stock market is always risky, but an astronomical 93% of investors lost money in January of this year. Luckily, there was a rally late in the month which helped to divert a financial disaster. 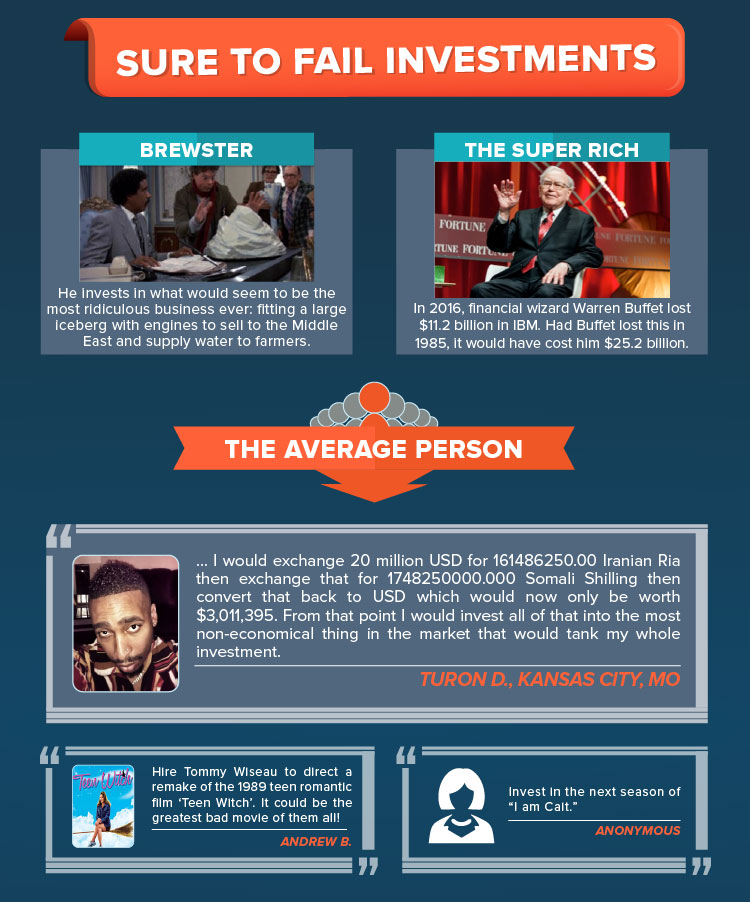 On the upside, it is great way to win the Brewster's million challenge. If he had invested everything last January, he would have most certainly won the bet.

Stamp collecting is an historical and respected hobby, but the interest of collectors is only limited by your imagination. Here are five odd, and probably not lucrative, collections from around the country. 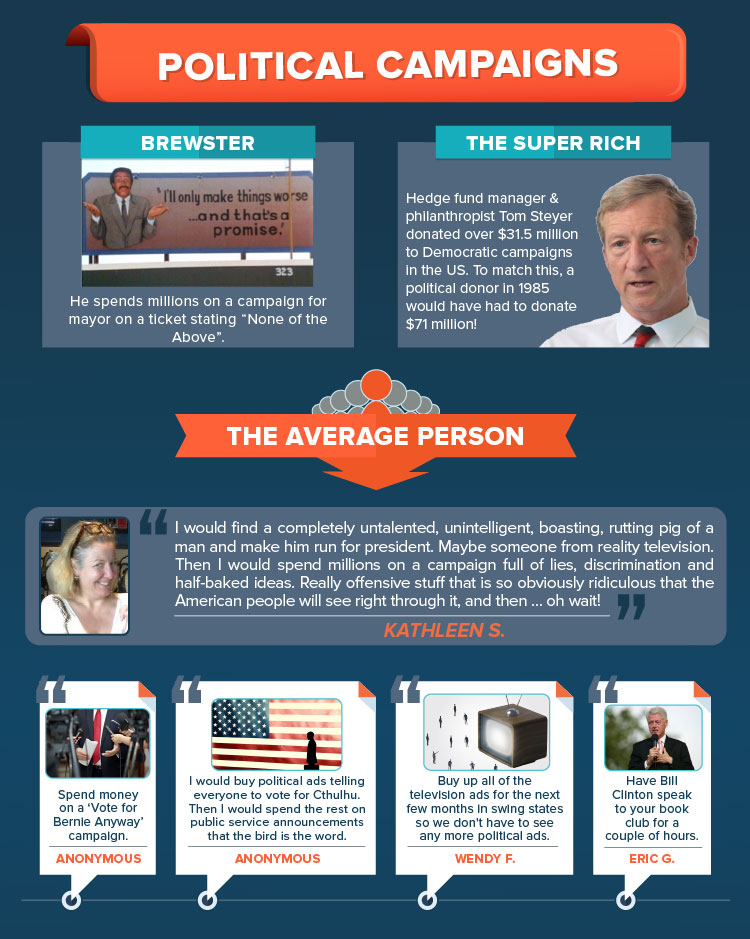 Politicians may rave about how many small donations they receive from ordinary Americans, but in actuality, very few Americans, only 10%, donate money to candidates, parties or PACs. Individual donations over $200 account for 2/3rds of senate campaign fundraising and 1/2 of house candidates. Those contributing less than $200 make up just over 10% for house campaigns and 15% of senate races.

Really, you can't blame us for putting our money elsewhere, like eating out 3.4 times per week.

So if you had the chance, how would you spend Brewster's Millions?

View the full image
Click the preview below for the full version: