From Venmo to Bank Apps: Americans Reveal Their Payment Preferences

Imagine going to a store counter to check out, and the cashier asks if it’ll be cash, credit, check … or something else. In a world full of mobile payment applications from banks, phone manufacturers, and other third-party peer-to-peer (or P2P) vendors, deciding how to pay for things has gotten more complicated in recent years.

As the number of options for mobile payment continues to grow, consumers are starting to take notice. In 2016, people around the world exchanged $17.6 billion on Venmo (a PayPal-owned P2P application), and in 2017, the app expanded to over 2 million retailers across the U.S.

With choices like Chase QuickPay, Google Wallet, Apple Pay, Square Cash, and more, consumers often want to know which apps are the most secure, convenient, and widely used. We polled over 1,000 people to see how they really felt about mobile payment solutions, how often they used them, and what their hesitations were over the future of digital currency.

With new apps almost every year promising to make transferring money more secure or convenient, it can be difficult to know which providers consumers trust enough to connect with their banking and financial data. With 80 percent of people trusting the security of bank transfer apps and 58 percent trusting the security of money transfer apps, PayPal and Venmo were the most popular payment apps.

Despite security concerns aimed at money transfer apps, analysts suggest mobile payments may be more secure than people think. Because financial information isn’t transferred through mobile payment applications, credit card details aren’t on file in the event of a hack or data breach. 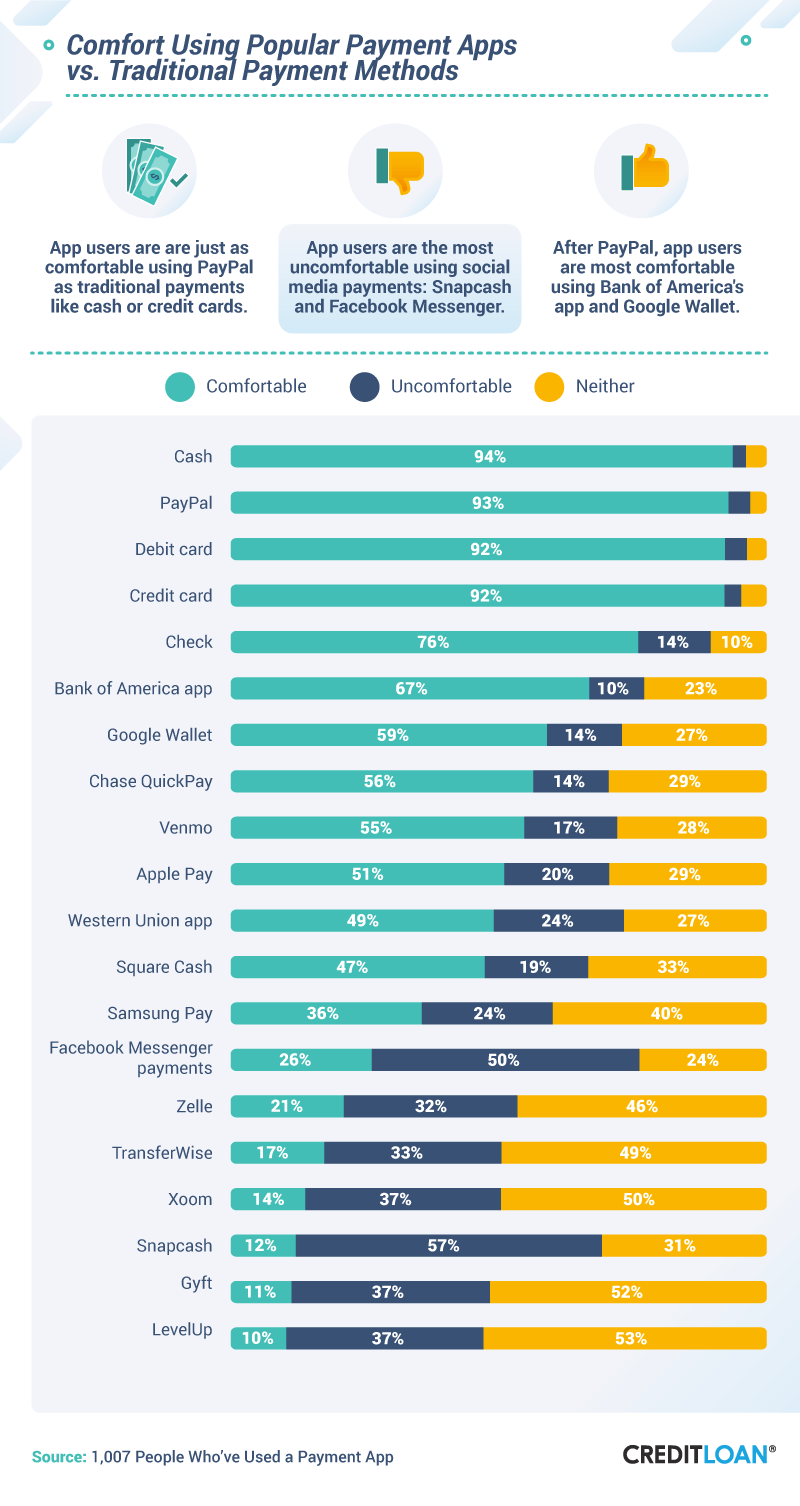 With major hacks in 2017, including the Equifax data breach exposing the private data of over 143 million consumers (including the credit card numbers of roughly 209,000 people), ransomware, it can be hard to know exactly where your financial information will be the safest.

While more people were comfortable (94 percent) using cash, 93 percent of people were comfortable using PayPal compared to debit cards (92 percent), credit cards (92 percent), and checks (76 percent). In the question of security, even experts recommend using PayPal whenever possible as opposed to entering credit card data. In addition to PayPal’s encryption technology and security intelligence, linking your credit card to PayPal instead of a checking account provides additional layers of security for both accounts.

When it comes to the built-in payment applications on smartphones, people were more comfortable using Google Wallet (59 percent) over Apple Pay (51 percent) or Samsung Pay (36 percent). Apple Pay requires users to set up two-factor authentication for added security, although Google Wallet may be more universally accessible as users only need a recipient’s email address or phone number to transfer funds to them. 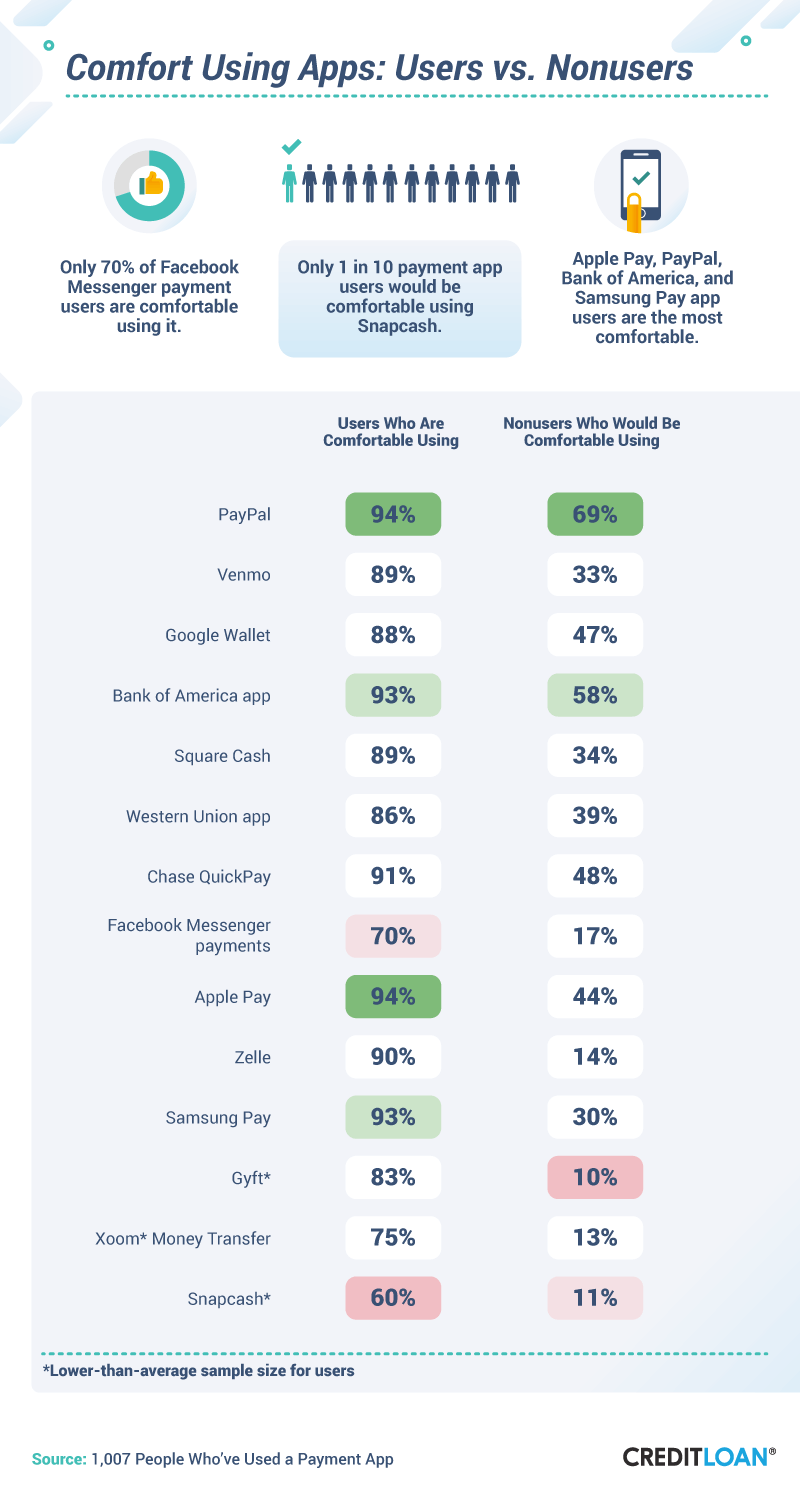 Across payment applications, users and nonusers were more comfortable with sharing money via PayPal over any other service. Tied with PayPal among current users was Apple Pay (94 percent), followed by Samsung Pay and Bank of America (93 percent each).

Apple Pay, currently accepted by more than 1 in 3 merchants across the U.S., is considered more secure than paying with a credit card by financial experts. The tokenization system (which other providers, including Google Wallet and Samsung Pay, use as well) conceals consumers' credit card data from merchants, rendering any illegally obtained information useless to potential hackers.

Safety isn’t everything when users decide to transfer money through certain payment apps, though. As one study found, a majority of Americans expressed concern that their data might have been affected after the Equifax data breach in 2017, but less than 1 in 5 took any steps to discover whether they’d been personally impacted. Despite the implications of having such sensitive data compromised, nearly 1 in 3 Americans weren’t worried by a hack at all.

Snapcash, a P2P payment system built into Snapchat, made both users and nonusers the most uncomfortable. Snapcash is operated by Square Cash, a platform people were significantly less comfortable having access to their data. Only 60 percent of active Snapcash users and 70 percent of Facebook Messenger Payment users admitted to being comfortable with these services.

Despite an assortment of payment and P2P apps designed to make transferring and sending money easier, people still preferred to use one payment method over nearly any other when it came to paying back friends and family: cash.

People paying back a friend, family member, or roommate all agreed they preferred to pay by cash rather than a money transfer or banking service application. Only men and women playing in group fantasy leagues preferred money transfer apps, followed by their debit or credit card and cash. As no small sum, the average adult who plays fantasy football in the U.S. spends roughly $556 every year to participate in these games.

Nearly half of millennials used money transfer applications when their friends or roommates were involved, while over one-third used money transfer apps to pay back a relative. Regardless of spending preferences, keeping track of money spent or received is one fundamental element of establishing a successful budget. Whether you track your spending manually or with the help of another app, seeing purchases posted to your credit or debit card is one of the easiest ways to break down where your money is coming and going. 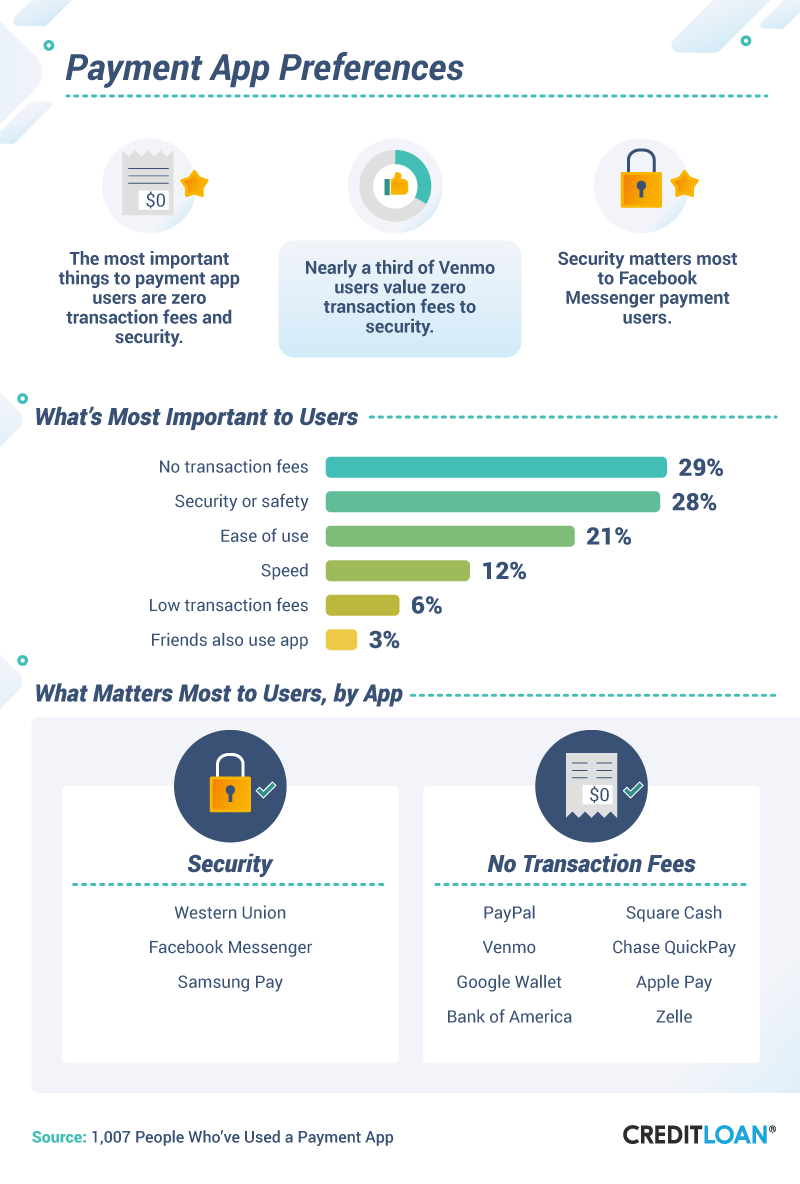 Experts recommend scouring the fine print on a credit card application for any hidden annual fees that might negate the value of rewards or cash-back programs. And debit cards aren’t much different. In 2015, Americans spent roughly $11 billion in bank fees for occurrences like overdrafting. As it turns out, avoiding transaction fees was the most important issue to payment app users too. It was rated higher than security concerns or ease of use.

Zelle, Chase QuickPay, and Google Wallet (to name a few) users identified avoiding transaction fees as their biggest concern. In contrast, Samsung Pay, Facebook Messenger, and Western Union users were more concerned by security issues. As the Facebook Messenger payment system continues to expand, financial analysts warn that potential security gaps may include a lack of strong authentication enforcement, making passwords easier to hack through Facebook than some other P2P payment services.

Whether you have a go-to mobile payment app for transferring funds or aren’t sure how to feel about these digital financial tools, online money management systems aren’t going away anytime soon. In 2016, Americans made $147 billion in digital P2P transfers, a $100 billion increase over 2015. That figure is expected to more than double by 2020.

Cash may still be king for most people, but respondents occasionally used apps they weren't entirely comfortable with for transferring money. Seventeen percent of people used Facebook Messenger to transfer funds, although 70 percent were comfortable with the service. Despite these concerns, there are smart ways to protect personal data through P2P apps, including upgrading your passwords and not using them to pay people you might not know. Perhaps as a response to its universality and ease of use, Google Wallet was more popular among respondents than Apple Pay or Samsung Pay.

Out of a potential 1,222 respondents, we surveyed 1,007 bank or money transfer app users in the U.S who were recruited from Amazon’s Mechanical Turk. Fifty-eight percent of participants identified as female, 42 percent as male, and less than 1 percent did not identify with either gender. Participants ranged in age from 18 to 74, with a mean of 36 and a standard deviation of 10.93.

The sample size was 1,007 bank or money transfer app users in the U.S. It is possible that with more participants, we could have gained more insight into this population.

If you’re comfortable sharing our findings with your readers for noncommercial purposes, link them back to this page so they can learn more.