Most Americans don’t get passionate about the finer points of economic philosophy – but odds are you’ve got an opinion about the minimum wage. After all, popular sentiment is intensely divided on the prospect of a raise for the lowest hourly earners in a battle dating all the way back to the era of Franklin Delano Roosevelt.

By now, the points of the debate are deeply familiar. Those who support an increase insist minimum wage is too meager for families to make ends meet, let alone achieve other financial ambitions like debt freedom. When adjusted for inflation, they note, the current federal minimum wage is as low as it’s been since the ՚50s.

Their opponents warn higher wages will force employers to cut their staffs, leaving low-skilled workers unemployed. Besides, minimum wage earners tend to be young people, not middle-aged adults with families to feed.

But for all these irreconcilable talking points, do Americans actually know much about the reality of minimum wage in the present? Can most identify the federal or state minimum wages as they currently stand, or are our opinions based on vague impressions? We surveyed 2,669 Americans to find out, gauging both their knowledge of the minimum wage today and what they’d like it to be.

Keep reading to see each state’s grasp of the facts and hopes for the future in the minimum wage debate.

Way Off on Minimum Wage 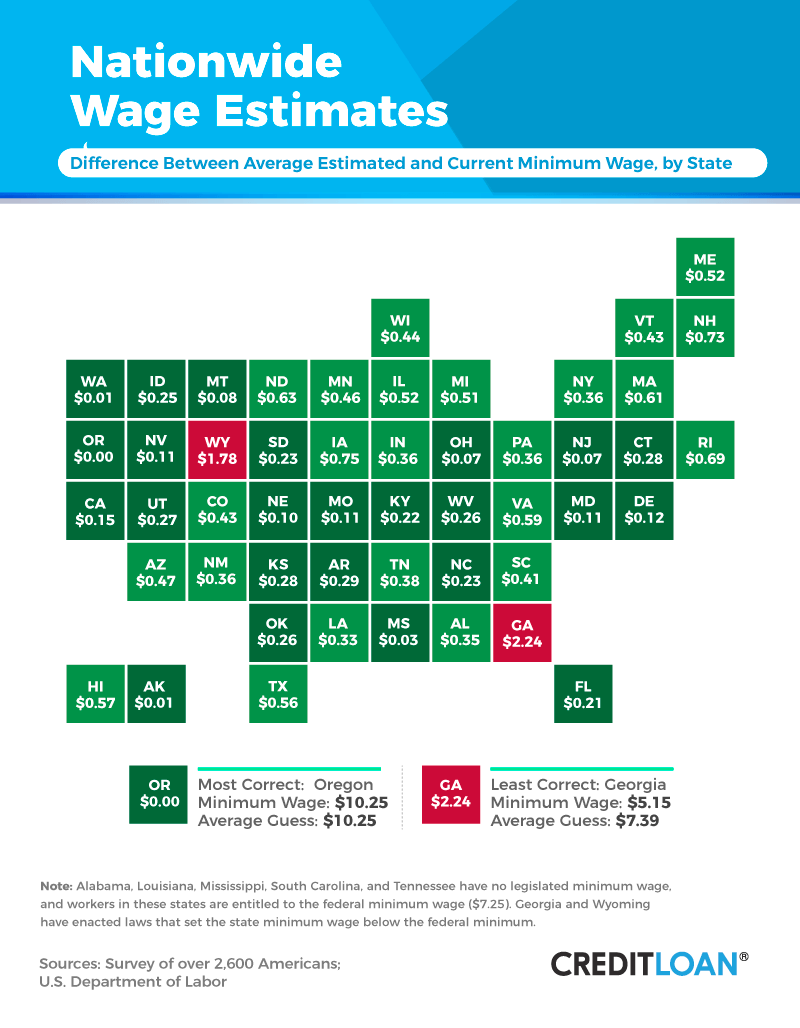 Time to face the music, America: Most of us are pretty poorly informed about minimum wage standards nationally. In fact, according to our survey results, just 35.5 percent of respondents correctly identified the federal minimum wage at $7.25 an hour.

Of course, we’re better about knowing the minimum wage in our own states, right? Well, sort of. 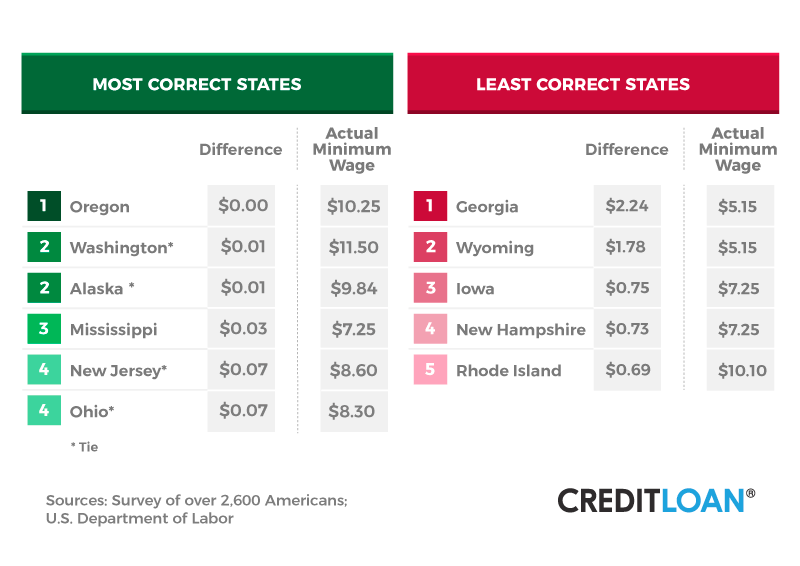 Our hat`s are off to residents of Oregon, whose average guesses were right on the money about their state’s standard wage. Perhaps awareness in the Beaver State stems from local coverage of their approach: a three-tiered minimum wage for different areas in the state, and small annual increases through 2022. In neighboring Washington, where a similar policy was adopted to much fanfare in 2016, and far to the north in Alaska, the average of all guesses was just one cent off.

Mississippi residents also came within three cents of their state’s true minimum wage on average, although that accuracy may have more to do with residents’ personal experience than any policy discussion. According to BLS figures, Mississippi has one of the highest rates of workers making minimum wage nationwide.

Perhaps we should give Georgians and Wyomans a pass for their last place finish as well: Their minimum wage of $5.15 is technically below the federal standard where workers are typically entitled to take home $7.25 an hour.

One might assume those who earn minimum wage would be the most likely to be informed about national standards. But when we segmented our responses by income, things didn’t exactly pan out that way. 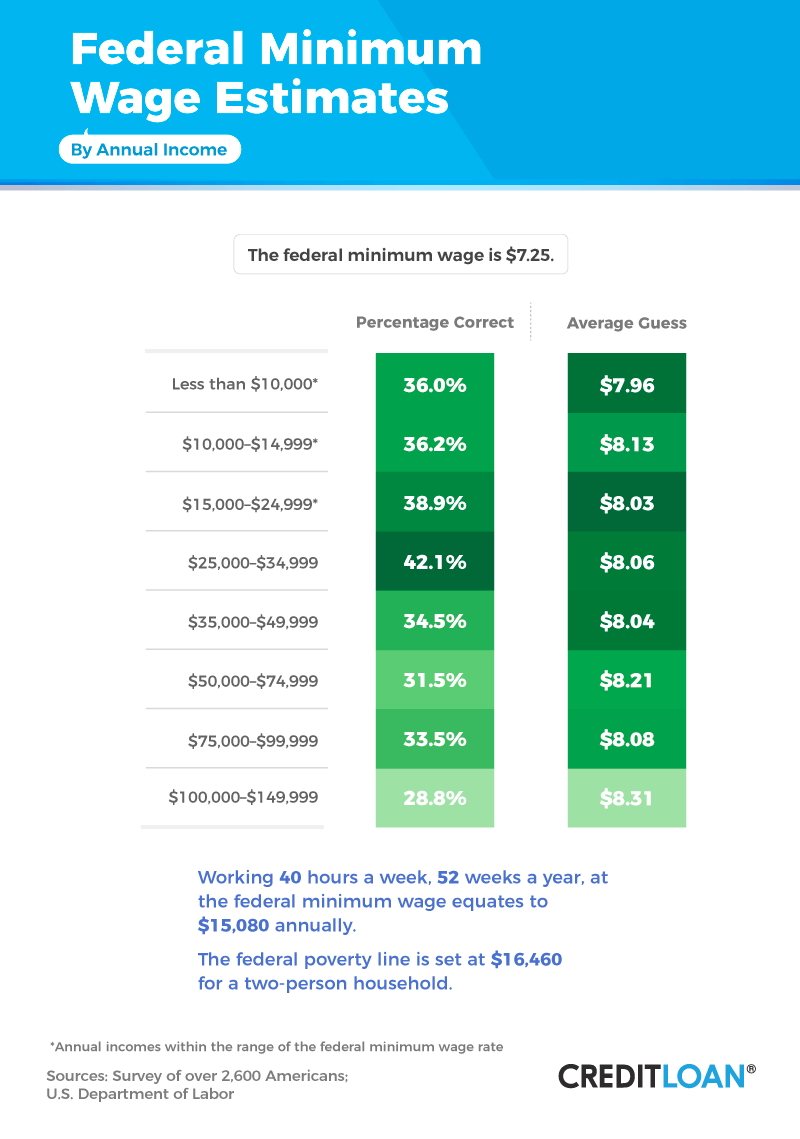 On average, every single bracket of earners overestimated what minimum wage actually was. In fact, the estimates of every group were at least 71 cents higher than the true figure.

If ignorance was prevalent among all earners, however, it was most concentrated at the top. Those who earned the least guessed closest to the real number, while those who earned most overshot by more than a dollar.

It would be easy to dismiss our participants’ inaccurately low estimates as the product of wishful thinking. But when we asked them what a fair minimum wage would be for their own states, they aimed even higher. In fact, residents in every single state said minimum wage should be higher than where it stands currently.

Wishing for a Higher Wage

In some states, the discrepancy between residents’ desires and reality was quite substantial. In Wyoming, where the minimum wage is on the books at $5.15, residents’ average ideal wage was over two times the current wage at $10.88.

In New Hampshire, residents wanted an increase that would bring the state minimum wage over $12 an hour, a sizeable jump akin to one proposed in the New Hampshire Senate in January 2018.

Conversely, the ideal minimum wage among Montanans was just 55 cents higher than the state’s current standard, and the difference was also small in neighboring South Dakota. Both these states have strikingly low rates of debt per resident – perhaps a jump in hourly earnings feels less urgent without the threat of going into collections.

Interestingly, the average ideal minimum wage among Arizonans was $11.52 per hour, just a little over a dollar above its current rate. According to the state’s plans for incremental increases, the minimum wage is actually set to exceed that ideal by 2020, when it reaches $12 an hour. Some state legislators have called for future increases to be scuttled, fearing layoffs by local employers as a result.

Making a Living on Minimum Wage

If so many of our respondents approve of a higher minimum wage in their states, what’s prompting such universal support for an increase? One possible concern is that the minimum wage is currently insufficient to support a family, leaving millions of workers and their children in financial peril.

But if that’s the case, how do our respondents’ ideals correspond to what a family really needs to survive in each state ? We compared their responses to MIT’s Living Wage metrics to find out.

In some places, even the ideal residents proposed was still too little to live on. Virginians, for instance, had an average ideal minimum wage $2.39 lower than the living wage in that state – due partially to a relatively expensive local real estate market. Residents of Hawaii, where virtually everything costs more than on the continent, also set a minimum wage ideal below the living wage required in their state.

Even places with relatively modest costs of living could underestimate their minimum wage ideals as well, however. This was true in some parts of the South (Mississippi and Oklahoma) as well as the West (Montana and Idaho).

Some states, however, actually wished for more than the average worker might need to live decently. Washington’s ideal was about $2.58 greater than the living wage rate. At $14.86, the ideal was closer to Seattle’s new minimum wage of $15 than what a worker would actually need to make ends meet.

Differences of Opinion, by Demographic

With these geographical comparisons in mind, we also considered how income, age, and political affiliation might shape our minimum wage ideals. Also, we calculated some national averages to reveal broad consensus where possible. 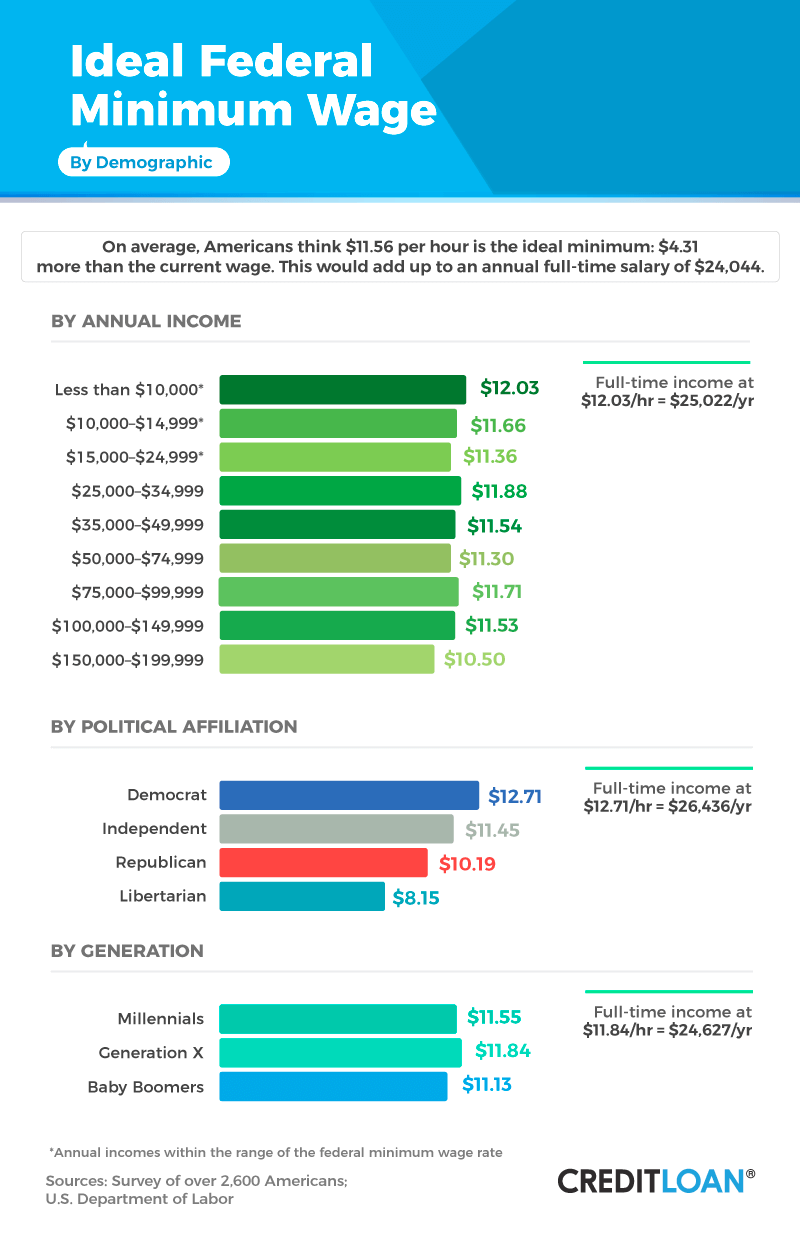 Leaving aside state differences, our participants were overwhelming in their support for an elevated federal minimum wage. On average, they proposed $11.56 per hour: $4.31 more than where it stands currently.

That average encompasses some variation in opinion, however, including between economic groups. Workers who earned the least had the highest ideal minimum wage: $12.03, or about $4.78 higher than the minimum today. Conversely, those who earned the most suggested the lowest ideal: just $10.50.

While there was a consensus among political affiliations that a federal minimum wage increase was warranted, they differed regarding the scale of the proposed raise. Democrats, whose party platform endorsed a $15 minimum wage in 2016, suggested a $12.71 minimum on average. Republicans and Libertarians were more cautious: Conservatives typically warn that forced wage surges will have unintended consequences elsewhere in the economy.

Interestingly, millennials advocated a lesser increase than Gen Xers, although both outpaced baby boomers regarding the ideal increase. That’s especially surprising in light of recent data suggesting millennials earn less proportionally than the generation prior – a predicament that might inspire calls for higher wages across the board.

Although our findings indicate broad support for a minimum wage increase of some kind, we also see vast differences in opinion about what that pay bump should look like, both nationally and in each state.

If Americans are to reach a compromise on this issue, they must begin by becoming more informed about the implications of their opinions for working families. We hope this project helps those with opposing views meet by fact. In comparing their ideals, they may discover more in common than they imagine.

At a more personal level, however, you can’t wait for a change in the law to improve your financial outlook. At CreditLoan, we’re here to support every aspect of your financial journey – from providing the recommendations on the best in credit cards and personal loans to credit monitoring and debt consolidation. Whether you’re trying to build a better budget for your family or are thinking ahead toward retirement, CreditLoan is here for you.

We collected survey responses from 2,669 Americans from all 50 states using Amazon’s Mechanical Turk, as well as Reddit postings in city and state subreddits. We also sought survey respondents using Facebook advertisements for states with inadequate numbers of Mturk and Reddit responses (Delaware, Mississippi, North Dakota, South Dakota, Hawaii, Wyoming, and Montana). We asked individuals to only answer questions relating to their current state of residence. We did our best to collect similar amounts of residents from each state, although some states had more representation than others. All states had at least 34 respondents.

Results from Washington, D.C., were excluded from analysis because there were too few participants. Counts of responses from each state listed in the table below:

50.3% of participants were female, and 48.7% were male. Less than 1 percent were nonbinary. Participants ranged in age from 18 to 82, with a mean of 35.3 and a standard deviation of 11.0. Participants younger than 18, as well as those with incomplete or inconsistent responses, were excluded from analysis. We weighted the data to the 2016 U.S. census for sex, age, and state population.

Our primary method for collecting survey responses was Amazon’s Mechanical Turk service. As a result, participants’ attitudes about the minimum wage as well as their current annual earnings are likely skewed. This survey may slightly overrepresent the attitudes of those currently earning the minimum wage. 10.2% of survey participants who were currently paid an hourly rate reported earning their state’s minimum wage. By comparison, only 2.7% of U.S. workers in 2016 who were paid an hourly rate earned the minimum wage. It is also possible that with more participants from the states with fewer than 50 respondents, we could have gained more insight into their populations.

No statistical testing was performed, so the claims listed above are based on means alone. As such, this content is purely exploratory, and future research should approach this topic in more rigorously.

You’re welcome to share our work with your own audience, so feel free to use our information and images for any noncommercial purpose. We simply ask that you attribute us fairly by providing a link back to this page. We all deserve a little credit for our work – at a minimum.