Discovering the Traits That Lead to Side Hustle Success

Whether they're trying to overcome living paycheck to paycheck, want to pay off student debt faster, or are putting aside extra cash, more Americans today are working multiple jobs than at any point in the last 20 years.

But working too many hours each week may not always have a positive payoff, so knowing which side hustles pay the best and fit your personality could create the perfect flow of added income.

In fact, your Myers-Briggs Type Indicator® (MBTI®) could have something to do with the side jobs you're likely to take on and enjoy. Understanding the differences between the way you see and interpret the world could provide better insight into the work you find most meaningful.

To learn more, we surveyed 996 Americans working at least one side job in addition to a primary occupation. We wanted to find out:

Considering taking on a side gig but curious which jobs to consider?Read on to see what we learned.

In 2017, the number of employed Americans working more than one job reached a 20-year high at 7.6 million. While that number may seem troubling to the many people struggling to make ends meet, our survey found financial need was not the primary motivation for picking up work on the side.

Nearly 66 percent of Americans surveyed said they worked beyond their primary employment to have more spending money.

Americans spend thousands of dollars each year on entertainment purchases, including audio and visual equipment (like TVs), pets, toys, and other hobbies. And, in 2017, they spent an estimated $101 billion on vacations, nearly a 13 percent increase over 2016. Whether their passions are tech devices, experiences, or both, these nonessential acquisitions cost money, and side jobs can help fund them.

More than half of people polled also put in extra hours at their side gigs to increase their savings. While 34 percent of Americans have nothing put away in savings, and nearly as many have only a few hundred dollars tucked away, establishing healthy saving habits can be the difference between managing an unexpected expense with ease or having it turn into a full-fledged financial crisis.

Regardless of the gig, side hustles take time, and people identified the activities they sacrificed to make room for the extra work. Nearly half of Americans working a side job confessed to giving up recreational time to do it. Time with friends or family (almost 42 percent), sleep (about 39 percent), and household chores (32 percent) were also common sacrifices among these devoted hustlers.

For some people, turning a side job into a main gig can be a point of passion. While almost 18 percent of people said they made no sacrifices to accommodate their side gigs, more than 1 in 5 worked on their side hustles while on the clock at their main job.

Not all side jobs pay equally. To find which side hustles were the most lucrative, we asked respondents about their monthly earnings and found the median as well as the maximum potential for each job.

When it came to earning additional income, the most lucrative supplementary job was clear – selling and renting property. There are multiple benefits to investing in property: the potential for a very valuable asset to appreciate over time, the bonus of pocketing rental money every month, and the tax write-offs to take advantage of each year.

Buying a home may not be nearly as complicated as you think, and earnings added up to a median monthly income of $500 and an hourly rate of $81, according to Americans surveyed. Even more exciting? If you're willing to put in the work to hone your craft, the maximum monthly income from selling and renting property for some Americans was $7,000.

Other profitable secondary hustles included ride-sharing (which earned a median monthly income of $350 and a maximum of $3,000), e-commerce or drop shipping (up to $6,000 a month), and freelance work or consulting ($200 a month each).

And if you're looking for jobs with the greatest median per-hour potential, consider computer repair (and fitness training or freelance work), which earned a median $20 per hour.

Finding Work That Suits You

When it comes to earning extra cash without stretching yourself too far or feeling overwhelmed, a person's unique personality indicators could contain the secret behind how they find success in their side gigs.

There are eight core personality traits identified by the MBTI. Combined, they help provide context and meaning to the seemingly random variation in our personalities. Here is a quick breakdown of the eight personality traits and their characteristics.These terms and definitions have been taken from the MBTI website: 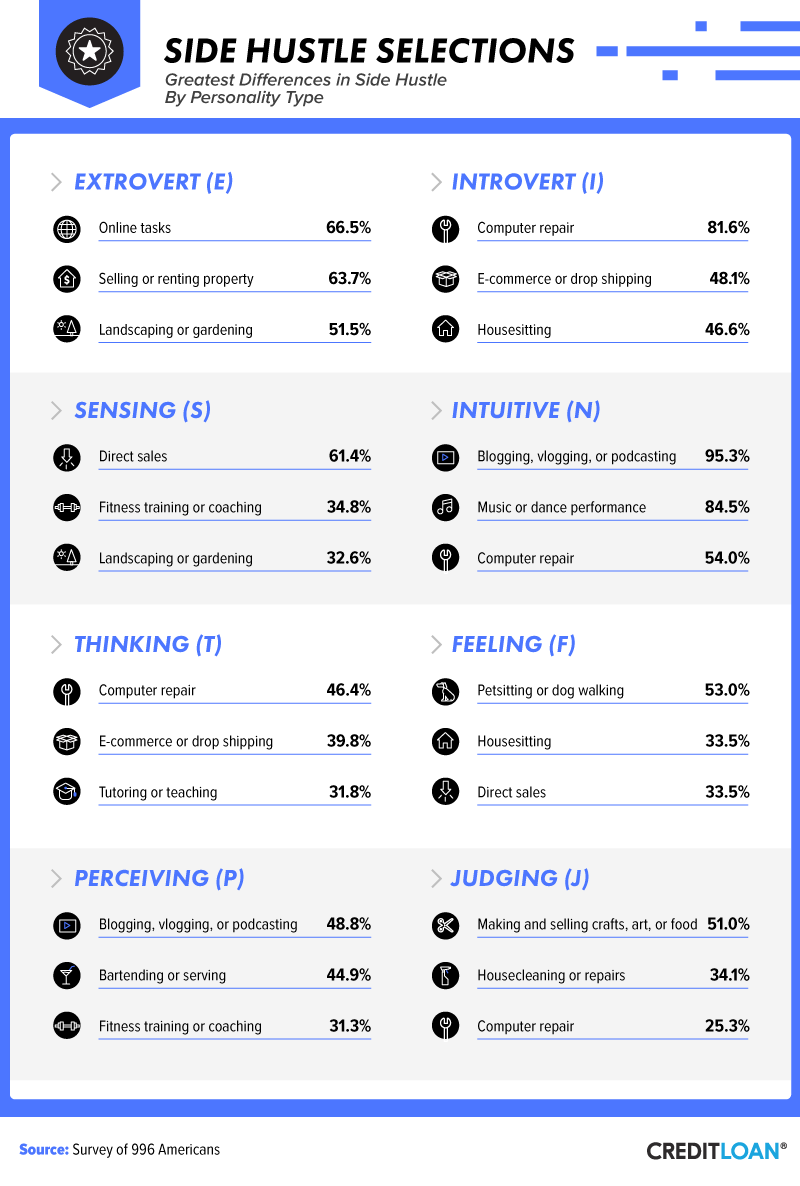 Extroverts tend to be outgoing and comfortable in large groups, but they were over 66 percent more likely than introverts to make extra money from online tasks. Have a few minutes to spare to work on data entry, email harvesting, or other outsourced tasks? There's a large market for this if you have a flexible schedule and a lot of patience with repetitive assignments.

In contrast, introverts were more likely than extroverts to take on computer repair (nearly 82 percent), e-commerce or drop shipping (just over 48 percent), and housesitting (almost 47 percent). Introverts are seen as reflective and reserved, and housesitting could provide a comfortable environment with minimal overhead and a lot of valuable alone time.

Intuitive types, who tend to interpret and add meaning to information rather than process it at face value, were more likely to choose blogging, vlogging, or podcasting. If you're up for sharing your story or passion with the masses on the internet, you can earn a fair bit of pocket change just doing what you love online. Be warned, though, marketing and promoting yourself are a must to increase traffic to your channel or website.

Sensing personalities were more likely than intuitive types to choose direct sales and fitness training or coaching to bring in extra cash, which are great "hands-on" jobs they tend to crave.

When compared to thinking types, feeling types were more likely to choose petsitting and dog walking as a side job. If you're already a big fan of animals, petsitting for someone out of town could be the perfect hustle. Just make sure to treat your time with the furry friends like the business it is, by finding clients who will pay you for your time rather than offering your services for free or at a reduced cost.

On the other end of the spectrum, thinkers were over 46 percent more likely to identify computer repair as one of their side jobs. With the flexibility to work on computers when it's convenient, tinkering with technology (or online and remotely for software repairs) could be lucrative if you're willing to put in the legwork needed to serve customers.

Adding Up Side Hustles 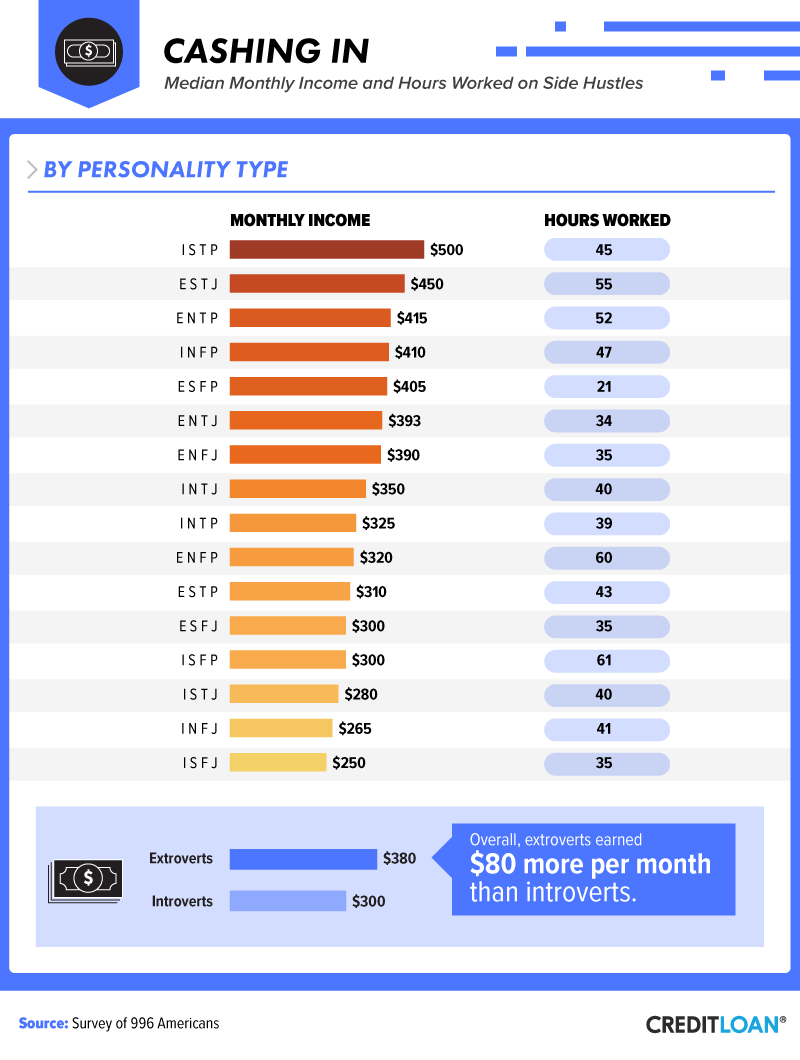 Some psychologists suggest 40 to 50 hours of work each week is more than enough for most people. Beyond that, you could start to feel your productivity stalling, lose out on sleep, or experience symptoms of depression. According to our investigation, finding the critical balance between income and hours worked might come more naturally for certain personalities.

Our survey revealed people with an ISTP personality type (introvert, sensing, thinking, and perceiving) earned the most, with a median income of $500 after only 45 hours of work each month. Following ISTPs, ESTJs ($450), ENTPs ($415), and INFPs ($410) earned the most, although the extroverted types put a median of 52 to 55 hours into their side gig each month.

A few personality types put in more hours than any other group but still earned among the lowest monthly incomes. People who identified as both ENFP ($320) and ISFP ($300) contributed roughly 60 hours a month to their crafts but earned less monthly cash than other people putting in half or only a third of the time. 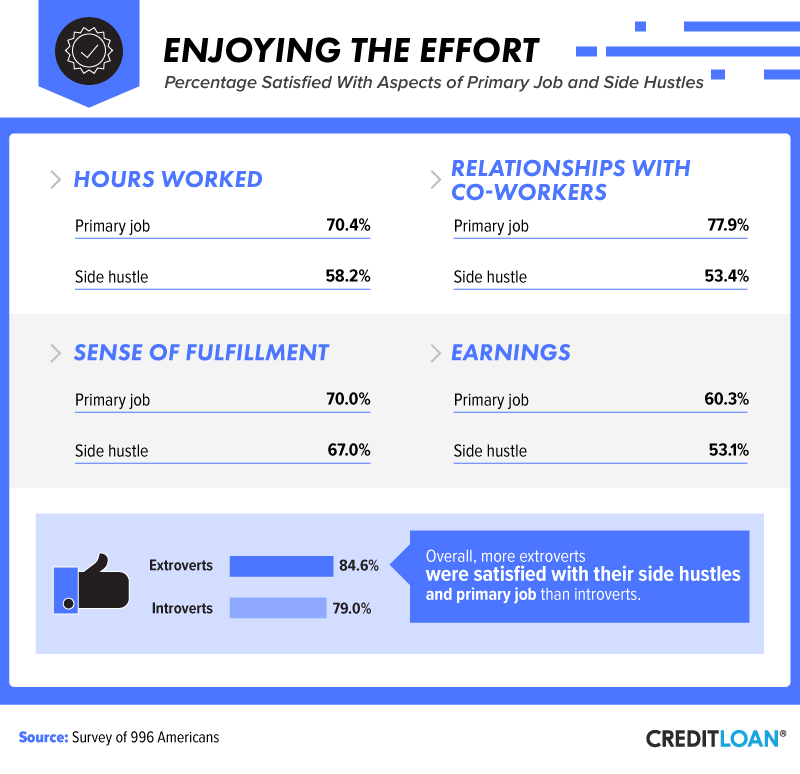 Despite the extra hours they put in regularly, or the impact overworking can have both physically and mentally, we asked Americans working at least one side job how satisfied they were with their routine.

Those surveyed were more likely to be satisfied with their primary employment over their side jobs when it came to the hours they worked, their co-workers, their sense of fulfillment, and overall earnings.

But side hustles offered some gratification, too. The most satisfying element of working a second job for most people was clear: the sense of fulfillment people earned from their work. The hours worked (over 58 percent) and the relationships they created with co-workers (around 53 percent) were also popular sources of satisfaction for Americans putting in extra hours on the side.

As long as you properly balance your time, working a side hustle can have benefits that go beyond the extra cash pulled in. You might also pick up a few extra creative skills along the way. But even though Americans polled were more unsatisfied with their salaries than any other part of their primary jobs, they still appreciated their main gigs more than their side hustles.

Considering the things people were willing to give up (like time with family and friends or even sleep) to clock in extra work hours, enjoying what you do on the side could be one secret to success. As we found, whether you're just trying to earn extra cash or want to build savings, your Myers-Briggs personality type could have something to say about the work you enjoy and the money you make doing it.

At CreditLoan, we're here to support every aspect of your financial journey – from providing recommendations on the best in credit cards and personal loans to credit monitoring and debt consolidation. Whether you're trying to save for your next vacation, pay down debt, or just thinking ahead toward retirement, our educational tools and expert analysis are here to help.

We collected responses from 996 Americans using Amazon's Mechanical Turk. 68.3 percent of participants were introverts, and 31.4 percent were extroverts. Participants ranged in age from 18 to 74, with a mean of 36.1 and a standard deviation of 11.3.

The sample size for each Myers-Briggs Type Indicator® (MBTI®) are as follows:

It is possible with more participants among these personality types, we could have gained more insight into these populations.

We omitted motivations, sacrifices, side hustles, and industries of primary occupations from the comparisons that had fewer than 25 respondents or fell into a miscellaneous or "other" category.

The results of this survey were collected using Amazon's Mechanical Turk service, so survey taking was the most common side hustle among all respondents regardless of personality type. We removed "survey taking" from the presentation of our findings in visualizations that showed the frequency of different side hustles. Additionally, since this survey was conducted using Mechanical Turk, our survey results may vary slightly from what they might have been had we collected them using a different participant collection technique.

Do you know someone working a side hustle or trying to break into a secondary job? Feel free to share the graphics or results of our study for any noncommercial use. We only ask that you ensure a link back to this page to provide proper credit to our contributors.