The statement that a lot of Americans are in debt shouldn't be a shocker to anyone. It also probably won’t surprise you that socio-economic classes have a major effect on the amount of debt likely to be carried from month to month.

But is there a factor that levels the playing field?

Debt, in terms of medical care, is universally unkind with medical bills being the number one cause of bankruptcy cases.

Cancer, heart failure, and other debilitating diseases do not generally discriminate between the different wage brackets and the bills can be hefty enough to derail even the stoutest bank accounts.

Many self-pay medical customers scramble to find ways to lower their medical costs; some skip doctor’s appointments or delay them as long as possible.

Others avoid filling prescriptions for medications.

In the end, these kinds of choices usually wind up costing the individual more in terms of health deterioration as well as additional medical care fees for the declining health.

Where do these additional costs usually wind up going?

You guessed it: on a credit card account, which is then carried as a balance from month to month.

The number one medical expense charged to a credit account is medication.

Other costs wind up on the Visa bill as well: click the graphic at left to see how self-pay medical bills stack up.

Learning how to leverage debt and income for the greatest benefit could help anyone no matter who you are or how fat or thin your savings account might be.

Did you know that, on average, the poorest or lowest income families carry the most credit card debt?

Perhaps this seems obvious, but that wasn’t always the case.

A few decades ago, the poorest of the poor simply did without, meaning they were poor, but out of debt as a rule.

Now, the lowest classes have caught the middle-class disease of keeping up with the Jones’ by charging their expenses.

This leads to the downward debt cycle of overspending, underpaying, and eventually bankruptcy.

Bankruptcy averages are at 19% for wage earners under $30k annually. This is not the highest bankruptcy wage bracket, but only by 1%.

To see the highest and lowest bankruptcy salaries, click the graphic to the left.

How does debt stack up in the ethnic groups?

But this statistic is misleading because as of 2007, over 90% of African American families were carrying a balance in credit card debt from month to month.

The numbers look better taking the entire African American populace as a whole.

Where is America's Debt?

We've discussed Americans' debts, but what about debt in America? 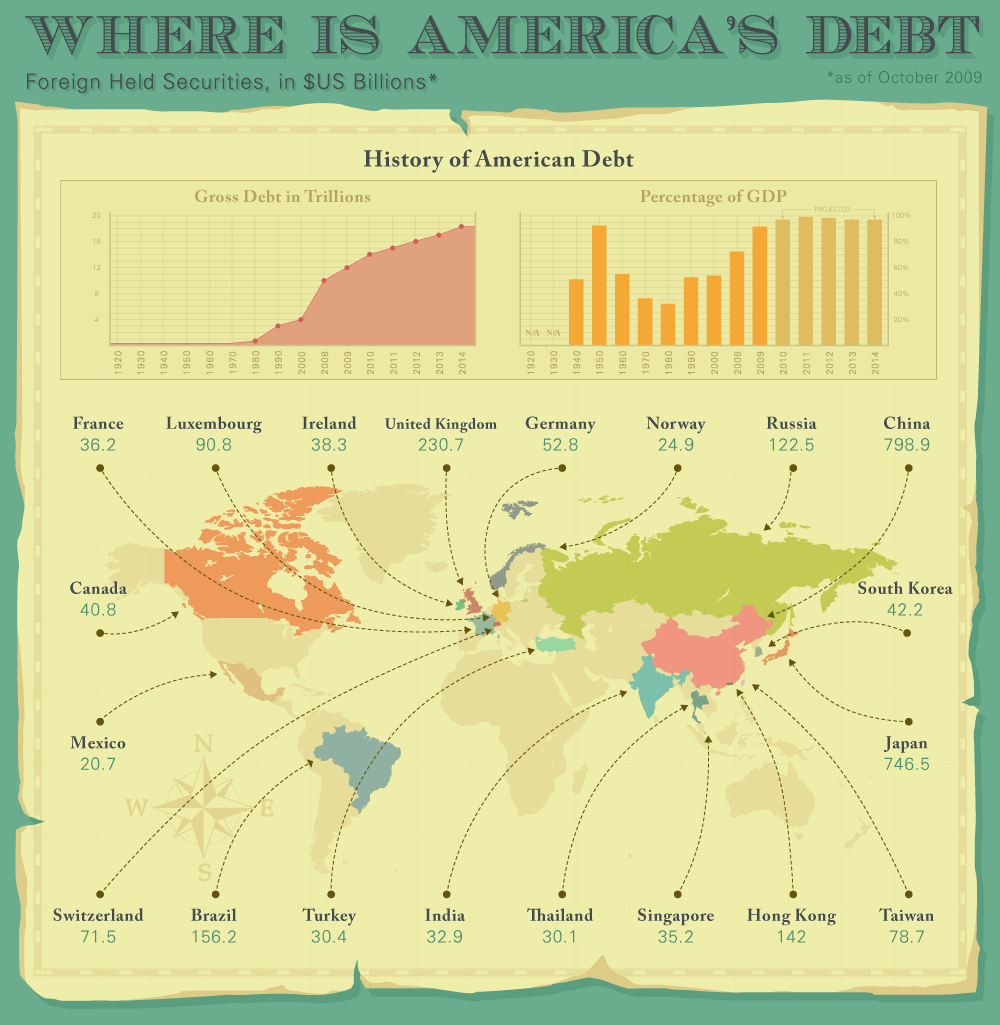 America's collective debt, also called the national debt or the public debt, represents the money that the U.S. government owes to the owners of debt instruments that are issued by the U.S. treasury.

There are several types of debt instruments issued by the U.S. Department of the Treasury.

All of these items are collectively called treasuries.

America has always had debt.

Since the 18th century, the country has carried a load of debt that has fluctuated with the political and social climate of the day.

The Civil War brought about a major spike in the debt.

World War I and World War II also brought about major rises in the debt.

The latest American debt numbers have put it at its steepest numbers since the debt level spiked during World War II.

America's debt, as owed to foreign nations, has been rising steadily over the years.

After falling for a few decades, it began rising again in the late 1980s.

It is projected to continue to rise over the next few years.

The projected amount of American debt in the next few years equals 100 percent of the U.S. GDP.