Ask any pundit: In broad economic terms, times are good in America. As unemployment remains encouragingly low, a specter of disruption lurks on the horizon: automation.

While most of us are vaguely aware of the automation threat, relatively few Americans believe machines will take their own jobs. In one recent survey, just 1 in 5 Americans expected their jobs would become obsolete in the next 50 years.

Unfortunately, Oxford researchers suggest a far greater portion of the public should be concerned. In fact, in an extensive recent study, they found as much as 47 percent of all U.S. employment is at high risk of automation in the future. If this change came to pass, which regions and demographics would be most affected?

In this project, we set out to see exactly how automation could alter the American workforce if it does occur. Pairing the Oxford researchers’ findings with government economic data, we’ve determined which workers might be displaced by machines and which communities could suffer most.

Our findings describe the impending reality of an automated America, and the most endangered jobs nationwide. Read on learn how your own community will fare as technology irrevocably alters the American economy. 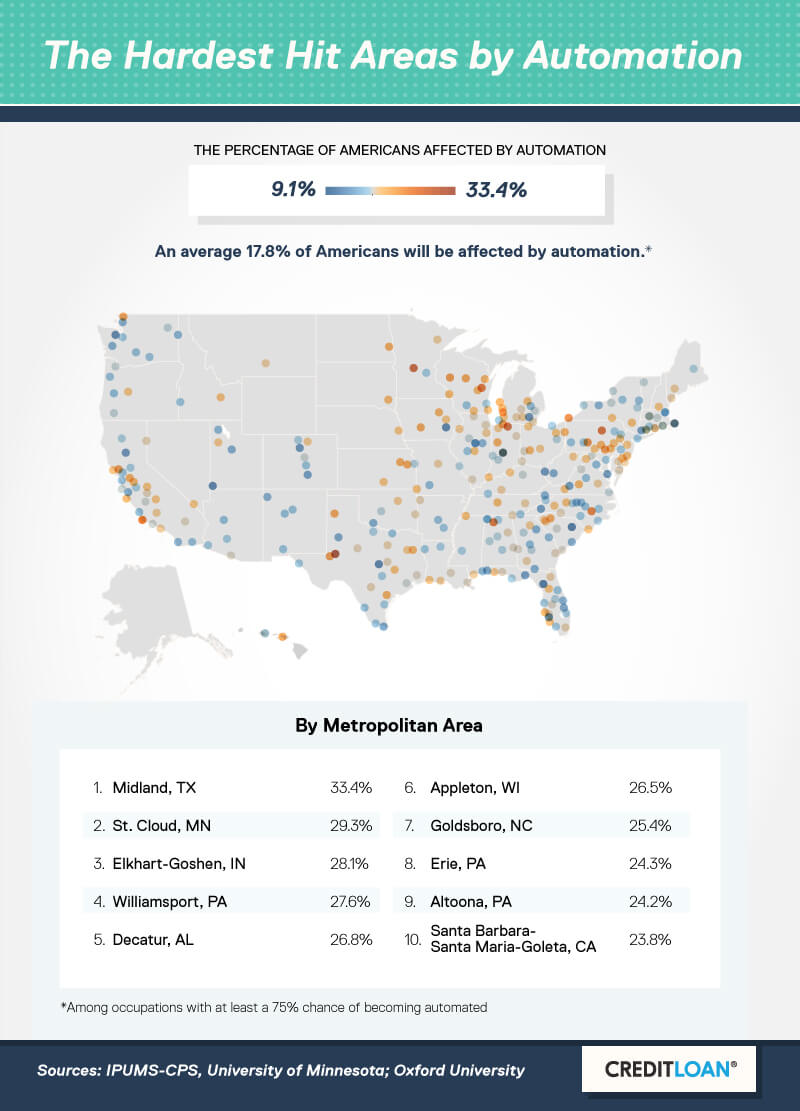 Around the nation, few areas seem entirely immune to the potential impacts of automation on employment. In fact, our data suggest an average of 17.8 percent of Americans will be affected by technological threats to their livelihood in the years to come.

Certain pockets of the nation possessed a better outlook than most, including much of the Northeast. Metropolitan areas ranging from New York to Maine had low or middling percentages of their populations susceptible to automation replacement. The majority of the Pacific Northwest was similarly blessed, with only isolated exceptions in Washington and Oregon.

Portions of the country’s geography with potentially bleaker outlooks included former hotbeds of manufacturing, an industry that saw 674 mass layoffs in the previous decade alone.

Many such states can ill afford any additional employment exoduses. Pennsylvania, for instance, has lost 300,000 manufacturing jobs since 2001, yet our findings show many more of the Keystone State’s workers may suffer from automation.

Wisconsin has been similarly ravaged by the contraction of its manufacturing industry, losing nearly 46,000 jobs in that sector since 2006. Our findings suggest such losses could continue or intensify with ongoing automation: In several areas in the state, a significant percentage of the workforce is at risk.

Men and Women vs. Machines 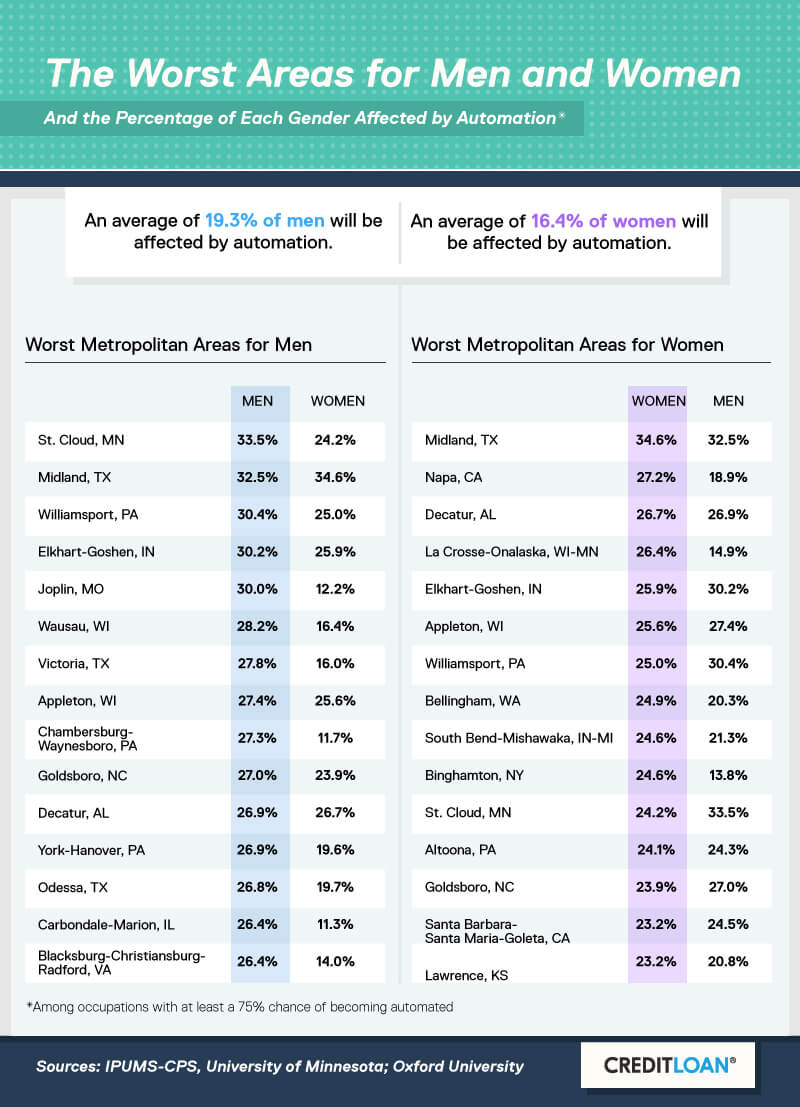 To better understand which Americans are most imperiled by automation, we studied the places in which male and female workers could be most vulnerable. Nationally, a slightly larger percentage of male workers faced significant automation threats, but both genders contend with massive uncertainty in many areas.

In St. Cloud, Minnesota, for example, over 1 in 3 men had a high probability of being affected by automation, as did nearly a quarter of women. As a quintessential oil town, roughly a third of both male and female workers faced large automation risks in Midland, Texas.

For residents of towns where automation threatens men and women alike, these figures reflect a cruel irony: Some places have actually experienced a small resurgence in specific industries as of late.

In Elkhart-Goshen, Indiana, for example, a revitalized auto industry added 4,900 new manufacturing jobs in 2017. In Williamsport, Pennsylvania, hiring by the natural gas industry has been cause for optimism. Will this job growth be cut painfully short by the arrival of automation?

In other places, one gender was particularly vulnerable. In Joplin, Missouri, 30 percent of men faced a high risk of job mechanization, but this was true for just 12.2 percent of women. A similar disparity emerged in Chambersburg-Waynesboro, Pennsylvania, which has already seen many manufacturing plants shuttered.

In Napa, California, over 27 percent of women in the workforce faced a high risk of replacement, relative to less than 19 percent of working men. That’s an interesting statistic for an area synonymous with winemaking – an industry roundly criticized for its exclusion of women from leadership. Perhaps Napa’s female workers are more susceptible to automation than men for precisely this reason: They’re barred from positions of power.

Automation by Sex and Sector

Many positions are occupied largely by one gender: Just over 98 percent of auto mechanics are male, for instance, while 94 percent of nurses are female. Our data indicate female-dominated roles had a 52.5 percent probability of automation on average, relative to a 58.1 percent probability for male-dominated professions. Jobs held mostly by men had higher salaries on average, however, attesting to the lingering pay gap between men and women.

Among professions composed primarily of women, clerical roles were some of the most vulnerable to technical advances. These included bookkeepers, file clerks, and data entry specialists, positions that pay less than $40,000, on average, annually. If competition from automation further depresses these wages, more women could find themselves struggling to make ends meet every month.

Many of the male-dominated jobs with the highest probability of automation also paid modest salaries, although they tended to be more labor-intensive. This cohort included machine operators of various kinds, as well as physically demanding roles such as cargo and freight handlers.

Among professions dominated by either men or women, however, the roles most immune to automation required extensive education or specialized training. While advanced degrees aren’t the only path to big earnings, they may be the best guard against becoming obsolete.

For instance, audiology was the majority-female field least likely to succumb to mechanized replacement, and a doctorate is required for licensure in that profession. Similarly, various engineering professions were the least likely to face automation threats among male-dominated roles.

When we consider the wide-ranging change automation promises for the American industry, it’s easy to despair about innovation displacing millions of workers. While our data justify this fear, our findings also warrant a more productive approach: adaptation.

Whether at the level of national policy or individual ingenuity, we must embrace the reality of technological change in the way Americans work. That means preparing ourselves for new roles with training and education or positioning our careers to align with future opportunities however possible.

Of course, this kind of preparation requires investment. If you need capital to transform your life or business to weather the impacts of automation, we’re here to help. From savvy tips on growing your savings to competitive loan rates from reputable lenders, we’ll help you navigate uncertain times with confidence — even if you're looking for a bad credit loan.

After all, that’s one of the perks of being human: We can rely on each other to build our futures together.

We collected data concerning automation probability in each industry from "The Future of Employment: How Susceptible Are Jobs to Computerisation?", a paper prepared by Oxford University researchers. The authors of this study discuss the possible uncertainties in their predictions at length, and interested readers can find those details in a section of the paper titled “Limitations.” We then utilized employment and education information from the Integrated Public Use Microdata Series (IPUMS) maintained by the University of Minnesota to extrapolate how the probability of automation might affect specific regions, industries, and demographics across America.

This project did not entail statistical testing, so the conclusions presented above are based on simple averages. Although our work explores the subject of automation in many interesting respects, further research is warranted to investigate this topic in greater detail, including the application of more rigorous statistical methods.

Want to share our findings with your own audience? You’re free to do so for noncommercial purposes. If you do, please provide a link to this page to attribute us appropriately. After all, we’re not machines – we appreciate credit for our work.