A lot of economists are wondering what lessons, if any, consumers have learned from the Great Recession and its painfully slow recovery. Has an unemployment rate that was above 9 percent for almost three years and is currently a high 7.6% taught consumers the value of spending less? Has the soaring number of housing foreclosures showed consumers that they don’t always have to purchase the biggest and most expensive items on the market?

And have falling home values taught consumers how important it is to have real savings and real dollars in their checking and savings accounts?

There’s a real debate regarding this. Some economists claim that consumers are paying off their credit card debt – and the numbers would seem to support this. After all, the country’s total consumer credit card debt has been falling steadily since the worst days of the Great Recession. Consumer spending is down as well.

Other economists argue that the drop in credit card debt is more likely the result of banks and other financial institutions writing off debt that they can’t collect. According to them, it’s not that consumers are paying off more debt, it’s that the banks and credit card companies are giving up tracking down much of this debt.

If the second group of economists is right, would it be a surprise? Would you be shocked to find out that the average U.S. consumer still knows little about willpower, self-control and money management? A quick look at the example that the Federal Government provides shows the answer. The federal government has a projected deficit of $642 billion, meaning that, generally speaking, hundreds of billions more is being spent than being collected. And state governments? They’re not much better. In fact, a growing number of states are facing their own rather severe budget shortfalls.

State governments are no better. Many states are following the Federal example by spending more than they are taking in. The results of this budgeting technique? One day the states find out that they’re burdened with huge amounts of debt.

Is Debt The American Way?

This sentiment may sound cynical, but the United States was been built on overspending. The Federal Government encourages consumers to spend by using credit, whether for small consumer goods or large investments such as houses and cars. This spending, in turn, is supposed to help lead us out of the economic doldrums. Retailers bombard consumers with ads for the biggest flat-screen TVs, the most powerful computers and the fastest sports cars with the full encouragement of the government.

With these examples, it’s little wonder that most U.S. consumers have an “I want it now” mentality. They don’t want to save up money to buy that cool smartphone or that antique bedroom set. They want it now. If possessing these items requires putting thousands of dollars on their credit cards, that’s what Americans will do. And that’s what the federal government, and most state governments, do, too.

A news story in Forbes Magazine reported that at least 39 states expect to face a significant budget shortfall in 2011. In other words, more than half of the country’s state governments are broke.

According to reports, this total budget shortfall equals more than $180 billion in debt.

Certain states are in worse shape than others. Illinois was reported as having the worst finances of all 50 states. That’s not good news for the residents of the Land of Lincoln.

But Illinois is far from alone in facing serious budget issues. Read the infographic attached to this story and you’ll see just how serious the financial woes are in many states. And next time you’re at the electronics store, show some restraint. Resist the urge to buy that new iPod. Save up the money instead, and then pay for it in cash. Who knows? If enough of us do this, we might give our state and federal governments something to think about. 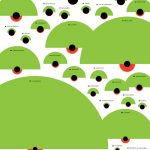 Breakdown of how each region's external debt around the world has evolved through the decades, starting back in 1970, all the way until today.

A Global History of Debt: National Debts Rise and Fall in the Last 10 Years

We all read about the U.S. national debt, and whether we should be concerned that it's in the $12 trillion range these days. But the United States isn't the only country carrying a huge amount of debt. In fact, it seems that operating just about any country is a money losing proposition.

According to the CIA's World Bank data, the majority of countries carry huge sums of national debt. And for most countries – although there are exceptions – that debt is constantly rising.

Look at Mexico: In 2000, the country had a $150.3 billion national debt. That's minuscule by U.S. standards, yes, but, like the United States, Mexico's debt is growing. The World Bank estimates that the country's national debt has risen to $189.4 billion in 2010.

If the United States was a consumer, then, it would have long ago maxed out all of its credit cards.