When it comes to news, who or what can you believe these days? It's a question we must always ask ourselves given all the fake news stories that have recently appeared in our news feeds and on most social media platforms. Do you check if the source or story is reliable before you "like," retweet, or share a story? Can you easily spot fake news?

It's often harder than it looks.

Don't believe us? We've created an interactive quiz to see if you can separate fact from fiction. Not only will you be able to score your results, but also it will give you an indication of how our survey respondents reacted when they first saw the same material.

Want some competition? Get your friends and family involved and compare scores.

Here's how it goes:

1) For the first part, you will see headlines only. After reading them, select the green "Real" button if you believe the headline is true, or the red "Fake" button if you feel it is false.

2) Next, we're going to show you a screenshot of an article. Use the green and red buttons like before and then view your results.

Think YOU can tell fake news from real news?

Take our quiz and prove it.

Did you score well? Are you ready to apply for a fake news editor position? Let's see how you stack up against over 1,000 people who took a similar quiz.

To better understand how people respond to news stories on the web, we interviewed over 1,000 politically diverse people (Republicans, Democrats, and Independents) to determine their habits and behaviors before sharing online news articles. In some cases, the findings were as diverse as their ideology.

When people saw a screenshot of the story instead of just a headline, they were slightly better at identifying fake news. But political party played a larger role in whether people were able to spot the false narrative. 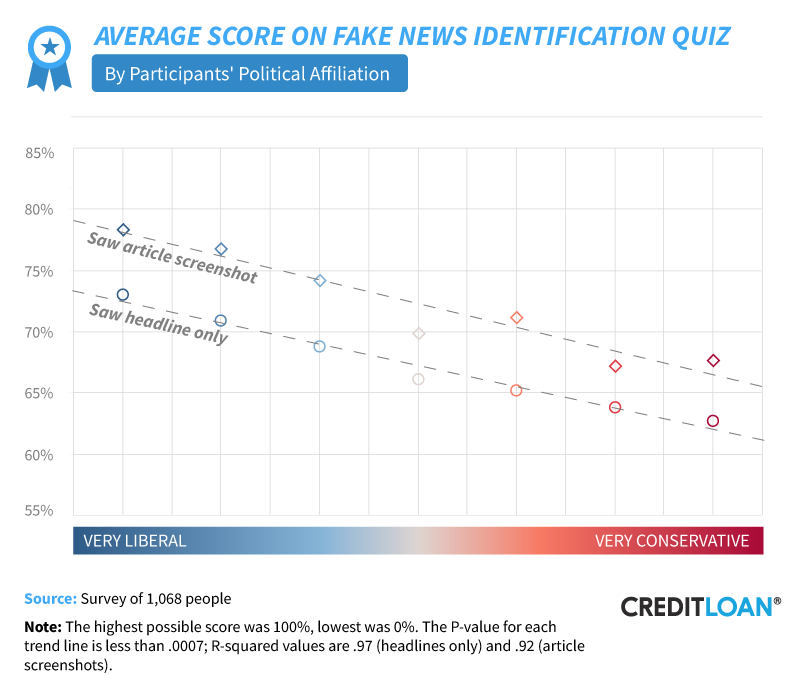 Conservatives seem to scream the loudest about fake news stories. However, studies show those on the far-right are not as good at identifying phony news as their peers in the middle and on the left.

Digging a bit deeper, when we look at the 2016 presidential election, supporters of candidate Donald Trump were more likely to consume fake news than supporters of the Democratic nominee, Hillary Clinton, by a margin of 40 percent to 15 percent, respectively.

The same study also indicated Americans aged 60 and older were much more likely to visit fakes news sites, regardless of their political affiliation.

Sharing What You Read

Our study showed 26 percent of Republicans and 20 percent of Democrats were likely to share a news story after only reading a few sentences or less. 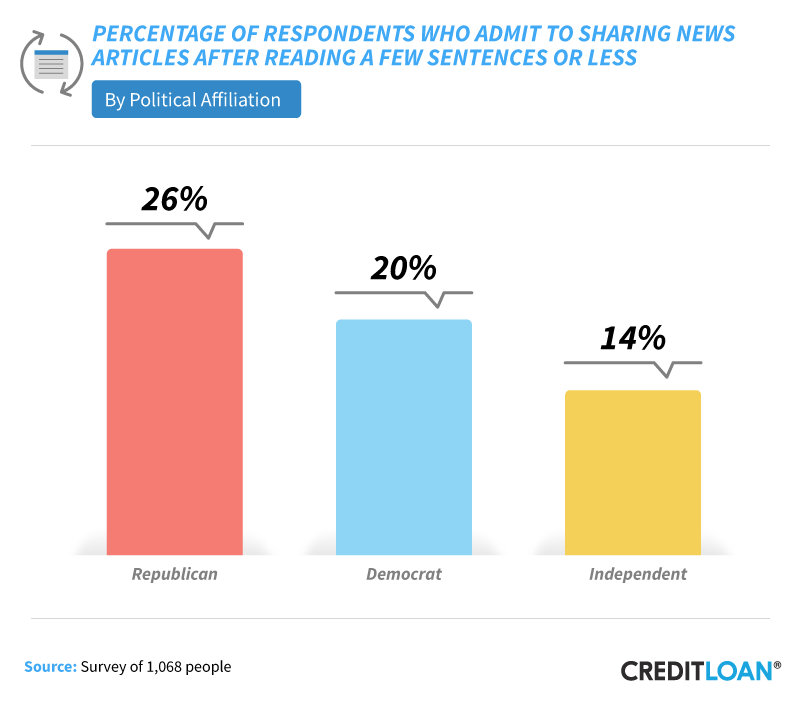 That equates to a 30 percent difference between Republicans and Democrats. To use the phrase "interesting" may be an understatement.

To further argue this point, a recent study by The Computational Propaganda Project at Oxford University titled, "Polarization, Partisanship and Junk News Consumption over Social Media in the US," has received both praise and criticism for the study methodology.

However, an opinion column in The Washington Post questioned the validity of the methodology. Specifically, that almost all of the 91 junk sources leaned conservative and how websites such as The Washington Free Beacon or National Review, founded by William F. Buckley and widely regarded as one of the nations more esteemed news and opinion sites, made this list.

As for Independents, only 14 percent shared news stories after reading a few words or sentences.

Here is where respondents from the two major political parties find some common ground.

Around half of Democrats and Republicans stated they understood a news story from the headline alone. 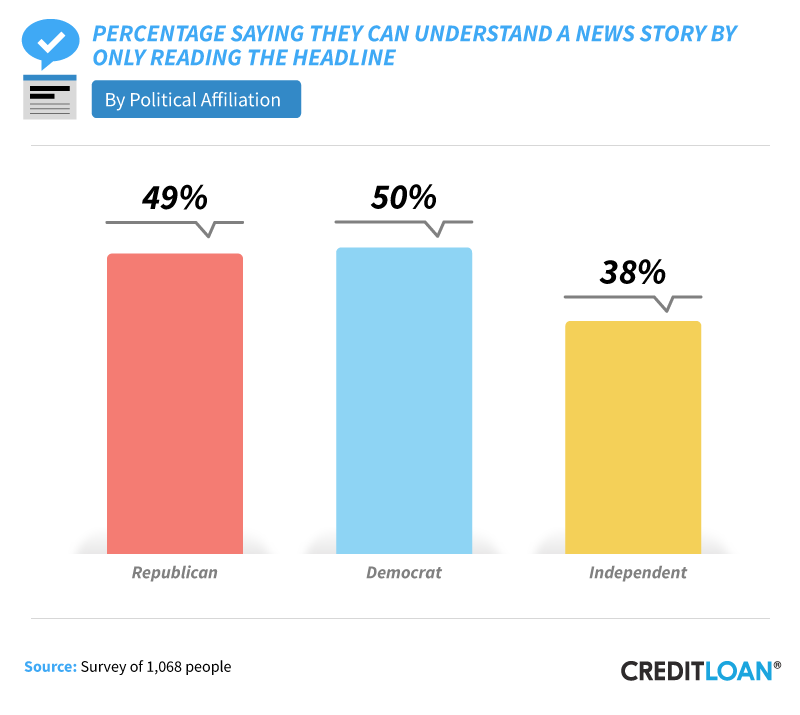 To reinforce the extent to which headlines are capable of influencing readers, an independent website run by students, designed to develop critical thinking skills and build awareness of current events, referenced a study by bit.ly that found 59 percent of article links were never opened.

To combat fake news, Facebook just announced an update to its news feed that would show the source of the story, related stories, a map of where the story has been shared, and the person or friend who shared it.

The thinking is people may hold others more accountable if they consistently share stories that have little or no factual basis.

Independents, once more staying true to their name, were much less likely to understand an article by the headline alone, at only 38 percent.

So where are false news stories born?

You can blame Russian trolls, and in some cases, you may be correct, given 48 percent of Democrats pointed to foreign governments as a source of fake news. 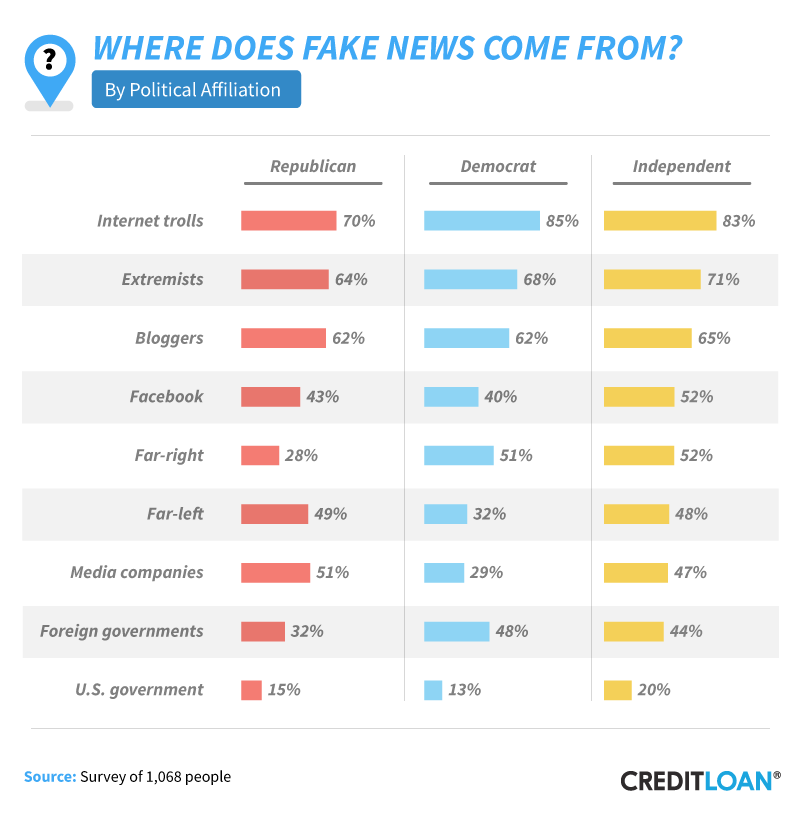 It probably comes as no surprise that roughly one-half of Republicans believe fake news originates from the far-left, with one-half of Democrats blaming the far-right.

However, Independents lean toward there Democrat friends with 51 percent blaming the far-right and only 32 percent saying the far-left is a culprit.

But to the issue, where does fake news originate? The answer is almost impossible to answer. President Andrew Jackson was accused of multiple immoral acts during his 1828 presidential campaign, and that indeed wasn't the first time a political falsehood was spread.

However, modern-day fake news began to capture our attention in 2016 when Republicans were eager to capture a White House that had been held for eight years by Democratic President Barack Obama. Just as eager to keep the seat in the Democrats' hands were Vermont Sen. Bernie Sanders and former first lady and Secretary of State Hillary Clinton.

It was 2016 when news editors began to notice streams of untrue political stories coming from small towns in Eastern Europe. It wasn't long before at least 150 news sites with foreign ties garnered vast numbers of followers on Facebook.

Today, social media companies, led by giants like Google and Facebook, are vowing to fight fakes news sites through the commitment of thousands of employees and millions of dollars and resources.

That probably doesn't make Independent respondents feel better since approximately half believed Facebook and other media companies were a significant source of fake stories.

Why Lie About News

People may lie, especially in politics, to gain an advantage or upper hand. Independents, followed closely by Democrats and Republicans, agreed false news existed to spread misinformation and intensify rumors.

Respondents across the board also agreed that such news was disseminated to create confusion, manipulate beliefs, and increase web traffic and page views. 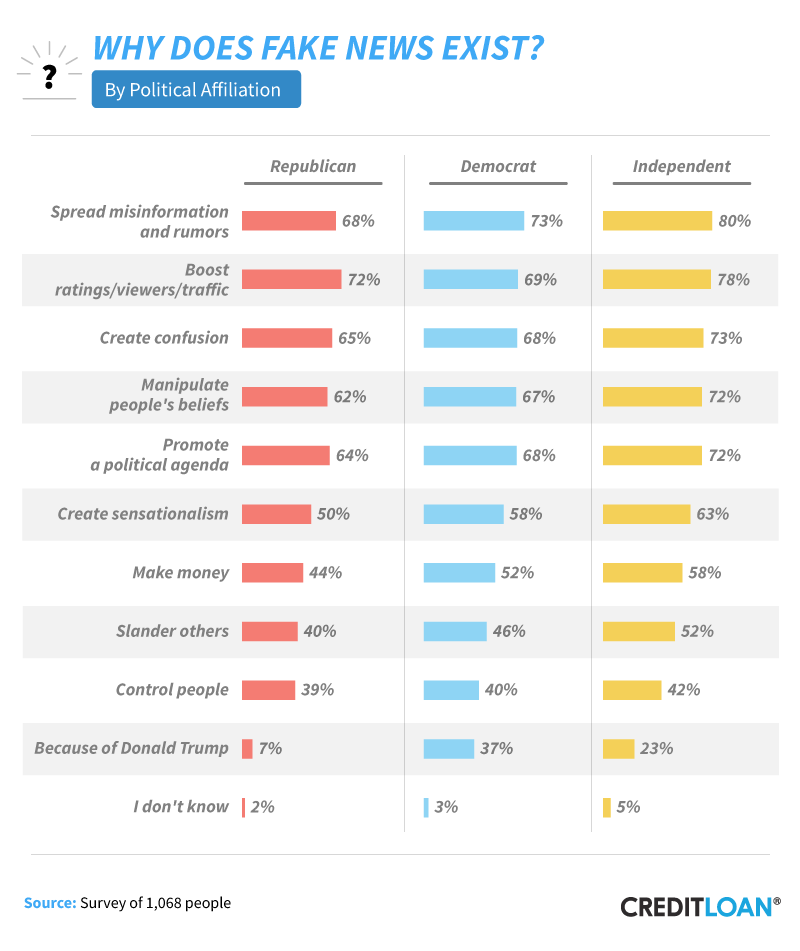 In fact, all three groups had similar opinions on most reasons, except 37 percent of Democrats thought fake news existed because of Donald Trump, whereas only 23 percent of Independents and 7 percent of Republicans felt the same.

Disturbed by this growing trend of fake news stories, one researcher set out to see if bots, automated software programs designed to control automated social media accounts, were the primary culprit.

After using software to eliminate the bots, he determined false news continued to spread at a similar rate and by the same people.

This could be one additional reason why two-thirds of people felt false news existed to promote a political agenda and serve to manipulate readers' beliefs.

Snooping for the Scoop

If you suspected a news stories you read online was inaccurate and were curious to learn the truth, would you turn to a credible source for answers?

Thankfully, at least three-quarters of respondents from all groups reported they look at multiple sources to determine if stories are true. But you may have to ask yourself if those sources would be reliable too.

Slightly over a third of respondents say they verify information by accessing fact-checking websites such as Snopes, Politifact or FactCheck. 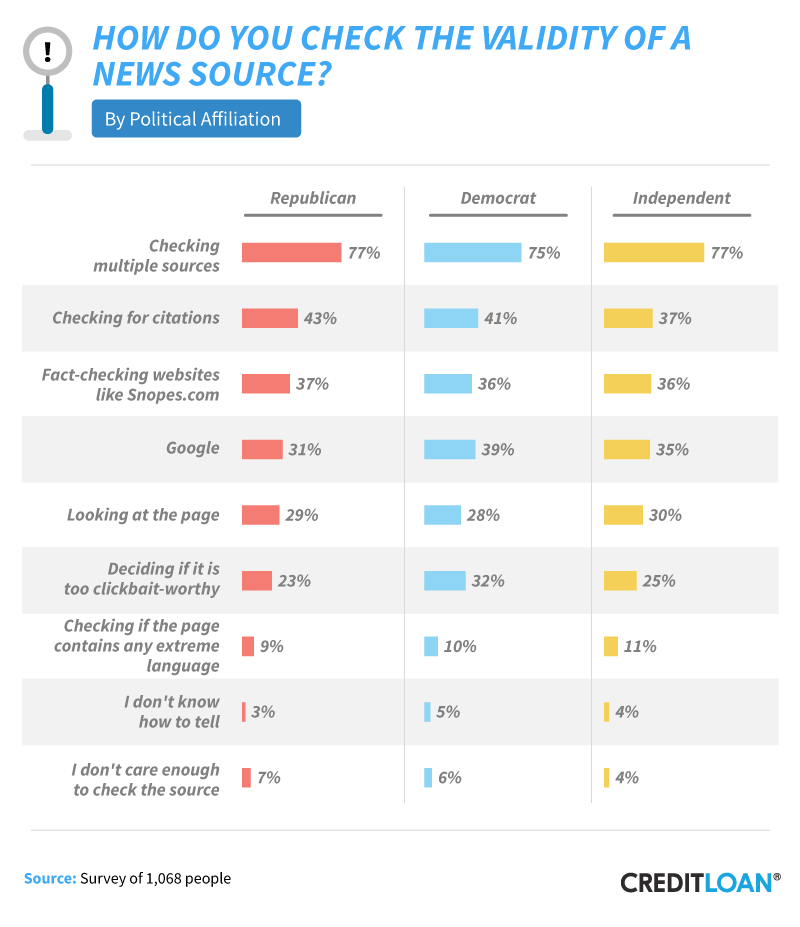 The real fact is these "fact-checking" sites have flourished in recent years, and many have gained credibility as being reliable and trustworthy.

And because politics is, well, political, partisan fact-checking sites such as Media Matters for America, a conservative website, and Correct the Record, a pro-Hillary Clinton super PAC site, have also gained high marks for validating claims.

Are there additional methods to confirm if an online news story is accurate?

Sure, and experts suggest you check these items:

Here's what we know for sure: Fake news is real, and social media companies have vowed to reduce its influence moving forward.

We also learned the more conservative someone is, the more likely they are to forward stories by reading small amounts of information.

Here's an idea. Are you're curious if these survey results describe your friends and family?Then forward this article so they can take the quiz too.

We collected responses from 1,068 people via Amazon's Mechanical Turk. Forty-three percent of participants were Democrats, 21 percent were Republicans, and 29 percent were Independents. Participants ranged in age from 18 to 82, with a mean of 38.0 and a standard deviation of 12.2.

Participants were excluded from the final analysis if they failed an attention check question or if they reported consuming online news articles rarely or never. Hypotheses were statistically tested where indicated.

The fake news quiz asked participants to determine whether 10 news stories were real or fake. They were first shown the plain text headlines of those 10 stories and then shown screenshots of those same news stories. To calculate participants' quiz scores, their responses were added up and multiplied by 10.

Want to share a real story about fake news? Be our guest. We encourage you to share this information with your readers for noncommercial purposes, and all we ask is that you link back to this page so they can read our analysis in detail.