The middle class has long been integral to the appeal of the American Dream: If hard work won't guarantee fantastic wealth, it should at least secure a comfortable future. According to some economists, however, that enduring ideal is in grave danger.

Recent research suggests the country's middle class is contracting, a trend many attribute to growing income inequality. As more families find themselves pushed to the poles of the earnings spectrum, how many still identify as middle class – and the financial security associated with that status?

According to economists at the Pew Research Center, the middle class entails a fairly wide range of family incomes, from $42,000 to $125,000 annually. But that wide span leaves much room for interpretation – and differing opinions.

We surveyed more than 1,000 individuals, determining the socioeconomic class with which they identified. We then studied their actual earnings and self-proclaimed class to see how their identification compared to the Pew Center's numbers.

How many feel they belong to the middle class when their paychecks suggest otherwise? Keep reading to find out. 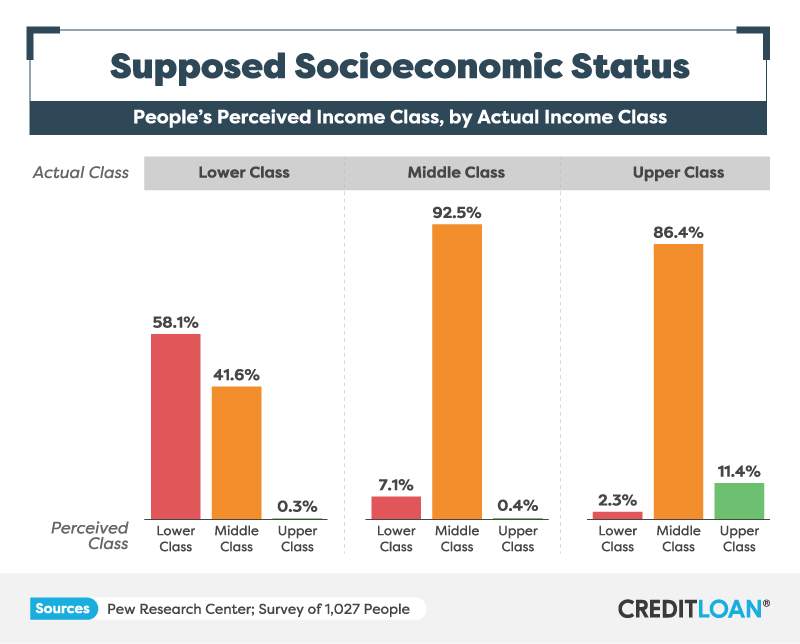 Perhaps upper-class individuals fail to identify their own good fortune because they view wealth in relative terms. After all, you can earn more than the vast majority of Americans and still feel impoverished in contrast to the superrich. Some researchers, however, suggest the affluent feel a kind of moral anxiety about admitting their privilege: Calling oneself rich can seem haughty, even if it's true.

At the other end of the socioeconomic spectrum, a significant portion of lower-class individuals also incorrectly identified as middle class. Yet the majority accurately assessed their own status, and virtually no lower-class respondents claimed to be upper class. 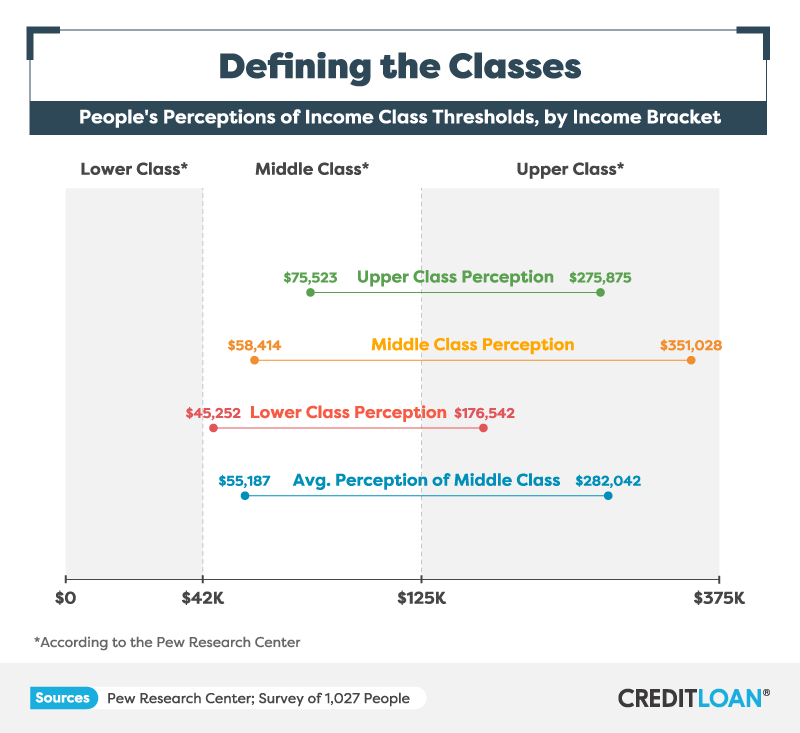 If so many respondents clearly disagree with the Pew Center's designations, how do they define each class themselves? People overestimated the minimum income needed to qualify for the middle and upper classes.

According to Pew's figures, the middle class begins at $42,000 – more than $13,000 less than what our respondents said on average. Perceptions of upper-class incomes were even more inflated. Our respondents put the threshold of the upper class at $282,042 on average, compared to Pew's $125,000 figure.

Each class defined these boundaries differently as well. Upper-class individuals set the lower threshold higher than middle-class respondents, who in turn suggested higher numbers than lower-class respondents. These findings demonstrate little consensus among the classes: Americans' standards of prosperity are shaped by their own experiences. 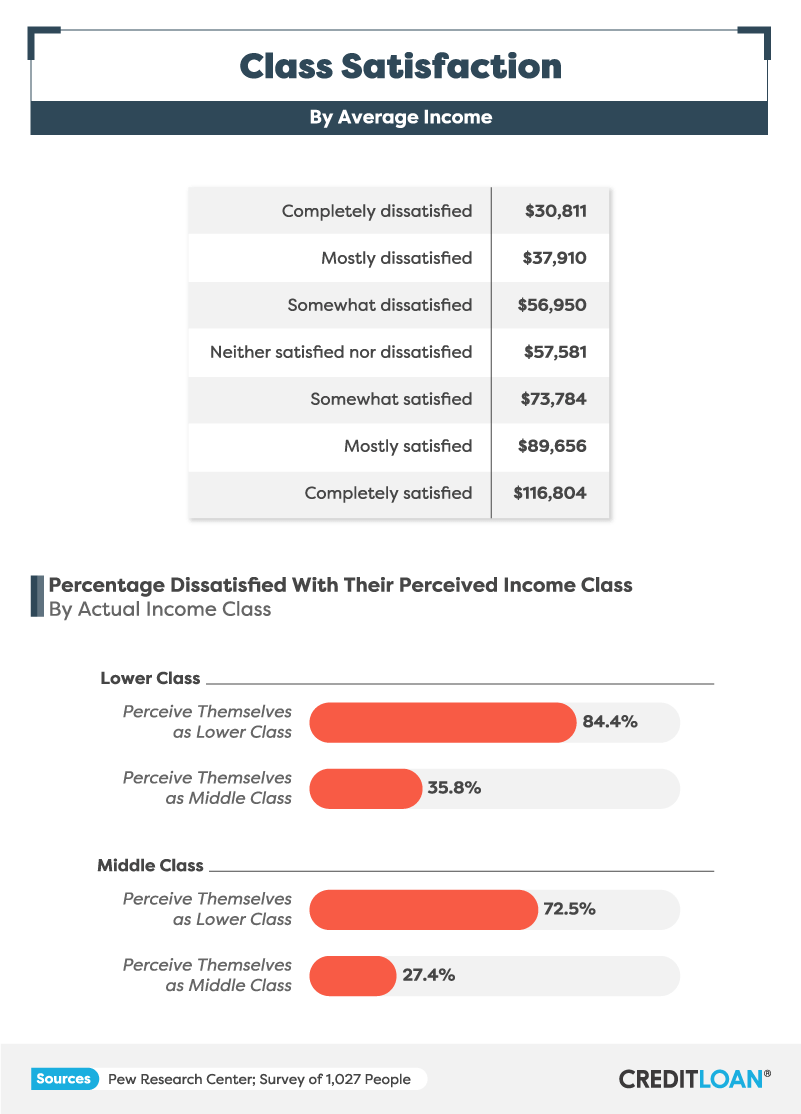 Class definitions may seem largely subjective, but we did find class satisfaction rise with income. The correlation was consistent: People who felt more comfortable with their class identities tended to earn more.

That said, our data also suggest class satisfaction can be influenced by where you believe you fall on the economic spectrum. Consider respondents who qualified as middle class: Of those who accurately assessed their class standing, just 27% were dissatisfied. But among middle-class people who thought they were lower class instead, over 72% felt dissatisfied.

The same dynamic was evident for lower-class individuals, although in precisely the opposite manner. Of those who mistakenly believed they were middle class, less than 36% felt dissatisfied with their status. But among those who accurately judged themselves as lower class, over 84% were dissatisfied.

Perhaps, as millionaire and business author Peter Voogd has suggested, "Being wealthy is a state of mind, but so is being broke." 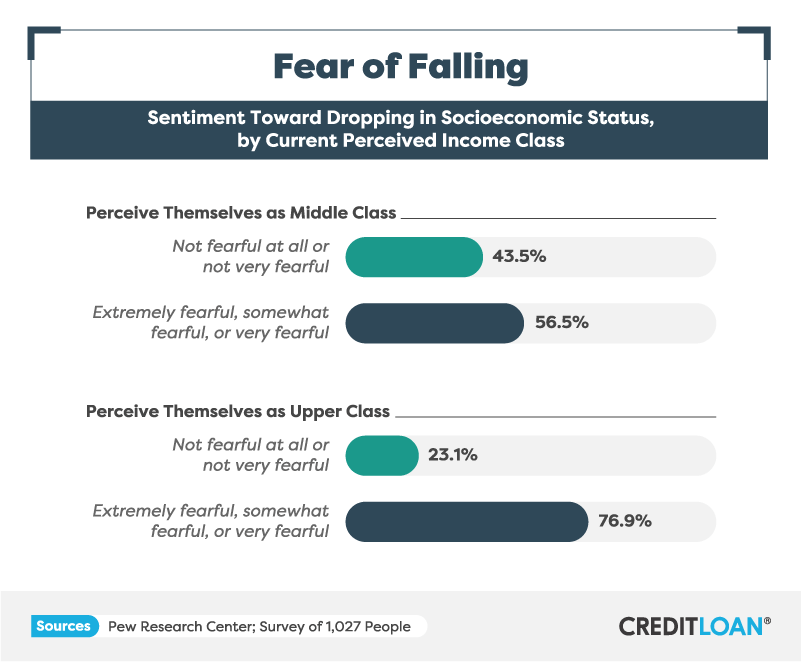 Believing you've attained membership in the middle or upper class is one thing; trusting you'll stay there is another. Recent surveys suggest most people stress about unexpected expenses; without emergency funds at their disposal, Americans feel their socioeconomic position is precarious.

These anxieties emerged in our data: Nearly 57% of those who identified as middle class were at least somewhat concerned about dropping a rung on the economic ladder. Unfortunately, their concerns are not entirely unjustified, given that automation may eliminate many middle-income jobs in the years to come.

But in an unexpected twist, individuals who identified as upper class were actually more fearful than those who identified as middle class about dropping in socioeconomic status. In fact, more than three-quarters of this cohort expressed anxiety about the prospect.

Some recent studies suggest retirement is a primary concern for America's wealthiest individuals – those who may have to worry about having to curtail their lifestyles in their golden years. Yet that concern is at least as pressing for middle- and lower-class workers as well. Whatever the case, it's worth noting feeling rich does not mean the end of financial fretting. 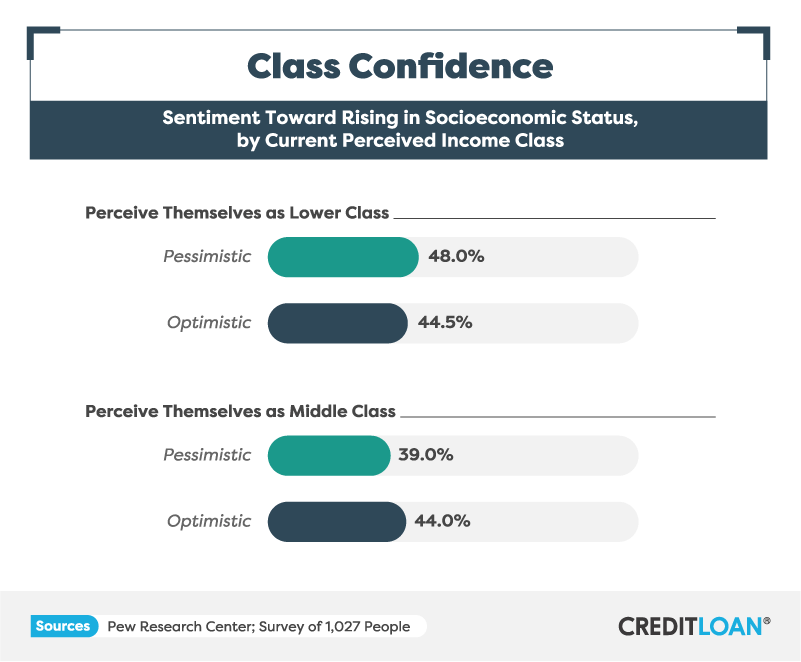 If anxiety about losing one's economic standing is widespread, do Americans also believe in positive economic mobility? Among those who felt they were lower class, opinions were thoroughly mixed on this subject. Nearly half expressed pessimism about improving their class standing in the future – although 44% felt optimistic about improving their financial circumstances as well.

Perspectives varied nearly as much among the self-identified middle class, although optimism did prevail to a greater extent. Of this group, 44% had high hopes of improved economic standing, whereas just 39% were pessimistic.

If American economic optimism seems discouragingly limited in these findings, research indicates other nations may be even more cynical about opportunities for advancement. Relative to Europeans, for example, Americans are more likely to overestimate the opportunity for social mobility in their country.

Although many Americans seem prone to misunderstanding their own class standing, it's possible to find a positive undercurrent in our project's findings. If upper- and lower-class individuals often regard themselves as middle class instead, perhaps that class identification is based on a sense of shared values, rather than the size of their paychecks.

Even in an ever-changing economy, the essential principles of middle-class prosperity can still serve Americans well. A dedicated work ethic, thrifty savings, and a smart approach to debt and credit can empower a new generation to financial security.

But these values must be adapted to the 21st century and all the disruption and opportunity that define our time. Young Americans can attain the class status they desire, but they'll need the right expertise and dedication to do so.

Let our team help you along the path to your own financial ambitions. With insights and recommendations on a range of personal finance subjects, CreditLoan gives you the confidence to invest in whatever future you choose.

We collected survey responses from 1,027 people from Amazon's Mechanical Turk. 52.3% of participants were female, and 47.7% were male. Participants ranged in age from 18 to 78, with a mean of 37.7 and a standard deviation of 12.6. We supplemented our survey with data from the Pew Research Center. This data allowed us to group our survey respondents into income classes.

The data we are presenting relies on self report. There are many issues with self reported data. These issues include, but are not limited to: selective memory, telescoping, attribution, and exaggeration.

If you'd like to share our work with your own audience, you're free to do so for noncommercial purposes. If you do, please link back to this page to attribute our team for this project. After all, giving credit where it's due is a value all classes can celebrate equally.