How Speaking Up About Workplace Issues Impacts People's Careers

Why does complaining make us feel so good? For many, the relief of letting go of something bothering them can be enough to relax. Bringing attention to someone's poor work ethic or behavior without confronting them can make employees feel more confident in their performance. Venting can come from a place of concern or care and can even be good for our health.

Many people experience stress at work, and letting out steam from time to time about those issues can be helpful, even cathartic. As long as complaining is done in a productive and non-hurtful manner, it can even lead to promotions or other career successes. Bringing problems to the manager's desk can prove to be a valuable tool as an employee.

We surveyed 1,014 employed people to find out how the average worker vents and the overall impact of how they handle workplace frustrations.

Reasons Why People Are Irritated at Work

Dissatisfaction at work can come from many different places, leading to unhappiness and the likelihood that someone will end up in or contribute to a toxic work environment. Half of all respondents felt frustration about their compensation at work, making it the most common work-related issue. Only 19% of Americans believe they are paid fairly for the amount of work they are responsible for. 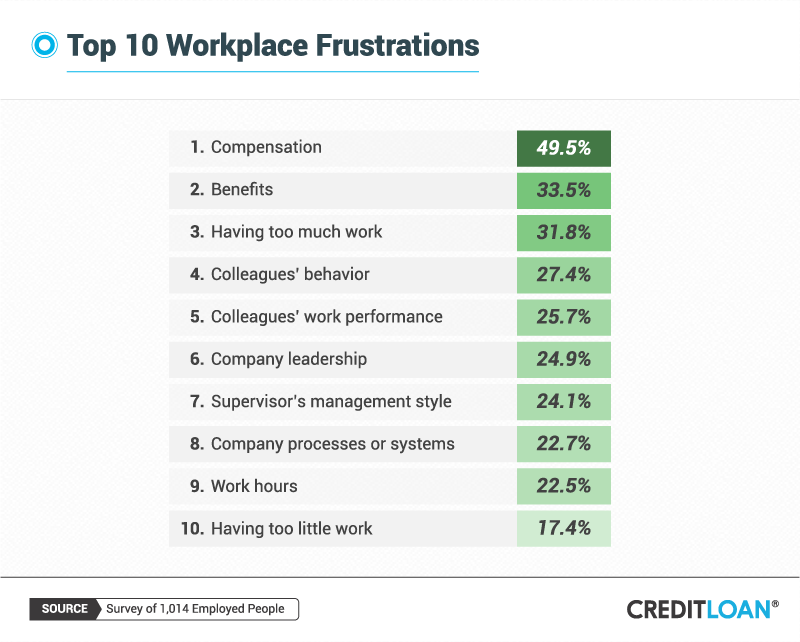 Issues with benefits came right after compensation on our list. A low salary definitely makes it difficult for people to justify staying in a job they do not like. Pair that with minimal or non-existent benefits, and you could have an employee who has one leg out the door. Roughly a third of respondents reported frustration toward their benefits – or lack thereof. Across the U.S., nearly a quarter of full-time workers do not receive benefits from their employers at all.

Competitive benefits offerings and "cost of living" raises can help reward employees for hard work and equalize any discontent in the office. These solutions are a good start, and upper-level executives can implement other ways to improve employee sentiment.

For some people surveyed, pay wasn't as much of a concern as the people in the workplace. More than a quarter had issues with their colleagues, and almost as many people weren't satisfied with their company's leadership.

How We Vent About Workplace Problems

The people surveyed were more likely to discuss concerns or issues in the workplace with co-workers rather than supervisors. Even among issues supervisors might have the power to change or resolve, workers were still more likely to talk to one of their peers. 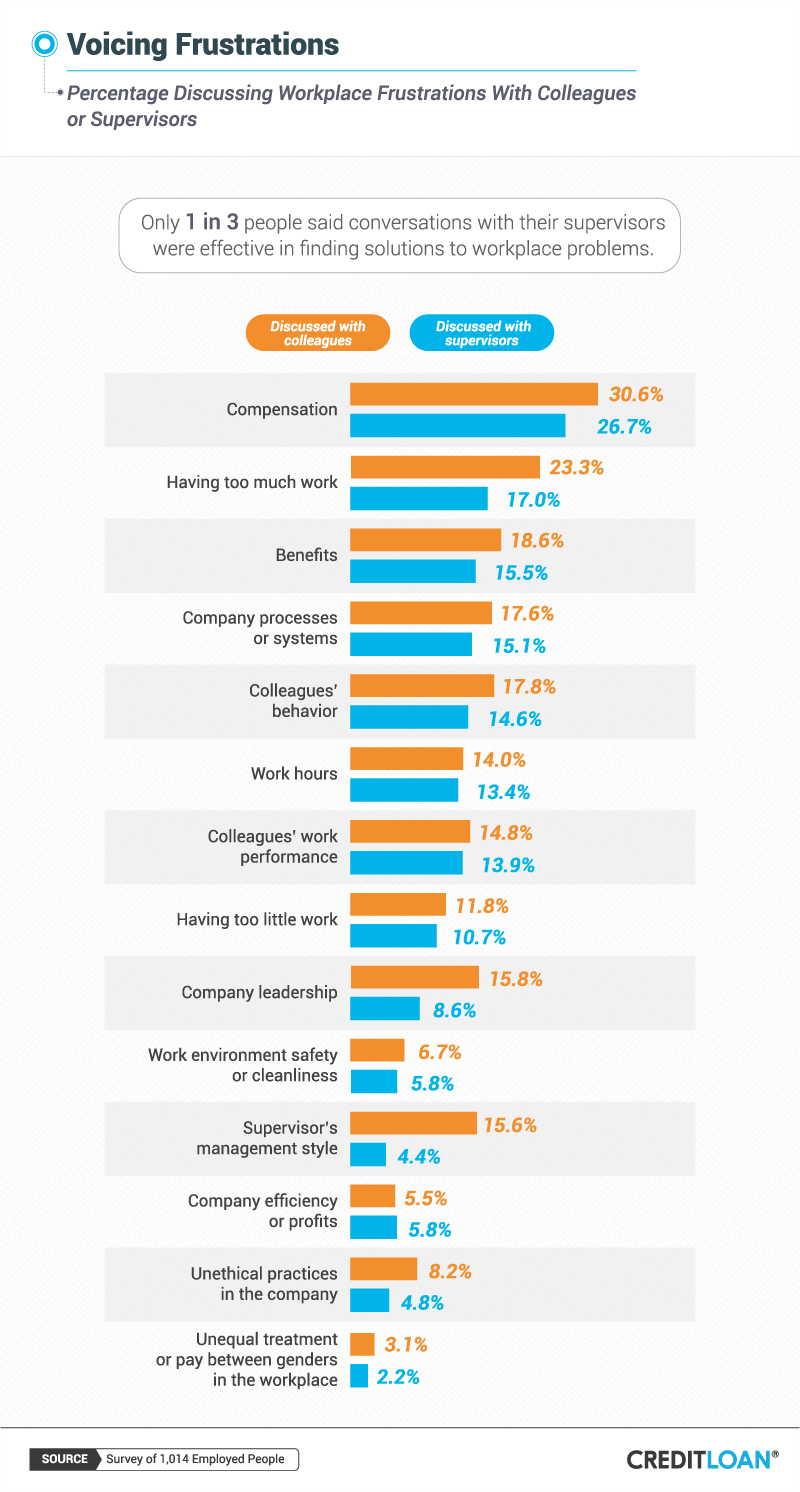 There is often a demonstrable gap between workers and their bosses, both in their company role and pay scale. Among America's highest-earning companies, chief executives make 130 times more than the company's average worker. This sizeable gap could make workers hesitant to bring issues about money to their attention. Workers are more likely to sympathize with other people in the same situation, such as their co-workers earning an equal salary.

One of the only categories workers were more likely to go to managers about was the company's general efficiency. However, respondents were less likely to bring up colleagues' work performance and behavior to a boss. These issues go hand in hand, as a company's efficiency is dependent on the synergy and technical skills of the workers. Initiating a conversation that addresses a specific worker can be scary, considering some may feel they are jeopardizing someone's career with their complaint.

Complaining at work can sometimes do more harm than good, as it becomes more ritualistic and less proactive. By hesitating and venting instead of taking steps to solve the problem, the status quo remains and the problem still exists.

Learn How to Successfully and Diplomatically Approach a Supervisor

That hesitation to approach a superior, however, may be something you want to abandon. A positive worker is someone who is motivated by the company's overall success, not just individual success. Therefore, having good communication with a boss can bring issues to light that can be solved before they become a larger problem. These employees are valuable to supervisors, who may be invested in finding and rooting out inefficiencies. 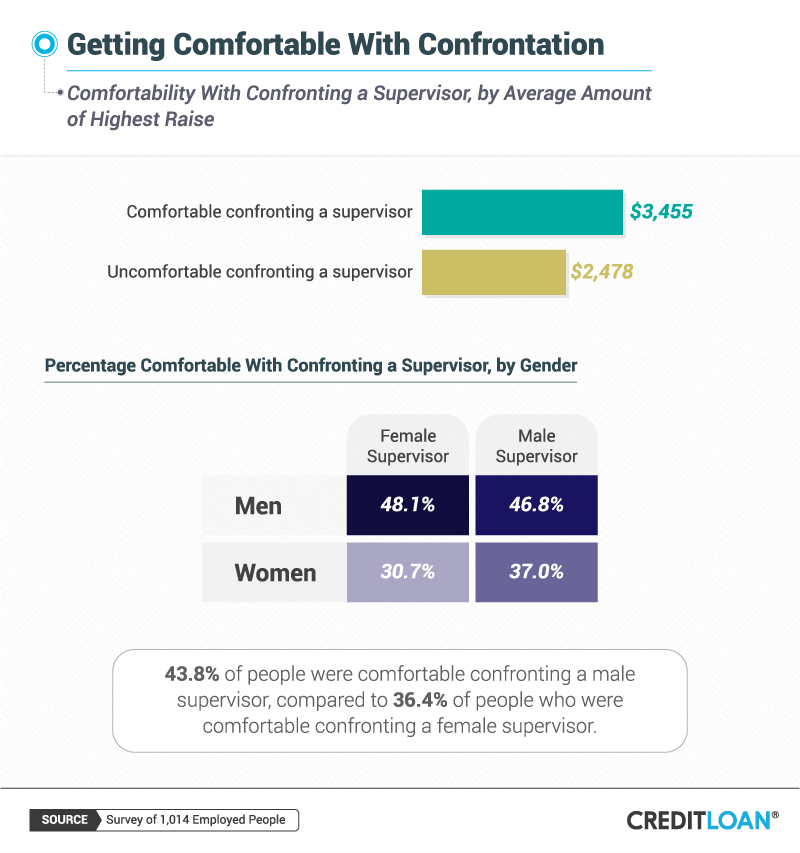 In fact, respondents who were comfortable with directly confronting a supervisor were used to higher raises – on average, $1,000 more – than employees who did not feel comfortable stirring the pot. Being more direct with their concerns and confronting management head-on gives these employees the unique opportunity to express their desires.

Gender creates a dynamic factor in the equation as well. Those with male supervisors were more likely to report feeling comfortable with confrontation than those who reported to women. However, women and men with a supervisor of a different gender were more likely to feel comfortable with confrontation compared to those who reported to someone of the same gender.

Regardless, there are fewer women in management, making it more rare for a female employee to have the opportunity to sit down with a female boss. Historically, women have fought for greater representation and opportunity, and while things are improving, women at the very top are still rare: In 2018, less than 5% of Fortune 500 CEOs were women.

Bringing up important issues with the boss can seem intimidating, especially if it is related to your workload or money. Staying away from sensitive topics feels like an automatic response when bringing up these issues can really pay off in the long run. Employees who are proactive about workplace issues are likely to receive higher raises than those who stay away from confrontation. 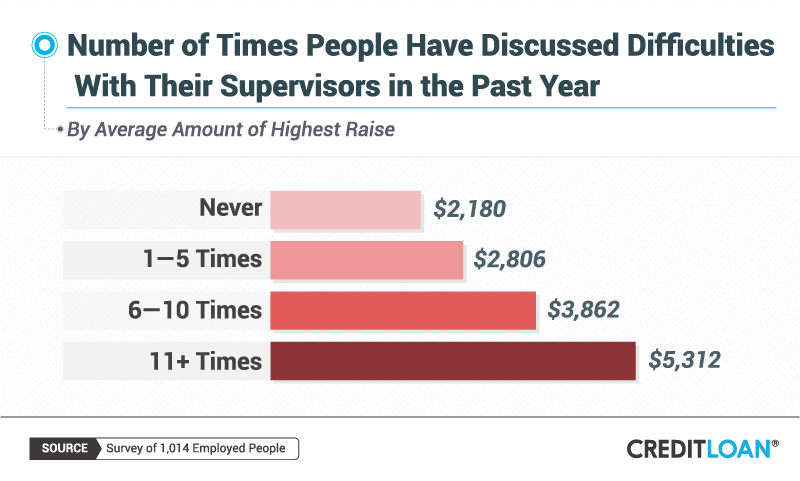 Among respondents in our study, the highest raise of people who had never taken an issue to their supervisor in the past year was half the amount of those who brought up issues 11 or more times in the past 12 months. Of course, if there is nothing to complain about, an employee shouldn't force a conversation if the sole reason for the meeting is to get face time with the boss.

The point here is that employees who earn higher raises may be identifying flaws in a particular process in the company and recognizing when it is appropriate to bring these to the manager's attention. The meeting itself is important and must be handled with care. If both the employee and employer are receptive and attentive, it will ensure both parties are engaged in a productive conversation. This can be the difference between being appreciated and being a nuisance who brings frivolous things to the manager's desk.

At the end of the day, sometimes there isn't much an employee can do if his or her supervisor is not an effective leader. According to a recent Gallup Poll, employee engagement is closely tied with who the boss is, and unfortunately, not everyone has a manager who excels at his or her job. Many managers lack the skills or talent to manage a team well. This can lead to small issues turning into large ones when combined with a lack of reporting by timid employees.

Age, Gender, and Tendency to Confront a Manager

Younger generations are more likely to start a conversation about work-related issues. This could be due to the "pull yourself up by your bootstraps" mentality among baby boomers, leading some to believe they can solve problems themselves and don't need anyone's help. 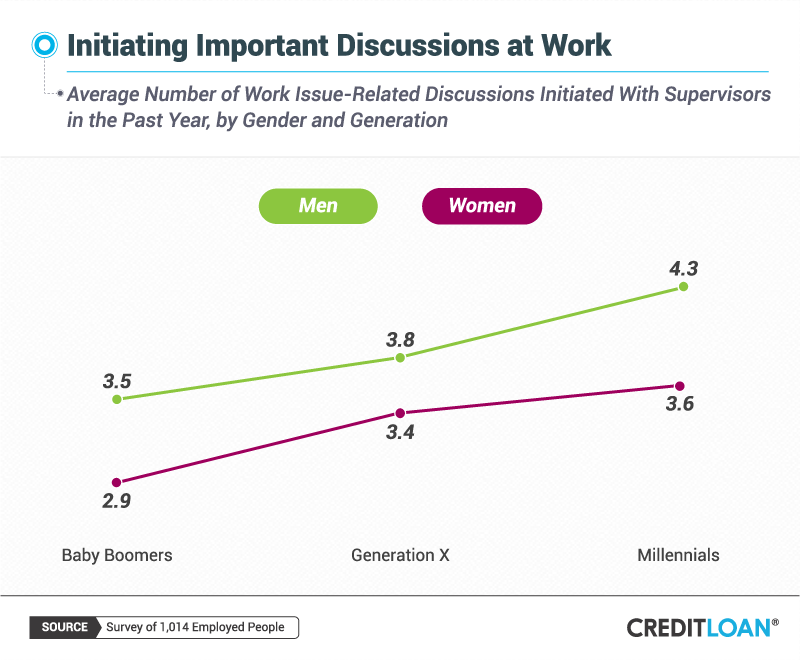 Younger generations are adopting a new school of thought for the workplace: collaborating for success. Independence is an essential skill too, but teamwork and positive reinforcement from management are becoming the standard in the workplace today.

Across all age groups, women tended to bring up issues with management less often than men, but each generation of women spoke up more often than the one before it. Currently, things have started to change, with more women than ever taking the initiative in the workplace and speaking up more often in team meetings. Perhaps, as women speak more assertively, more of them could step into leadership roles and earn greater raises.

The Things Your Boss Wants You to Bring Up

Wonder what's going on inside your manager's head? This list could help. We've compiled the top issues that managers want their employees to talk to them about more often. First on the list? Over 41% of managers want to know if someone is overwhelmed by their workload. 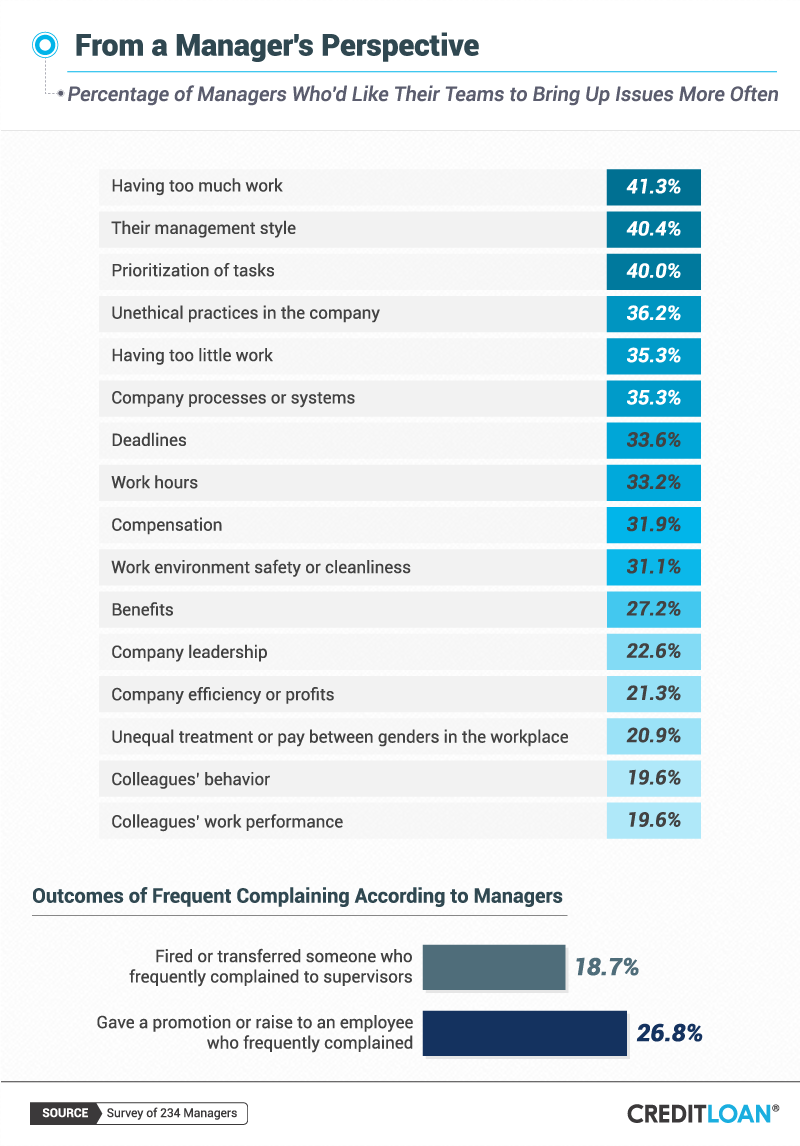 Managers would also much rather hear constructive criticism about their management style than compensation or hours. Some things aren't possible to change, while other issues can be resolved with a meeting. Employees should consider all options, though: Some conversations are better taken to human resources.

Specifically, issues between co-workers ranked the lowest among all issues supervisors want to be brought to their attention. An effective employee handles disagreements between peers with professionalism and knows if and when others might need to get involved.

Although most issues managers prefer to hear about involve the workplace itself, perhaps more than 21% of managers ought to care more about inequality in pay between genders to establish a fair playing field for all employees.

We have seen that complaining can be the root of establishing a productive relationship with the boss. However, too many issues or complaints can have the inverse effect – 18.7% of managers have fired someone who complains to management too often.

There is a big difference between complaining for the sake of complaining and creating a dialogue about something that is problematic in the office. It can be quite easy to detect when an employee is bringing up problems to solve them, rather than doing so to make themselves look good. Filing empty complaints too often could also cause someone to develop a reputation of being easily stressed, which could knock them out of consideration for that big promotion.

Make Your Complaints Worth Something

On any given day, most Americans would say they're stressed at work. Complaints about co-workers or supervisors need to be handled productively if positive change is expected. Simply venting about problems doesn't attack the root of the problem.

A supervisor-employee relationship does not have to seem scary; on the contrary, it can be the difference between getting the big raise or promotion and being passed over. The more a manager sees an employee voicing concerns or putting the company first, the more likely they are to financially reward that behavior.

Keeping your goals in mind for your career can lead the way for your financial goals to be actualized.Realistic financial planning and setting expectations for yourself can make the difference between advancing in your career and getting left behind.

On average, participants were employed by their current company for 6.1 years. Outliers greater than three times the standard deviation plus the mean were excluded from analysis concerning the number of raises, the average amount of the highest raises, the number of conversations initiated with management, and the number of promotions.

Additionally, although we found relationships between the average amount of the highest raises, comfortability with confrontations, and the number of conversations initiated with supervisors, there are many variables we did not investigate that could account for these relationships, such as position or seniority within company and the industry and size of the company. Future studies should explore these relationships.

The next time you gather around the water cooler, so to speak, share these data for noncommercial purposes with your co-workers. Inform people of the proper ways to confront management and keep your workplace an open, efficient space. Please use proper citation and give the author credit when offering these tips and tricks to your friends and peers.