As American student loan debt neared $1.5 trillion in 2017, many recent grads confronted an uncomfortable question: Was their college education worth the cost?

Certainly, there’s strong evidence of a diploma’s impact on earnings. Today, college graduates earn 56 percent more than those with a high school degree alone, the largest gap ever recorded.

Many caution potential student borrowers to consider more than these appealing salary figures. Graduation and employment prospects vary dramatically among institutions, and lawmakers have recently sought more extensive reporting from schools on these measures of educational value. Even college dropout Bill Gates has taken an interest in the issue, demanding better data to help aspiring college students assess whether their tuition costs will truly pay off.

In this project, we sought a clearer measure of the merits of college debt by asking 1,000 borrowers about it. We surveyed participants about the total amount they’d borrowed and whether they felt their investment was worth it. Our results show how complicated it is to assess the value of a college education and just how high the stakes are for students across the country. 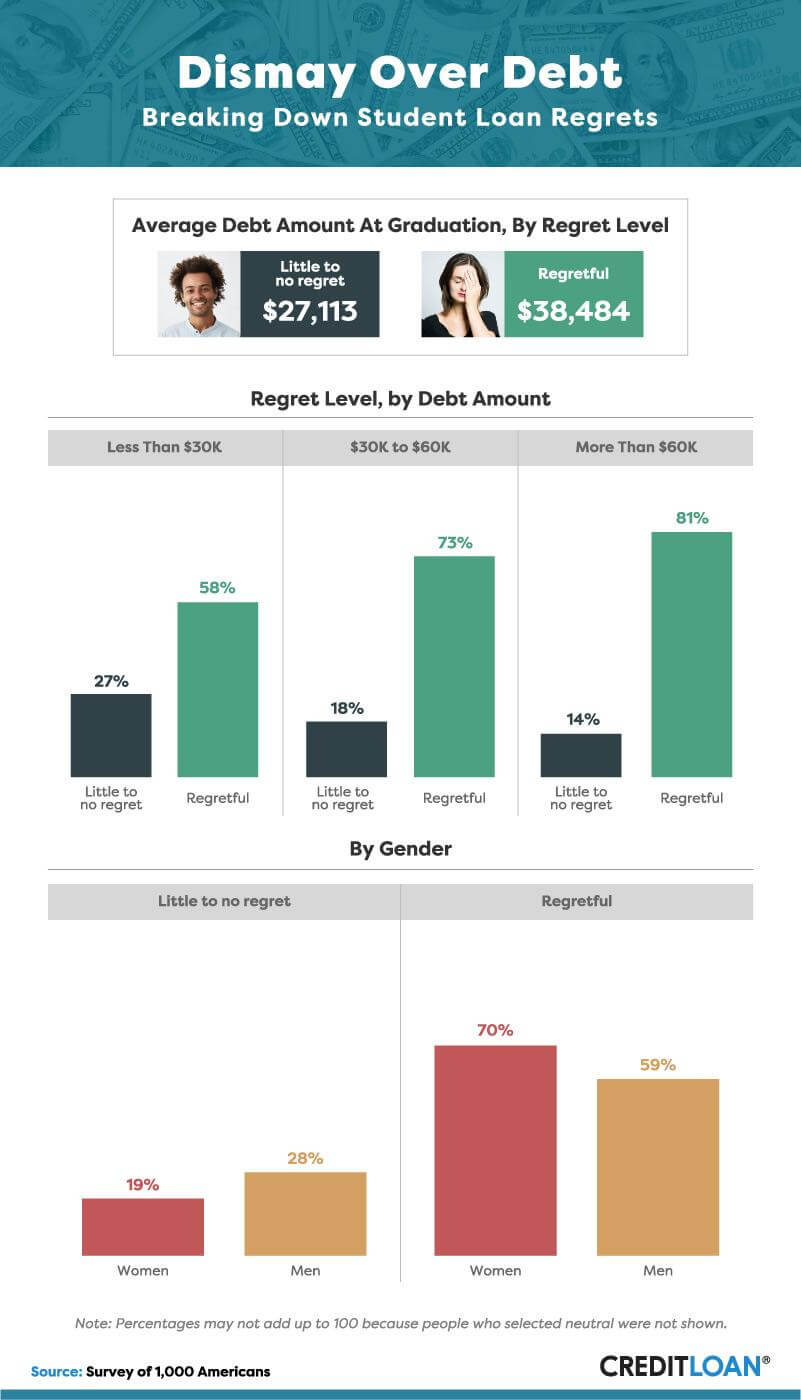 Predictably, those with higher loan balances were far more likely than those with lower balances to express regret. Over 80 percent of borrowers with more than $60,000 in loans regretted their debt decisions. While those in lower debt brackets were more likely to feel comfortable with the debt they’d taken on, the majority in every group felt regret about their loans. With some estimates putting the average student loan debt at more than $37,000, this means even those with less debt than most feel conflicted about their borrowing.

Women were more likely than men to feel regretful, with 7 in 10 female debtors wishing they’d handled their college costs differently. Perhaps this dichotomy is due, in part, to the lingering gender pay gap, which recently showed signs of widening for millennial women. Faced with lower incomes, women may have more reason to question whether their college costs were a worthwhile investment if they find themselves living paycheck to paycheck.

Ostensibly, college prepares students for professional success: Nearly 3 in 4 employers planned to hire new college graduates in 2017, and those with a college degree have the lowest rate of unemployment. However, more than half of respondents with less than $60,000in debt felt their degree had no bearing on their current job. 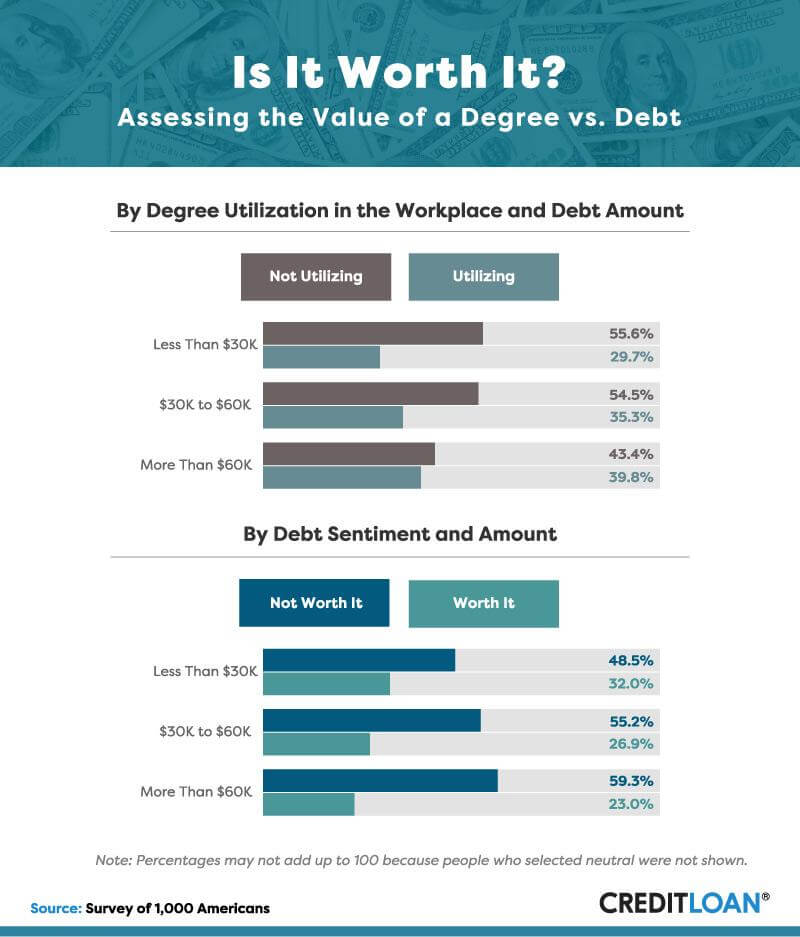 These findings imply either that borrowers are underemployed (unable to find a job corresponding to their training) or have willingly pursued work in another field. While a degree is a prerequisite for many positions, many companies don’t require applicants to have majored in a relevant subject.

Those with highest student debt totals were most likely to report using their degrees in their work – likely because physicians and lawyers fit this description and accrue extensive debt through pre-professional graduate training. Interestingly, though, they were also least likely to say their debt was worth it given their current professional circumstances. Indeed, limited employment opportunities in the legal profession have actually caused many law schools to close their doors of late. As our findings show, however, the legal field isn’t the only industry beset with student debt regret.

When we considered which professionals felt the greatest remorse about college costs, fields that don’t typically require a degree predictably topped our list. This trend was particularly pronounced among homemakers, with more than 93 percent expressing regret over their educational costs. 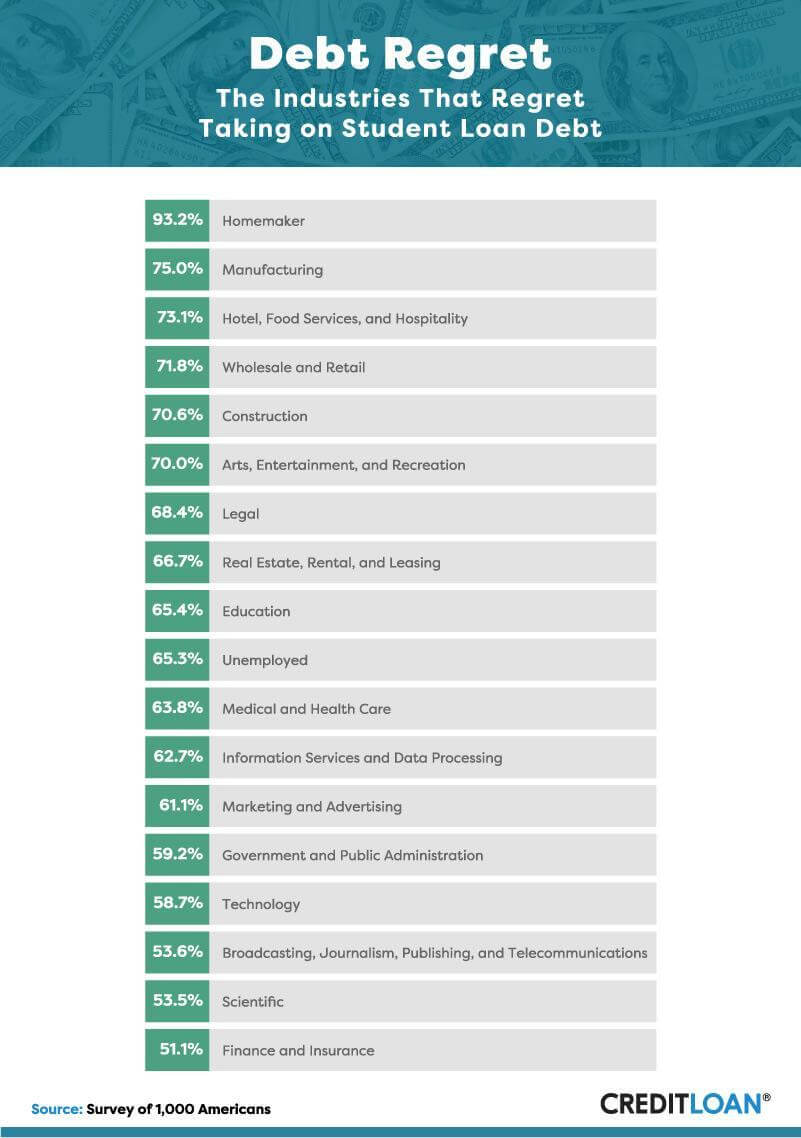 Those in the arts and aforementioned legal professionals also expressed overwhelming regret, followed closely by real estate workers. Those in the business of buying and selling homes may have particular reason to reconsider their educational expenses: Real estate brokers rate among the best paying positions that don’t require a degree. Teachers, meanwhile, may face the opposite dilemma. They do need a degree, but many struggle to pay their student loans on relatively low salaries.

For borrowers, regret about college debt can only be intensified by the fear of an inability to pay them back. Just as women were more likely to report debt regret, they also expressed anxiety about their debt burden more often and more intensely than men. Nearly 8 in 10 female borrowers reported anxiety about their student loans, and the intensity of these feelings was 17.6 percent higher than what anxious men reported. 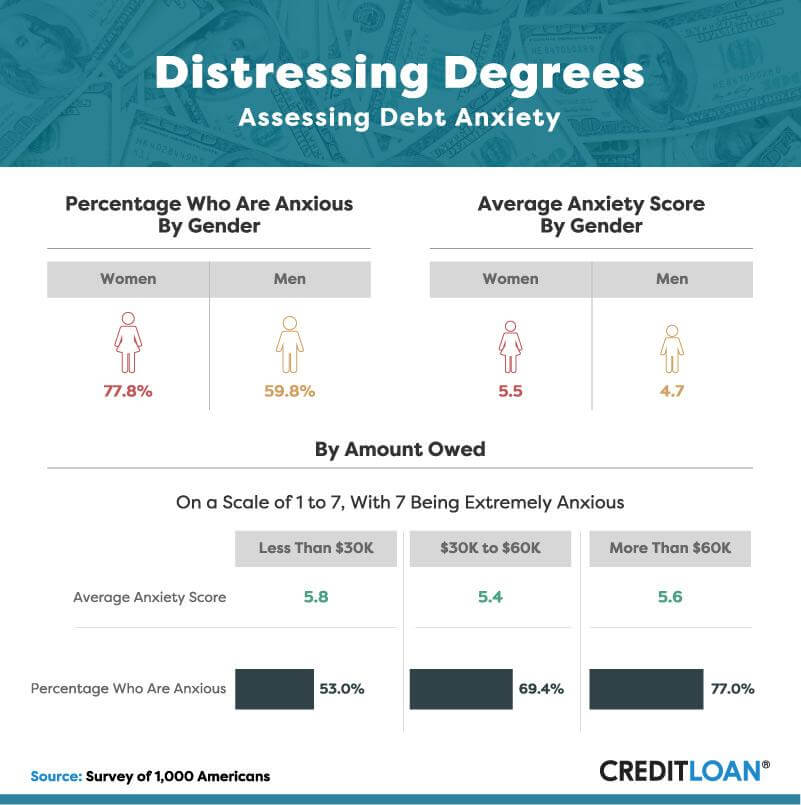 Understandably, borrowers with higher debt were also more likely to feel anxious about repaying it. For those with debt in the range of $60,000 or more, 77 percent of borrowers were concerned about the debt they’d taken on. That’s 24 percentage points above those with $30,000 in loans, though the majority of that group felt debt anxiety as well. 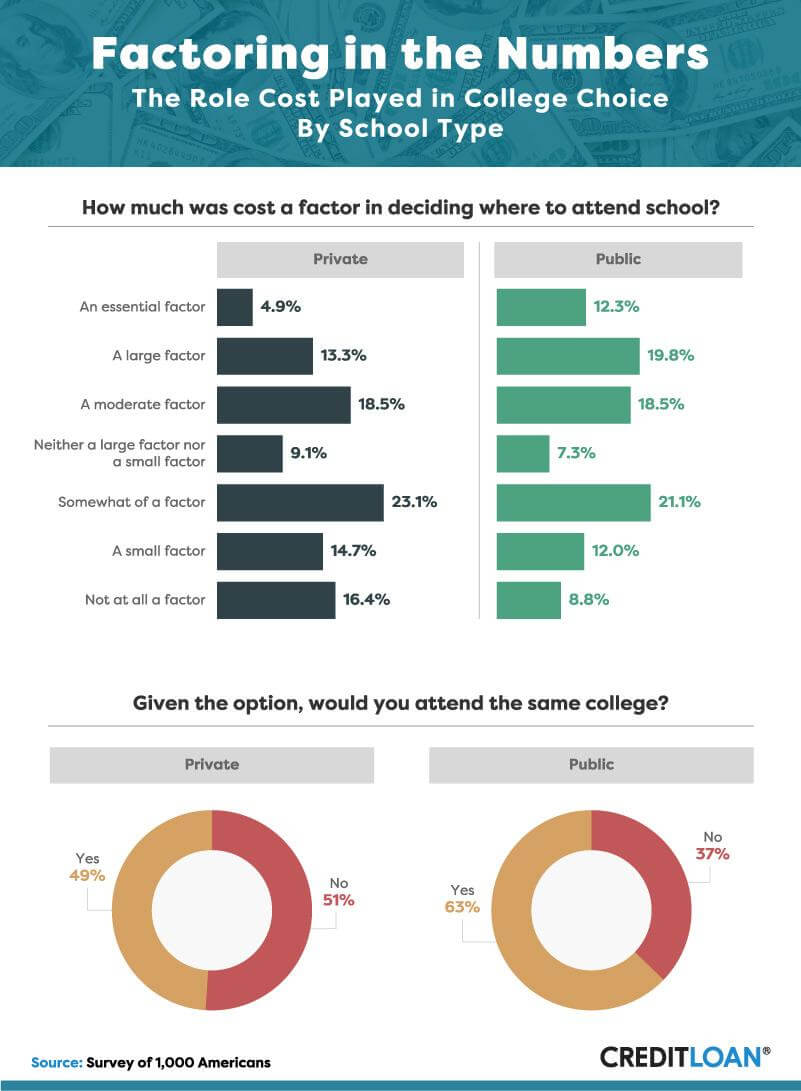 Because so many borrowers feel regret retroactively, we asked them how cost initially contributed to their college choice. We found a fairly varied pattern of emphasis on tuition, though those who attended public universities were more sensitive to cost overall. In fact, less than 5 percent of those who went to a private college considered cost an essential factor, and over 16 percent said it wasn’t a factor at all.

Perhaps private college attendees wish they’d reflected on price more thoroughly. More than half said they’d go to a different school if they could make their decision again. Conversely, just a little over 37 percent who went to a public college said they’d go elsewhere if they could. This contrast reflects a massive gap in relative price: The average private college tuition was more than three times higher than in-state public university fees for the 2017-18 school year.

In exploring the question of debt regret, the question of fairness looms large. As tuition has soared in recent years, can the price of postsecondary education really be considered just? 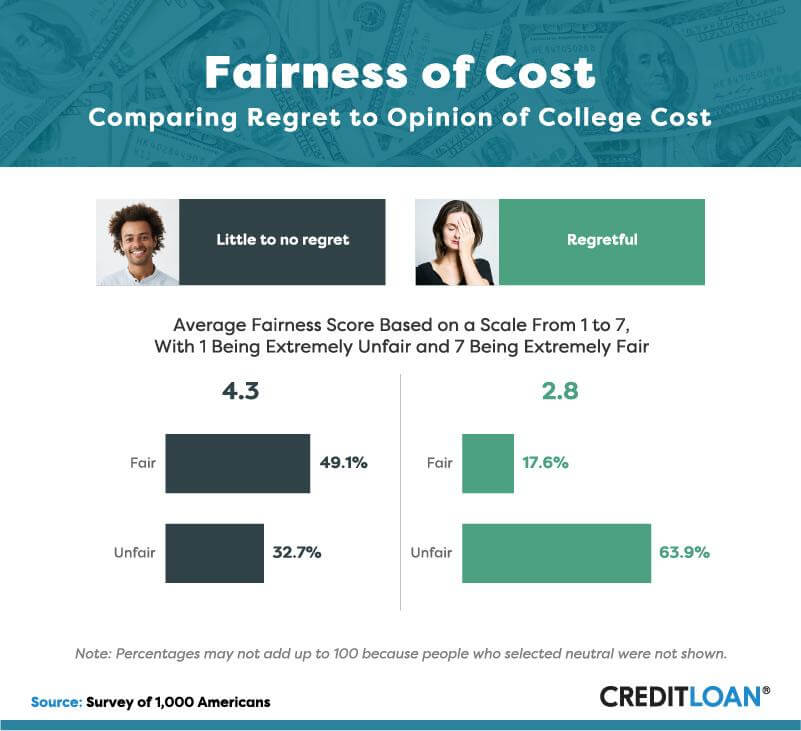 According to many borrowers, the answer was a resounding “no.” Almost 64 percent of those who regretted their college debt said the cost of their education was unfair. Their likelihood of rating their fees as fair was more than 30 percentage points higher than those with little or no cost regrets. Even among those who had little or no regret about taking on loans, slightly less than half felt they’d been charged a fair price for their education.

What They’d Do to Be Debt-Free 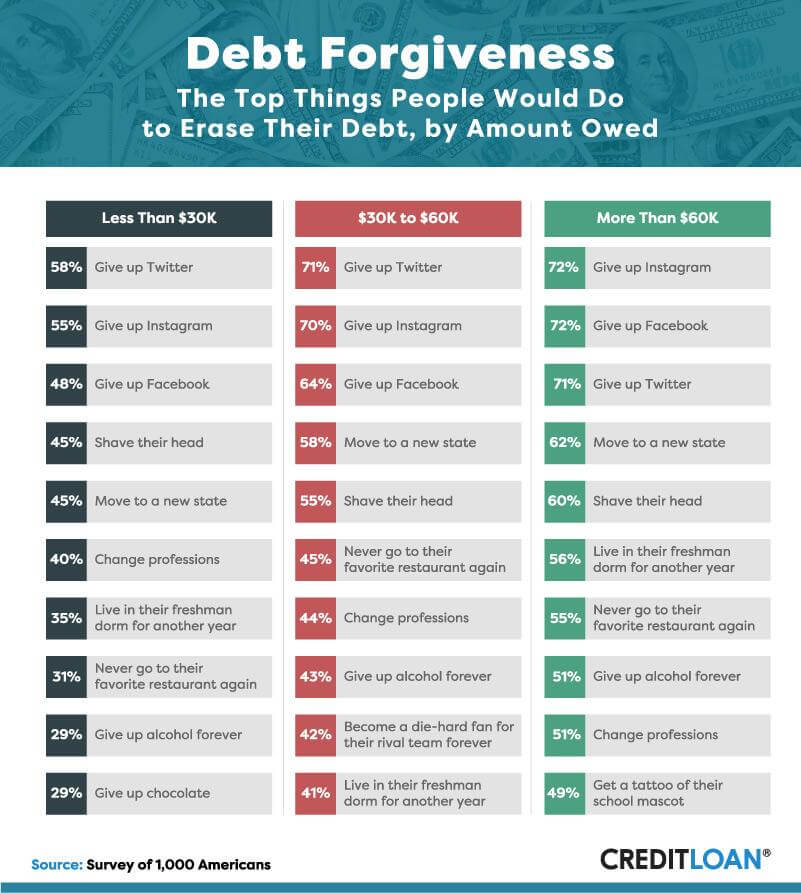 To measure just how far borrowers would go to reverse their debt decisions, we posed a range of hypothetical trade-offs to eliminate their debt. Among the first things to go for all debt ranges was social media, with a significant percentage ready to give up Instagram, Twitter, and Facebook, respectively. However, other choices produced much more reluctance, especially among borrowers with lower debt totals.

Good food and drink, for instance, were too important to part with for those with less than $30,000 in loans, though around half of those with $60,000 in debt said they’d give up alcohol or their favorite restaurant. Sixty-two percent of our most indebted borrowers also said they’d move to a new state to erase their debt, and 56 percent said they’d even shack up in their freshman dorm again.

From Regret to Real Progress

With so many Americans facing down enormous student debt, it’s no wonder that many wish they could have approached their educational expenses differently. No matter how much you’d like to rewrite history, student loan debt doesn’t have to cause you stress in the present. In fact, many borrowers aren’t aware of the many options that might make their debt totals more manageable, converting their regret to a sense of real empowerment.

At CreditLoan, we offer extensive resources to help you navigate the world of student debt. Our guides can help you secure a better interest rate, explore more flexible repayment terms, and learn about student loan forgiveness options that might apply to you — even if you're looking for a bad credit loan. For a better way to borrow, we’re here to help.

We surveyed 1,000 Americans about their college debt and feelings toward borrowing. Our measure of regret, fairness, anxiety, degree utilization, and worthiness of degrees to jobs were answered on a seven-point scale. Responses were grouped by value: 1, 2, and 3 were collected together as the bottom end of the spectrum, while 5, 6, and 7 were grouped at the higher end. All answers of 4 were not displayed, as they represent a neutral response on our scale. Because these neutral responses were excluded, the percentages reported for each group will not total 100 percent.

Feel like sharing this content on your own site? Feel free to use our findings and graphics for noncommercial purposes: We promise you won’t regret it. We simply ask that you provide a link to this page, so your readers can explore the full project.