Lured by phenomenal growth, many have started wondering if cryptocurrency should be part of their investment portfolio. Consider the case of bitcoin (BTC).

In April of 2018, MGT Capital Investments CEO John McAfee said the cryptocurrency would see $1 million in 2020.

The investors we surveyed were not quite as aggressive in their predictions. We surveyed 1,057 cryptocurrency and their opinions range from pessimistic to very optimistic. On average, crypto investors believe bitcoin would end 2018 at $9,500, possibly reaching $12,000 by the end of 2020, and wouldn't see $20,000 until 2030. 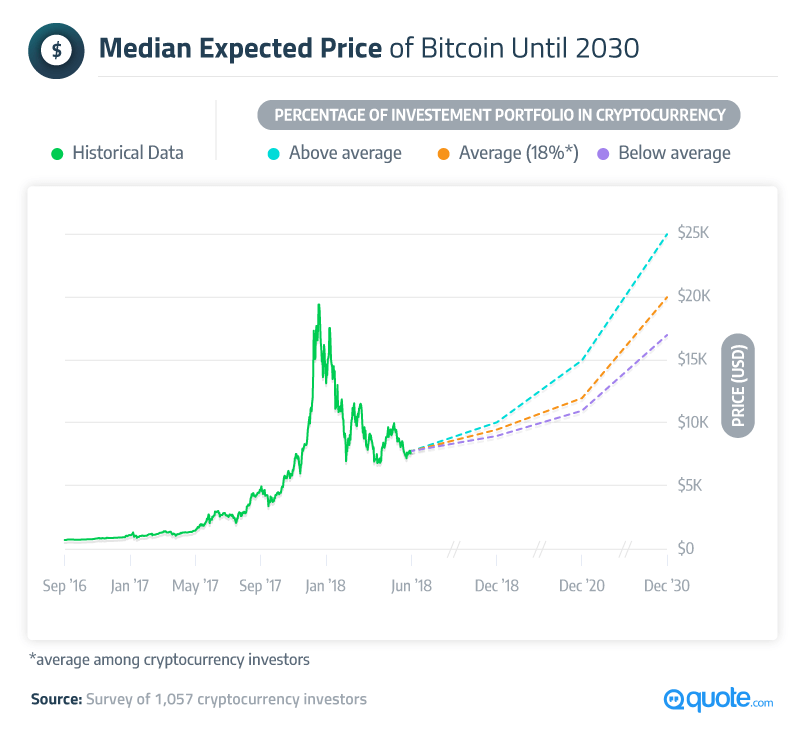 What's more, investors who held a higher percentage of cryptocurrency in their investment portfolios tended to be more bullish on the price of bitcoin. Those with an above-average crypto allocation predicted a $25,000 bitcoin by 2030, while those who held a less-than-average amount thought bitcoin would only see $17,000 by that time.

Even though bitcoin has lost some luster in recent months, the currency still outpaces the singer Beyoncé when it comes to Google searches.

There is much more to learn, so let's dig in and discuss the potential value of cryptocurrencies and what consumers might expect in the coming years.

The question often asked by people from Wall Street to Main Street is whether cryptocurrencies will become part of our everyday lives and what role it will play in investment strategies.

With all the talk and speculation on cryptocurrency, you might get the impression investors are throwing the majority of their assets into a crazy new scheme. Fortunately, that's not the case. 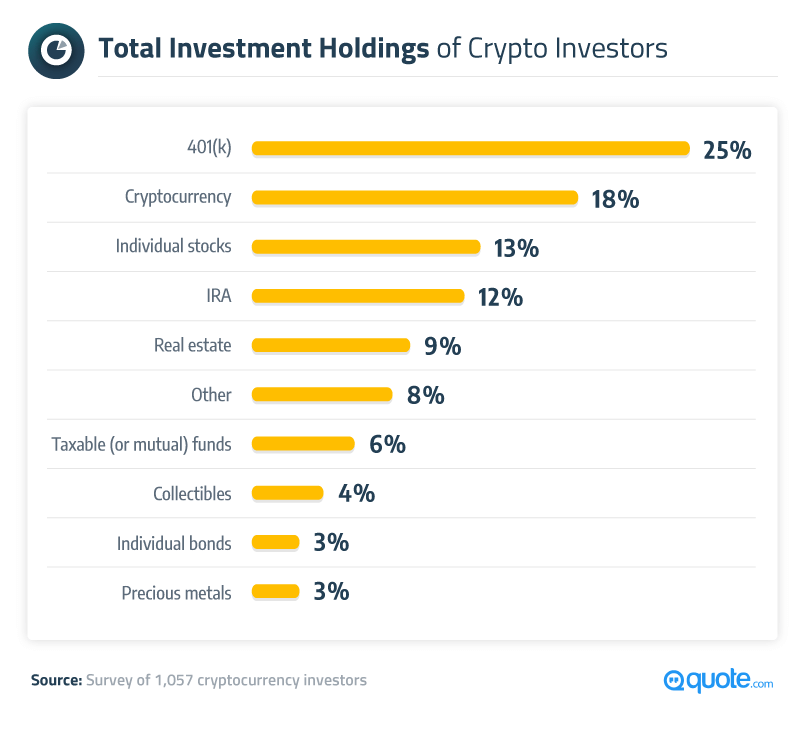 Active cryptocurrency investors in our survey are placing only 18% of their available dollars in the currency.

Although willing to invest in technology and alternative products, they lean toward more traditional investment options.

For example, 25% of their investment dollars are going into 401(k) accounts.

Financial advisers recommend putting as much as possible into 401(k) plans since growth is tax-free. Older workers have taken advantage of 401(k) plans for decades, and recent data say millennials also recognize the importance of saving for retirement.

Our participants are also allocating 13% for individual stocks, with 12% going toward IRAs. Interestingly, they are investing in cryptocurrency at twice the rate (18% versus 9%) than real estate, which many see as a safer long-term strategy.

You may be wondering if cryptocurrency investments are an option for your company's 401(k)?

The answer is yes, it is possible to include a cryptocurrency such as bitcoin in a 401(k) plan. In 2014 the IRS approved bitcoin as a commodity, but stated a custodian must be involved if used as an investment.

However, many financial professionals are still hesitant to recommend including crypto in a 401(k) plan, namely because of its volatility. Cryptocurrency products have no underlying valuation metrics, such as price/earnings or price/metrics ratios. Therefore, calculating value is difficult.

Some advisers do see an upside to including cryptocurrencies in 401(k) plans to hedge against the dollar. They are usually

One thing is certain: Cryptocurrency investments are gaining in popularity, and both individual and institutional investors are now buying them.

Bitcoin, the "granddaddy" of cryptocurrencies, remains a favorite among investors.

Over $8.8 billion has been raised for new currencies through Initial Coin Offerings (ICO) since January of 2016, but no one can compete with bitcoin's popularity.

When our survey participants were asked how they would spend $1,000 on cryptocurrency, bitcoin was first with a $418 average. 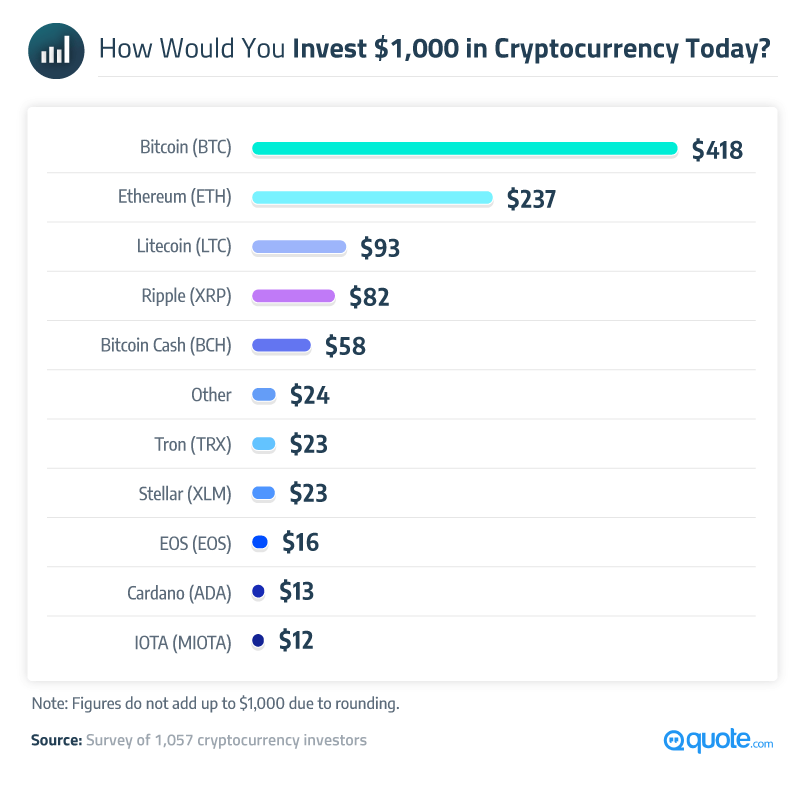 Security and accessibility are two reasons bitcoin is popular.

With a track record of over nine years with no significant failures, investors have confidence in bitcoin's security. Experts view Script, bitcoin's smart contract language, as an important security function. Plus, having an extensive network and many users is advantageous, especially given the currency's decentralization.

Bitcoin is the most accessible cryptocurrency in the marketplace. That means more exchanges, merchants, and support. Think of it as being able to find parts and accessories for your iPhone versus an off-brand phone with limited distribution.

Known as bitcoin's top rival, Ethereum prices are lower, currently trading around $500. And if one can learn anything from researching or investing in cryptocurrencies, it's a realization that all are unique.

One difference is their method of trading. Bitcoin trades in cryptocurrency.

Ethereum offers multiple exchange methods, including cryptocurrency. They also provide smart contracts and the Ethereum Virtual Machine, or EVM. Another difference is how the coins are mined. Bitcoin rewards coins, or fractions of coins, to miners. Ethereum allows miners to make a transaction fee as opposed to a share of the currency.

However, Ethereum has experienced security issues. In 2016, hackers got away with $50 million in Ether, which led to the creation of Ethereum Classic (ETC).

Others, such as Ripple (XRP) and Bitcoin Cash (BCH), show some popularity with our respondents at $82 and $58 respectively.

Industry insiders are also high on two others making the list, Stellar (XLM) and Cardano (ADA).

If you think investors are only into cryptocurrency as a "get rich quick" scheme, you may be mistaken.

Over half of those surveyed, or 51.8%, invest in bitcoin with the hopes of long-term gains. 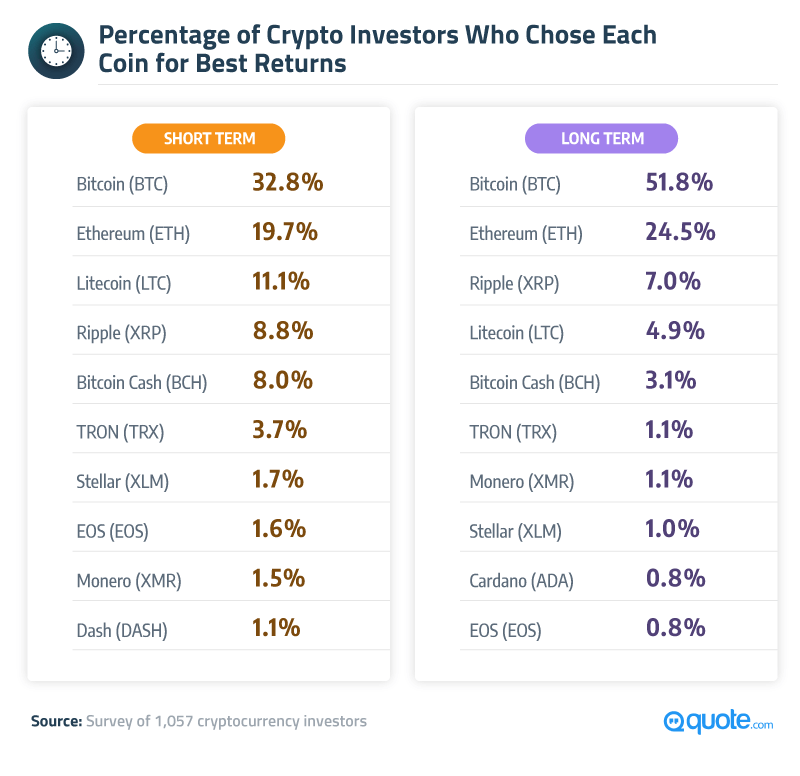 The rapid ascent of bitcoin and other cryptocurrencies naturally attracts investors looking to make quick and easy money. And some have been successful.

Crypto investors with a long-term perspective often look to the best-known coins to regain momentum and recapture some of the losses in the first half of 2018. The market faces many challenges, one of which is a lack of mainstream investor confidence.

Litecoin, another popular currency, is viewed by our respondents as more of a short-term investment by just over 11%, compared to the almost 5% that like the coin's long-term prospects.

Seen as a clone of bitcoin, Litecoin has succeeded for two reasons: namely for its persistence and routinely integrating itself with bitcoin's SegWit technology.

If safe or conservative investments are what you're looking for or need, then cryptocurrencies may not be right for you. No coin to date has demonstrated the stability of an IBM or GE. Chances are it will be years before you see "stability" and cryptocurrency used in the same sentence.

However, if blockchain – the technology behind the currencies – and cryptocurrency find acceptance within the investment community, its prospects for a more stable pricing structure should improve.

Knocking Off the Champion Remains Problematic

If we play a cryptocurrency "king of the hill" game, we begin with bitcoin sitting on a steep mountain. With any game, there are legitimate challengers and long-shot startups with more grit than ability. 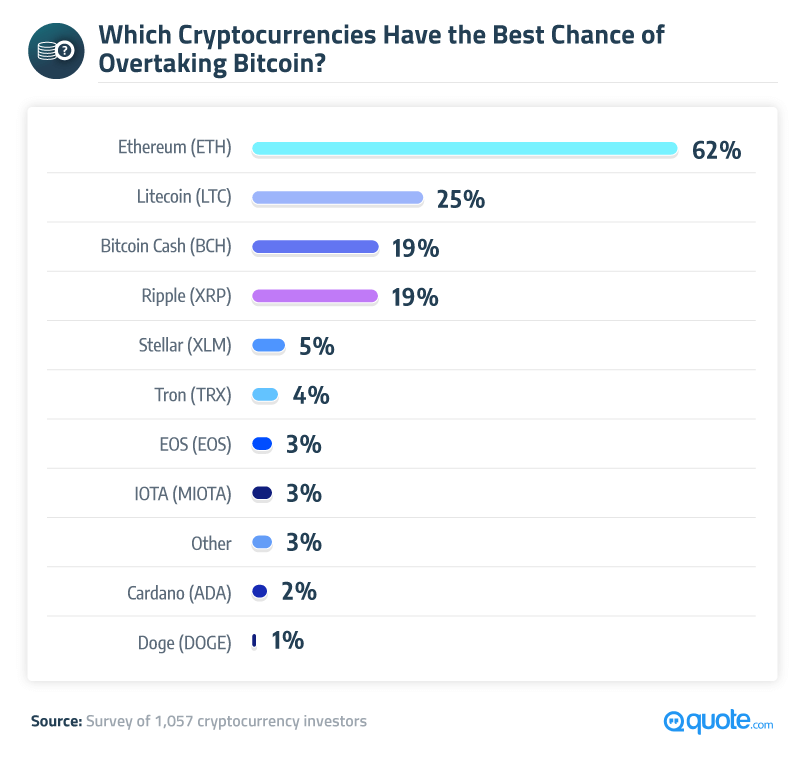 So who is best positioned to displace bitcoin? In our survey, 62% said Ethereum.

Coming in a distant third is Litecoin at 25%, with Bitcoin Cash and Ripple tied for third place at 19% each.

Ethereum and bitcoin share a commonality that keeps them atop the cryptocurrency pecking order. Both have platforms that other coins are built on, providing a considerable advantage over existing currencies and new ICOs likely to be seen in 2018.

Because bitcoin is a gateway to most cryptocurrency markets, purchasing Ethereum means most investors must acquire bitcoin first, as is also the case with other coins. Reversing the process means investors would probably need to convert Ethereum to bitcoin.

Ethereum does have some advantages over bitcoin.

First, Ethereum possesses more unique addresses. The 35 million-plus addresses Ethereum has captured represent a 100% increase in the past six months, and they are adding an average of 100,000 new addresses each day. Insiders see this as an advantage given it means more activity for Ethereum.

Another, albeit minor, advantage is the number of coins. Bitcoin is capped at 21 million coins, and Ethereum has over 92 million in circulation with no cap in place.

In short, it's hard to win the championship when you have to take two punches to your one.

How many times have you read or heard that the U.S. and other world economies might soon be a cashless society?

Some experts have espoused the benefits of not having to carry any currency for years. Even if you agree we're moving in that direction, it will probably take decades to make the switch, and those we surveyed tended to agree for the most part.

Still, 35% of crypto investors in our survey said cryptocurrency will replace traditional money in their lifetime. However, others say crypto could replace cash in as little as 10 years.

The bigger question may be how long it will take for cryptocurrency to become an accepted currency for daily purchases at restaurants, grocery stores, gas stations, and online or traditional retail stores.

And not to throw water on anyone's parade, but 41% of those same investors said it's possible all crypto coins could, at some point in their lifetime, be worthless.

Our results show that just under three-quarters of the average cryptocurrency investors are millennial males who rely on Reddit as their crypto briefing resource.

Running a very distant second were Gen Xers at 19%, with baby boomers lagging behind at 4%.

Many articles in the past few years have examined the reasons why cryptocurrency investments are attractive to millennials. One reason is the lack of government regulation.

And while millennials may find it appealing that Washington's heavy-handed authority isn't too involved in cryptocurrency investing, it is also a reason some traditional and institutional investors tend to avoid cryptocurrencies.

Even though some investors believe the cryptocurrency bubble could burst, well over half viewed cryptocurrencies as a medium- to long-term investment. Both were at 27%.

Twitter is the most popular platform for industry experts and may be a good option if you're interested in learning more about cryptocurrency trading.

Is Cryptocurrency in Your Future?

Building a long-term and successful investment portfolio involves time, financial discipline and a host of other factors. Both experts and history are correct in saying that diversification, or spreading your investment dollars over a variety of options, is the best strategy for the long haul.

Cryptocurrencies, like other speculative investments, come with a great deal of risk and investing most of your resources in any one area is never a good idea.

However, there is little doubt cryptocurrencies have staked a place as an alternative investment that may indeed be considered a mainstream vehicle in the coming years.

As with any investment, seek competent financial advice and make sure you can absorb any loss you place in a high-risk or volatile investment.

We collected responses from 2,621 Americans via Amazon's Mechanical Turk platform. 40.3% of our participants reported they had previously purchased cryptocurrency. Participants who had not previously purchased cryptocurrency were excluded from analysis. The remaining participants ranged in age from 18 to 76 with a mean of 32.5 and a standard deviation of 9.36 years. Hypotheses were not statistically tested and the data presented rely on means and median analysis only.

We don't mind if you share this information on all things crypto as long as it's not for commercial purposes. We simply ask that you give credit to CreditLoan so everyone who worked on this project can get a pat on the back.