Going "broke" isn't on most Americans' to-do lists, but given life's inevitable twists and turns, the majority of us may find ourselves close to or even beyond the theoretical penniless point.

We've all heard stories of millionaire celebrities losing everything, but what does it mean for normal Americans to be "broke"? Why do we get there, what happens during this period, and how do we emerge from it?

To understand what defines "broke" in modern society, we surveyed over 1,000 Americans and asked them how they arrived at, felt about, and coped with this somewhat taboo topic. Some of what we uncovered may surprise you.

Making "Cents" of Being Spent

Our world is getting more and more expensive. Ever increasing prices mean that wealth is harder to maintain with each passing month. Even areas once considered “affordable” have seen living costs rise, especially if children are involved. 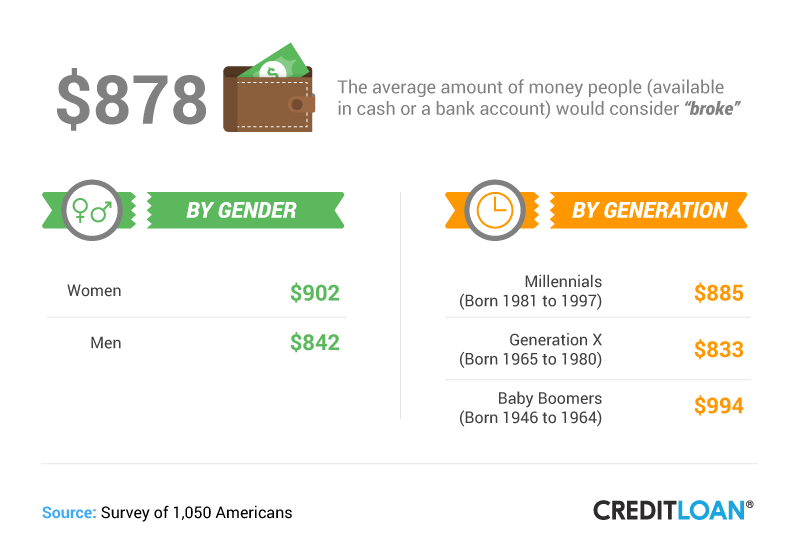 The average cost of food increases about 3.4 percent each year – and if you dine out frequently, those rising costs can add up even quicker. Compounding the swelling prices of "stuff" is the fact that wages are not keeping up with the growing cost of living. These combined factors can create serious monthly cash flow problems for many Americans.

Add in a couple dozen Uber rides, frivolous Amazon Prime purchases, and Groupon splurges, and you've got a recipe for a depleted bank account. And while most of us have felt a money crunch, especially when just starting out, at what point are you actually considered "broke"?

Our survey revealed, on average, people considered having $878 available to them in cash or a bank account to be "broke." Close to $900 in the bank might seem far from destitute, but considering the average national rent is $1,405 that little nest egg can evaporate quickly, especially if you're living on your own.

And whether they started that way or ended up there, the vast majority of Americans have had a brush with financial straits at some point in their lives.

86% of people surveyed said they'd been broke in the past or were currently broke.

While such a high percentage can seem scary, we can learn from past missteps. Perhaps the most important fact is that it's usually not just one thing, such as a new car, that drives us to the poor house, but a lack of overall budgeting that sends most into dire monetary straits.

The specific reasons Americans went "broke" were surprising and varied by generation and gender. Food seemed to be a major culprit of financial strain. The good news is that most people seem to be satisfying their hunger, but the bad news is that it was the top reason millennials and Gen Xers found themselves insolvent. 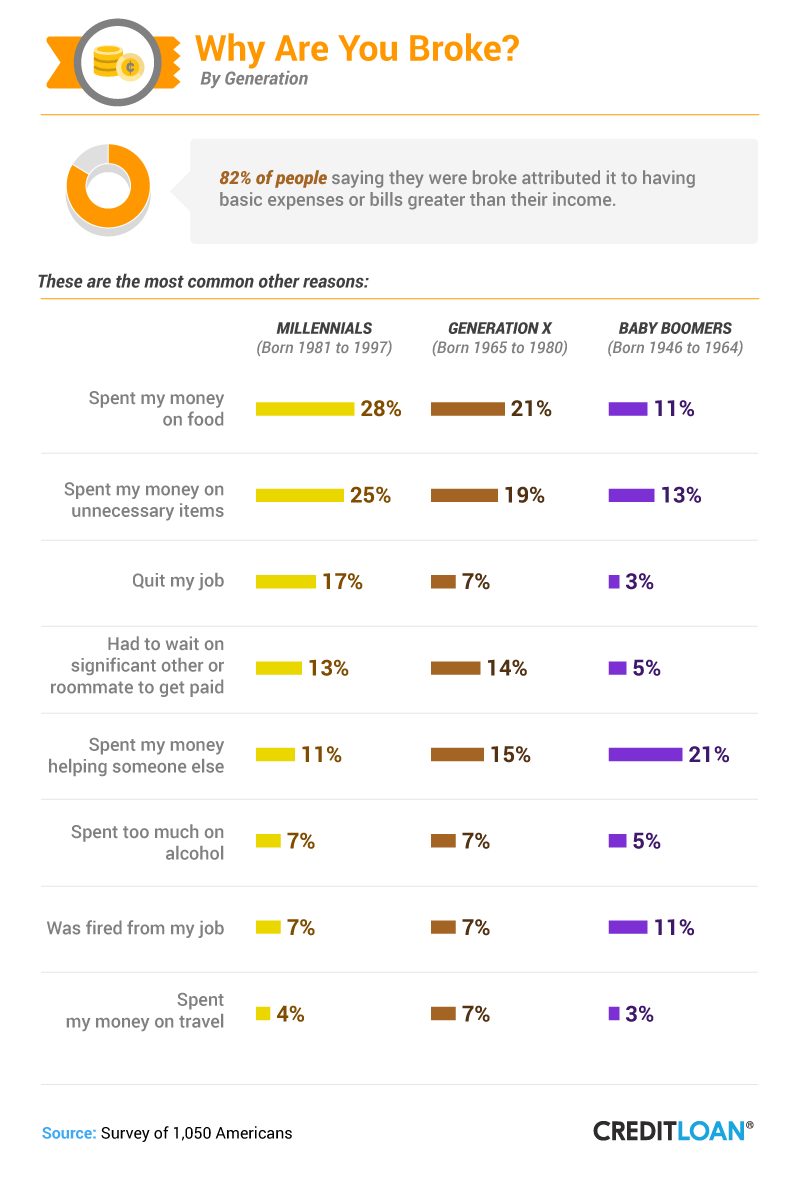 These results relate to data from the U.S. Bureau of Labor Statistics, which found food expenditures were the third-largest expense behind housing and transportation for Americans overall and accounted for nearly 13 percent of average annual spending.

Millennials were the most likely generation to be broke because they overspent on food or items they didn't need or quit their job.

What's more is that millennials, a generation obsessed with organic, trendy, and high-end prepared foods like avocado toast and acai bowls, were the most likely to go "broke" from overspending on food. A late 2016 study by the U.S. Department of Agriculture revealed that the tech-savvy generation spent a whopping 44 percent of their food dollars on dining out.

Baby boomers' generosity was their downfall as 21 percent of respondents went "broke" helping someone else, and Gen Xers were the most likely to get into financial trouble waiting for their significant other to get paid, they also shed the most dollars by spending too much on food, buying unnecessary items and spending on someone else.

Travel expenditures ranked least problematic across all generations, especially for millennials who doled out an average of $4,594 on vacations in 2017.

Men were more likely to be broke because they quit their job or spent too much on alcohol.

Women were more likely than men to be broke because they overspent on food or had to wait for their significant other to get paid.

Nearly a quarter of both genders attributed financial stress to spending money on items they didn't need. 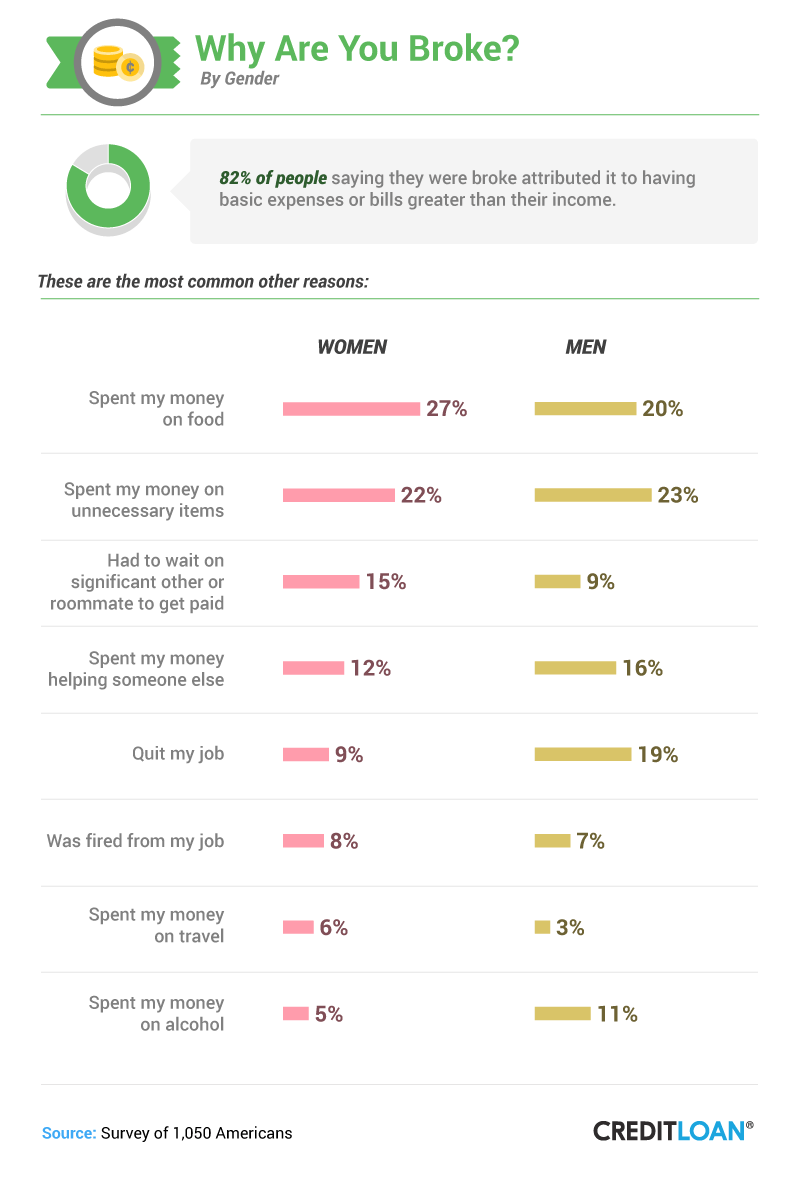 Twice as many women than men blamed their financial woes on travel costs, but it was still the least influential reason for being "broke," next to alcohol.

Fake It Till You Make It (Or Maybe You Shouldn't)

WA friend asking to borrow money, or watching someone have a credit card declined are two instances when we might make assumptions about a person’s finances. But these aren’t the only times we pass judgment.

We may also view people who don’t discuss their finances or skip out on social events as fiscally challenged. Strict budgeting and working extra job(s) were also viewed as monetary stress indicators, even though they could be the very things that make someone wealthier.

We live in a world where material possessions can act as a barometer of affluence, even if that stuff is actually wreaking havoc on your finances.

But if you're not too worried about how strangers perceive you, it might not be a bad idea to employ traits that others view as signs of poverty (i.e. extra work and strict budgeting) to actually increase your savings. 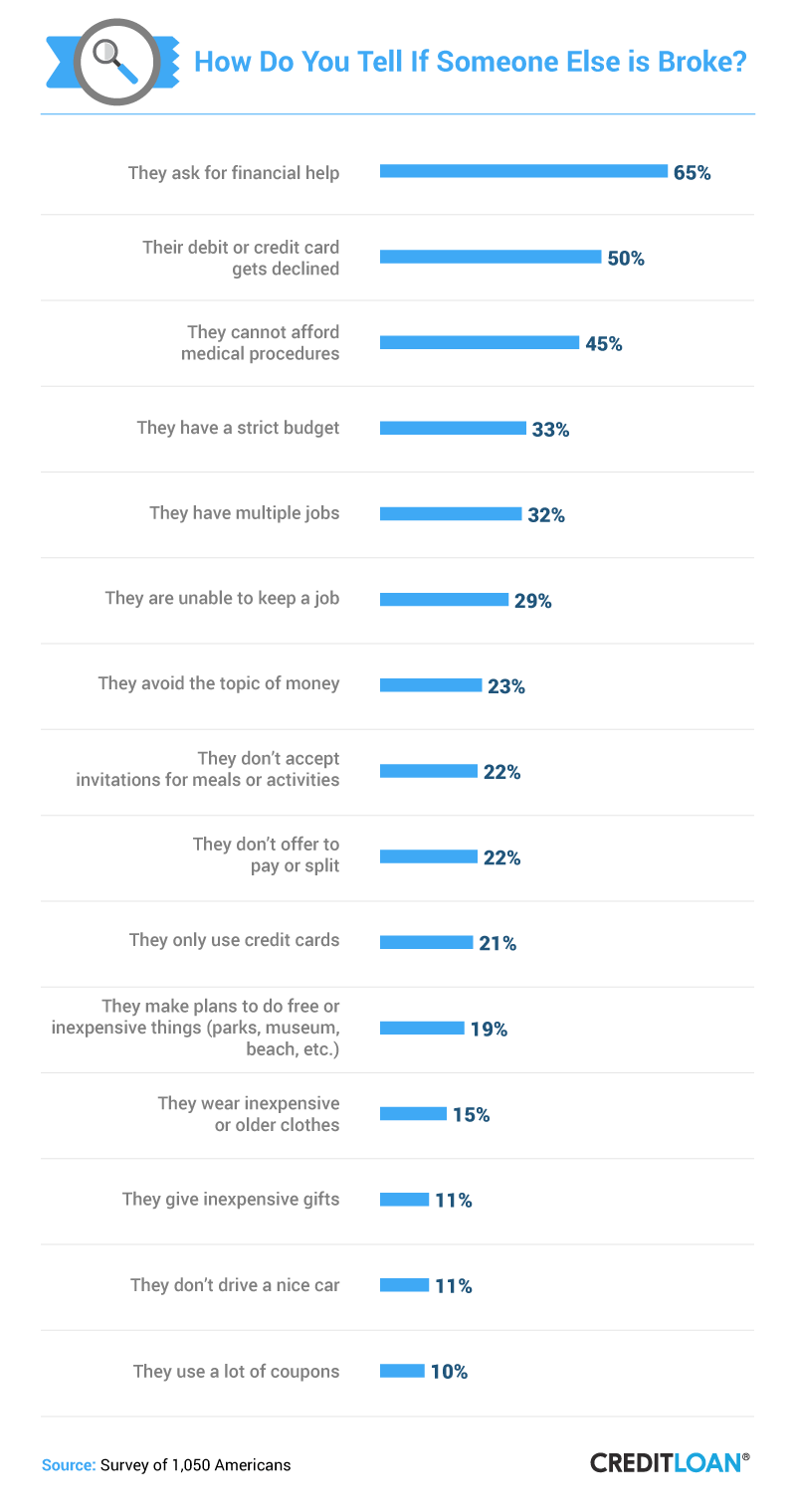 A truly carefree lifestyle may deceive others, but it can take a real toll on personal finances.

Nearly half of respondents who lived by the YOLO mantra ("you only live once") were currently "broke." Conversely, 72 percent of those who lived by the centuries-old "penny" savings mantra had never been "broke." 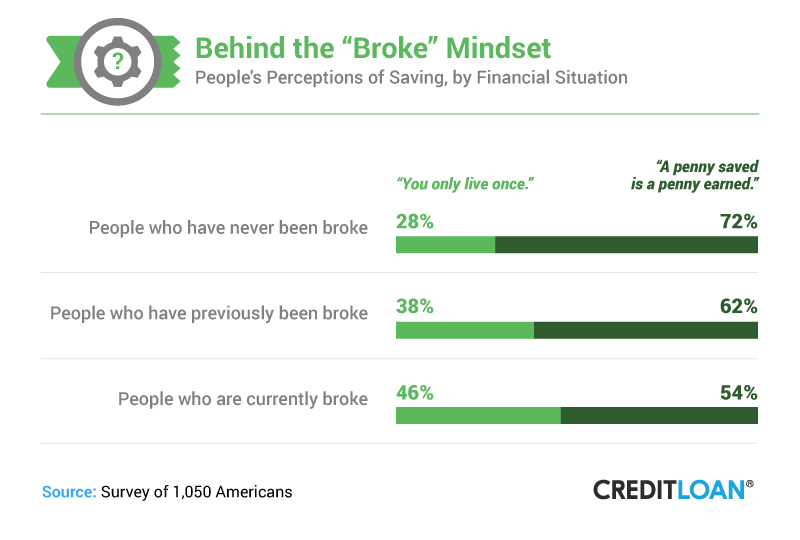 Perception and reality are two very different things when it comes to your monetary status. An outward YOLO and behind-the-scenes budgeting may be your best bet.

The Effects of Being "Broke"

We all know how tough it can be to crawl back from a financial setback, but what's actually going on in the minds of someone up against the proverbial financial wall? How do "broke" priorities shift compared to times of plenty?

People who consider themselves broke were twice as likely to plan on purchasing cigarettes as those who are not broke.

Simple survival is on most of our minds day to day, but while 29 percent of "never broke" folks were ready to throw down at the bar or club, 18 percent of those currently in dire straits were looking to purchase cigarettes, perhaps to cope with the added stress. 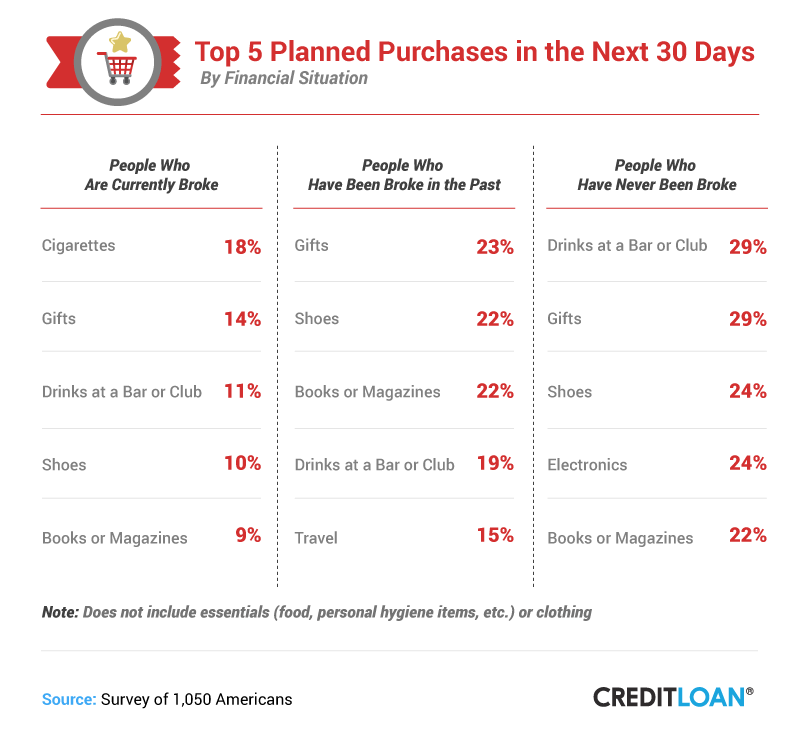 Twenty-eight percent of people who had never been "broke" found it a useful scapegoat for canceling plans. The vast majority of those who had been or were now in fiscal trouble weren't afraid to back out of plans due to their situation. 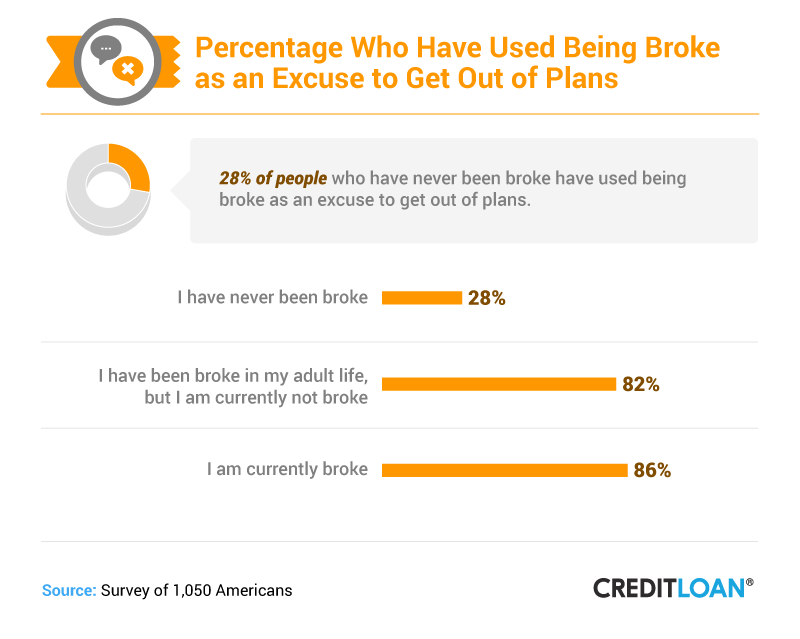 Getting Back Into the Black

There's a myriad of reasons why people go "broke," from overspending on food and other unnecessary wants to a decrease in work hours or a job loss completely. While credit can enable us to access funds in a pinch or cover unexpected expenses, credit cards should be utilized responsibly.

Across all generations, reducing spending was the most common way respondents tried to get back on their feet, followed closely by a big reduction in dining out. 58% of Millennials, who happen to spend nearly half their food budget at restaurants, were willing to give up eating out.

Baby boomers were the most likely generation to try waiting out being broke.

While not exactly proactive, waiting was also an option, as 21 percent of the youngest working generation were willing to hold out for a miracle. And even though they have the least amount of time left to work, baby boomers were even more willing than millennials and Gen Xers to wait for things to change.

Almost none of our survey respondents were willing to cancel their cellphone or internet plan to save money.

But even with their backs against the wall, hardly anyone surveyed was willing to cancel their cellphone or internet plans to save money. Five percent of millennials would drop the cell service, but none would cancel internet. They may be on to something, as email remains the most popular form of business communication and, if needed, calls can be made through apps like FaceTime, WhatsApp, and even Facebook. 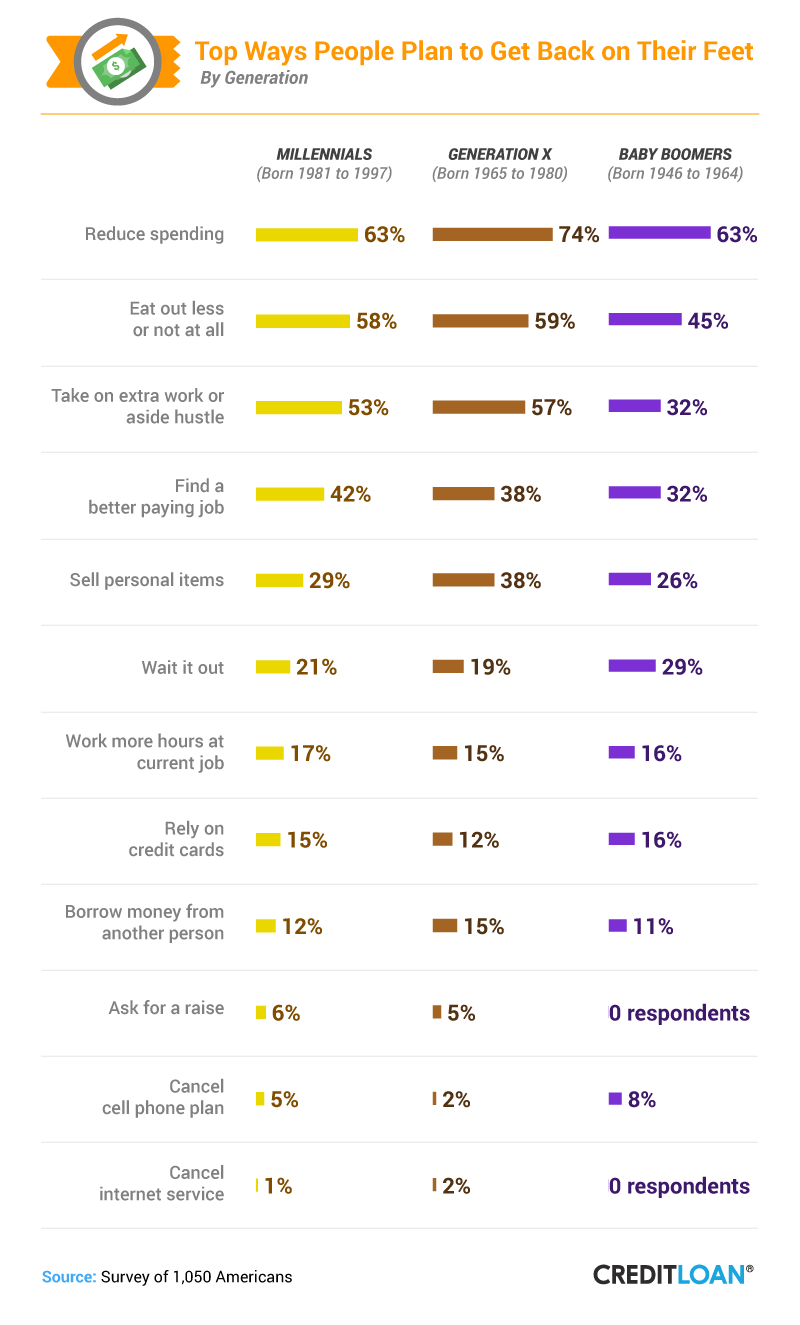 When we split the survey by gender, a few of the same trends emerged, but there were a few standouts. Women and men both ranked spending reductions, dining out less, and taking on additional work as their top three ways to get back into the black, but women did tend to cut spending more aggressively than men.

Women were more likely to shake things up after work by selling personal items or taking on a side job. 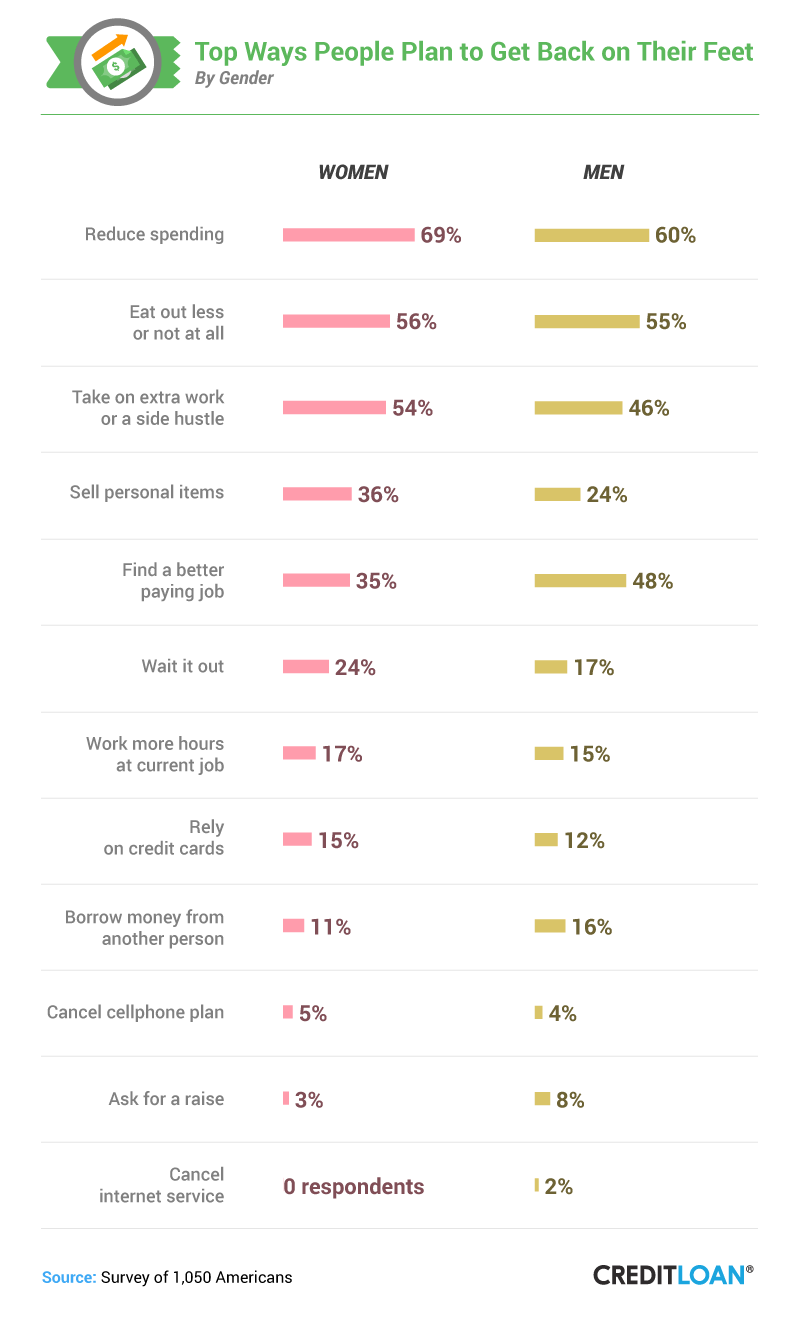 Defining "broke" for the average American is one thing, but how do finance professionals, business moguls and scholars define, deal with and avoid it? We asked seven experts the same questions posed to the average consumer, here's what they had to say:

Staying out of the poor house doesn't have to mean excessively long workdays and zero fun while living in a box on a steady supply of ramen. Sure, there may be some sacrifices early on, but if you plan right, those sacrifices will pave the way for prosperity and increased leisure later in life.

Whether you're "broke" now or just want to avoid it completely, you might start by creating a budget you know you can stick to that also allows you to save and still enjoy the things you love. And since you're the one in charge of your financial future, it pays to be informed and use every financial tool and trick at your disposal.

Used properly, credit cards can help manage cash flow and even give you rewards or cash back. At CreditLoan, we can help you get the most out of your credit card options, provide tips and tricks on how to manage your money, and include resources for Americans looking to turn their credit history around. Don't let a bad credit score or a temporary financial setback stand between you and your goals.

We collected 1,050 responses from paid American survey takers via Amazon's Mechanical Turk platform. 48.4 percent of participants were men, and 51.5 percent were women. 56.9 percent were millennials, 28.2 percent were Gen Xers, and 13.3 percent were baby boomers, with the remaining 1.6 percent falling outside those age groups. Participants ranged in age from 18 to 86, with a mean of 37.2 years and a standard deviation of 12.1 years.

Participants were excluded from gender/age group analysis if they abandoned the survey before answering relevant demographic questions or if they failed an attention check question. Hypotheses were based on means and not statistically tested. As such, this content is purely exploratory, and future research should approach this topic more rigorously.

If you find this information valuable or interesting, feel free to share with your readers for any noncommercial purposes. All we ask is that you attribute CreditLoan and link back to this page for recognition. If you wish to use any copyrighted material from this page or site for purposes beyond "fair use," you must obtain express permission from CreditLoan.